However, you can still enjoy beautiful snow scenes throughout prefectures along the Sea of Japan even on and after Risshun. In addition, such snow countries offer you a wide variety of snow-related events as well as their unique excellent drinks & food.

Just for a moment, I would like to share topics relevant to snow with you, extending my legs into the warm 炬燵or Kotatsu, a low, quilt-covered frame with a heater inside and sipping warmed sake.

I have sort of nostalgic feeling towards snow.

This is due to two things; in my teens I occasionally happened to meet the old school friend in her Kimono with an oiled - paper umbrella in her hand on the way back home on snowy days; my old house was located near the switchyard where oil was lit to warm up switching points of railways on snowy days and white curtains of snow against the dark sky was lit up by steel towers of light. So every winter I look forward to having a snowy day. People living in the areas along the Japan Sea Coast, on the contrary, should be fed with snowfalls, occasionally causing a lot of trouble including traffic paralysis and even collapse of houses.

About 50 % of Japan in winter may be covered by the snow, with a striking difference between Pacific coast and the Japan Sea coast: the more we enjoy the fine weather in the Pacific area, the more they suffer from heavy snowfalls in the Japan Sea area. It is due to the geographical feature of the Japanese archipelago and climates.

It creates high pressure system which blows the cold north wind, absorbing humidity on the warm current running along the coastline of the Sea of Japan from Hokkaido to Central mainland. The wind freezes into snow, dumping heavy snow along the Japans Sea, before hitting and passing over the range of high mountains running through the middle of the main island like the spine. Then the cold and dry wind blows over the ridges into the area along the Pacific Ocean. Therefore, people along the Pacific Ocean enjoy fine and dry weathers during the winter.

Despite great nuisances by heavy snowfalls, people in the snowy country may enjoy something which people in the Pacific zone miss. A visual contrast between is depicted in the very beginning of the novel "Yukiguni ", by Kawabata Yasunari, a 1968 Nobel Prize winner. It details charms of the snow country including spring spa, quality sake, snowy scenery, local winter events, warm-hearted hospitality.I am sure that snow gives a lot of fun to international visitors likewise.

For example, Day trip to Mt. Fuji & Hakone or Nikko Tour in February or March, may allow you to experience snowfalls during traveling. Please look at snowflakes on your palm under your magnifying glass or by narrowing your eyes to see a wide variety of snow crystals. Even all of them are on hexagon in shape, differing each other by temperature and moisture in the ambient air, and roughly classified into two; columnar and plate. The reason for forming in hexagon remains unknown yet. Enjoy an art of nature!!

What do we specify falling snow in Japan ?

1. Ball snow: In the beginning/ending of the winter it will snow and most of them will be seen along coastlines.

2. Flour snow: can be seen at the time of snowstorm, powder-like.

3. Ash snow: is common snow, flying lightly in the air like ashes.

4. Feathery snowflakes, will snow in warm place with much rainfalls.Same as Boran-yuki.

Likewise, accumulated snow is classified into 6 :

2. Koshimari-yuki, new snow will stiffen a little. Several days have passed since it snowed. Crystals destroyed into drops.

3. Shimari-yuki, Tightened snow. It is too hard for a shovel to stand in it.

4. Zarame-yuki, New snow or tightened snow melt into one containing their water.

5. Shimozarame-yuki. Snow with frost, Shimari-yuki will be frozen to produce frost inside. It is very rare style. It can be seen in low-temperature district such as Hokkaido.

6. Ko-shimozarame-yuki, snow with smaller frost inside. 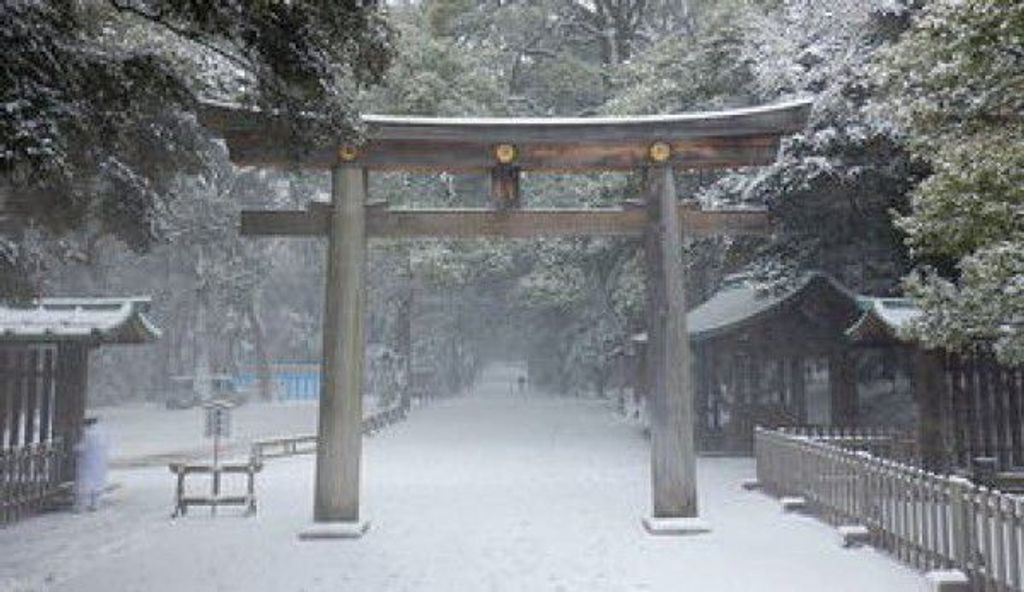 Japanese have deep feeling for snow. So snow has been composed in Tanka, Japanese poems of thirty-one syllables, Haiku, Japanese poems of seventeen syllables as seasonal theme of a lot of poetry, and in novels as subject of novel for many centuries.

Here is a popular children song "Yuki, or snow", sung by 2nd grade pupil of primary schools in Japan, which reads literally;

It's going to snow and has lain on more and more.

Mountains and fields've been covered with cotton caps,

Dead trees all have come into white flowers.

It's still falling and will never stop falling.

A dog 's joyfully running around in the garden,

A cat 's rolling up on the kotatsu.

"Jizo with caps on their heads"

On a day before New Year’s holidays by lunar calendar (around middle of February by solar calendar), it was snowing heavily in a village. An old man went to the town with a full of woven hats of rushes on his back to sell them to earn money for New Year days. However, he did not sell all of them. To make the matter worse, it apparently would never stop snowing. So he decided to go back home. On the day in such a heavy snowfall, he managed to reach the ground of a temple in his neighborhood to find several standing stone images of Jizo. Even in the very cold climate, they did not wear any padded garments and were fully covered with snow up to their breasts.

Cleaning off snow on their heads, he put caps on their heads one after another, saying "Oh! They must feel very cold. Let me put caps on their heads to warm up." Jizo looked happy. "Well done, well done." he told to himself. Then he went back home. He told the old wife, "Sorry, I could not sell caps at all. I dedicated all of them to Jizo". She smiled and told him " You did a good thing. We can manage to spend New Year Days without any money. At night on that day, there heard some strange sounds outside. He said, "Who came here?" She said, "That is sound of dropping snows because it is snowing heavily outside tonight. No worry. Let’s go to bed soon." Next morning, he opened the door and was surprised to see a lot of delicacies for New Year Day placed at the entrance. He told her, "Come down here to see these. A lot of delicacies. I wonder who brought these. She said to him, "To follow along these footprints on the snow ground, we can see who it was. "Yes, you are right. Let’s go." After a while, they found steps gone where stone images of Jizo on whom he put caps yesterday stood. "I see it. Jizo brought gifts to our house. Thank you, thank you.", he said and bowed to Jizo. "Yes, we are happy." She also was very delighted and put her hands to bow to Jizo with him.

There is a saying that a place, where it snow heavily and cold, produces quality rice,and quality sake as a result. So in any snowy country, you never miss quality sake. Another saying is that heavy snowfall indicates bountiful harvest of the rice for the year, because a snow country satisfies all conditions to produce high-quality sake, including cold weather, clean air and traditional technology of sake brewing; the cool water melted from fallen snow in mountains cultivates good rice as well as produces fine water. Air and water in snowy countries has less unwanted bacteria thanks to cold weather. In addition, craftsmen who have taken over sake brewing technology for centuries work very hard in snow countries.It is said that there are more and more fair and beautiful ladies thanks to such beautiful water and rice. 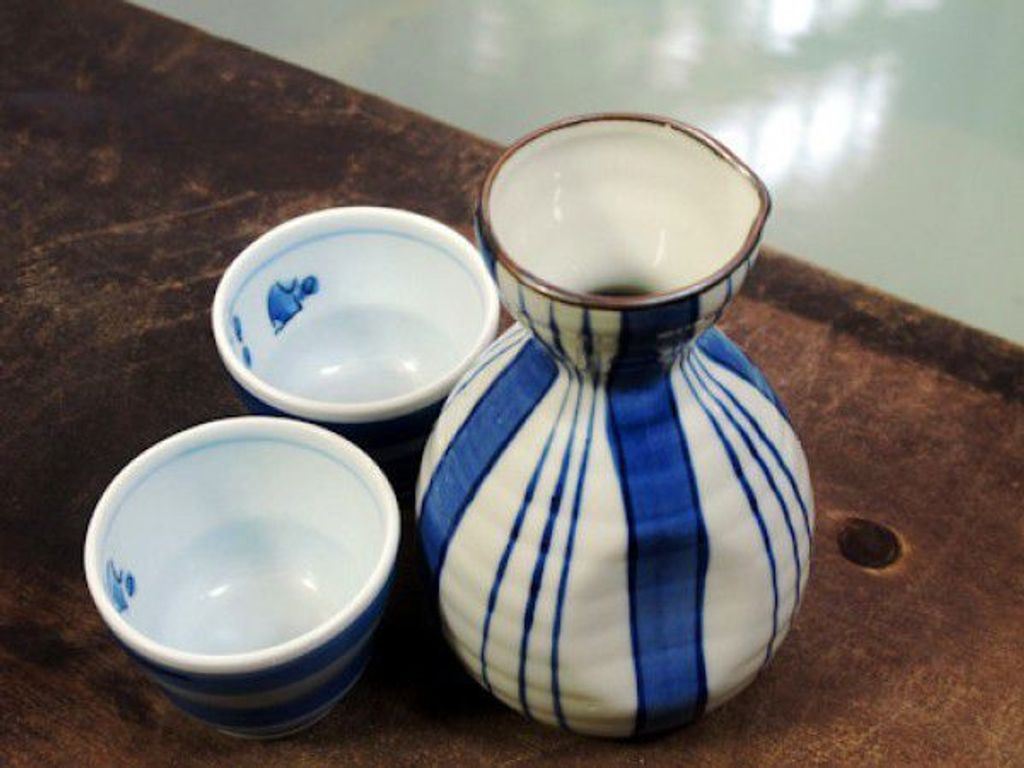