As you know, Hiroshima is now internationally known as the first city destroyed by the atomic bomb ever used in human warfare.  On June 20 I took an American to Hiroshima Peace Memorial Museum.  This museum features a wide variety of exhibits such as belongings left by victims and photos that portray nuclear holocaust. And I watched 4 paper cranes that President Obama placed on May 27. 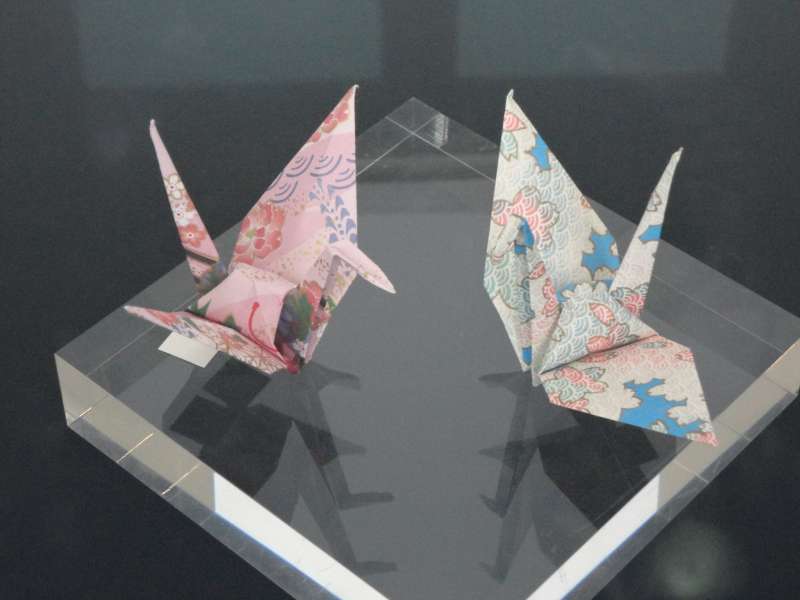 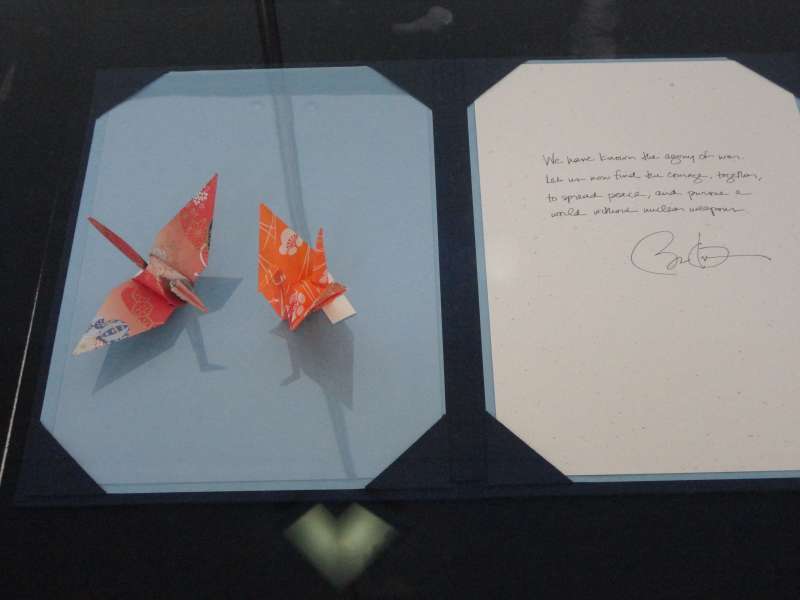 There is Children's Peace Monument in Hiroshima Peace Memorial Park.  You can see a girl lifting a paper crane towards the sky.  The girl who was model for this statue was exposed to radiation in the bombing of Hiroshima when she was 2 years old.  Her name is Sadako.  One day, in the hospital, she heard that folding 1,000 paper cranes would make her wish come true.  She began folding papers in prayer for getting well.  However she died of leukemia at the age of 12.  This story became widely known not only in Japan but also around the world.  Recently as many as 10 million paper cranes have been sent from around the world annually.  Therefore Obama followed this. 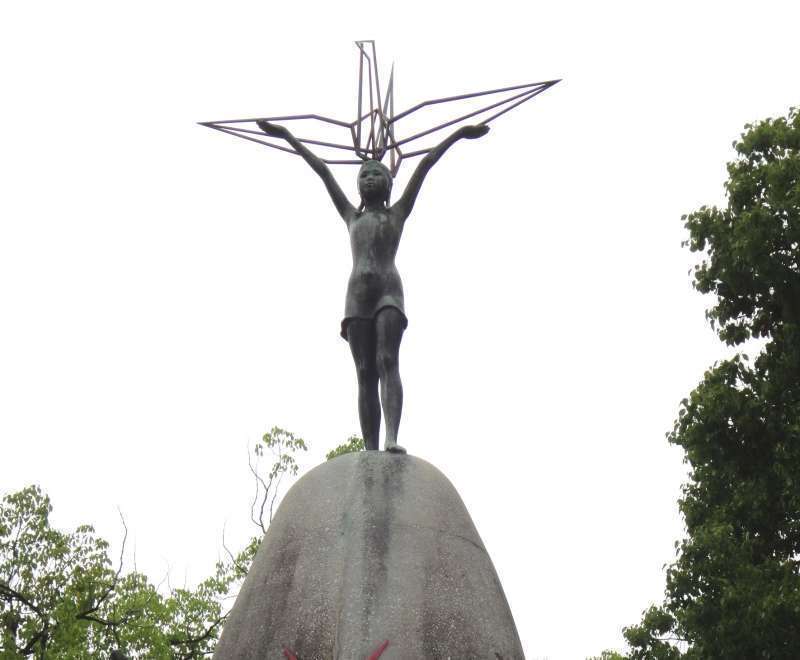 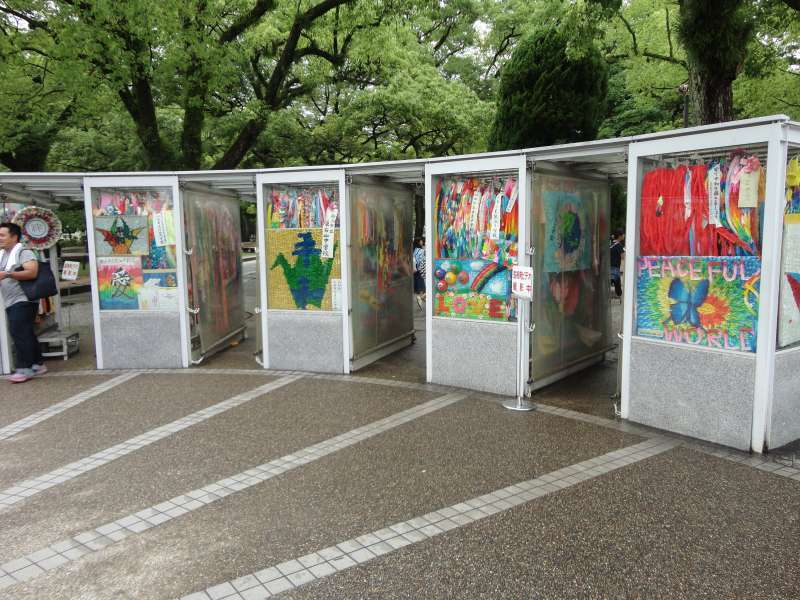 I wish for "World Peace."

It is Peace Bell.  On the surface of the bell beated , the borderless map is carved in relief. 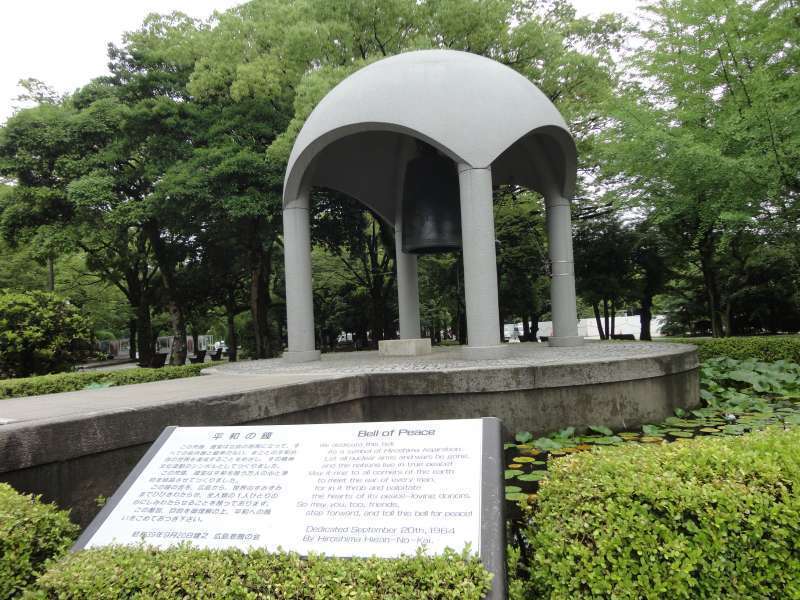 It is Flame of Peace.  The light lit up in 1964 has been keeping on burning until nuclear arms are eliminated from the world. 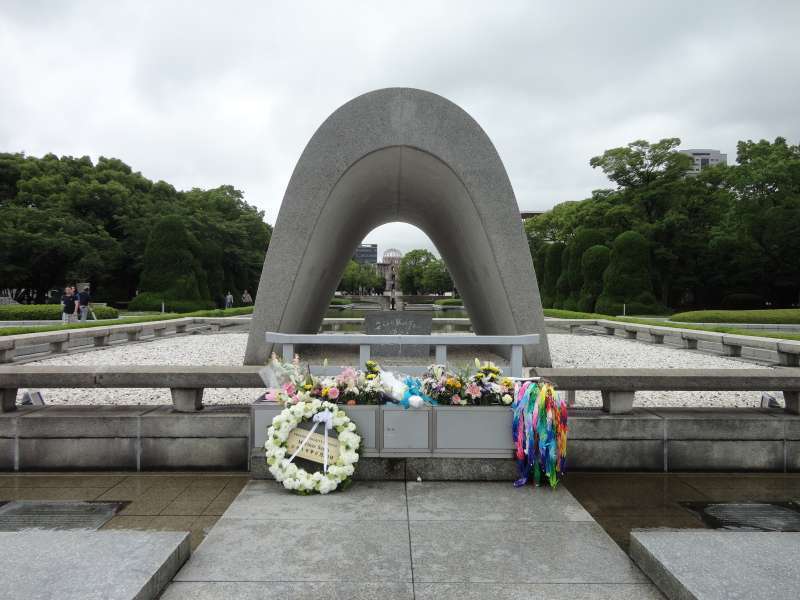 As for the tour of Hiroshima,  please refer to Hiroshima Atomic Bomb Dome and Miyajima. 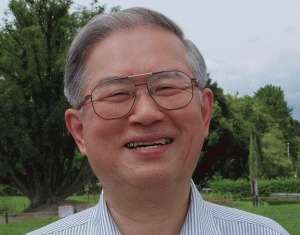 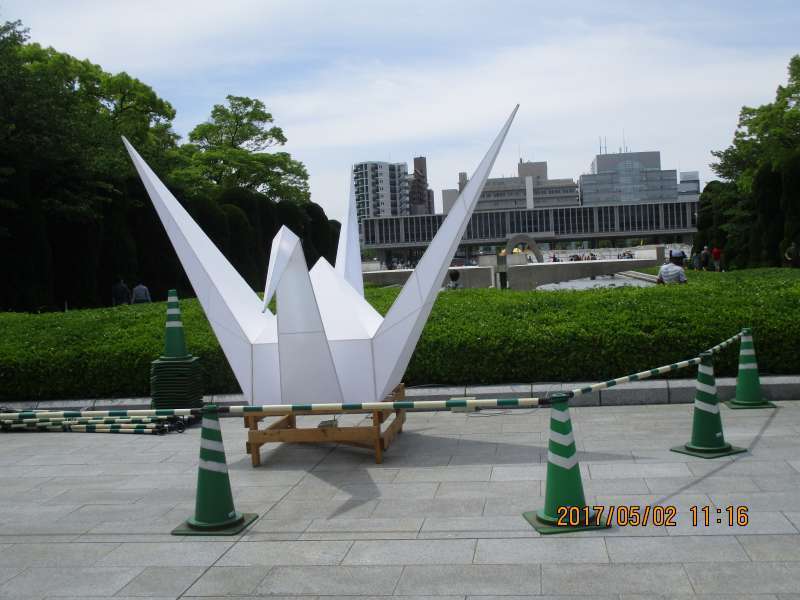 The Reopening of the Hiroshima Peace Memorial Museum

by Hideo
Four Regular Exhibits in the Museum Hiroshima Peace Memorial Museum reopened On April 29 2017.  Now the east building consists of four re... 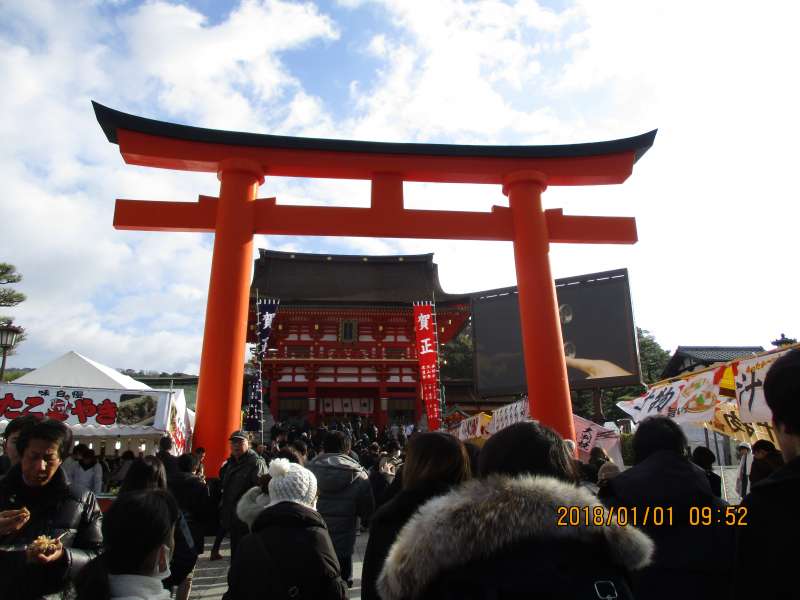 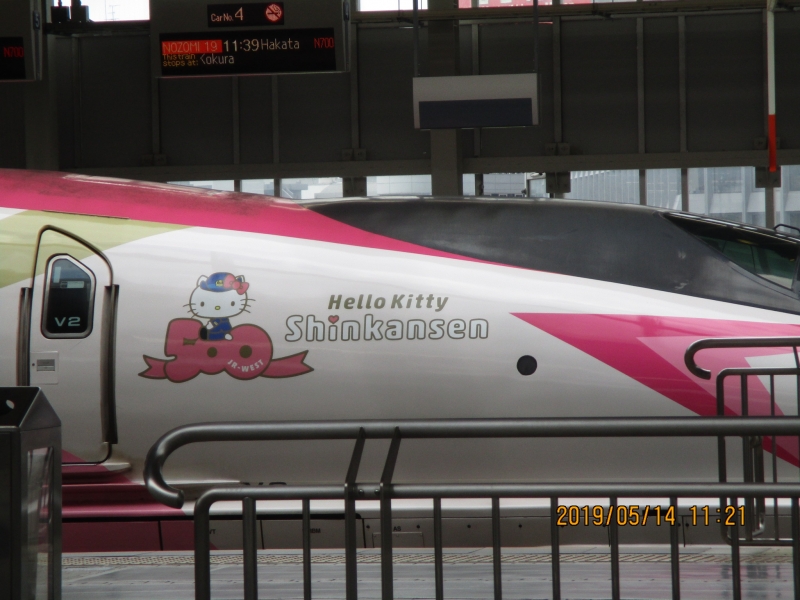 by Hideo
From May 14 to 17  I took 6 guests from Hongkong to Kansai district. Osaka Tour When I picked guests up in the platform of Shin-Osaka sta.... 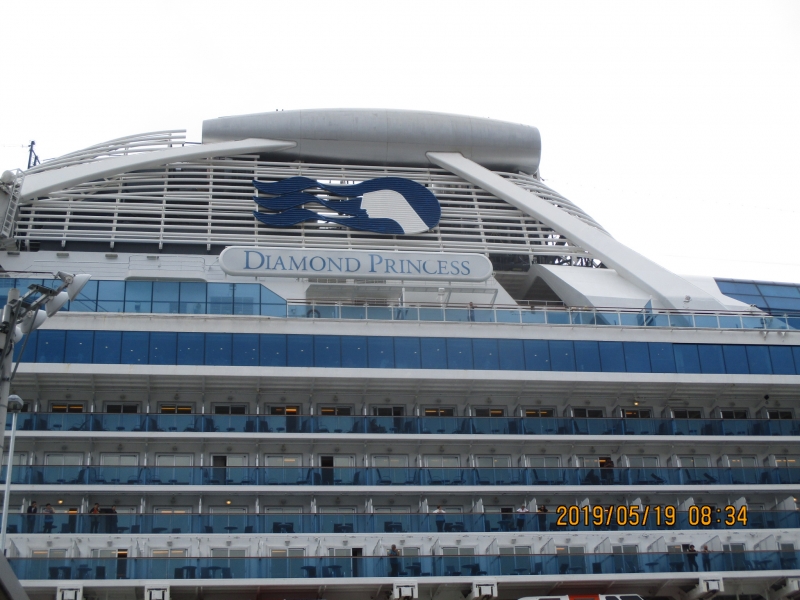 by Hideo
I took 20 guests from Poland on Diamond Princess to Kochi, Hiroshima, Matsuyama, Miyazaki and Kobe from May 19 to 22. 【KOCHI Tour】 I too... 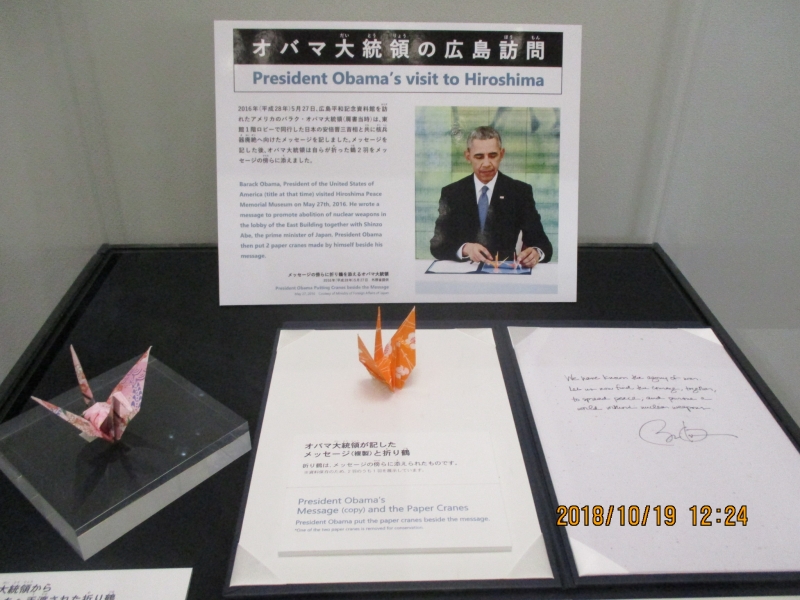 by Hideo
Atomic Bomb Dome and Museum On Oct 19th  I picked up five guests from USA at the port of Itsukaichi in Hiroshima to Peace Memorial Park and... 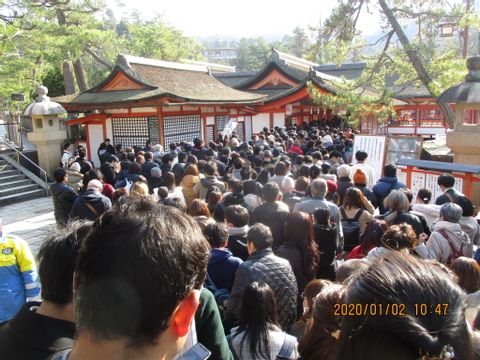 by Hideo
I guided 3 guests from USA to Miyajima on Jan 2nd 2020. Cultured Oyster We take ferry to Miyajima. We can see a lot of oyster farming boar...

Plan your trip to Hiroshima with Hideo

Sir Hideo is great we finished all the itineraries as planned and very patience with my 13 pax group of tourists from the Philippines.Very informative and accommodating. Definitely will recommend you Sir Hideo see u next time.. Thank you very much
read more

Communication with Hideo was very good. He was organized in laying out plan for our 5 hour tour. We were happy with his service in guiding us through the various sites.
read more

Hideo took us from OsK to Kyoto. He was a knowledgeable guide. English was pretty good and his organization of the day very helpful
read more

“ He was knowledgeable on the sights we visited. ”

Hideo did a remarkable tour for us. I would recommend him to anyone visiting Japan.
read more

Mr Hideo was on time Extra mile take us to different place even not in the itinerary Very clear time and cost for train, subway each places We’re very highly recommend Mr Hideo
read more

We had a wonderful time exploring Hiroshima and Miyajima. Hideo was a great guide and kept us on schedule. We loved experiencing Miyajima island it was very special and beautiful. He gave us lots of local information and insight into the area. He was able to find us a wonderful, traditional lunch. Although it was raining we had a great time exploring and learning with Hideo.
read more

Hideo was a very nice and informative guide on our fast paced one day tour of Hiroshima. He got us into one of the best spots for lunch, was very knowledgeable about the peace memorial park and we had a gorgeous afternoon with him at Miyajjima - thanks Hideo!
read more

“ A Sensational Day Out ”

We had Hideo as our guide for a Hiroshima Tour. We were staying at Osaka and he picked us up at our Osaka Hotel and directed us to the Shinlansen fast train by local train. This was absolutely stress free and I would recommend it. We had Hideo for close to 12 hours from our Hotel and back. This made things very easy. His English is good and he had excellent knowledge. We were a group of 8 and he ...
read more

We enjoyed touring the Shihmizu area with Hideo. He was waiting for us when we got off the ship and took us to many places. Our only suggestion for the future is that because he is rather soft-spoken a microphone and speaker would be helpful as it was difficult to hear him in the back of the van. Other than that we wholeheartedly recommend him
read more