The Great Buddha statue in the ancient capital of Nara, western Japan, has been cleaned in an annual mid-summer ritual since 1964, the year when the 18th Tokyo Olympic Games was held.

The 15-meter-high statue at Todaiji temple is dusted off every year on August 7th. This is to prepare for the Bon festival, when people pay respects to their ancestors.

Priests conducted a ceremony to temporarily remove the Buddha's soul from the statue.

About 150 priests and workers then climbed onto the statue's hands, knees and head to dust and polish. Some were raised in baskets suspended from the ceiling of the hall housing the Buddha so they could clean its face and shoulders.
The cleaning work began at 7 o'clock and the statue was clean in a little more than an hour.

I woke up at 5:30 and visited Todaiji Temple at 7:30.   Many people including me visited the temple to watch it.
THis is the first time that I've seen the process and was really impressed.

Generally housecleaning is held at the end of the year but it might cause accidents for hands to stick to the statue below freezing in winter.  That's why the ritual has been held on August 7th before the Bon Festival.
(reference sited : NHK World) 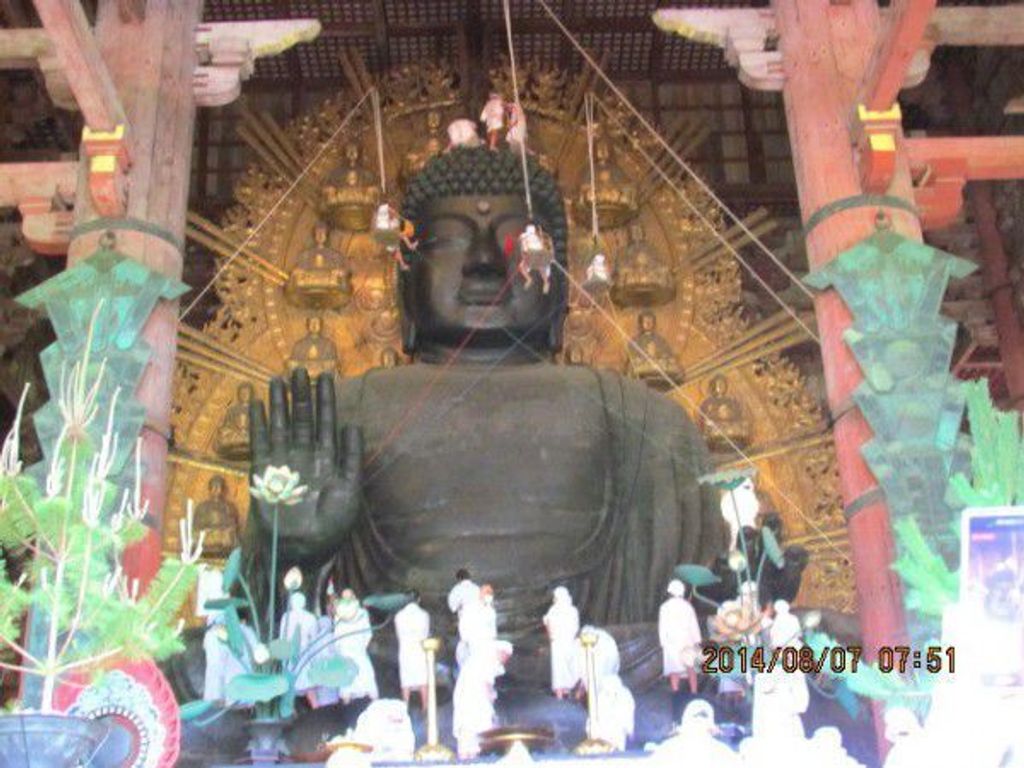 If you want to travel Nara, please refer to The Ancient Capital of Nara : Todaiji Temple Kasuga Shrine and Kofukuji Temple.

Please watch the video if you would like to know how workers clean the great image of Buddha.

Please take the video at the bottom. YAKUSHI-JI  EAST  TOWER was built in 730.  It is one of the three oldest pagodas in Japan.  It keeps good bala...

This year (2021) cherry blossoms have begun to bloom about 9 days earlier than usual. I visited popular scenic spots for viewing cherry blossoms.Pleas...

On Mar 27 I took guests to Takayama Jinya, and Shirakawa-go Village designated as a World Cultural Heritage site in 1995. A magnificent view of farm ...

The festival is held in Nishinomiya shrine on the 10th of January.  It is called "TOKA EBISU Festival." EBISU is a Japanese God, one of the seven f...

Kyoto was the ancient capital of Japan from 794 over one thousand years. I would like to introduce you Kinkakuji Temple, Nijo Castle, Nishiki Market, Fushimi Inari Shrine, Kiyomizu Temple and Gion Corner.

Hiroshima has 2 World Heritage sites: the Atomic Bomb Dome and Itsukushima Shrine in Miyajima. Hiroshima is now internationally known as the first ...

I take you to Osaka Castle, Dotombori, Sginsekai and Shinsaibashi Shopping Street. In Osaka you can have Osaka local food such as Okoniomiyaki, Takoyaki, and Kushikatsu. Dotombori is popularly known as

Nara was the Imperial capital of Japan between 710 and 784 A.D. The city has many places of historical interest including Nara Park, Todaiji temple, ...

Kobe is one of the two largest ports in Japan, along with Yokohama. The city is well sheltered by a range of hills, with a population of about 1.5 million ranking it the 6th largest city in the nation. I can take you to Japanese sake brewery, Kitano Ijinkan (Foreigners' residential area), Kitano-cho (Kobe beef restaurant for lunch), Meriken Park, and Kobe Port Cruising.

I would like to take you from Shinjuku to Nikko. It'll take nearly 2 hours by train. I guide you Nikko Toshogu Shrine, Lake Chuzenj, and Kegon Falls....

Plan your trip to Tokyo with Hideo Y.