“Haru-ichiban, or the first spring wind, heralds the spring which we expected every moment during the winter.   Around the end of February every year, the first strong southerly wind hits the southern part of the Japanese archipelago. This year, it produced unusually widespread havoc. Surprisingly, soon after it, the big snow changed many areas into snowy scenery. How changeable the weather of this early spring was!!

This Haru-ichiban is due to the low pressure system which comes from Siberian area and collides with a warm temperate extratropical cyclone, creating strong wind.

With approach of the coming spring, we celebrated hina-matsuri, a celebration for families with young girls to pray for their good health and happiness. 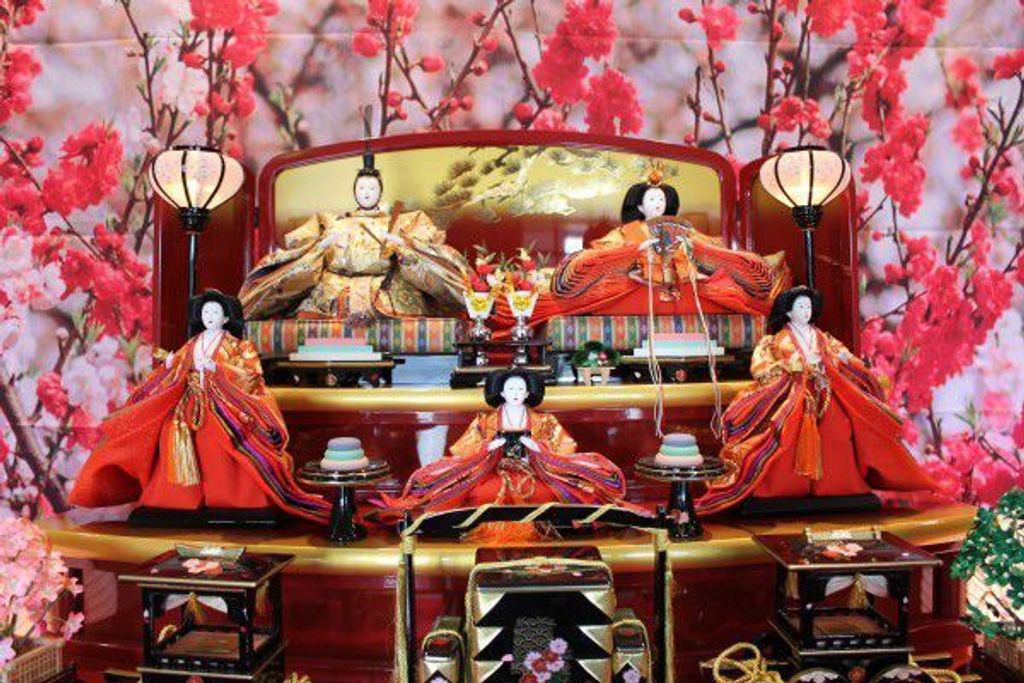 I would like to extremely brief you on hina-matsuri in this issue.

Momois peach which has been believed to have power for fertility, talisman , purification and driving-away of evil. Peach blossoms, symbolizing a happy marriage, are indispensable decorations of the display of this festival.

Sekku means one of five festivals which celebrate changing of seasons. Five Sekku includes the festival of Jan.7(Festival of a rice porridge with seven spring herbs to insure health for the new year), March 3, May 5（the Boy’s Festival）, July 7(to celebrate a Chinese legend of the Weaver and Cowherd Star) and September 9(the Chrysanthemum Festival). Each of them is held on the day and month of the same odd number which is considered as positive days by Chinese divination.

For this ceremony, hinaningyou, or small and charming dolls, modeled after characters and costumes of the imperial court of the Heian period (8th-12th century), are displayed on a tiered stand covered with scarlet rug. Girls are expected to be as elegant as these court ladies. Can they satisfy their parents' expectation fully? To delight of such girls with a grimace, amazake, a sweet drink made of fermented rice or sake lees, hishimochi or diamond-shaped rice cakes and other sweets are offered and enjoyed with their invited friends. Some hishimochi has five layers. Another has three ones. Each layer has different colors such as white, green, pink, yellow and red, representing snow, young sprout, flower, moon and sun respectively. A reason of shape of Hishi or diamond is associated with an old story that a Buddhist ascetic who obtained magical powers and immortality used to eat fruits of Hishi, or water chestnut

Ningyou, or Japanese dolls have a long history of more than 1000 years as a kind of toy. They have also played an important role in the lives of Japanese people. For example, haniwa, clay figures, were found buried in a sixth century nobleman’s tomb, and straw figure were used mainly for religious rites.

In ancient times, there was a custom for people to purify themselves in the sea or a river, and transfer their defilement to paper figures shaped like men or women which were cast into the water with offerings. These dolls were called nagashi-bina, or flowing dolls. The hina-ningyou was also originally a plain paper doll which was set into a river to drift away on March 3, wishing for drive-away of wrongdoings and impurities of children. Later, they were made of earthenware, and then took on their present exquisite form, and developed into the custom of displaying dolls in fine costume in the middle of Edo period(17th -19th century).

A full set of hina-ningyou generally consists of 15 beautiful dolls.

On the top of the tiered stand with miniature folding-screens, forming a background for decoratedBon-bori or toy candle-holders and vases containing peach blossom sprig, Odairi-sama or the Prince doll on the left and Ohina-sama or Princess doll on the right in the costume of Heian period are displayed.

Sannnin-kanjo or three court ladies are displayed along with banquet trays and dishes between them on the second stand. A court lady in the center is sitting and other two are standing. They wear a white Kimono with short sleeves and red long loose-legged pleated trousers.

Gonin-bayshi or Five musicians on the third are composed of drummers, flute players and a singer of court music.

Daijin or two ministers on the forth are in charge of political affairs and ceremonies. On the left side, there is tachibana, or Citrus which has white flowers in summer and fruits in winter and is considered as a tree of longevity. On the right side, cherry blossom trees are placed as symbol of spring.

Furniture on the fifth includes tansu or cabinet, nagamochi or large oblong chest, hibachi or brazier, kitchen utensils and those for the tea ceremony, and palanquin.

Wagons are on the sixth.

Many of these dolls are clad in gorgeous silk costumes decorated with gold and silver threads.

Let's light up Bon-bori And offer flowers such as peach blossoms Flutes and drums played by five musicians Today is Merry Hina-matsuri.

You may have missed Hinamatsuri this spring. Come back to Japan during the period from end of February and beginning of March next year. A wide variety of Hina dolls can be seen in an airport, hotel, department store or some public spaces such as station or city hall.