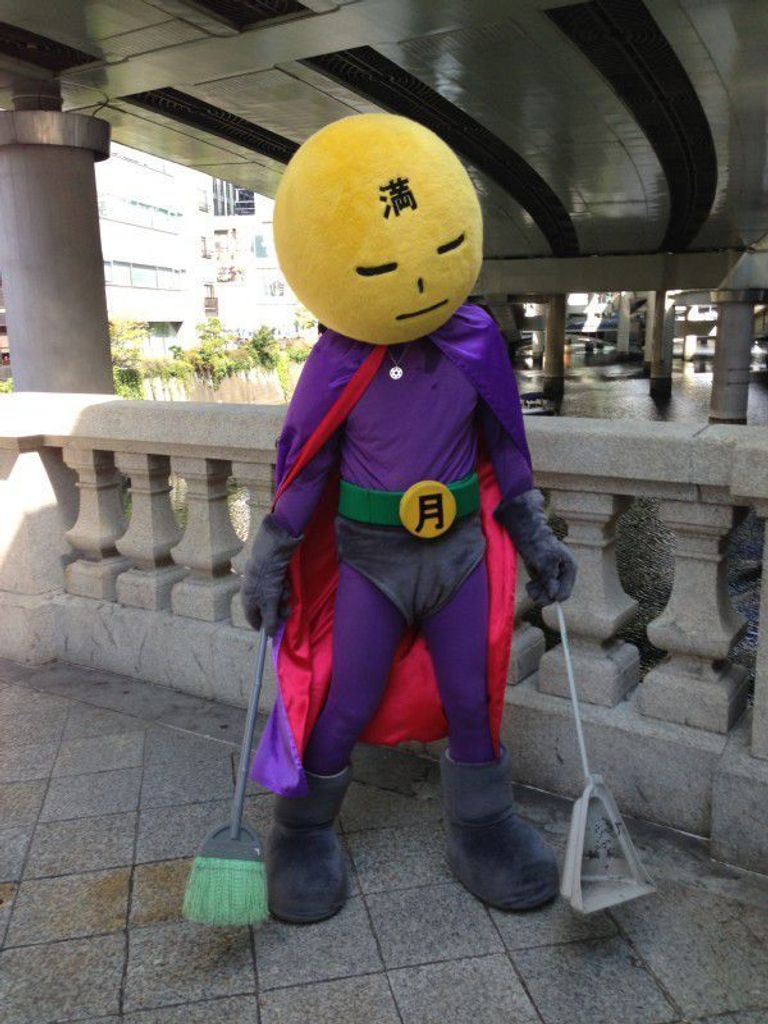 At first glance, no one may think that this is serious person who tries to make Japan by far cleanest country in the world. Nor did I, actually. It was the end of September with clear sky, and the temperture rose up to nearly 30 deg/C. (90 deg/F.) in Nihonbashi, Tokyo. Mangetsu Man (Full Moon Man) was sweeping sidewalk of Nihonbashi bridge silently, and there are some commoners-looking people doing the same around him. Mangetsu Man is tall, therefore quite outstanding and very polite and cooperative to tourists who want to take pictures with him. But he is not one of "Yuru-Chara"  (http://www.japantravelinfo.com/popculture/yuru.php?y=1) created by Japan's administrative organs which can be seen at any touristic spots in Japan these days.

According to Mangetsu Man's official site and blog (http://mangetsu-man.com/) -sorry but in Japanese only, he seems to be much more spontaneous and his aim is not to attract tourists to a certain place, but to clean Japan praying for peacefull society and happiness of everyone. Since his official birthday of 10 Oct. 2013, he has been showing up in many places (mostly historical or touristic places, such as Imperial Palace, temples and festival venues) in Japan, but main base of his activity remains in Nihonbashi that is also historical place in Tokyo. Surprisingly, his activity attracted not only tourists, but also people who voluntarily began to work together with brooms and dustpans in hands.

By the way, Autumn's full moon has been regarded as a precious seasonal charm in Japan's long history. There are numerous poems whose motif is the moon which implicitly represents Autumn. We have old tradition to admire full moon of September and October (converted from August and September of old lunar calender). During Edo period (17th-19th centuries), Sumida river in Tokyo used to be one of the popular spots to admire the moon and people floated boats on the river and spent merry time under the moonlight.

Sorry for bad photo, but it shows how and where people in Edo period admired the moon.

In 2014, full moon is expected to be seen on 8th September and 9th October, if it doesn't rain.

I hope we can enjoy beautiful moon on Mangetsu Man's 1st anniversary which is 10th October, 2014, although we do not know where and when exactly he would appear.

For those interested in Sumida River Cruise (but only day time), please take a look at "First Day in Tokyo" tour:

70 years after the tragedy Every year on 6th August at the time of 8:15 am, almost all of Hiroshima citizens (and most of Japanese nation) of...

Antique Market in Tokyo (Setagaya Boroichi) 15-16 Dec. and 15-16 Jan. every year Cold but ecxiting antique market, which sometimes has anti...

Imperial Palace Open to the Public Crowded, but merry place for Japanese people In commemoration of Emperor's 80 years (but soon Emperor i...

A hero who cleans up Japan with a broom and a dustpan   At first glance, no one may think that this is serious person who tries to make Jap...

Visit the most iconic posts of Tokyo based on your preference. The tour can be totally customized according to the guests requests. The guide will pay attention to avoiding the crowd and choosing shops which are taking measures to prevent COVID-19 infection.

Japan has started vaccination against COVID-19 in February. If you are thinking about travelling to Japan this year, please plan it carefully. In this Online Experience we will use zoom, and I will support you to make a plan to visit Japan (what to prepare, when to visit, where in Japan, ect..) We also have time to learn some basic Japanese for your future travelling (I have an official license of Japanese Language Teaching) Let me know your preferences and favorites.

Totally customized tour for guests with little ones. Avoid Tokyo crowds, choose easier route but with attractions for kids. The guide will make a plan for the guests' preference, taking into consideration the kids' age, interests. Please let me know what you want to do and I will help the parents and entertain the kids.

Plan your trip to Tokyo with Saori H.