The three great Italian masters, Leonardo, Michelangelo, and Raphael practically gave us the High Renaissance. A period of remarkable artistic achievement and production, the High Renaissance also marked the rebirth of Rome as an arts center where decadent popes spent a fortune on the restoration of their capital with the rebuilding of Saint Peter’s Basilica and lavish decoration of the Sistine Chapel and the Papal Apartments. Florence, however, was the city where the Renaissance took off and where our three greats got their early inspiration and formation. Florence was home to all three masters for some time shortly after the year 1500. One could say the town was much too small to accommodate these three giants of the art world.

Born in Urbino in 1483, Raphael was the youngest of the three and tragically the youngest at his death in 1520. He began his career in the workshop of his father Giovanni Santi, but his big break came when he began his apprenticeship in Perugia with the master Perugino in the second half of the 1490s. Following his success in Perugia and neighboring cities, Raphael worked for some time in Siena but left after a short time for Florence. Equipped with a letter of recommendation in his hands written by Giovanna Feltria, the daughter of Federico da Montefeltro the Duke of Urbino (and wife of Giovanni della Rovere), Raphael arrived in Florence in 1504. Giovanna addressed her letter to Pier Soderini, the elected leader of the Florentine Republic and patron of both Leonardo da Vinci and Michelangelo. (Pier Soderini had managed to put these two rivals to work on a project in the same hall of Palazzo Vecchio.) In the letter, Giovanna urges him to find important public commissions for the young artist. According to the biographer Giorgio Vasari, Raphael had to come and see for himself and learn from the great Florentine masters after hearing about the innovations being made by Leonardo and Michelangelo.

During his stay in Florence, from 1504 to 1508, Raphael never received any great public commissions, but he did manage to get many private commissions for devotional works and altarpieces from Florence’s elite families, like the Dei and the Nasi, but also the Doni, who were then patrons of Michelangelo. For the Doni, Raphael painted the Portraits of Angolo and Maddalena Doni (c.1504-1507). Here inspiration from Leonardo is clear, especially in the portrait of Maddalena where echoes of the Monna Lisa are deafening. For the Nasi, Raphael created Mary, Christ and the young John the Baptist, known as the “Madonna of the Goldfinch” (1506). It shows mastery of the lessons learned from Leonardo and Michelangelo with the typical pyramid composition of the figures seen in both the paintings of Leonardo and the sculpture of Michelangelo and the smoky atmosphere and landscape so typical of Leonardo.

These works and others by Raphael are now on display at the Uffizi Gallery. The recent renovation of the museum has brought together Raphael’s works with the only panel painting by Michelangelo in Florence, the Holy Family, known as the “Doni Tondo”. As a testament to these incredible few years, when these masters were active in Florence, the room offers a stunning display of the art of the High Renaissance. Join me for an incredible guided visit of the Uffizi, and come see for yourself the splendor of Raphael’s art and the beginnings of the High Renaissance in Florence. https://triplelights.com/italy/tour/florence-ultimate-3-h-uffizi-5621

Opt for a customized tour of the Palatine Gallery in Palazzo Pitti, where other works by Raphael are on display along with works by great masters such as Titian, Caravaggio, and, one of my favorites, the woman artist Artemisia Gentileschi https://triplelights.com/blog/artemisia-gentileschi-4467 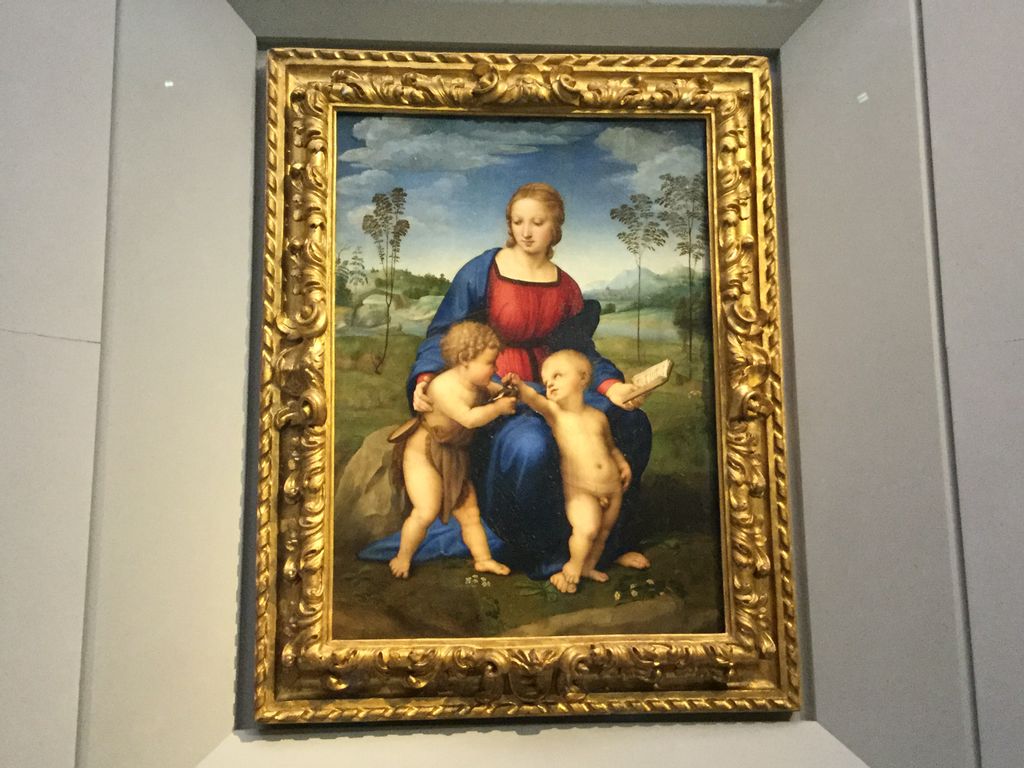 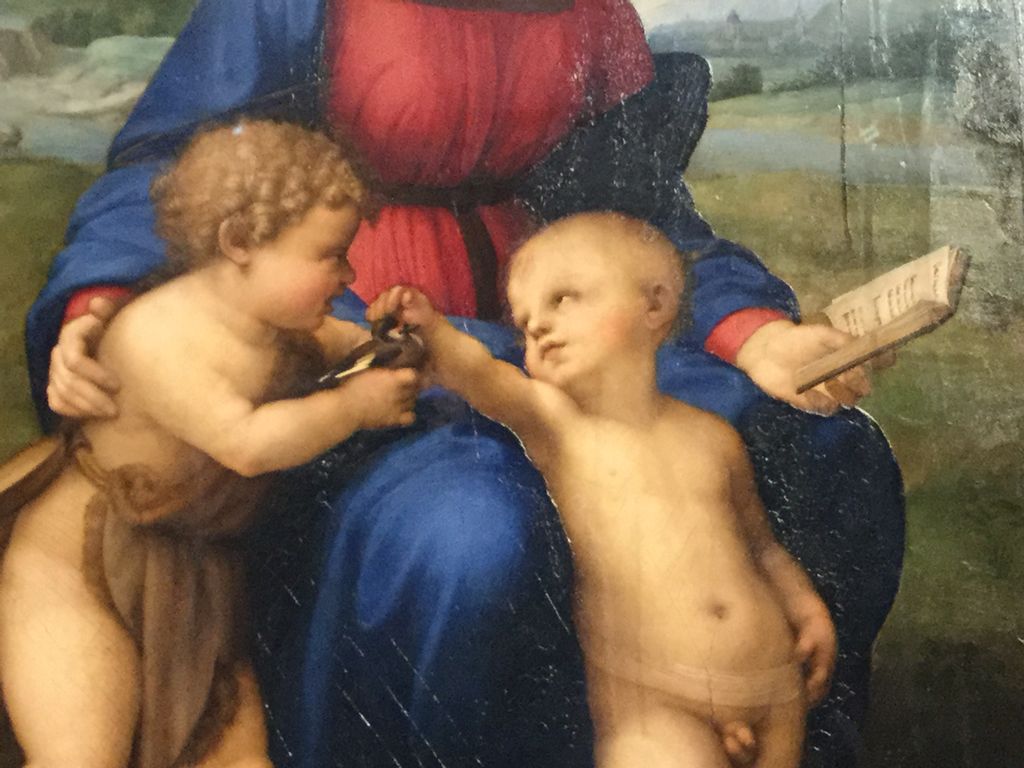 The Boboli Gardens: Gardens of Delight in the Heart of the City

Across the Arno in Florence, in the area of Oltrarno, lie the Boboli Gardens. Stretching over 110 acres (45 hectares) behind the Pitti Palace, the gar...

The fountain depicting the god of the seas was to symbolize the power of the Grand Duchy of Tuscany in the Mediterranean. It was commissioned in 1559 ...

A face from the past at the National Archeological Museum in Florence provides a glimpse of painting in the Classical World.   An in-depth stu...

Creator of the most famous statue in the world, the David, Michelangelo represents the epitome of the Renaissance genius. He began his career in the w...

Judith, the "Other" David of Florence

Many are familiar with the Biblical account of David, the young shepherd boy who took down the giant Goliath simply with his sling. It is a classic st...

Step inside the world of the Medici family and hear fascinating stories of murderous plots and political intrigue. Dominating the city's politics, society, and cultural life for over 300 years, the Medici helped to transform Florence into the Cradle of the Renaissance. Learn how this family of merchants from the countryside became wealthy and powerful bankers and then went on to take over not just Florence, but all of Tuscany, becoming grand dukes. Learn how their patronage rocked the art world.

Masterpieces of the Uffizi 3-hr Tour

Not your average tour with boring facts and dates, but a dive into the world of Renaissance Florence. See treasures by Michelangelo, Leonardo, Raphael, Botticelli, and more with an Art Historian. Hear all the intriguing stories and discover the meanings behind the works. Join me for a truly memorable visual experience through one of the world’s oldest museums. Leave the guide book at home and let me lead the way.

So what's the big deal over the David? Walk through amazing sites and beautiful piazzas as I tell the fascinating tales of Michelangelo’s life and prolific career. Then see the David at the Accademia along with unfinished works still bearing the marks of Michelangelo's chisel. Hear the story of how an abandoned block of marble was transformed into a wonder of artistic genius and how the statue transformed its creator into one of the greatest artists of all time.

Dock in Livorno and have a driver take you to beautiful Florence to visit the landmark Ponte Vecchio, Piazza della Signoria, and the Duomo on a walking tour. Step inside the Uffizi Gallery and the Accademia. Admire works by Leonardo, Michelangelo, Botticelli, and others. Learn about Renaissance art; discover how Michelangelo created the David and how Leonardo surpassed the masters.

The Bargello and Renaissance Sculpture

Discover how Renaissance sculpture broke all the molds. Learn about great masters like Donatello, Ghiberti, Brunelleschi, Michelangelo and others. The itinerary begins with a walking tour, stopping at landmark sites where public competition and commissions triggered artistic genius. Then visit the Bargello and admire original works housed in an impressive medieval structure. Discover the Davids which were the forerunners of Michelangelo’s colossal. Learn about different sculpture techniques.

Lofty arches, harmonious spaces, and imposing domes. Experience architectural wonders of Brunelleschi and Michelangelo with an Art Historian. At San Lorenzo Basilica discover how an ancient Roman architect inspired Brunelleschi to design the first Renaissance church. Then at the Medici Chapels see how Michelangelo broke the rules where architecture and sculpture are fused together for a dramatic effect. Learn how the Medici made it possible and how they ultimately caused Michelangelo to flee.

Plan your trip to Florence with Loredana A.