Now, autumn is in full swing. The Japanese have a saying; " autumn is a season when the sky is high and horses gain weight",because the weather is generally fine throughout this season, and autumn in Japan is poetically called "minori-no-aki"(autumn of harvest season), since plants lose their bitterness, and become sweet and succulent.Therefore, we have very good appetite which helps us regain vitality, especially after hot and fatiguing summer. 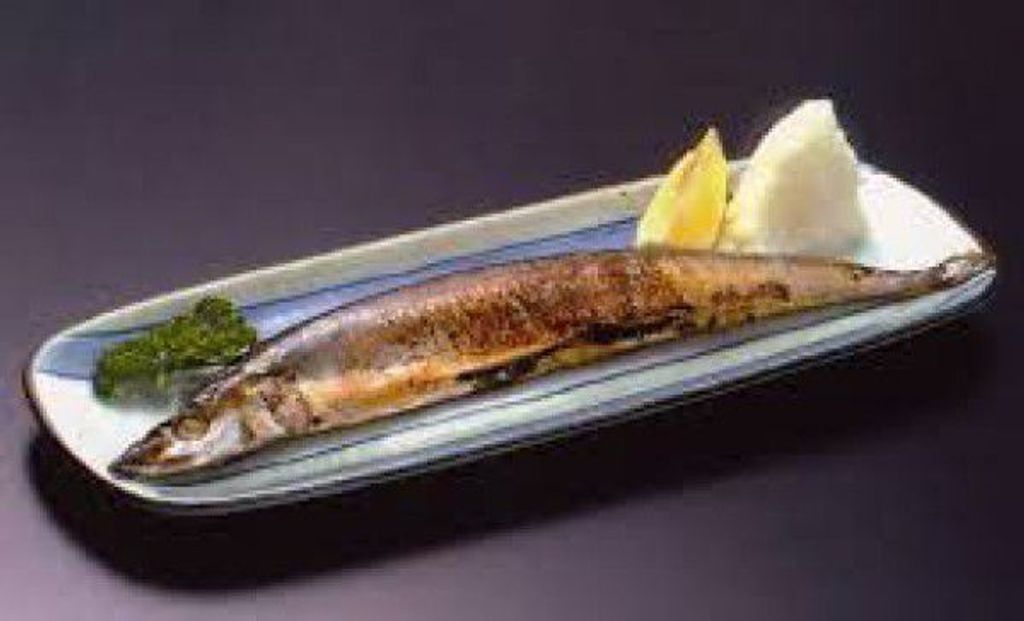 Among a wide variety of food in season, I would like to recommend you to enjoy "Samma" fish or Pacific saury. In Japanese characters, it is written 秋刀魚, this literally means autumn- sword- fish, because it represents fish of autumn, and its brilliant and slender body reminds us of a Japanese sword.

"Samma" are about 40 cm long and live in the sea off the northern part of Hokkaido in summer. In the beginning of autumn, they begin to swim southward along the Pacific coast for egg-laying, pass by off the coast of Tohoku and finally reach Choshi, Chiba prefecture. During their traveling, they continue to eat so much animal plankton that its lipid content rate will be as much as 20 %. The best way of cooking is to salt and grill it. Japanese usually grill whole plump samma in season and enjoy it together with grated radish.

one piece of Rakugo , of "samma"

Here, I would like to introduce one piece of Rakugo , of "samma".

Rakugo is a form of comic storytelling performed by an entertainer.

It is witty and full of humor. Puns are also involved.

The story ends with a funny punch line or an unexpected twist.

In days of old, a person in a high position didn't know the life of the populace at large, so he wanted to know it as much as possible. On a fine autumn day, a lord accompanied his retainers to pay respect to Meguro Fudo, God of Fire.

After a while, the good smell of grilled samma was floating from a near-by farmhouse. One of retainers said, ” I would like to eat chazuke, cooked rice with green tea with samma.Upon hearing it, the lord said to the retainer, "I want to have samma, too."

The retainer got embarrassed and said, "samma is lower fish, so it does not fit the lord."However, he had to follow the lord’s order. After repeated requests, he managed to get grilled samma from an old man at the farmhouse.

The lord was fully satisfied with his first taste of samma. The taste of samma became an unforgettable one ,especially because he was hungry at that time.

For days later, he was not able to have such humble fish at all.

One day, the lord was invited to his relative's house, and he was told by the host, "Ｗhat do you prefer to eat? Please feel free to ask me." So, he requested samma at once. To their surprise, they sent for the best samma from the Nihonbashi fishmarket (the largest fish market in Edo, Tokyo)",however, they were very afraid it would affect the health of the lord because samma was so rich in oil. For this reason, the samma was steamed and its small bones were carefully taken off. You can imagine that fish prepared in this way was tasteless, with its eyes losing black color to be white ()

The lord told the retainer, "Is this really samma? Is it the wrong one?

It should have been grilled blacker like the samma I ate last time.…………."

The lord asks the host retainer, "Where did you get it from?"

"We bought samma from the Nihon-bashi Fish market"

Oh, no. samma should be only available from Meguro.