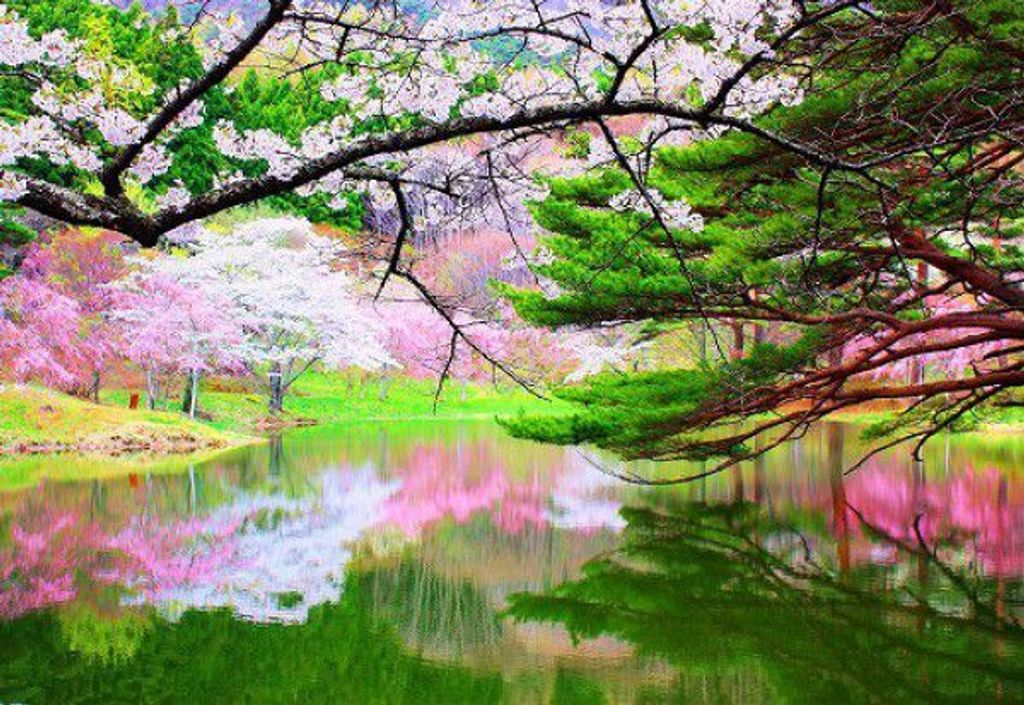 Whenever spring comes around, I sing to myself a song "spring" for primary school music classes which literally means;

Where has it come?

It's came to mountains, villages and fields also♪

What a sort of song do you sing upon hearing the approach of spring?

Early in March, the cold of winter has eased up, and the temperature gradually goes up, and rainfall rapidly increases. In the southern part of Japan such as Kyushu, rapes blossoms and peaches bloom. White butterflies fly around the cabbages, and then sparrows come in late March.

Some of spring flowers are indigenous to foreign countries including China, South Africa, Europe, or North America. However, they have mated with local species, becoming very Japanized for centuries. So many people simply assume that they are native to Japan, and often put them into Haiku as traditional season words of spring to express their feelings towards such flowers.

Can you find some of them in your country?

In this issue, to enjoy the spring of Japan with a step ahead, I would like to show you Sankeien Japanese garden, accessible only within 50 minutes from JR Tokyo Central Station to Negishi Station, the nearest one, on JR Keihin-Tohoku Line - Negishi Line, in Yokohama City. Yokohama celebrates the 150 th anniversary of the opening of Yokohama Port for 6 months from April 28 to September 27 this year. 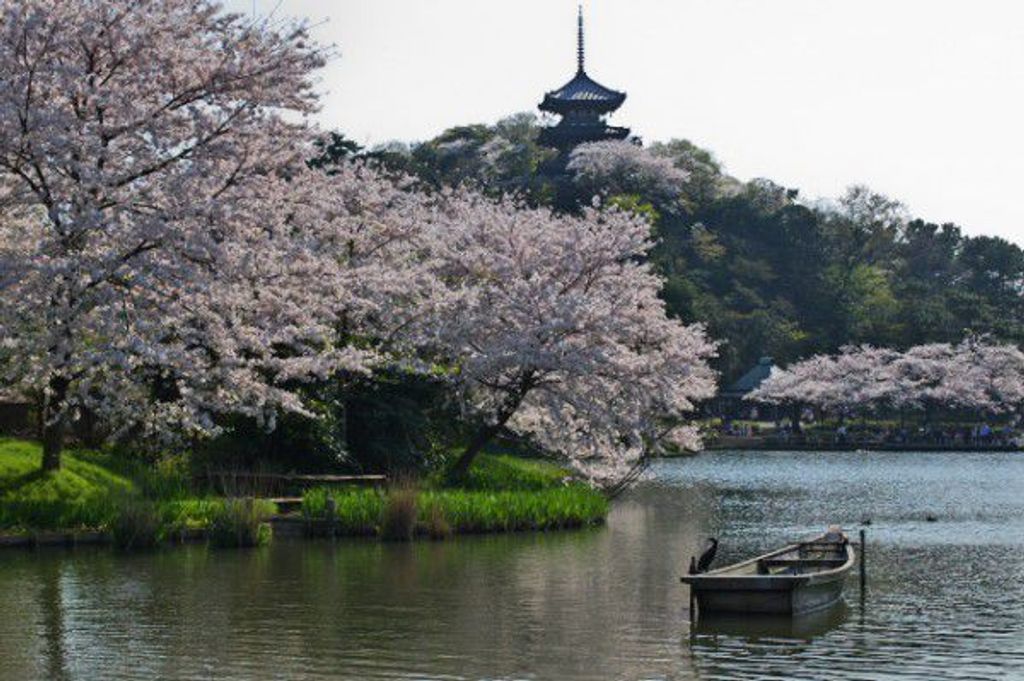 Sankei en Garden was originally laid out by Hara Tomitaro (1868-1939), one of the most successful silk traders in Yokohama during the civilization and enlightenment of Meiji period (1868-1912). He has also been known as an art-lover and a patron to many young promising artists and literary men, and played a key role for the development of Japanese art world in the early 20 th century.

The name of the garden came from his artistic name "sankei" or three valleys. The garden covers the area of over 17.5 ha of undulating land with three valleys, featuring many historical buildings which were moved from Kyoto and other areas, and arranged exquisitely in harmony with the environment. Ten of them are registered as important cultural properties.

Therefore, you can enjoy not only a wide variety of seasonal flowers of spring, but also various kinds of Japanese traditional buildings in the garden here.

The garden consists of two parts; the inner garden and outer garden.

It used to be the Hara family's private garden with many excellent buildings, including;

It was a small temple built in the courtyard of the Daitokuji Temple in Kyoto by Toyotomi Hideyoshi. He unified the whole Japan after the Warring States Period (1467-1568), to celebrate his mother's recovery from a serious illness and his mother's longevity in 1592.

It was built in 17 th century in Wakayama (its old name: Kishu) prefecture near Kyoto by Iemitsu(1604-1651), the third Tokugawa shogun, as one of villas for Kishu Tokugawa family. It has a typical structure erected during the transition years from the Momoyama period(about 20 years in mid-16 th century) to the Edo period(early 17 th century-mid-19 th century), featuring the combination of shoin-dukuri(study-style) and sukiya (teahouse-style) architectural styles. It has the roof covered with 3mm-thick blocks, having precious sliding doors with paintings by Kano-school and the elaborately-designed tea-ceremony style room.

It is the L-shaped building built by Hara Sankei in 1920 as his residence. It features a hall with Western-style tables, chairs, and light fixtures while it also has Japanese design atmosphere.

I t is the tea house, being built for feudal lords in Kyoto Fushimi-castle in 1603 as the waiting room which is said to have been built by Oda Urakusai, the youngest brother of the famed warlord Oda Nobunaga. It was originally 3-matted room with 9 windows, with the washing place and hall added when moved from Kyoto in 1918. The tearai-ishi(washbasin) was reportedly used by Zen master Muso Kokushi who was the venerable priest, promoted the trading and developed the Japanese garden art in 14 th century.

It was built based on his taste of Hara Sankei in 1918. The very small room consists of a Japanese tatami mat for a guest, a smaller host's tatami and alcove only. It is called Kinmou-kutsu because the alcove pillar was moved from the old handrail of Kinmou-kaku-called main gate of Kyoto Daitoku-ji, the main temple of Rinzai Buddhism.

It was built in 1651 in Kamakura. It was originally painted fully with black-japan, remaining traces of the color still today.

It was built as the tea house by Hara Sankei in 1917. The center of the earthen floor has the thick pillar which was the old material from Uji-byodo-in-Temple, in Kyoto.

It was originally built in Nijo Castle in Kyoto in 1622 by Tokugawa Iemitsu,3 rd Togugawa Shogunate. After several movements, it finally was moved to this location and reassembled in 1922. It has a traditional Japanese style of residential architecture, but it has a luxurious atmosphere.

It was built early in the 20 th century after the model of Kan-getsu-dai of Kyoto Kodai-ji built in 1606.

The outer garden is arranged around the Oike or Big Pond.

Three-story pagoda stands 25m high on the hill as the symbol of the park, commanding the pond. It is supposed to be more than 500 years old, and being brought from the Tomyoji Temple in Kyoto Prefecture. So it is the oldest building among many buildings here. The main hall of Tomyo-ji temple across the pond was build around the same time.

It was built by Hara Sankei for his family in 1902. Many artists and intellectuals would assemble to appreciate and study his collected precious antiques for their mental sustenance. The guest room is the very important place for the Japanese modern art because it has many master pieces painted by distinguished Japanese painters.

It was built in 1908 as country-style tea stall, using old materials. It is named Yoko-bue or a flute because the image of lady called Yoko-bue was enshrined. She served for a empress and is still well-known as heroin of the tragic love story "takiguchi nyudo".

It was built in the Edo period (17 th -19 th century). Toukei-ji temple used to be famous one to act as a refuge for abused wives. It is one of Zen-style temples which are very few in number now.

It was built before 1763 without the use of nails or cramps in Shirakawa-village. It has the traditional style of Japanese architecture with a massive, thickly-thatched roof supported on steep-angled principal rafters. It was moved to this place because it would disappear under the dammed-up waters.

It was built in 1970 and modern Sukiya-style building. Taking this opportunity, I will brief you on the difference among four Japanese-traditional buildings which can be seen in Sankei-en Garden.

It is a traditional Japanese style of residential architecture that includes a tokonoma or alcove. It features partitions of sliding doors, sliding paper doors and sliding screens, and also ceilings and tatami or straw matting. It is an archetype.

It is built based on building method of tea room. It features on deleting horizontal piece of timber in the frame of the house and using pillars with unshaved skins on corners.

Tea house is the Shoin-dukuri modified into easily-made and refined residence.

It features an earthen-floor where they damp straws into ropes or into straw bags and work at night. There are a stable, pickle barrels and farming tools and also kitchen deep inside.

Finally, I would like to brief you on Japanese gardens.

Japanese exceedingly loves a life in harmony with the nature. For this reason, Japanese garden is designed to represent nature, imparting a sense of natural beauty and seasonal changes in a simple arrangement. This philosophy is embodied by building a reduced landscape including a pond and hill, arranging trees and rocks in a limited space and benefiting from its surrounding scenery. We are apt to simply call them Japanese gardens, however, there are several types among them.

Kare-sansui is the dry garden style in which the ocean or rivers are represented by sand without using water.
Rocks are used to symbolize mountains, islands, boats or dragons. It is seen mainly in Zen temples.

Cha-niwa is the garden next to a ceremonial teahouse. This style of garden developed as the tea ceremony became popular, symbolizing the beauty of nature in the simplest arrangements.

They are based on the concept; Water is associated with purity, underground with hell and water with paradise. It mixes the state of paradise in the western Amitabha and house of this world.

They were built for Zen priests during the period from Kamakura to Muromachi period(12 th - 16 th century) as temples or villas for warlords, with remainders of an atmosphere of Pure land garden and having dry garden.

They were built in the Edo period (17 th -19 th century) by feudal lords to show off his wealth and power. He intended to enjoy an artificial life. It has a style of Japanese garden with a path around the central pond, typical of Edo period Daimyo grounds.

Running my eyes through Japanese traditional gardens with my limited experiences overseas, I think Japanese ones are in striking contrast to geometric and artificial ones in the West. How do you think of a difference between them?   Let's stroll a Japanese park in or around your hotel, make sure which type it belongs to, and enjoy a brief time of your stay in Tokyo at the height of spring.