The Robot Restaurant in Shinjuku, Tokyo (with video)

Japan has long been a world leader in robotics and technology, ever since its boom in the electronics industry in the 1980s.  And with such iconic "techie" districts like Akihabara, it is easy to experience Japan's technological wonders as a tourist in Tokyo.  But in recent years, Tokyo has stepped it up a notch and now provides something on a whole new scale to travellers who want the ultimate experience in Japan's techno-robotic culture - The Robot Restaurant.

Located in Shinjuku's Kabukicho, The Robot Restaurant at first seems to fit right in with the dazzling neon lights of the surrounding area, but upon closer look you will find it's a whole new different thing entirely.  Passing the moving robot display at the entrance, you are bombarded with an interior bonanza of sparkling, multi-coloured LED lights and shiny reflective walls that reminded us of something out of a Mighty Max/ Star Wars hybrid film.  After boarding the elevator and riding to the waiting room, things get even more glitzy.  The waiting room itself is loaded with an array of fancy gold and red chairs, shiny tables, and more reflective surfaces than a carnival fun-house.  Overall, the venue feels very retro-modern, if that makes sense.  Think what people in the 70s might have thought the future to be like, and its pretty bang-on.  Despite this perfect mix between tack and class, we had a very comfortable time in the waiting area, and it's a great place to have a few drinks, settle down, and enjoy some pre-show musical entertainment. 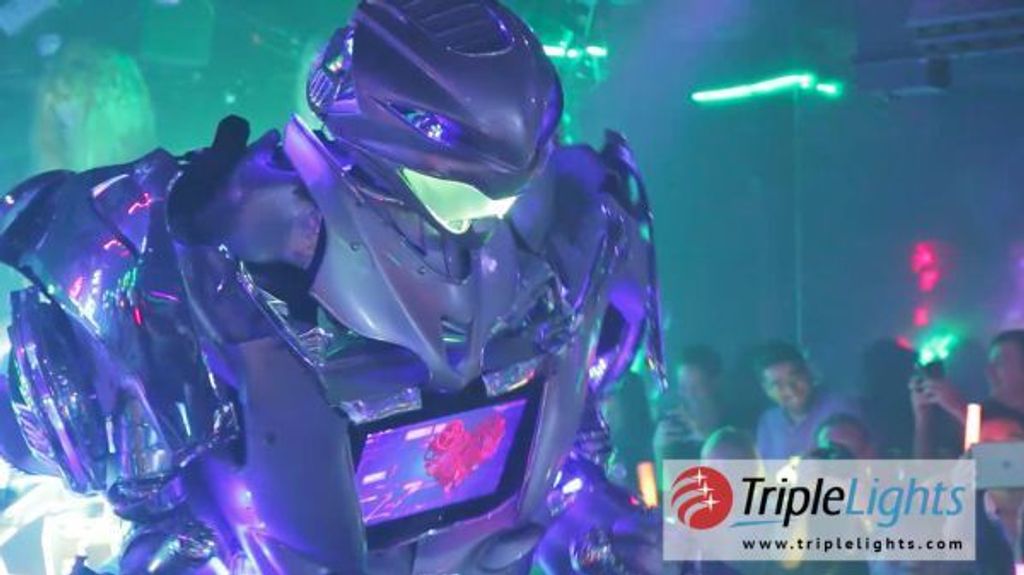 Moving on from the waiting room, everyone makes their way down to the basement where the real show begins.  The main show room itself is not too big, with a stage aligned in the centre and chairs and tables lined opposite each other.  The size and setup is well-designed in that there aren't really any "bad" seats and everyone can get a nice view of the show.  As it was our first time there, we didn't really know what to expect from the performance, but I think it's safe to say we were all surprised at what we saw.  Basically, the show had about everything, from fighting robot suits, to actual motorized robots, to bikini babes riding motorcycles, to synchronized drummers, and much more.  What's interesting is that despite how different and random each segment of the show was, there was some strange unity to the madness.  You'll get a good idea from watching the video, but overall the performance felt very wacky (in a good way!).  This in itself felt like a unique Japanese experience in that you have elements of anime-like futuristic technology, J-pop-like synchronized dancing, and just plain weirdness, all combined into one stunning show.

For us, The Robot Restaurant truly felt like a unique experience, and something that you could only really imagine in Japan.  Our only gripe was the food, which looked a little too much like "snacks" for our liking and it would have been nice to incorporate more of a "dinner theatre" type vibe.  Apart from this, we were very happy with the performance and felt the show to be well worth it.  Sure, there are other performances you might have visited which might be higher budget and better choreographed, but in the end nothing quite expresses Japan's futuristic, robot culture in such a unique way as Shinjuku's Robot Restaurant.

We recommend you check out the restaurant for yourself if visiting Tokyo, as it is much better in person, and of course there is a lot we didn't show you in the video.  Below is a link to The Robot Restaurant website: