This and That of NIkko

Unusual frequency of torrential rain fallings and thunder storms over limited areas have seemed to minimize frequency of attacks of Typhoons to Japan this year. In Hokkaido, the northern part of Japan, trees including maples and mountain ashes already took on autumnal reds and yellows; a photo of colored leaves in Daisetsu-area mountains in Hokkaido appeared in a newspaper of September 6. Since then, the autumn leaves front is going southward day by day through the Japanese Archipelago. For colored leaves, please visit the back numbers of Cafe Negishi.

In this issue, I'll brief you on Nikko which is the most popular destination among people around Tokyo to view colored leaves, and is easily accessible from Tokyo by train for one- day trip. If you join TripleLights Tour "Day Excursion to Toshogu & Kegon Waterfall", you can enjoy a gorgeous Japanese brocade woven by various colored leaves and an excellent guidance by a professional guide. So, herein, I'll touch on Nikko very briefly.

We have been often asked by visitors whether the Toshogu Shrine is the residence or not, because it is very gorgeous and spectacular. It is the mausoleum dedicated to the soul of Tokugawa Ieyasu. In Japan, great people would be defied as the god in accordance with Shintoism, the traditional polytheistic religion of Japan. If you learn the Japanese history, you can understand why he was defied as god and such beautiful buildings were built for him. 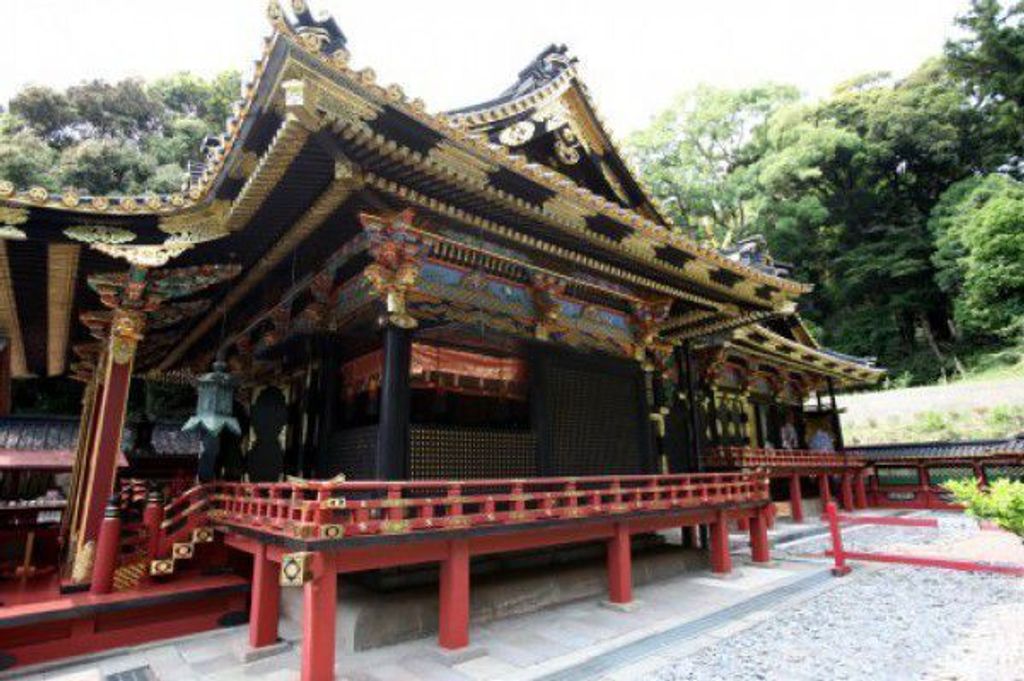 Tokugawa Ieyasu was born in 1542. He was forced to move from place to place as a hostage for powerful warlords in his childhood during the Warring States period(mid-15 th - late 16 th century). However, through many hardships, he finally conquered the whole of Japan. With establishing the social system and order, promoting scholarship and industries, stabilizing the people's livelihood, he built up the foundation of over 260-year- peace which seems to be rare in all histories of the world. So his great achievement still has been respected partly because it allowed Japanese to enjoy such long peaceful lives, and partly because to put a process in motion to develop Japan dramatically in modern times.

The Toshogu Shrine is located due north from Edo, Tokyo. That is why the North Star appears just above the Youmei-mon. In those days, people believed the direction of the North was a “demon's gate” or unlucky quarter according to the Way of Yin and Yang, ancient Chinese method of fortune telling. Not only for the fortune telling but also for his intention of preventing powerful feudal lords in the northern Japan from attacking Edo, or Tokyo, he died with a will to be enshrined at Nikko as guardian deity for people in Edo.

Toshogu was built on the cut-open narrow ground. So many buildings stand on sloping and undulating ground of 91K ㎡ . Furthermore, the area is located about 640m high above the sea level, having high rainfall and humidity compared with flatlands such as Tokyo. Therefore, many unique techniques for those days were skillfully applied in order to accommodate over 20 buildings in the limited ground, thereby preventing them from deterioration by its natural environment. Today, most of the buildings are designated as the national treasure, and they vividly hand the architectural and ornamental limit, which came to complete maturity after the war-torn period(mid-15 th - late 16 th century), down to us.

To accommodate many buildings in such narrow precincts, there are many stairs and stonewalls to make uneven level. The approaches to the shrine are paved with flagged stone floors. The walls are piled up with enormous stones, the largest one of which is 5m high and 7m long. Furthermore, the grounds around the buildings are spread all over with cobblestones to prevent mud from splashing to the buildings on rainy days and to prevent weeds from growing. Under such geographic and climatic conditions, gorgeous buildings seem to have kicked out Japanese-style gardens which are commonly seen in temples or shrines. 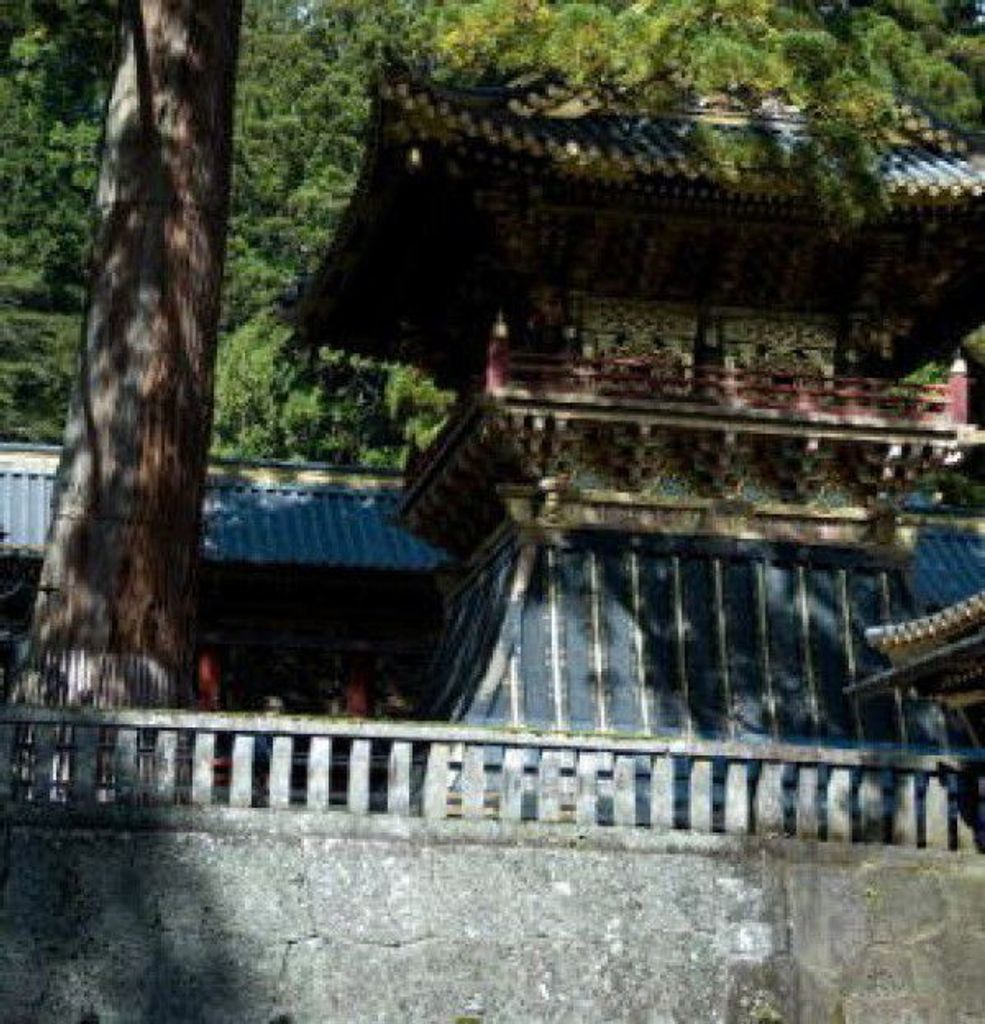 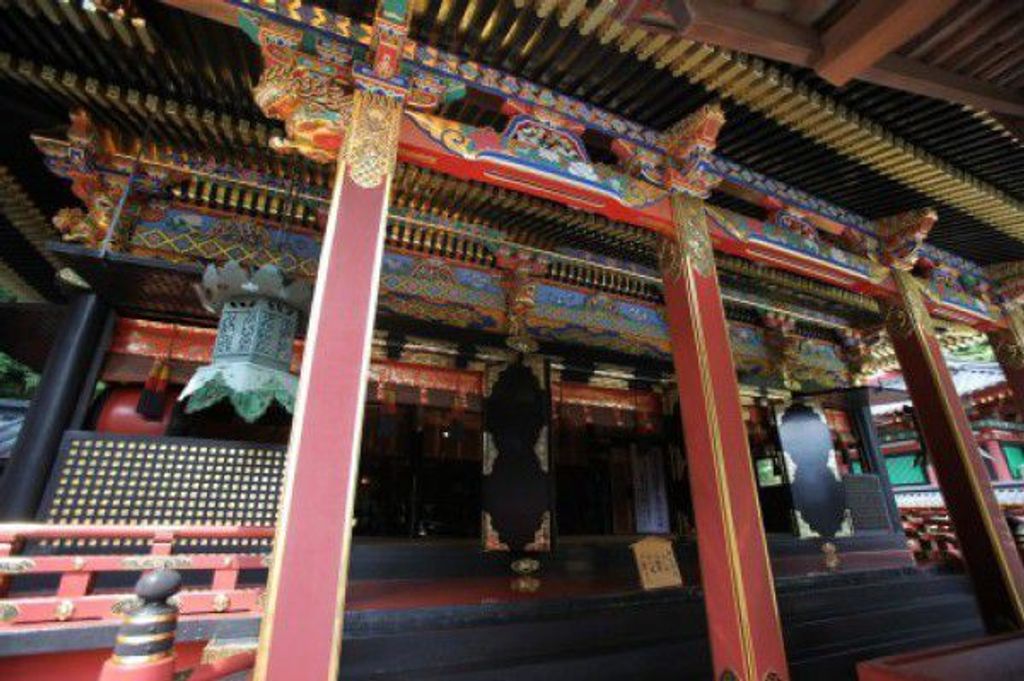 The greater part of the buildings is covered with various sculptures both in their carving method and in their motives. 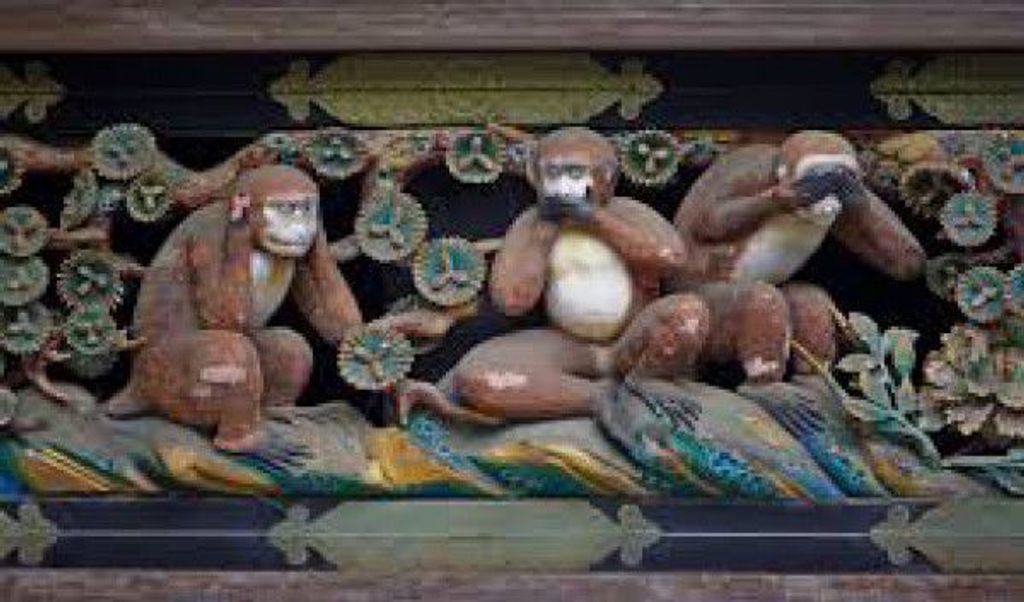 The way of engraving includes;

is seen at a projecting part out from a pillar. It is a decorative woodcarving, the outside and inside of which is carved in the openwork method to finish it in three dimensions.

a method to carve a wood to form U-shape in the section of the wood.

make a pattern on the surface of a wood which was painted with Japanese by a hairline engraving, and then stuff gold leafs or gold dust on the pattern.

cutouts a wood and then work on it to form several forms.

carve a wood to make a pattern which apparently stands out on the plane phase. The motifs include flowers, birds, animals, imaginary animals and persons including adults and children, and Confucian thought.

After appreciation of the leading mausoleum, you drive up the sharp slope along the valley from Uamagaeshi, about 833 m high above the sea level, and about 6 km away from Toshogu. In old times, the mountain was considered as a sacred ground, so women and horses were not permitted to climb up furthermore from here, so it was named “Umagaeshi or horses turn around”. Originally, the slope had 48 turns, so was called Iroha-zaka or Iroha slope liken to Iroha or Japanese alphabet, consisting of 48 letters.

Kana is Japanese syllabic character, and we have two types: hira-gana or kata-kana. Both of them have a same suffix; kana or gana. Kana or gana means stopgap.

hira means imperfect in Japanese, and it is very cursive style of writing Chinese characters, more abbreviated and flowing than the running style. Around the beginning of the Heian period (8 th -12 th century), it began to be often used by ladies in writing poems and letters, and developed among people.

kata also means imperfect, because a part of a Chinese character such as a side, a right hand, a crown or a foot was used to express a sound of Japanese. For example, It was invented as means for guiding marks for rendering Chinese into Japanese, and now is used to show foreign loan words, onomatopoeic words and mimetic words.

The Japanese have to learn 51 hiragana and 51 katakana and at the least 1,850 Chinese characters for 9 years including 6 years in primary school and 3 years in junior high school. I think that it is a heavy burden for children. How do you think it, compared with your mother tongue?

You may enjoy a taste of yuba for lunch. Yuba literally means boiled leaves in Japanese. It is processed from soybean. Concentrated soybean milk is poured into a 7-8cm deep container and then heated to an extent near the boiling point, at which it forms a film on the surface. This film is scooped up with a bamboo stick and dried into yuba . Through handlings, seven or eight sheets of yuba can be scooped up. Yuba scooped at the beginning is high-quality one because of richness in protein and lipid. One scooped at ending has less protein and lipid, but rich in carbohydrate. 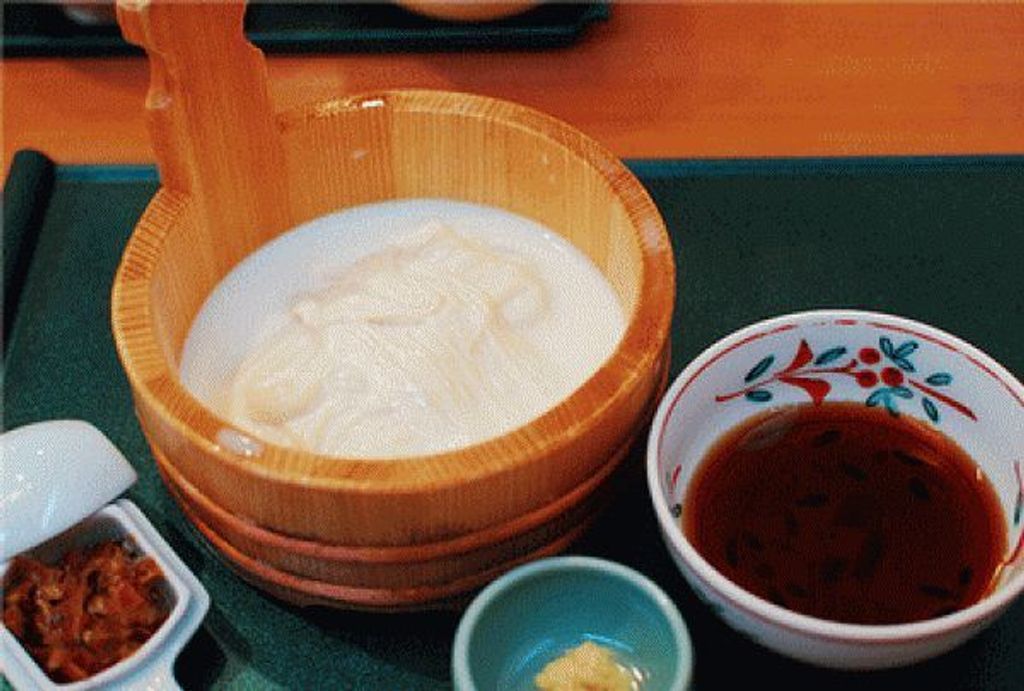 Yuba has a wide variety of types; uncooked yuba , dried one, semidried ones including rolled one, knotted one, one pickled in sweet Kyoto-style miso and pipe typed one. Yuba has been used for vegetarian food. That's why Nikko and Kyoto, temple towns, are famous producing centers. How about buying dried yuba for souvenir for your family?

Do you agree with the old saying, "Don't say Kekko, or wonderful until you have seen Nikko"? To make sure, let's join TripleLights Tours "Day Excursion to Toshogu & Kegon Waterfall"