Your In-Depth Guide to Buda Castle

Considered to be the heart of Budapest’s history, Castle Hill is a 170 meter tall limestone outcrop on the Buda side of the Danube River. The magnificent structure that dominates the southern portion of the hill is Buda Castle - a building of neo-baroque architecture with a multifarious history. It is now the home of the Hungarian National Gallery, the Budapest National Museum, and the Szechenyi National Library. The area around and including the castle is known as the Castle District and is a UNESCO World Heritage site.

A visit to Buda Castle is part of the quintessential trip to Budapest. To be sure you don’t miss out on anything, get yourself an experienced guide for your personalized group or private tour. Now let’s dig deeper into the history and sights around the castle. 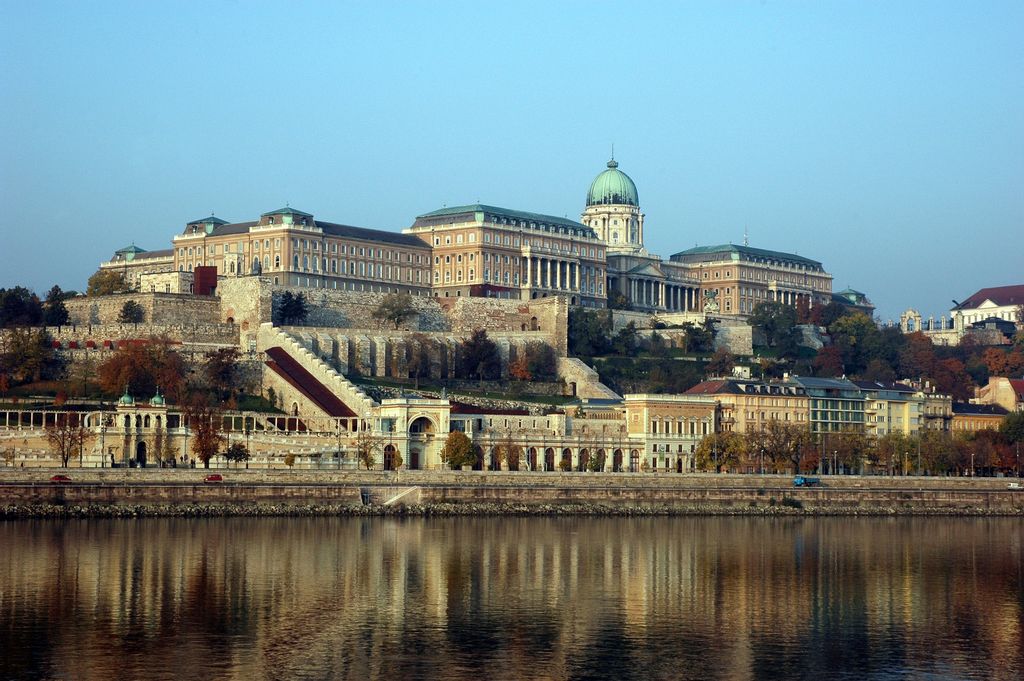 The original castle was constructed by King Bela IV of Hungary between 1247 and 1267. The oldest portions of the castle still standing are from the 14th century, built by Stephen, Duke of Slovenia and younger brother to King Louis I. Under the rule of King Sigismund, the castle was enlarged and significantly fortified. Sigismund was a Holy Roman Emperor who chose Buda Castle as his residence, intending to use it as a symbol of his prominence to other European rulers. The construction in Gothic style took place primarily between 1410 and 1420. King Matthias Corvinus was responsible for the final stage of large-scale building.

During the Renaissance period, the palace was remodeled in contemporary style. However, in 1529, the Ottoman army besieged Buda, and the palace was badly damaged. In 1541, Buda came under Turkish rule. The palace was used as a barracks, stables, and munitions storage. Otherwise it was left unattended and began to decay. In 1686, a renewed Christian campaign  attempted to recapture the city. The Tower of Stephen, which was being used for gunpowder storage, was struck by a cannonball, and the resulting explosion was said to have caused a wave on the Danube that washed over the opposite shore, swamping artillery batteries and guards. 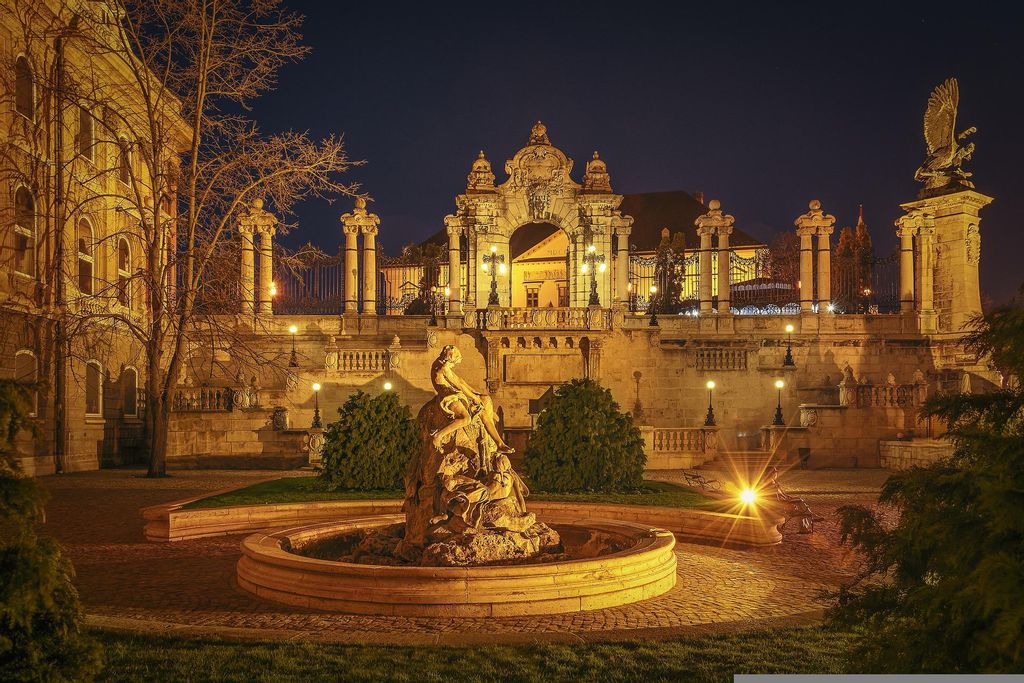 In the decades after, the palace was in such a state of disrepair that much of it was  demolished in 1715, and a new Baroque style palace was constructed. Though the structure was restored to prominence, the contemporary royalty did not wish to reside there and it became temporarily used as a nunnery, and then a university. In 1791, the Hapsburg  palatine of the Kingdom of Hungary took up residence in the palace. The latter half of the 19th century saw the palace restored under King Franz Joseph. During this time, the cities of Buda, Pest, and Obuda were amalgamated to become Budapest, the capital of Hungary. From 1920 to 1944, the palace became the seat of political life in Hungary. However, the building was to suffer great damage once again at the end of the war when the Soviet Red Army attacked German and Hungarian forces who were using the castle as a final stronghold.

Since then the castle has been experiencing continued reconstruction projects to restore it to its former grandeur.

A Tour of Buda Castle 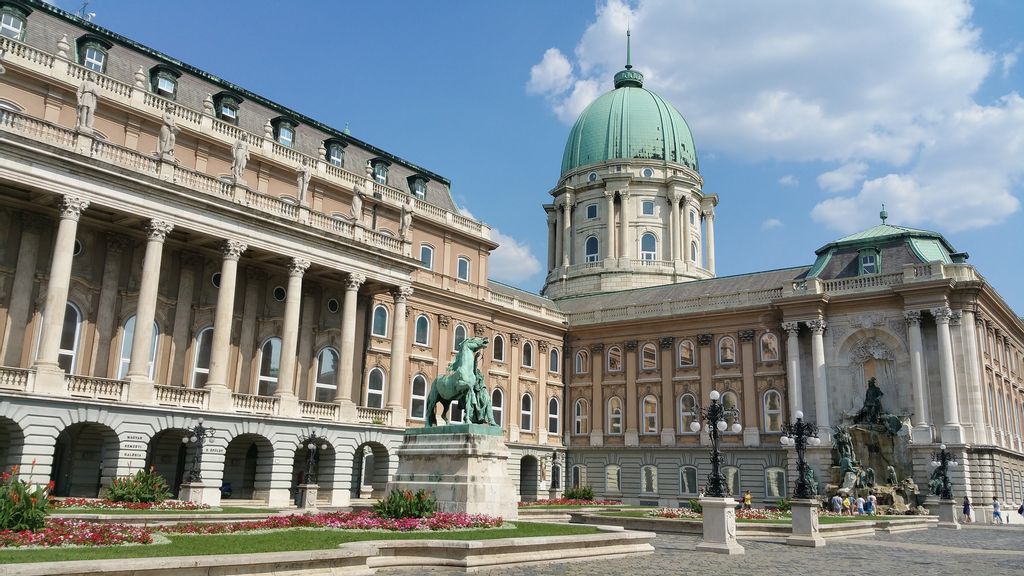 There are various ways to access the castle. During reconstruction periods, tour bus traffic is limited. Recommended as the most scenic and enjoyable way to reach the castle is the Castle Hill Funicular. It is a slow ride up the slope in a funicular that runs like a pendulum, with the descending car pulling up the ascending one. There are fantastic views over the Danube and the Pest side of the river. Other options include elevators such as the one at the beautiful Castle Garden Bazaar at the southern end of the hill, a taxi, tuktuk, or city bus. For our virtual tour, we will use the funicular.

At the top station, there is a statue of the mythical bird, Turul. The turul is an important bird in Hungarian mythology and regarded as the guardian spirit of the Hungarian people. One tale says that in the 9th century, the Turul flew ahead of the migrating Magyars and dropped its sword to indicate where the new kingdom should be established.

Immediately to your right (north) is Sandor Palace. Built in 1806, this is the office and home of the president of Hungary.  In front of you is Saint Gyorgy Square, and to the left, the impressive building is Castle Palace Building “A”. Walk through the archway on your left and descend the steps on the other side. Here you will see the Fountain of the Fishing Children. Continue along the walking path with the building to your right until you reach the statue of Prince Eugene of Savoy. He helped liberate the region from 150 years of Turkish occupation and also prevented conquest from the French. 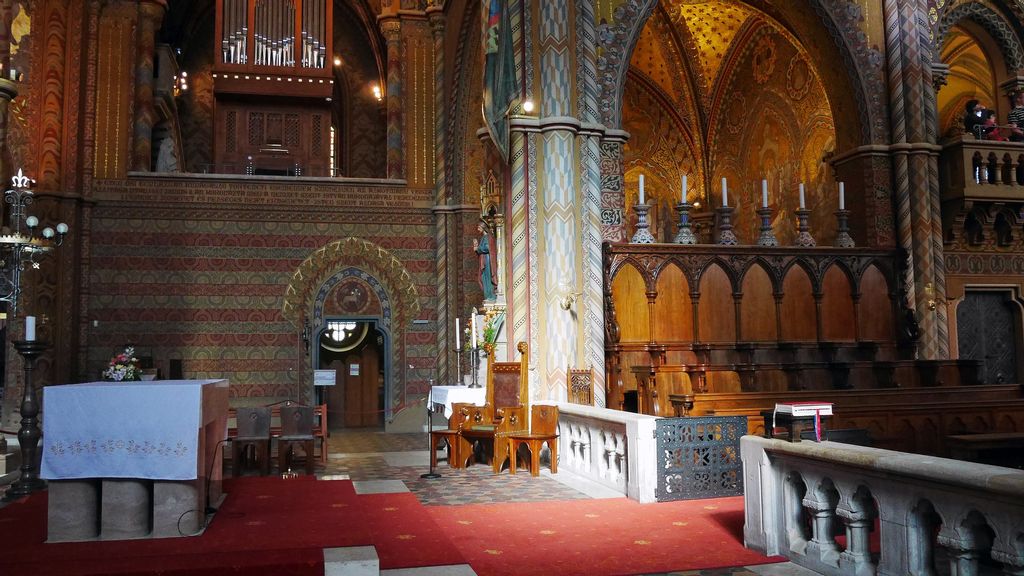 At the statue, you will be able to pass through an archway to the other side of the building. The open space here is Hunyadi Court. At the court, you can see one of the most famous and beautiful fountains in Hungary. This is the Matthias Fountain depicting King Matthias on a hunt. There is a secret love story here as well. When King Matthias went out incognito in order to see the affairs of his kingdom, he met a young peasant woman, Beautiful Little Helen (Szep Ilonka), and the two fell in love at first sight. However, when she learned he was king and recognized that they could never be married, she died of a broken heart. The fountain includes many details, including the figure of Szep Ilonka on the right.

The structure behind the fountain is the domed building of the palace. This is the National Gallery of Hungary which exhibits works by some of Hungary’s most famous painters. It is open from Tuesdays to Sundays. Entrance is free, though some exhibits may require a fee. Behind  the building is a large courtyard and two more large buildings. One is the National Szechenyi Library. It is the largest library in Hungary and has a phenomenal collection of works, including nearly two thousand books from the first year of book printing, and over 8,000 books printed prior to 1711. The library is open Monday to Saturday, but some parts  may be closed at times due to reconstruction.

At the southeast end is the Budapest History Museum, which has exhibitions of Hungarian culture from medieval times to modern. It is open every day except Tuesdays from 10 am. There is an entrance fee with a half price fee for students. To the right of the museum is St. Stephen’s Hall, a sumptuous example of European palatial interiors that was only recently completely renovated. Visits are by guided tours only, lasting about 20 minutes. Admission is free but places must be reserved in advance.

At the southern end of the hill is the Mace Tower and the Deli Rondella. The Mace Tower was originally constructed during the 15th century, but was destroyed in the 1686 Battle of Buda. The present tower is a reconstruction. The Deli Rondella served as an important part of the castle’s defenses during the medieval period. It is complete with thick walls, steep slopes, gun shades, and mini tunnels. 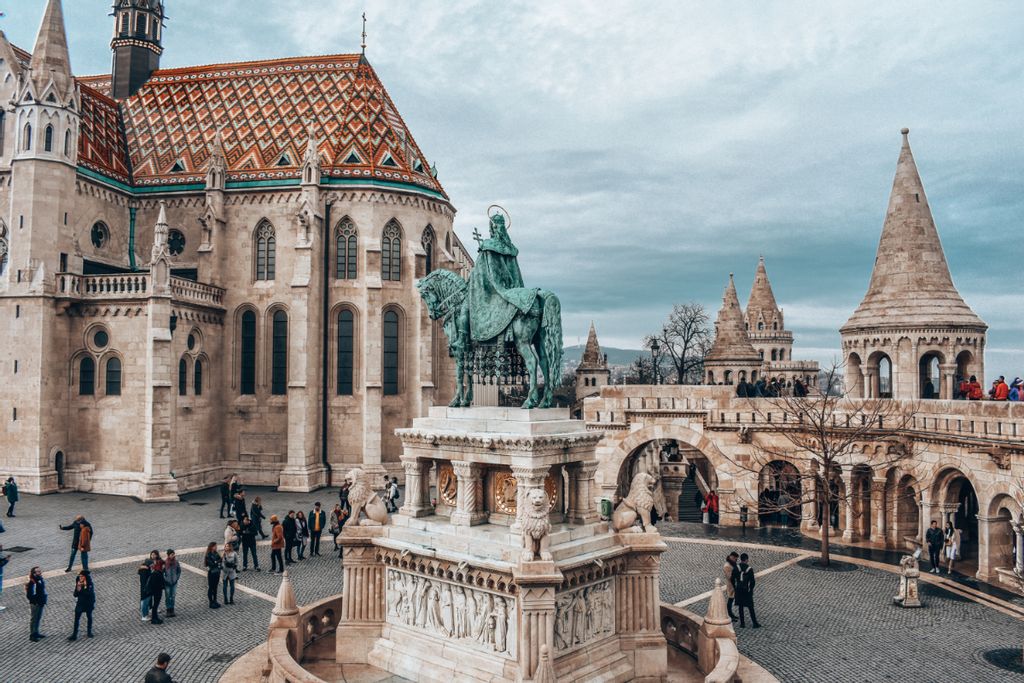 From here, return back through the courtyard and Hunyadi Court until you arrive back at St. Gyorgy Square. Keep walking with the square to your right and Sandor Palace in view across the square. On your left is an area of ancient ruins which serve as an archaeological museum. Visiting the site is dependent upon whether or not the site is open, however, a stroll reveals views of ancient stone walls and foundations. Immediately to the north of the ruins is the Archduke Jozsef’s Palace, currently under reconstruction. The open space on the right is the site of Saint Sigismund provost’s church. It was constructed in 1410 but severely damaged in the 1686 Battle of Buda. A plaque marks the site. From here, you can cross over to Sandor Palace and its neighbor, the Carmelite Monastery.

Walking to the end of the monastery, you will encounter an intersection with one of the archways leading to the castle grounds on the left. Across the street is the Castle District. An absolute must-see is Matthias Church. It’s roughly a ten-minute walk down the road. The church was established in the 14th century and named for King Matthias. It too was badly damaged in the battles and sieges of Castle Hill’s history, but it is one of Budapest’s most treasured landmarks. Entrance is free though tickets are necessary to visit the tower. Right next to the church is the Fisherman’s Bastion. This is an incredible 19th century castle-like structure with seven turreted towers and a panoramic view over the Danube and beyond.

There is more to see in the Castle District, including Vienna Gate and the Castle Hill Labyrinth. The area near Matthias Church also has many restaurants and cafes. Come evening, the whole area is transformed as the buildings are lit up. There are night tours as well, which can also tell you about some of the myths of Castle Hill, including one about vampires!

Exploring the area of Buda Castle and the adjacent Castle District will put you in touch with some of Budapest and Hungary’s most important historical people and events. With lots to see and lots of walking to do, you can easily spend a day exploring the area. It would be most handy to have an experienced and knowledgeable private guide with you. A GoWithGuide professional will make sure your visit to Buda Castle is all you hope it will be.

Plan your trip to Budapest