Top 6 Most Popular Foods in Paris

You don’t need us to tell you that Paris is one of the best cities in the world when it comes to enjoying fine dining and great French cuisine. If you are lucky enough to find yourself traversing the City of Lights, it would be a shame not to properly try out some of the greatest foods that this international capital has to offer. The easiest way to enjoy truly great French food is to hire one of our Paris tour guides to show you all the best places the locals gather to enjoy some of the finest fare this side of the Rhine. 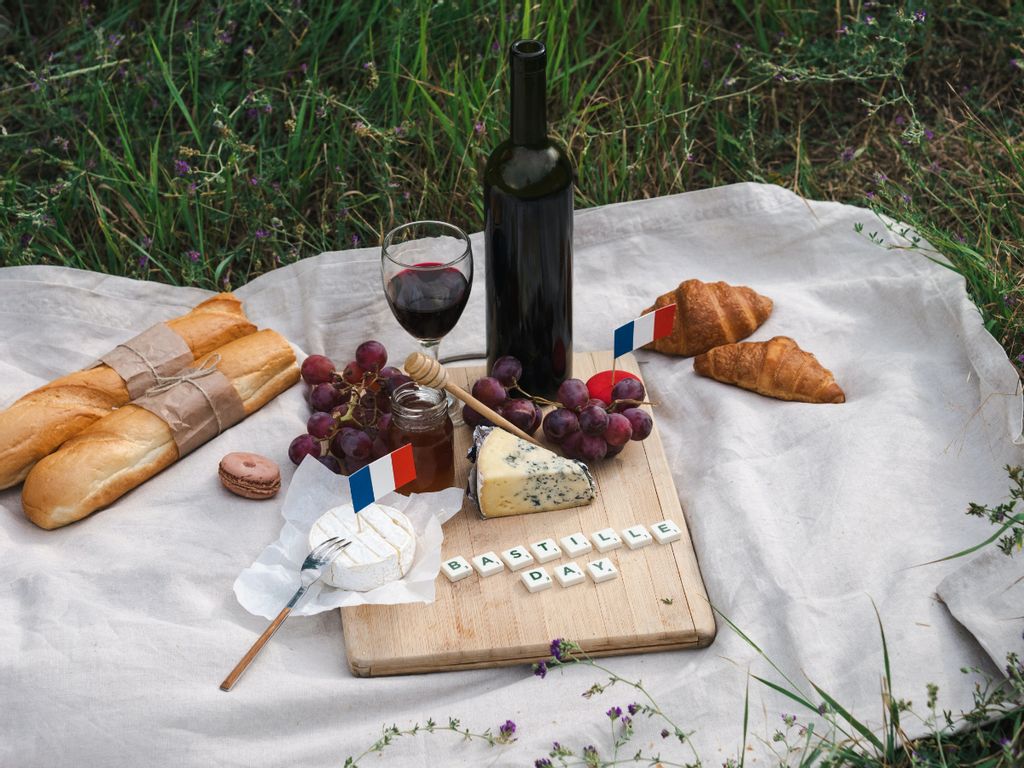 Bread is considered a staple yet unexciting food by many cultures around the world, but your idea of good bread may be challenged by the exceptional bakeries that line the streets of Paris. Enjoying a carefully crafted handmade French baguette or croissant will be sure to alter your idea of great bread! These warm freshly baked breads are perfect for a traditional Parisian breakfast paired with a generous helping of butter, honey, or cheese (and of course some good coffee).

There are hundreds of excellent bakeries in Paris that specialize in traditional French breads such as Du Pain et des Idées, famous for their flaky, buttery croissants - perfect for a light meal. We would also recommend a visit to L'Epi Dupin for some delicious baguettes baked with organic butter. You can also ask your Paris private guide for their personal recommendations as every self-respecting Parisian local will have their own favorites.

If you are looking for bread that can be enjoyed while strolling through the streets and parks of Paris, you should definitely try Jambon-beurre. Literally translating to ‘ham-butter’, this popular street food consists of a fresh baguette served with a large helping of sliced ham and salted butter. Over 3 million of these sandwiches are sold in the city every day, making it one of the most popular quick meal options. 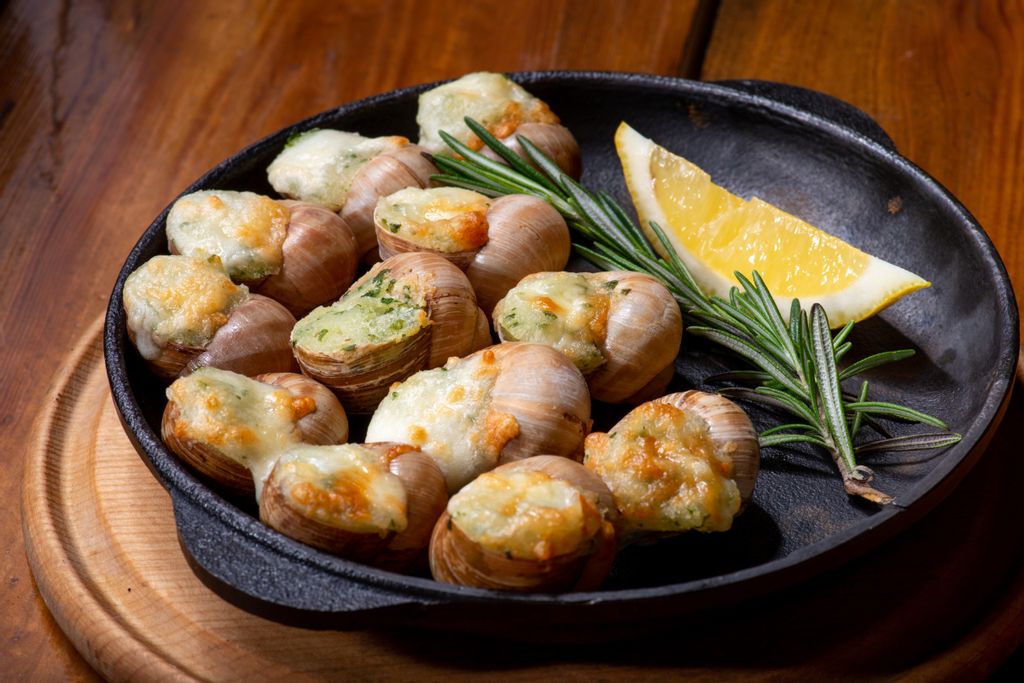 A famous French and Mediterranean dish, escargot refers to edible snails usually cooked with garlic, butter, and/or wine. While some people may be put off by the idea of eating snails, it is considered a delicacy in France and frequently served as a starter in high-end restaurants. The meat of the snails themselves are most commonly eaten, but their eggs are also a popular dish and is known as white caviar.

If you’re a fan of oysters, escargot will be right down your alley. Enhanced by a variety of herbs including parsley, thyme, and garlic, they are usually eaten using special tongs and a fork called a fourchette à escargot. A standard serving consists of 6-12 snails served in special trays, and the snails are served in their shells. This delicacy can be enjoyed in several Parisian establishments, including La Jacobine, L'Escargot Bar, and the famous L'Escargot Montorgueil which has been serving escargot since 1832! 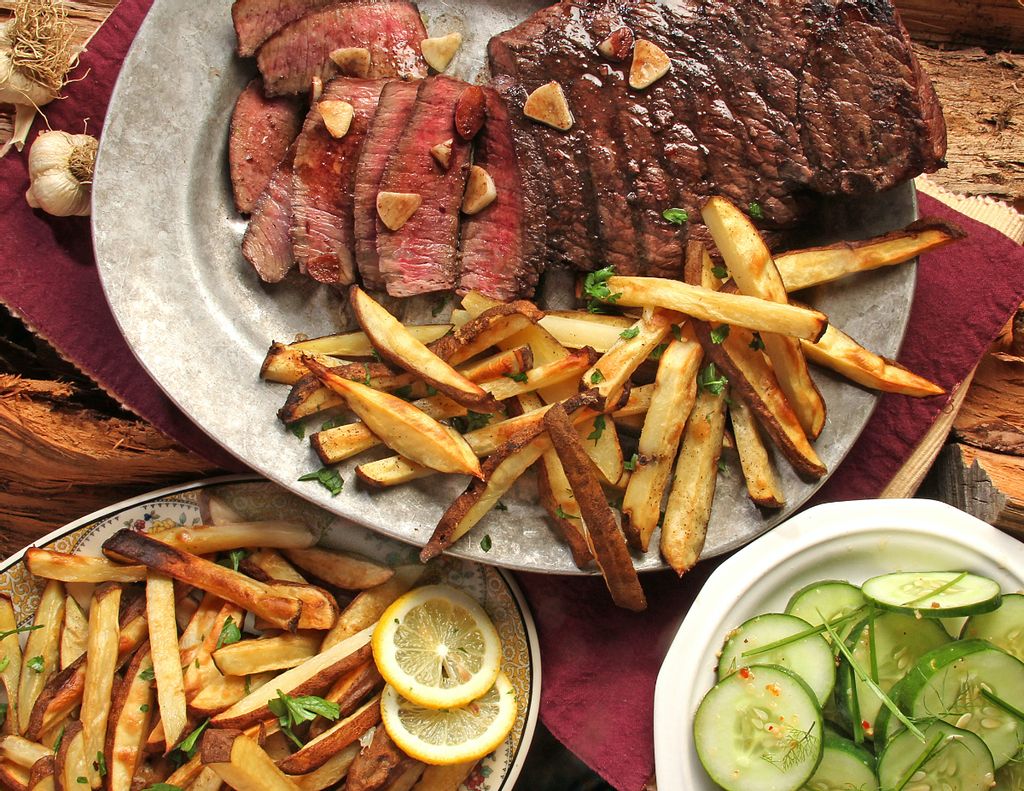 While Paris may have a reputation for delicate French cuisine, it is also a great place to enjoy a classic yet simple steak dinner. Enjoying a properly grilled steak with fries (frites) and a salad is a popular staple in many Parisian bistros as well as higher end establishments. Take note that it’s important to inform your waiter how you would like your steak cooked, so here’s some basic French terms that will come in useful.

If you prefer your steak rare, ask for “saignant”, if you like medium-rare, request “a point”, and if you want your meat well-done, ask for “bien cuit”. Most French restaurants recommend either rare or medium-rare, but if you’re feeling adventurous you can even ask for “bleu” or very rare steak. There are many amazing places in Paris where you can enjoy a great steak, from more affordable bistros to super premium Michelin-starred options. Call on one of the Le Relais de l'Entrecôte venues for a great meal of steak-frites at a reasonable price, or if you’re in the mood for something fancy make a reservation at the Michelin-starred Le Jules Verne located in the Eiffel Tower! 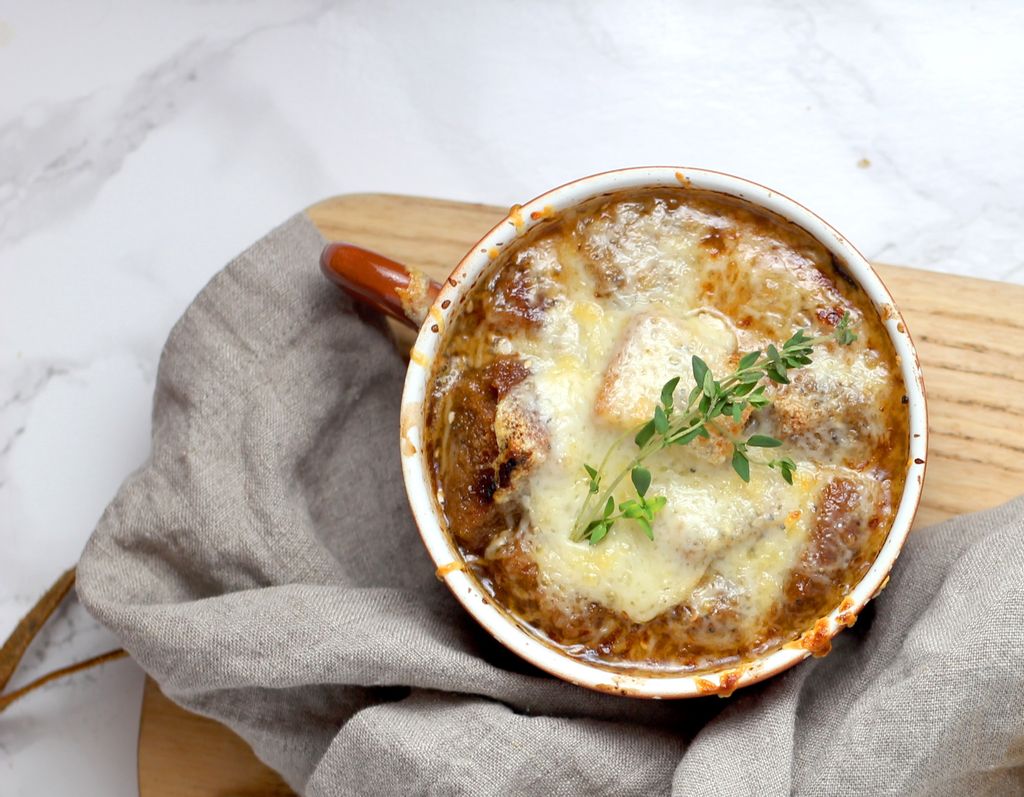 This may sound like a strange inclusion in this list, but anyone familiar with classical French onion soup will know that this is no ordinary side dish. Known in French as ‘soupe à l'oignon’, this traditional dish is made using caramelized onions and beef broth, and frequently topped with melted cheese and a crouton - simply delicious.

Visitors can enjoy this surprisingly filling soup at numerous places around the city. If you’re busy indulging in some retail therapy with a shopping trip to the famous Les Halles, you can also enjoy some of the best French onion soup in Paris here. This rich soup is particularly refreshing during colder months but can be enjoyed year-round. While usually enjoyed as a starter, versions with extra sides can also be enjoyed as a light meal in and of itself. Check out L'Ambroisie for a high-end version of this traditional soup, but it can be found at most eateries around the capital. Your French tour guide will also be able to point you in the right direction for a helping of this staple. 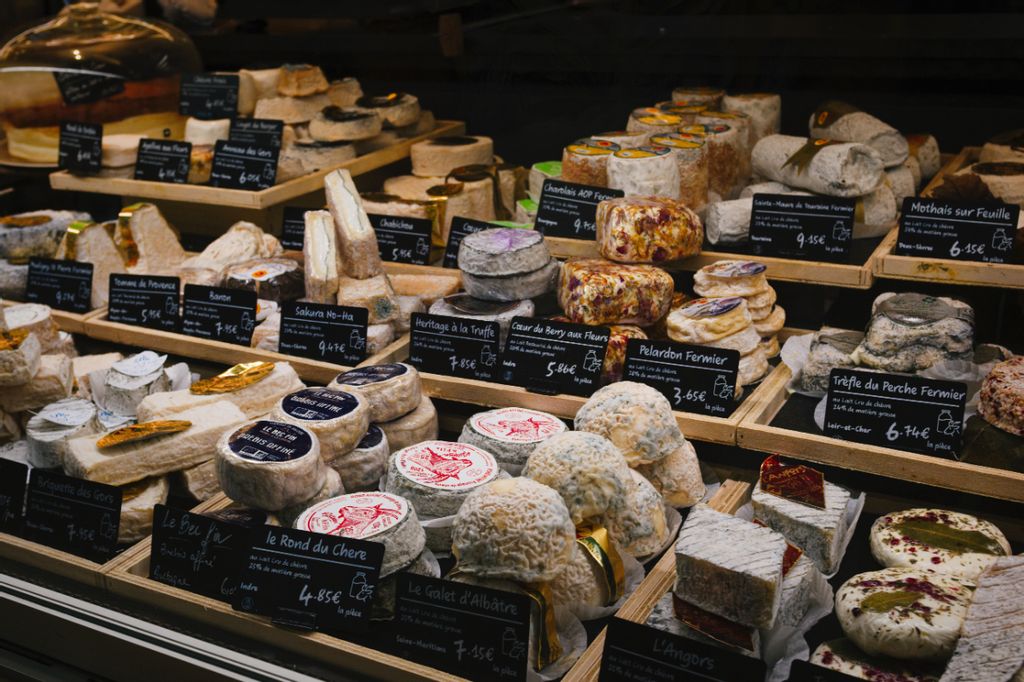 France is famous for its myriad varieties of cheese, and Paris is a great place to try out some of these diary-based delicacies. There are many great cheeses to try, with some of our recommendations including Camambert, Époisses, Brie, and Roquefort (among many others). Many establishments serve cheese platters either as a starter or dessert, frequently paired with a delectable red wine and freshly baked bread or crackers.

French cheese can be enjoyed during your travels, but unlike many of the options on this list you can also purchase some to take home with you. Some of the best cheese shops in Paris include Androuët, Fromagerie Quatrehomme, and the outdoor market of Marché d'Aligre. If you are intending to buy some delicious French cheese to take home with you, it’s important to take note of the particular customs rules that may apply to your country. Some countries have strict regulations regarding the import of dairy products like cheese, so you may need to declare these at customs on your way back. 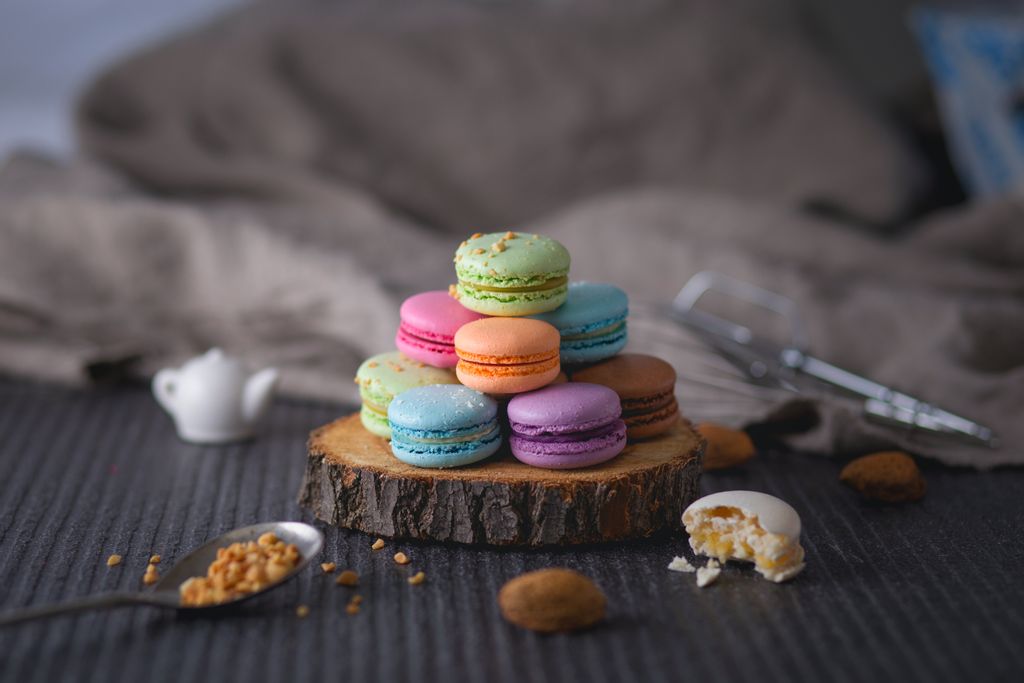 For our final recommendation we are going with something sweet in the form of the world famous French macarons. Most people are familiar with these baked treats, but the ones found in Paris are of a different level. These round meringue-based cookies feature a filling usually consisting of buttercream or ganache, and can be enjoyed accompanied by coffee at one of the city’s many cafes, or as a dessert at the end of a luxurious meal at a Parisian restaurant.

Some of the best places to enjoy macarons include Jean-Paul Hévin and Ladurée - the latter being in business since 1862 and considered one of the authorities on macaron creation. These treats come in various different flavors, including classics such as chocolate, raspberry, and vanilla, as well as more unique variations such as green tea, rose petals, coffee, and even foie gras and truffles. Ask your Paris private tour guide for their favorite macaron places to receive a true local treat.

The City of Lights is world-renowned for its culinary offerings, from hearty traditional bistros to the most elite Michelin-starred establishments specializing in ultra premium cuisine. If you are visiting Paris it would truly be a shame to not try out some of the city’s greatest foods. We would recommend hiring one of our private guides to assist you in your mouth-watering Paris tour. Our guides can not only provide translation services, but can also show you to some of their preferred locations that only true locals are aware of.