Buenos Aires has a reputation for welcoming all comers, seemingly with a philosophy that there is always room for one more. This has resulted in an eclectic mix of cultures, structures, and destinations. In this bustling cosmopolitan city, there are several hidden gems that you may miss during a cursory visit.

Our Buenos Aires private guides are steeped in local knowledge of the city and will expertly lead you to these lesser known attractions. Prepare to descend below the city’s surface, climb to great heights, and travel to the outer suburbs to see what these personalised Buenos Aires tours have to offer.

Underground at the theater 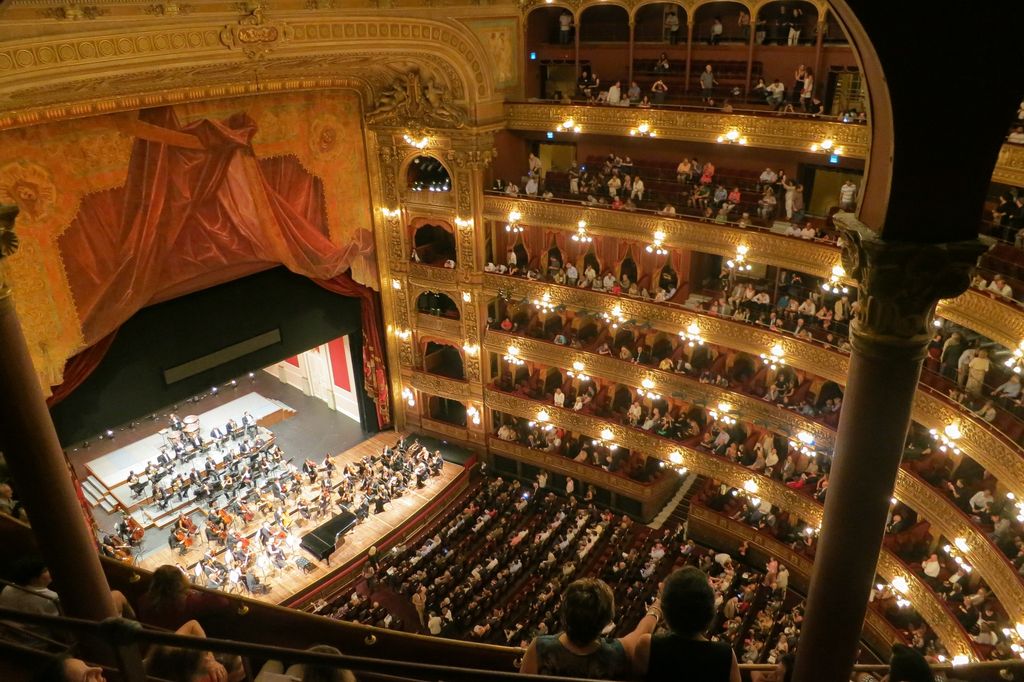 Located in the city center, the Teatro Colon is one of the most prestigious performing arts theaters in the world. The acoustics are on par with those of the likes of La Scala and Covent Garden. Teatro Colon is also one of the few internationally renowned opera houses that have their own workshops where sets and costumes are created on site.

The ‘Colon Factory’ is located underground in the enormous basement of the theater building. On Fridays, weekends, and public holidays the public is invited to experience what happens behind the scenes of the major productions performed here.

An interactive museum showcases historical props, costumes, sets, and programs of past events. Visitors can admire the exquisite handiwork up close, pose for photographs on the gigantic sets, and even handle the props.

The venue is popular with theater buffs from around the world. Access is limited so demand for tickets is high. Our Argentine tour guides will help to make the booking process smoother so that you can maximise your time in this world of fantasy. 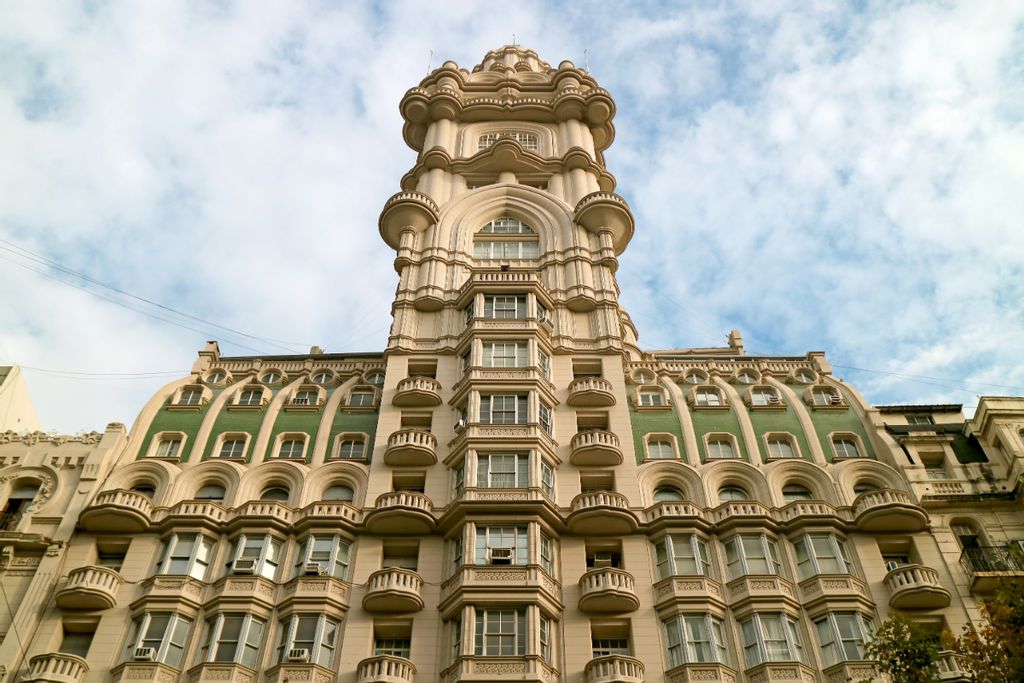 Still in the city center, we can find a production of a different kind. On Avenida de Mayo we find the Palacio Barolo, rich with symbolism, and once the city’s tallest building. At the top of the palacio is a lookout tower with an observation platform that offers a 360 degree, bird’s eye view of downtown Buenos Aires and beyond.

The building is an architectural representation of Dante’s allegorical poem, the Divine Comedy. The 22 floors correspond to the 22 stanzas of this premier Italian literary work. The foyer walls are inscribed with Latin verses, and nine vaulted archways radiate outwards representing the circle of hell that is Dante’s Inferno.

The journey to the top of the building is divided into three parts. Progress is made through hell and purgatory to heaven as you make your way upward. You can either choose to use the stairs, or travel in an antiquated elevator that was installed when the building was constructed.

At the highest point 100 meters above ground is a working lighthouse, a tribute to the 100 cantos of the Divine Comedy. The ornament at the top of the building depicts the Southern Cross constellation as it was aligned on Argentina’s Independence Day, 9 July 1816. The palacio is open all week except for Sundays and Tuesdays. Night time visits include a glass of wine, but be warned that some climbing is necessary and space at the top is limited. 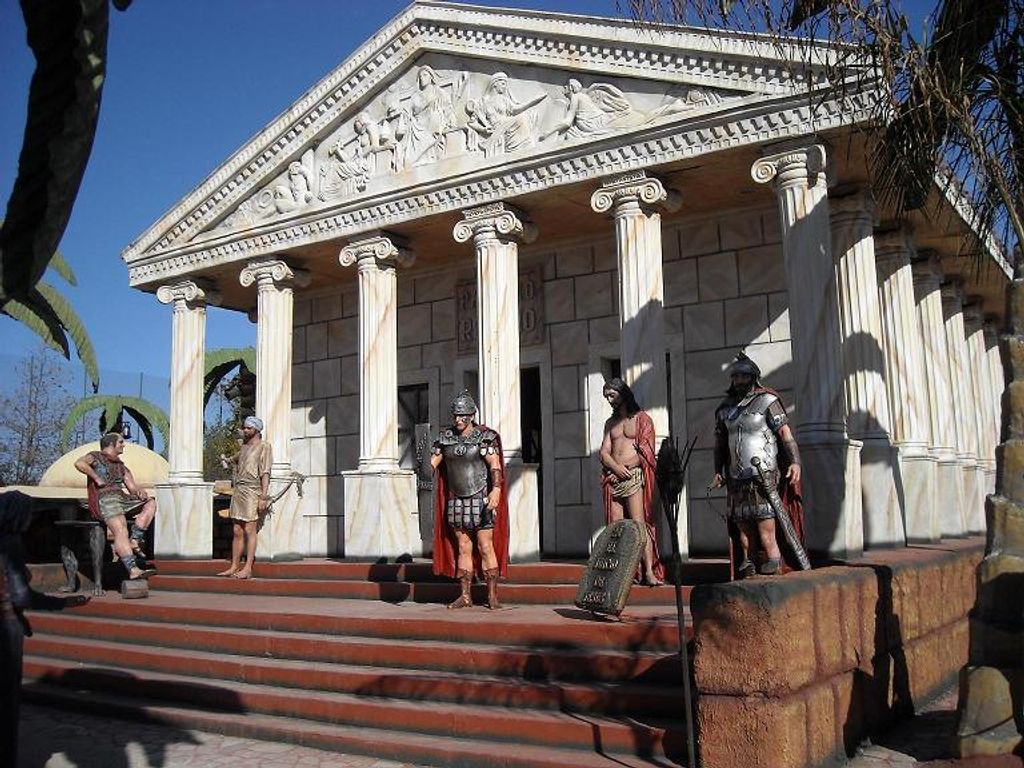 Like in most countries colonized predominantly by Christians, religion plays a large role in Argentinian society, and along the northern riverside of the city is a 7 hectare open air park called Tierra Santa which chronicles historical and religious events. The main features include a life-sized model of Jerusalem as it was in the first century, and a gigantic statue of Jesus that rises hourly out of a man-made mountain.

Biblical stories are told using various media, such as puppet shows, live musical events, and animatronic creatures. Actors dressed in period costume conduct life as it was in that era. Visitors are encouraged to interact with the tableaux, for example to partake of the ‘Last Supper’ alongside the manikins.

Other religions, cultures, and cuisines of the time are also showcased, and refreshments are available on site in Arabian and Armenian-themed restaurants. The attraction is open on Fridays and weekends, and opening hours are from 9 am to 9 pm in the cooler months from April to November, and from 4 pm to midnight in the remaining warmer months. Many of the exhibits are best viewed under lights at night. 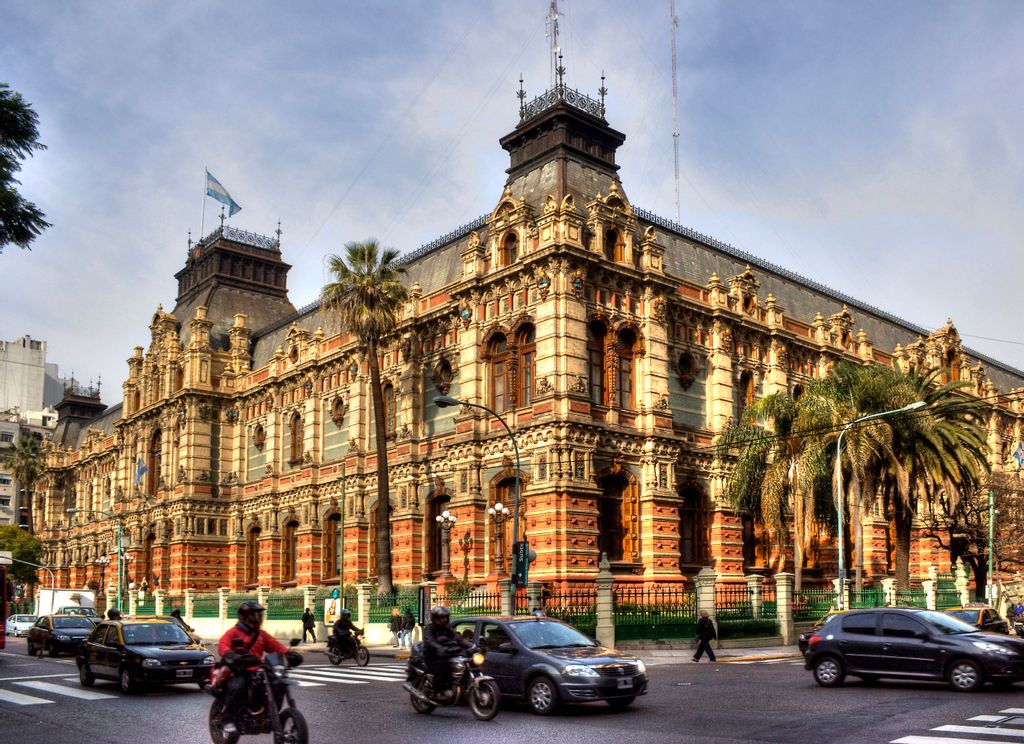 The Palacio de Aguas Corrientes or ‘Palace of Running Waters’ occupies an entire block in the northern end of the city, and was built in the latter part of the 1800s. At the time, the pumping station was a state of the art facility constructed to meet the water supply needs of a rapidly developing city.

The Scandinavian developers paid particular attention to the aesthetics of the exterior. Hundreds of thousands of glazed tiles and enamelled bricks imported from Europe and the Royal Doulton factory in England were used on the faćade. The structural ironwork in the interior is a Victorian era work of art. The weight of the twelve water reservoirs, holding 72 million liters of water, was distributed over three floors.

The building is owned by the Buenos Aires’ water company, and is currently the administrative headquarters of the organisation. It has been designated a national monument, and still functions as a pumping station. On display in a small museum is a collection of the tiles used during construction, as well as examples of indoor plumbing hardware as it evolved throughout the last century.

Opening hours correspond to the working week. The facility is open from 9 am to 5 pm from Monday to Friday, and is closed during lunch time. Booking in advance is advised. 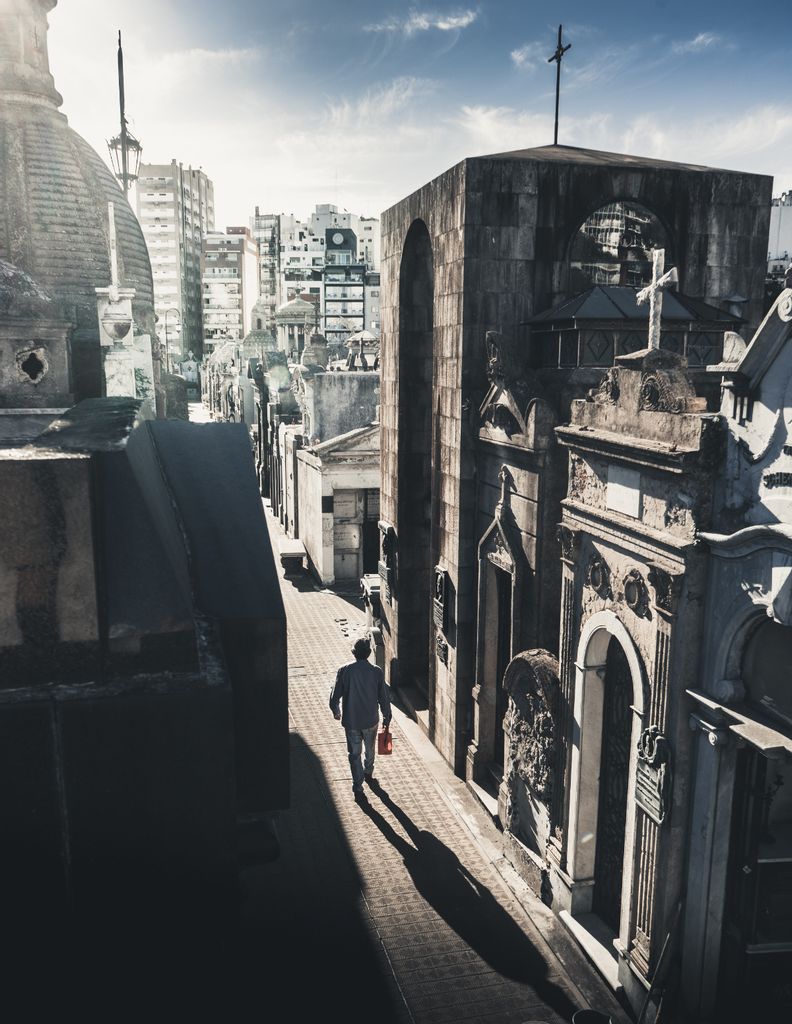 There are two notable ‘cities of the dead’ in Buenos Aires. The smaller 5 hectare Recoleta cemetery is the resting place of members of the country’s foremost dynasties and aristocracy. Various Argentinian politicians and other prominent figures are remembered here, the most visited crypt being that of Evita, the much loved young wife of former president, Juan Peron.

The cemetery reflects the hybrid architectural history of the city. It was designed by a French engineer who commissioned Neoclassical entrance gates, flanked by tall Greek columns. The mausoleums are constrained by space in this urban setting but not in grandeur. Many were constructed out of marble and have ornate statues guarding their entrances.

In the lesser known Chacarita Cemetery, there is a different atmosphere. This 93 hectare national cemetery is located in the outer suburbs of the city. It is a sprawling necropolis that allows for larger individual burial plots and more flamboyant expression. Many of Argentina’s famous tango stars are buried here.

Most notable is Carlos Gardel, a national icon who died tragically at the age of 45. A statue of the suave singer and an elaborate mausoleum have become popular monuments to his talent, especially on the anniversary of his birth. Dedicated fans often leave lit cigarettes in the statue’s hand.

Some notable musicians are depicted playing their chosen instruments. For example, tango composer Osvaldo Pugliese is seated at his piano, and Anibal Troilo plays his bandoneon, a type of concertina popular in Argentina. Also buried nearby is Carlos di Sarli, an orchestra leader. Our Buenos Aires private tour guides are well versed with these fascinating landmarks, and can help organize a curated tour just for you. 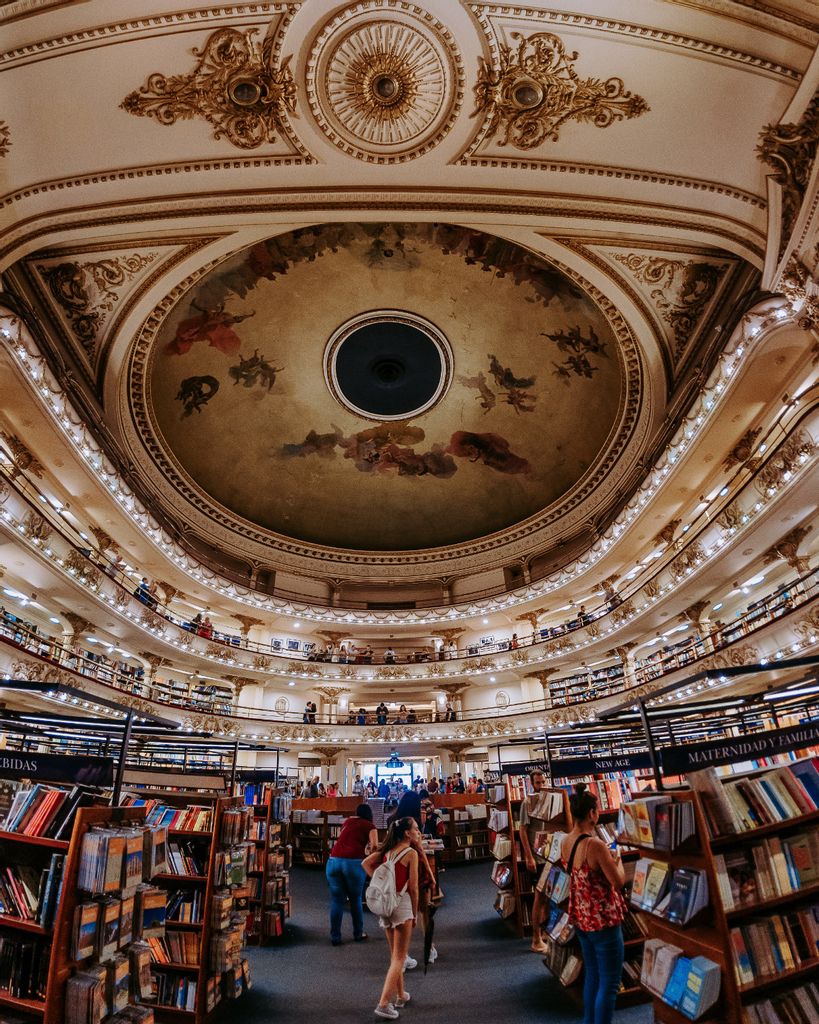 Several parts of Buenos Aires have been re-purposed to allow for additional growth. Among the many other hidden gems not mentioned here, you can find a grand theater that has been converted into a bookshop and a network of tunnels that were discovered beneath the cobblestoned streets built during the colonial era.

Our Buenos Aires tour guides can take you on a personalised tour of these and many other destinations that most visitors to the city do not get to experience.

Plan your trip to Buenos Aires