Yamaguchi features a wealth of nature and traditional history, making it a perfect destination during your stay in Japan. A national park, the largest cave system in Japan, and one of the biggest in all of Asia, one of the five great bridges of Japan, and a beautiful castle. Here are our Yamaguchi sights in detail: 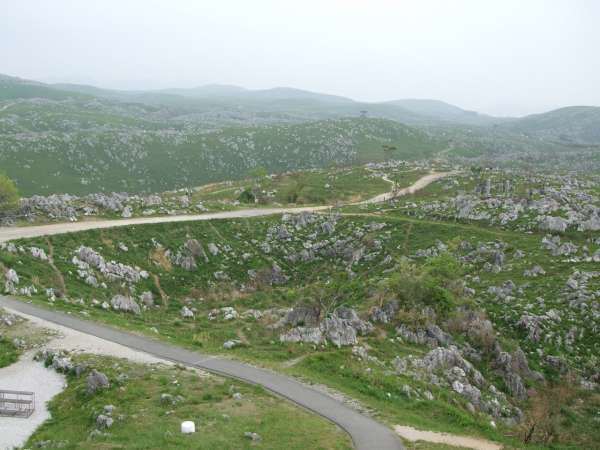 Akiyoshidai Quasi-National Park is a natural treasure trove that measures 17km from east to west and 8km from north to south. The spring is the ideal season to take a stroll there when the heights of the plants are low. Spring wildflowers such as red pasque flowers and Japanese valerian, and the sounds of wild birds are refreshing. In the summer, the entire area is covered in fresh greenery. Blue sky as far as the eye can see and the large green land are joined by white limestone rock which create an attractive landscape that cannot be seen elsewhere. Enjoy Mother Nature while viewing the amazing starry sky at night. The fireworks festival that occurs at the end of July consists of approximately 1800 explosions falling onto the karst. Autumn is a magical season. Pampas grass shimmering in the sun and a sea of clouds can only be seen during this time. The winter scene of the grassland is also lovely. On the third Sunday of every February, there is the Yamayaki during which 1500 hectares of the large area of dry grasses are burned.  At the evening Yamayaki known as the Nobi-no-Saiten (Festival of the Wildfire), the fires spread through the dark of Akiyoshi Plateau where you can get a taste of the out-of-the-ordinary.

There are numerous limestone caves at Akiyoshi Plateau. Akiyoshi-do Cave is located 100m under the plateau and is Japan’s foremost large-scale limestone cave. The great beauty of the natural formations is filled with changes which will leave a big impression. The Taisho-do Cave at the northeastern end of Akiyoshi Plateau has a very rough impression from its 3-dimensional formation despite it being a relatively young cave. The ceiling and walls of Kagekiyo-do are as wonderful as a work of art and you can see features such as fossilized coral. For families and friends, head for Safari Land. You can view wild animals in a nearly natural environment from your car and then enjoy the adjacent amusement park. The Akiyoshi Plateau Auto Campground is the first campground in the prefecture to have an onsen. The quiet environment surrounded by Mother Nature is a hit with tourists. 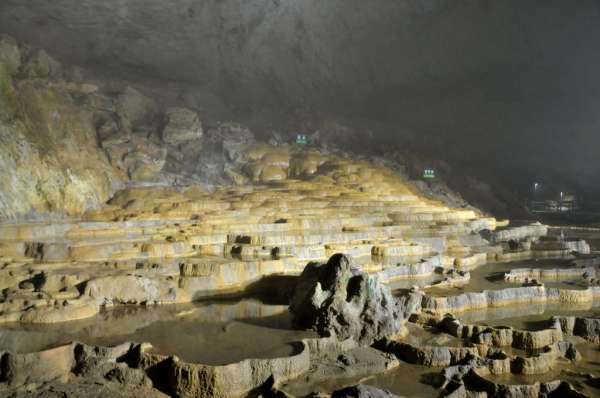 Only 1 kilometer of the cave is open for sightseeing but there is plenty to see there. Going past the waterfall at the cave entrance, you come to a massive space that just opens up in front of you. The light that comes in from the entrance into the 30m-high and 50m-wide space reflects off the river so that the ceiling takes on a blue tinge, thus the name The Blue Ceiling. Also, you will marvel at the other beautiful formations such as the Kasazukushi where countless numbers of limestone hang down like umbrellas, and the Gankutsu-Ou (King of The Cave) group of stalagmites that resemble armored warriors. There are also the popular Kogane Bashira (Golden Pillar) whose 15-meter structure hangs down like a lace curtain and the Hyaku-mai Zara (100 Plates) which consist of over 500 disc-shaped formations. Along with the conventional route, there is also the Adventure Course which involves scaling the rock face, the Romantic Exploration in the Dark which involves walking inside the cave without any lighting with just a flashlight to lead the way, and many other courses.

There are many other limestone caves along with Akiyoshi-do at Akiyoshi Plateau. Oddly enough, you can enjoy a tour of the caves which have different attractions although they are all in the same location. Kagekiyo-do Cave has an interior that is so beautiful that it seems like a work of art. The limestone on the ceiling and walls have taken on beautiful patterns over the centuries and you can even see fossilized coral and seaweed. There are unique shrines in the limestone caves which create a mystical atmosphere. At the northeastern tip of the Akiyoshi Plateau, there is Taisho-do. Compared with Akiyoshi-do and Kagekiyo-do, it isn’t as big but it has the unique feature of a 3-dimensional formation that is separated into 5 layers. There are also other interesting ways to enjoy the tour through routes such as the Yoromeki Passage where barely a person can pass through and the Romantic Wicket in which if a couple passes through while holding hands, it is said that love will blossom. 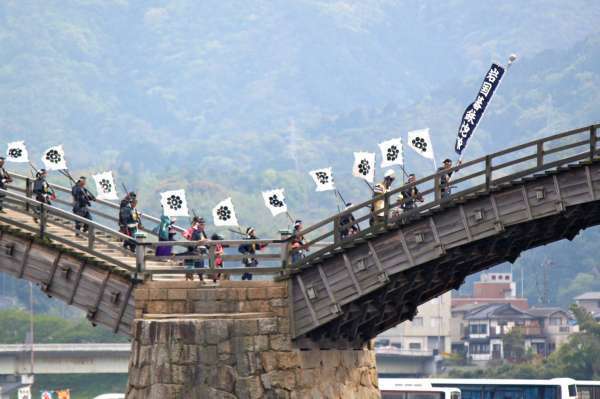 The Nishiki River was selected to be a moat to protect a castle. However, the Nishiki which was 200m in width often overflowed its banks and would wash away any bridge due to flooding from time to time. This worsened the effect on the administration of the clan living there. But the Kintai Bridge with its width of 5m and 5 continuous arches with a length of 93m was something that was unique even in the world. Arched bridges had a structure which further increased their strength greatly from the pressure at the top of the bridge due to sturdy construction techniques. From the river beach of the Nishiki when you see the underside of the bridge, you can view the beauty in the dynamic construction. Also the streamlined abutment that goes against the stream has the effect of lightening the water pressure, and the paving stones laid out in the surrounding area provides reinforcement for the base of the abutment. Even now, any flooding during downpours goes as high as the upper part of the abutment, and if any sunny weather continues, the river beach dries up becoming a parking lot.

The most beautiful season is the spring. 3000 cherry trees are reflected on the river surface which then surround Kintai Bridge. You can board pleasure boats known as Sakura Boats to enjoy the view of the river. Annually on April 29th, the Kintai Bridge Festival is held. The main event of the festival is the Daimyo (feudal lord) Procession that resembles the Sankin Kotai (the system of alternate attendance) during the Edo Era. Approximately 60 people playing parts of the lord of the castle and his wife and other characters parade over Kintai Bridge and through the streets of the castle town. Also, performances with matchlocks by the gun corps of the Iwakuni feudal clan are spectacles to behold. 20 armored archers appear on the river beach below Kintai Bridge, and under the squad leader’s orders, the roaring sounds of the matchlocks resound in the area. In the summer, cormorant fishing for ayu (sweetfish) can be observed and the illuminated bridge can be viewed while riding yakatabune. The August fireworks festival has 6000 fireworks firing up into the night sky with the incredible spectacle being reflected on the river surface. Kintai Bridge and the colors of autumn are also lovely. The snowscapes of the bridge are superb scenes that can only be seen several times a year.

The Sengoku (Warring States) Era was a time when it was commonplace for castles to be built on flat land. However, Iwakuni Castle was built at the top of the north end of the 200m mountain ridge that projected out on the large peninsula by the Nishiki River. The river was a natural moat as it encircled the castle in three directions except the south. The mountain castle built in 1608 would be dismantled after a brief 7 years due to the Ikkoku-Ichijo (one castle per province) order given in 1615, but it was rebuilt in 1962. The tour of the castle begins with the view from Kintai Bridge. As you cross the 5 continuous arches of the bridge, and then get on the ropeway from Kikko Park at the foot of the mountain, you reach the top only to find that there are 2 routes to the castle. The wide left route heads for the rear of the castle while the right mountain route heads for the castle tower. By all means, take the mountain route since it will take you to the remnants of the Otemon Gate and the stone wall that will evoke those days which cannot be done if you take the wide route. Both sides of the high wall measure 19.6m in width and the dry moat measures 20m in depth; these two were included as some of the defensive measures for the castle. The top floor was built so that it was larger than the lower floor, a feature that was unusual for the time, and the view from the Southeast Asian-influenced castle tower which omitted the roof in the space between the two floors is refreshing. Head home on the wide route. The huge well known as Ohtsurui which has also been called an emergency exit is a must-see.

Kikko Park was once the residence of the feudal lord. On its large grounds, there remain many valuable examples of architecture. Middle-class samurai housing spanning 250 years known as the Mekada Residences have been designated as National Important Cultural Properties. The Kinunkaku was built facing the moat of Kikko Park as a shrine building for votive picture tablets and has the appearance of a Japanese painting. The Kikko Shrine has been similarly designated as an Important Cultural Property and has a main shrine, a front shrine , a shrine gate and other structures that were built in the same time period that are extremely valuable.

Plan your trip to Yamaguchi

I can not say enough good things about Michi. She was punctual,pleasant, and easy to understand. She was very knowledgeable about the city and how to get around it. We changed itineraries several times and she never blinked she was super Unfortunately she helped my wife find everything she wanted to buy. If you need an excellent guide who happens to be a nice person you can not go wrong wi...
read more

Plan your trip to Yamaguchi