Nara is a place famously known for two things, temples and deer. Some of the oldest, largest, and most interesting temples can be seen in the area, including historical treasures that remain from a time when Nara was the ancient capital of Japan. Here are our top five temples to visit during a day trip to Nara: 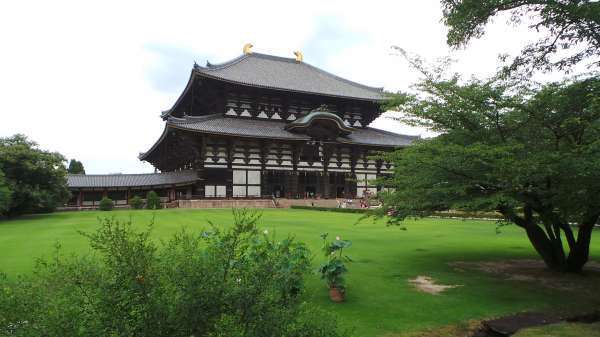 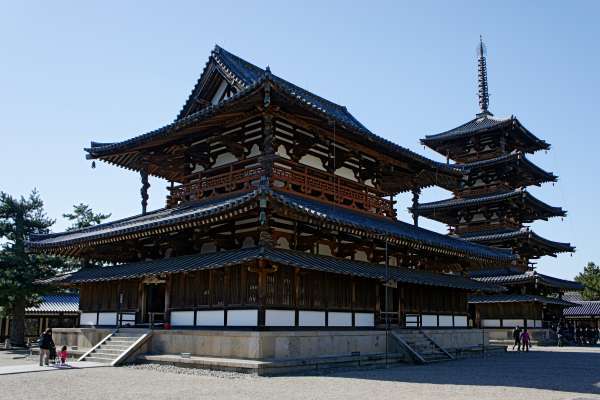 For over 1,400 years, the beauty of Horyuji has continued to fascinate its visitors. Immerse yourself in the mysterious legends and intriguing historical facts of Japan’s oldest wooden temple.

The area with a group of buildings including Japan’s oldest wooden structure is collectively called Horyuji. Recognized for its exceptional historical and cultural value, Horyuji is Japan’s first World Heritage site.

On the 187,000 square meters premises of Horyuji stands the Saiin Garan (the Western Precinct) built in the Asuka Period (7th century) and an array of buildings built in subsequent years with the cutting-edge technology of the time they were constructed in. There are more than 2,300 buildings and treasures of which approx. 190 items have been designated as a National Treasure or an Important Cultural Property. This land has been vigorously protected since its establishment in 607 as the site where the first nation state of Japan was formed; it is a place of extreme historical and cultural value.

While Horyuji is full of intriguing historical facts and mysteries, it is not a place of extravagance. The lack of glittering decoration is more than compensated by the virtuous and serene atmosphere exuded by the simple, sophisticated beauty from the old times. The temple is of course beautiful during the cherry blossom season in spring and the fall foliage season, but there is also a subdued beauty to the sound of Horyuji’s bell when you listen to it in the cold air of late fall or winter. Visit Horyuji and immerse yourself in the wonders and splendors of the temple’s 1,400 years of history. 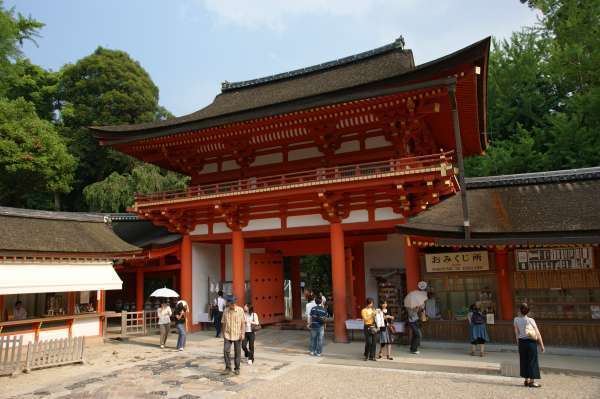 The World Heritage site of Kasuga Taisha (Kasuga Grand Shrine) was established to enshrine the local deity at around the time of the transfer of the capital 1300 years ago. The brilliant vermilion shinden in the primeval forest is magnificent and mysterious.

Kasuga Shrine which is located inside Nara Park has continued on from ancient times with its brilliant red shinden, its beautiful cloisters and an overwhelming impression to its guests. Its red appearance among the lushly green cedar grove at the bottom of Kasugayama Primeval Forest evokes that mystery of a sacred country of the Far East. The gorgeous main building that has also been registered as a UNESCO World Heritage site has splendor and grace. It has an appearance as a sacred place that would be appropriate to enshrine a god.

There are more than 1000 events throughout the year at Kasuga Taisha, but since there are many events that can be generally visited, come and visit according to your schedule. Within those, during the special services known as the Chugen Mantoro held within the cloisters in February and August, 2000 stone lanterns and 1000 hanging lanterns are lit which create a wondrous atmosphere. 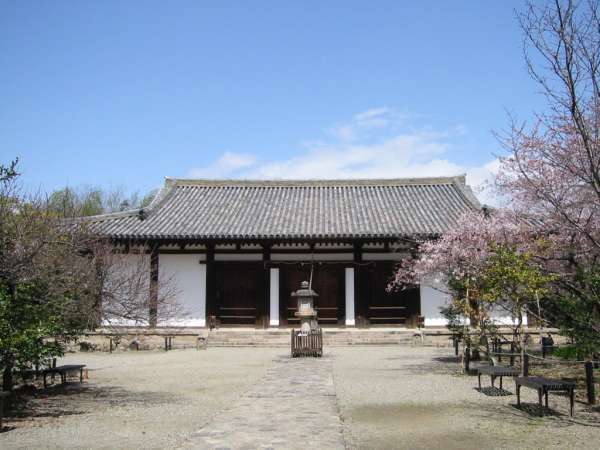 Shin-Yakushi-ji Temple was constructed in 745 by Empress Komyo in the hopes for Emperor’s Shomu’s recovery from illness with 7 statues of the Yakushi Nyorai enshrined within. At the time, more than 100 monks served in the huge grounds, and Kon-do Hall where the Buddhas were enshrined was even larger than the council hall at the Nara Imperial Palace. The temple was almost completely burned down due to a lightning strike in the year 780, and the hall that had been used as the refectory became the current Kon-do main hall. The Kon-do is a valuable building erected in the Nara Era which is simple yet strong, and it has the special characteristic of not having an attic, instead revealing the rafters for an open-ceiling appearance. The name of Shin-Yakushi-ji Temple does not refer to a “New Yakushi-ji Temple” but a “miraculous” temple enshrining the Yakushi Nyorai and has no connection with the Yakushi-ji Temple of Nishi-no-Kyo.

In the Nara Era, belief in the Yakushi Nyorai was at a peak as the Buddha overlooking the peoples’ physical and mental health, and the Buddha had in its left hand a medicine vase which contained a panacea of miracle medicines which could heal all disease. Surrounding the placid-faced Yakushi Nyorai are the brave Twelve Heavenly Generals with their steely-eyed expressions to protect the Buddha from all evil demons. Each of the generals is distinct from the others, with his own expression and stance. Challenging any demons who would disturb the penitent Yakushi Nyorai to battle, they are separated along the 12 points of the compass and command a total of 84,000 large armies, and even after chasing away them away, the generals eternally continue to stand vigilant so that the demons don’t come twice. Furthermore, according to current research, it has been discovered that the earth-colored Twelve Heavenly Generals had once been vividly painted in red, blue, green, gold and other colors. The Twelve Heavenly Generals, along with the Yakushi Nyorai, pray for a world without sorrow, and underneath their stern expressions, there is a benevolence to them, something that should not be missed. 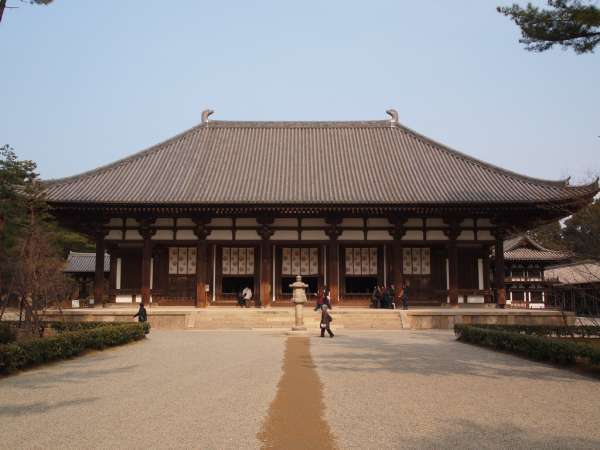 Toshodai-ji is the head temple for Risshu, one of the six sects of Buddhism brought to Japan. In 759, Jianzhen began a place of Buddhist meditation that was for students to learn the mores and principles that needed to be protected in the religion. At the time, there had been no high priest to instruct these precepts in Japan, and there was a huge problem with a decrease in the quality of monks. It is at that point that Emperor Shoumu invited Jianzen from China to establish the correct Buddhist precepts. After 5 failed attempts to cross over to Japan, he finally reached the country after losing his sight in both eyes. This great achievement is known widely in both Japan and China.

Despite the many temples that were burned down during times of war, Toshodai-ji still remains as a remnant from the Tempyo Era. Inside, the Golden Hall has retained its appearance since its establishment in the late 8th century. In the center is the principal image of Rushanabutsu, on the right is the statue of Yakushi Nyorai and on the left is the statue of Senju Kannon. All of them are statues from around the 8th and 9th centuries and have been designated as National Treasures. In addition, you cannot miss the Kodo Lecture Hall with its open space. Originally, this was the Higashi Choushuuden Hall moved from Heijo Palace and then restored. Since no buildings remain of the Heijo Palace, the hall is an extremely valuable building at this time.

To prevent the decay of Buddhism in Japan, Jianzhen took more than 12 years to reach his goal of getting to Japan. His statue at Goei-do Hall can only be viewed annually for just three days in June, from the 5th to the 7th. Measuring 80.1cm in height, it is Japan’s oldest portrait sculpture and is a work that is representative of the Tempyo Era. The appearance of him with his eyes closed is exceptional as an example of a portrait sculpture. The realistic representation is remarkable up to the faithful re-creation of Jianzhen’s indomitable spirit.

Looking for an authentic travel experience in Nara but still stuck at home? No problem! Why don’t you start by taking a Virtual Tour for a moment’s escape from the mundane and chaos with our professional guides in Nara?

We loved Hiro-san. He was great and showed us nice places in Kyoto and Nara. I highly recommend him.
read more

We have just returned from a 12 day trip to Japan. This was our first trip to Japan so I hired 4 different guides in 4 different cities. Toichi was by far the best guide our entire trip. By the time we got to him in Osaka we had done 2 tours and were exhausted. It seems Japanese culture is very structured and keeping to the structure and on time is a priority. While I can appreciate that, it...
read more

Akira met us at our hotel in Osaka, and followed our request to make use of our JR passes to get to Nara, even if it wasn't the fastest path there. Despite the tour focusing on Nara, he was also helpful in giving us explanations of some of the different sights and areas of Osaka during the start of our train journey. Once in Nara, he asked for our preferences with regard to walking versus public t...
read more

“ Personalized excursions to Nara and Wakayama ”

I enjoyed two customized long days trips organized by Kay travelling from Kyoto to lesser visited temples, shrines and nature sights in Nara and Wakayama prefectures. My wishes for the trips were fulfilled thanks to Kay’s care and guiding input.
read more

Our Nara tour with Yuri went very well. She was able to share nice insights about the temples we've visited. Our tour was also cost-effective considering that she brought us to free museums within Nara. We also enjoyed the Mechanical Toy Museum where my 11 yr. old daughter had the time to play and learn the logic or process of certain toys. We also loved exploring a tradional Japanese house. ...
read more

Yasuhisa speaks perfect English and knows Nara and the surrounding cities and towns backward and forward. But more important, there's nothing he can't do. We asked him for a custom tour with lots of planning, unusual requests, and long hours. He accommodated it all, in some cases beyond what anyone could reasonably expect. He has my highest possible recommendation.
read more

Very good English. Great company and we took various mode of transport to reduce the walking. Nice speaking to a local to understand more of their culture.
read more

Yumiko is very knowledgable regarding the places we visited and its history. She planned the tour really well, while always accommodating to our requests. Our 2 days tour in Kyoto and Nara was enjoyable and relaxing, just like travelling with a friend who knows the places really well. Excellent guide. Highly recommended
read more