Nara is known for its many temples, but amongst the religious structures, there are plenty of other things to see and do in the area. We have selected four sights and attractions for a very different Nara experience: 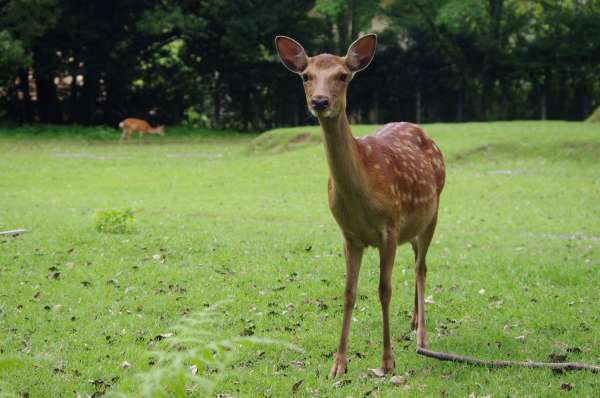 Ever since the capital moved to Nara in the year 710, people have loved this location for the many historical cultural properties found here, and for the historical feel of the area and its climate. On the massive 660-hectare site of Nara Park in the center of Nara, you will find such World Heritage sites as Todaiji, Kofukiji, and Kasuga-taisha, as well as the Nara National Museum, which houses a number of National Treasures, including works of Buddhist art. The many ponds create a beautiful scene among the green landscape, across from which are the gentle slopes of Mount Wakakusa and the primeval forests of Mount Kasuga, which spread out magnificently. The historical buildings have long coexisted harmoniously alongside the nature of this city park, which is more beautiful than any other in the world.

Nara Park is also famous for deer. Deer crackers (shika-senbei) are sold inside the park so you can enjoy feeding the deer, which are raised not with artificial feeding but as wild deer that are a Nationally Protected Species. Deer have long been valued as messengers from the gods, so they have continued to coexist in this park without fear of man. (Please beware that the deer can become boisterous during mating season.)

Nara Park is full of nature, but the beauty of that nature is particularly outstanding during the cherry blossom season in early April. The sight of the 1700 cherry trees within the park in bloom was selected as one of the top 100 cherry blossom locations in Japan. We hope you will thoroughly enjoy playing with the deer, and the beauty of the temples that have coexisted alongside nature for 1300 years at Nara Park, which is stunning in every season. 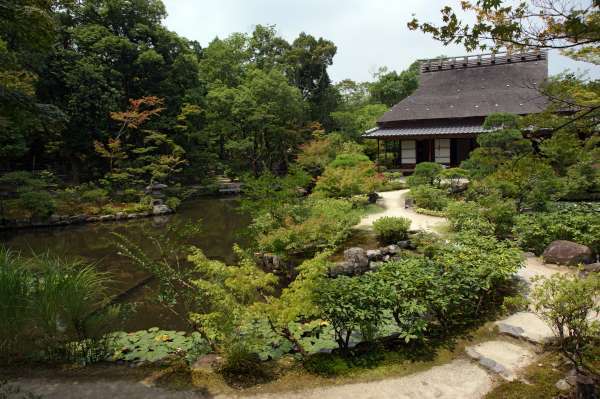 Isuien Park is a Japanese garden that was created during a relatively modern era in the former capital of Nara. The two gardens that were built by different owners in the Edo and Meiji Eras still retain that serenity. Taking into consideration the many historically significant cultural assets and structures from over a thousand years ago, Isuien Park, which was built in the 17th century, may be thought of as being a more recent property.

With Mt. Wakakusa in the background, the park is a soothing world with features such as the pond and hills delicately positioned and the old teahouse that was moved there. After thoroughly enjoying the World Heritage cultural properties and gaining some tranquility, you will most likely treasure the time that you spend at Isuien Park.  One feature at the traditional Japanese garden that is Isuien is that you are able to enjoy the front garden and rear garden that were built by two different people in two different eras.

The front garden that spreads out at the entrance of the garden proper was constructed in the early Edo Era in 1670 by Michikiyo Kiyosumi, a tanner from Nara. A thatched-roof house known as Sanshuu-tei was placed by the pond there as a place to enjoy sencha tea (a lighter tea than matcha). At the pond, stones representing a crane and tortoise, symbols of longevity, have been placed as small islands, and with the inclusion of stone lanterns, there is a feeling of an Edo Era garden. Currently, Sanshuu-tei has become a restaurant where you can enjoy a meal while viewing the garden.

The rear garden was constructed during the Meiji Era (around the late 19th century) by businessman Tojiro Seki as a place to enjoy the tea ceremony and poetry readings. It was built around a pond using the technique of shakkei (borrowed landscape) to bring alive the nature of Mt. Wakakusa and Mt. Kasuga in the background along with Nandaimon Gate of Todai-ji Temple and some man-made hills. The freely spreading landscape was deliberately and skillfully constructed as a scene to completely fill your eyes right up to the reflection on the pond’s surface. The sound and sensation of the waterfall built at the back of the pond are also wonderful, and the whole garden is something to enjoy the changing impressions of the scenery as you walk through it. Isuien Park is just that refined place for that serenity and peace of mind. 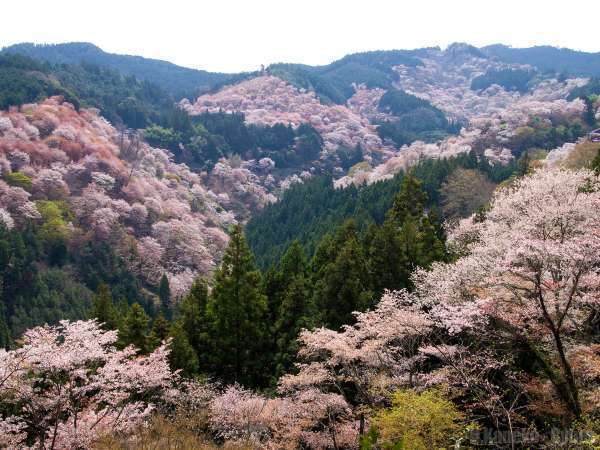 The sakura of Mt. Yoshino have had a close relationship with mountain worship from ancient times. During the Heian Era 1300 years ago, the mountain was opened as a sacred place for Shugendo (asceticism) with images of Bodhisattva carved into the cherry trees and enshrined as the principal object of worship in the shrines, so that the belief of cherry trees as sacred trees developed. For that reason, numerous cherry trees have been planted as seedlings being offered during memorial services for the dead.

Mt. Yoshino which has been worshiped as a utopia for the gods has not only charmed the devotees to religious practice but also the powers-that-be. The military commander Hideyoshi Toyotomi of the Warring States Era brought over a total of 5000 people in 1594 to participate in flower viewing, and there are legends such as that of the tragic Yoshitsune Minamoto in the late Heian Era. Many valuable buildings remain from those times; Kinpusen-ji Zao Hall, Yoshimizu Shrine, Yoshino Mikumari Shrine and Kinpu Shrine have been registered as World Heritage sites, and all of the shrines and temples that are scattered throughout the natural mountain have a beautiful and ancient aroma. In tandem with the nature on the mountain, a trip where you can fully enjoy first-class works of ancient Japanese art is exceptional. It’s also fun to choose homespun local food and souvenirs along the paths to the shrines. April is the peak time to see the cherry blossoms on Mt. Yoshino. But with its reputation as a famous site for flowers from long ago, it can also be enjoyed during seasons other than spring. There is the fall foliage and the snowscapes during winter, and it’s especially during the quiet seasons that a certain mystique can be felt. 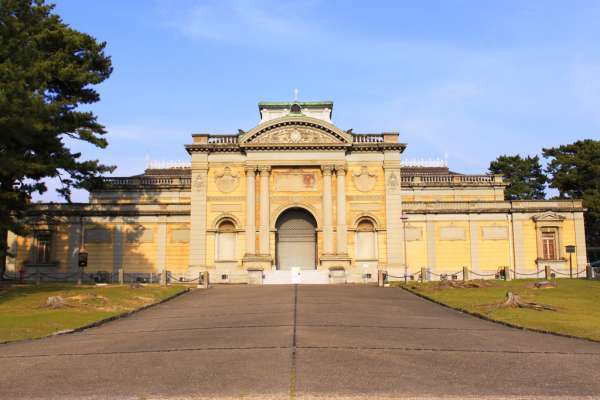 Numerous National Treasure-level masterpieces are exhibited centering on Buddhist art. It is also famous for the Shoso-in repository which is opened every autumn. You will want to see it during your tour of shrines and temples

The Nara Park area has plenty to see such as Todai-ji, Kofuku-ji and Kasuga Grand Shrine. Nearby is the Nara National Museum. Boasting the best in quality and quantity within Japan for Buddhist art, many Buddhist statues representing every era are exhibited. It is worth seeing these displays which cannot easily be seen at other museums of art. The museum consists of 4 galleries. There is the Nara Buddhist Statue Hall with its many exquisite Buddhist sculptures on display, the Ritual Bronzes Gallery which shows bronze artifacts from ancient China, and the East and West Wings for special exhibitions.

At the Nara Buddhist Statue Hall, many precious Buddhist statues ranging from the Asuka to Kamakura Eras are displayed. It has the reputation of having the most complete exhibit of Buddhist statues among the country’s museums. Also, it is notable for the fact the building itself has been designated as an Important Cultural Property. It is the very first genuine Western-style building to be constructed in Nara, completed in 1894. The design was by Toukuma Katayama who was also responsible for the Akasaka Detached Palace, and the building is in the style of the French Renaissance. The decorative ornamentation around the entrance is supremely elaborate and is representative of the European style from the middle of the Meiji Era.

The underground passageway that connects the Nara Buddhist Statue Hall and the East and West Wings is a zone that is also freely accessible for non-visitors. There are a museum shop and a restaurant where you can take a break. At the museum shop, there are plenty of original products starting from the exhibition catalog. The Uplifting Buddhist Statue series has charmingly designed statues placed on handkerchiefs, mirrors, and other items that cannot be obtained elsewhere. They are great as souvenirs.

Looking for an authentic travel experience in Nara but still stuck at home? No problem! Why don’t you start by taking a Virtual Tour for a moment’s escape from the mundane and chaos with our professional guides in Nara?

We loved Hiro-san. He was great and showed us nice places in Kyoto and Nara. I highly recommend him.
read more

We have just returned from a 12 day trip to Japan. This was our first trip to Japan so I hired 4 different guides in 4 different cities. Toichi was by far the best guide our entire trip. By the time we got to him in Osaka we had done 2 tours and were exhausted. It seems Japanese culture is very structured and keeping to the structure and on time is a priority. While I can appreciate that, it...
read more

Akira met us at our hotel in Osaka, and followed our request to make use of our JR passes to get to Nara, even if it wasn't the fastest path there. Despite the tour focusing on Nara, he was also helpful in giving us explanations of some of the different sights and areas of Osaka during the start of our train journey. Once in Nara, he asked for our preferences with regard to walking versus public t...
read more

“ Personalized excursions to Nara and Wakayama ”

I enjoyed two customized long days trips organized by Kay travelling from Kyoto to lesser visited temples, shrines and nature sights in Nara and Wakayama prefectures. My wishes for the trips were fulfilled thanks to Kay’s care and guiding input.
read more

Our Nara tour with Yuri went very well. She was able to share nice insights about the temples we've visited. Our tour was also cost-effective considering that she brought us to free museums within Nara. We also enjoyed the Mechanical Toy Museum where my 11 yr. old daughter had the time to play and learn the logic or process of certain toys. We also loved exploring a tradional Japanese house. ...
read more

Yasuhisa speaks perfect English and knows Nara and the surrounding cities and towns backward and forward. But more important, there's nothing he can't do. We asked him for a custom tour with lots of planning, unusual requests, and long hours. He accommodated it all, in some cases beyond what anyone could reasonably expect. He has my highest possible recommendation.
read more

Very good English. Great company and we took various mode of transport to reduce the walking. Nice speaking to a local to understand more of their culture.
read more

Yumiko is very knowledgable regarding the places we visited and its history. She planned the tour really well, while always accommodating to our requests. Our 2 days tour in Kyoto and Nara was enjoyable and relaxing, just like travelling with a friend who knows the places really well. Excellent guide. Highly recommended
read more