Looking to take advantage of the JR Pass (watch video), then Miyazaki Prefecture in Kyushu is a worthwhile destination. Famous for breathtaking scenery and beautiful islands, Miyazaki has a lot to offer. The perfect trip would be sure to include a trip to Aoshima, a sacred island full of Special Natural Monuments. Read on for our four destinations of choice, to help you plan the perfect Miyazaki trip:

Learn everything you need to know about the JR pass here. 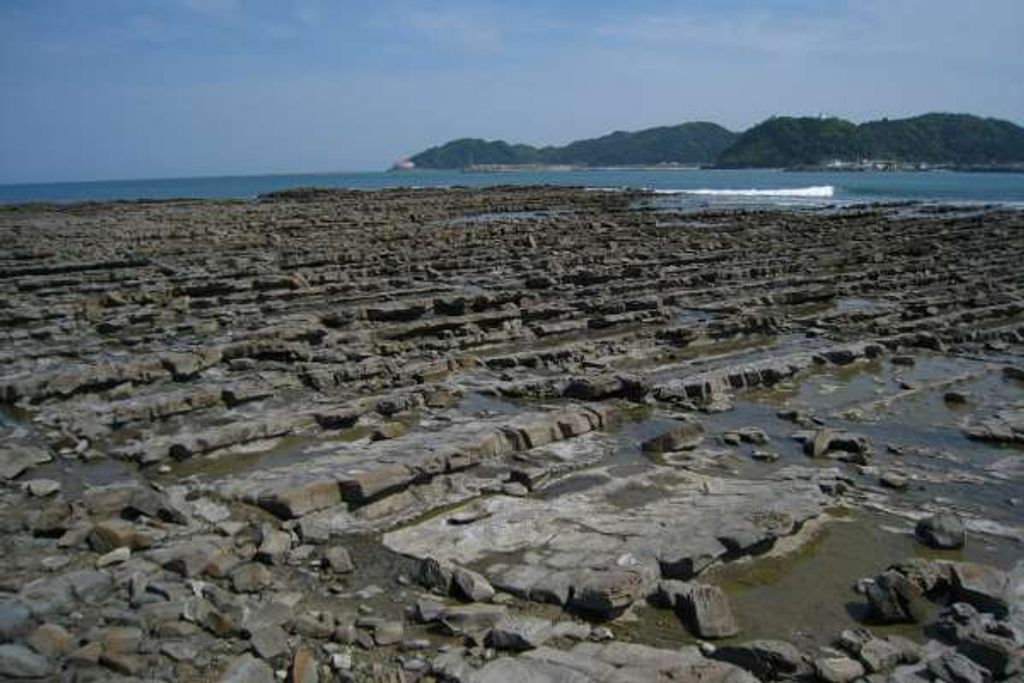 Aoshima, which can be accessed on foot from the Nishinan coastline over Yayoi Bridge, is a small island with a circumference of 1.5km that can be traversed in 15 minutes. Geological strata that range from about 8 million to 10 million years old have evolved due to erosion to become these distinct formations which surround the island, and during low tide even at a distance of 100m offshore, a splendid sight can be observed. Due to these strange rock formations’ resemblance to a washboard, they have been given the name of The Ogre’s Washboard. Since they cannot be seen at high tide, it’s recommended that tourists adjust their schedule accordingly to fit low tide. On the island, Livistona palm trees and climbing shrubs over 300 years in age join many other subtropical plants which have been recognized by the nation as Special Natural Monuments.

The entire island of Aoshima was originally considered to be a holy site so entry was restricted. Within the island, the beautiful vermilion Aoshima Shrine was established, and its vermilion torii gate along with The Ogre’s Washboard make for a spectacular sight. Since olden times, the shrine has been worshiped by people looking for love in marriage and the Shinto ritual of Wadatsumi Harai has been popular with tourists. In this ritual, a slip of paper on which a wish has been written is placed in the Tama-no-I Well which is bubbling with fresh water, and if the slip should dissolve, then the wish will be granted. The well is a power spot since it is said to be the meeting place of two figures from Japanese mythology, Yamasachihiko and Toyotama-hime. Also, to the right of the main shrine building is the Onarimichi (road for persons of high rank), another power spot which is a small road with many palm trees and an overflowing feeling of the South Seas where an ancient religious ritual known as the Motomiya was held. At the front of Yayoi Bridge which leads to Aoshima, there is the Aoshima Subtropical Botanical Garden which is free of admission. It has 2500 examples of subtropical flora of 429 different species including clusters of the Special Natural Monument of Livistona palm tree, and in the greenhouse, there are beautiful flowers blooming all year round so this is a place that is well worth visiting. 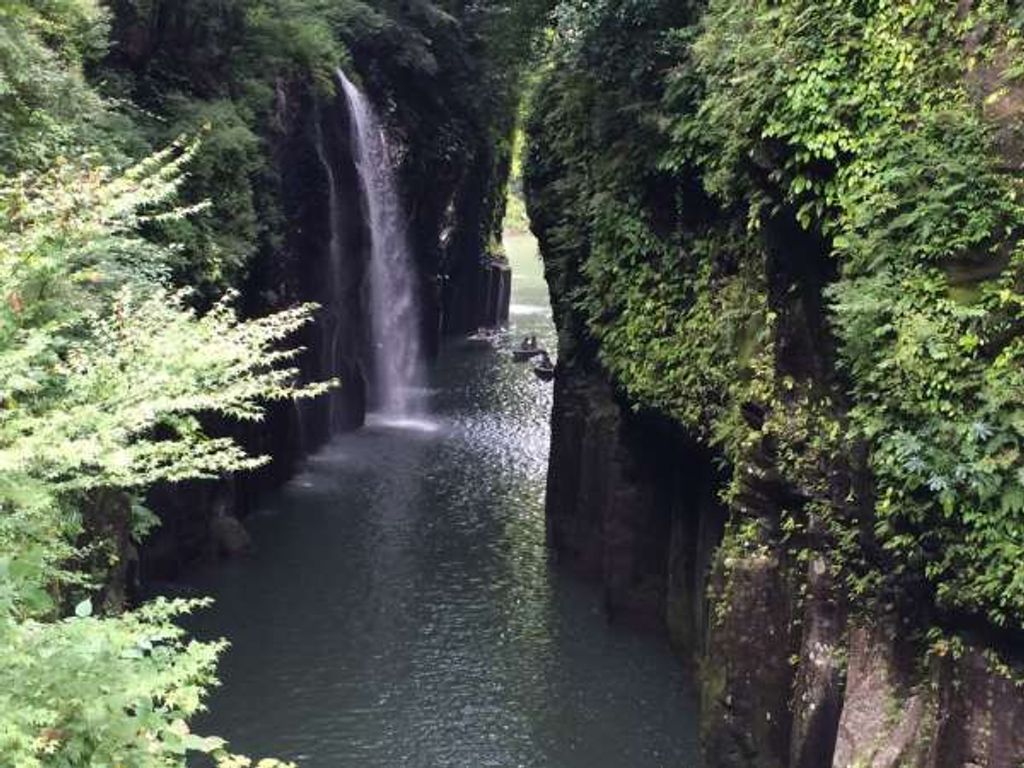 Takachiho is a nature-filled town located in the northern part of Miyazaki Prefecture and surrounded by soaring mountains which is known as “The Village of Myths” for its status as a place where many legends have been told and for its many shrines. You will want to visit here with a rental car or through a tour. In the town, Takachiho Gorge has been designated as a Place of Scenic Beauty and a Natural Monument; the gorge runs for 7km with 50-100m high cliffs carved out from volcanic activity. A symbol of the gorge is the 17-meter-high Manai Falls which has been selected as one of Japan’s Top 100 Waterfalls. You can rent out a paddle boat to get that awesome view of the falls from the bottom. As well, it’s also possible to view the gorge from the top via the walking trail. The three-arched Sandan Bridge is a unique place even for Japan where you can get that view with a difference from the trail.

Takachiho Shrine boasts a history of 1900 years and its main building has even been designated as an Important Cultural Property. Two gigantic trees whose trunks are fused together known as the Fuufu (Couples) Cedar are said to provide good fortune in matchmaking, household security and perpetuation of the family line if the couple joins hands and goes around the trees 3 times. In addition, the kagura dances that are famous within the Takachiho area are a local festival that gives thanks to a good harvest and prays for stable lifestyles, and the dancing ceremony brings the gods and the local people together as one. At the Kagura Hall within the shrine, Takachiho yokagura night dances can be seen nightly from 8pm under a reservation system. You will want to experience the culture of the kagura where the gods of Japanese mythology dance. At Kunimigaoka, which is a famous point at an altitude of 513m, there is the perfect view of the sea of clouds in the chill and quiet of an early morning in autumn. Regardless of the season, though, it is also a popular spot to view the Takachiho Valley during good weather. 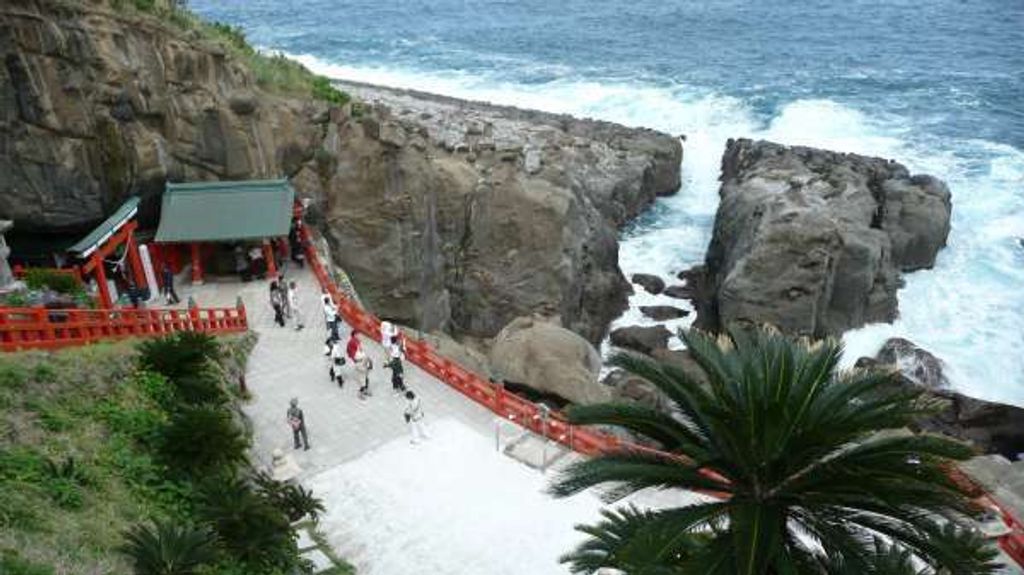 When it was originally constructed is unknown but there are records that state that Udo-jingu Shrine was restored in the year 782. It is a place of worship for matchmaking, conjugal bliss, pregnancy, safe childbirth and other reasons. Udo-jingu is also a unique shrine whose bright vermilion main building is located inside a cave at the end of a cliff atop Cape Udo which protrudes into the Pacific Ocean. Around the cape that is buffeted by rough waves, there is a series of distinctive rock formations so that the shrine is also notable for its beautiful panoramic view.  Among these formations along the seashore, the Kameishi (Turtle Rock), so named for its turtle-like shape, has a depression at which unglazed ceramic balls known as undama (fortune balls) are thrown for good luck. Men throw the balls with their left hand while women throw them with their right hand. The kanji character for “fortune” is carved into each undama which can be purchased for a ceremonial fee.

Known as a place for the legends of Japanese mythology, the cave where the main shrine building of Udo-jingu is located was the site where the goddess Toyotama-hime gave birth to the son of Yamasachihiko. He had been warned not to peek but due to worry Yamasachihiko took a peek and discovered that Toyotama-hime’s true form was a dragon. Toyotama-hime was deeply ashamed and saddened, and fled back to the sea. It is said that in her requests for her child to be loved and raised in good health, her own breasts were attached to the interior of the cave. Even now, in the cave behind the shrine building, two breast-shaped rocks known as Ochichiiwa remain which attract visitors who come to worship for safe childbirth. They are popular for the pure water that drips from them known as Ochichiame (Breast Rain), and when it is drunk by pregnant women, they can nurse their babies in a healthy manner.  The site for the Ochichiame within the shrine is cooled in summer and heated in winter, and drinks are provided with the Ochichiame water mixed with ginger. The site has been worshiped since ancient times for a safe childbirth, nursing and good health. 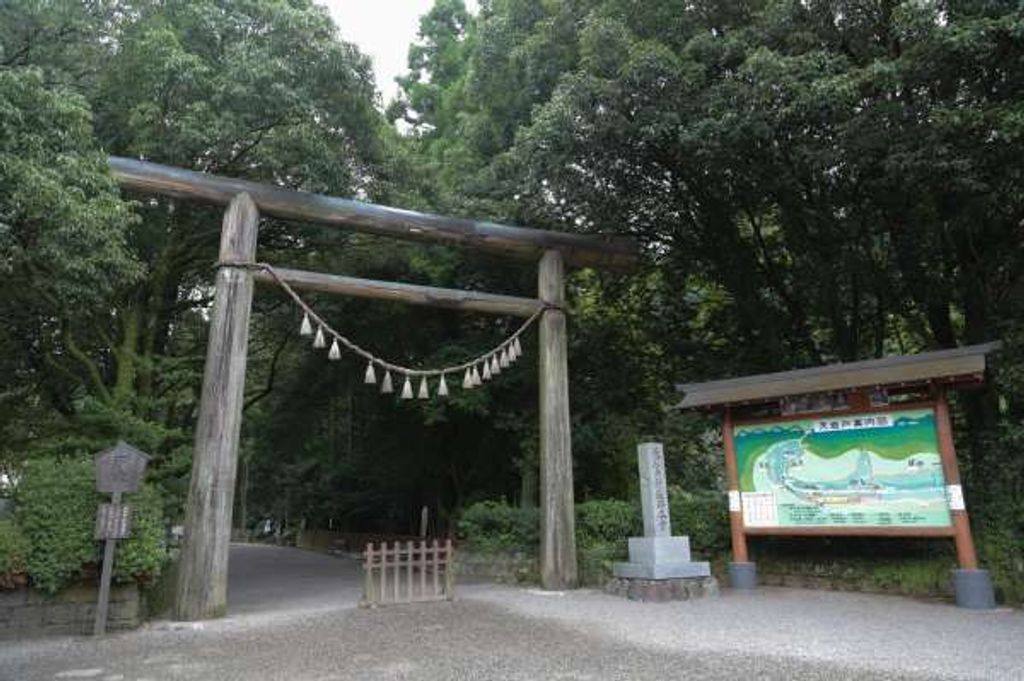 There are 2 shrines standing on the other side of the Iwato River from east to west, with the East Shrine enshrining the goddess Amaterasu and the West Shrine dedicated to Amanoiwaya. As recorded in the ancient historical chronicles of the Kojiki and Nihon Shoki, Amaterasu-omikami grew angry at the recklessness of her younger brother, Susanoo-no-Mikoto, and she hid in the cave Amanoiwaya thus thrusting the worlds of the sky and Earth into darkness. Many plagues and disasters then happened which brought out numerous evil spirits. The gods which were troubled by the events conferred with each other before erecting an evergreen tree in front of Amanoiwato (the door to the cave), placing a comma-shaped bead and a mirror on the tree and then dancing merrily. Amaterasu, hearing the gods’ laughter, was able to be lured out of the cave by flinging out the door which brought back the light to the world. Amanoiwato was treated as sacred land which became the site for the West Shrine of Amanoiwato Shrine. A visit to the West Shrine requires registration at the conferment office since visitations are only allowed under the guidance of a Shinto priest. The cave for Amanoiwato is located across from the West Shrine halfway up the wall, and it can be viewed from the observation point located behind the hall of worship of the West Shrine. At the West Shrine, there is a statue of a god throwing the door, but at the East Shrine, there is an amusing statue of a dancing god and holy water coming out from the roots of a cedar tree.

About 10 minutes’ walk away from the West Shrine, there is a cave known as Amano Yasukawara where the gods conferred. In the past, there was only a shrine that was worshiped but praying with a stack of stones started the tradition of piling many of these stacks to answer prayers so that the presence of these countless stacks has lent a mysterious atmosphere to the area. Make your way here to feel that magical atmosphere.

Plan your trip to Miyazaki