Kamakura played one of the most important roles in Japanese politics during the Kamakura period, about 800 years ago. The Kamakura shogunate was established at the end of the 12th century, and lasted for more than 100 years. Since the beginning of modern times, famous artists and writers have lived in Kamakura, and it has become the stage for several dramas and novels. Even today, there are many old shrines, historic sites, and cultural properties in Kamakura. There are more than 100 temples and shrines. In addition to famous Tsurugoka Hachimangu Shrine and Kotokuin Temple known for the Great Buddha, there are many small temples and shrines. Let’s explore together the historical city Kamakura! 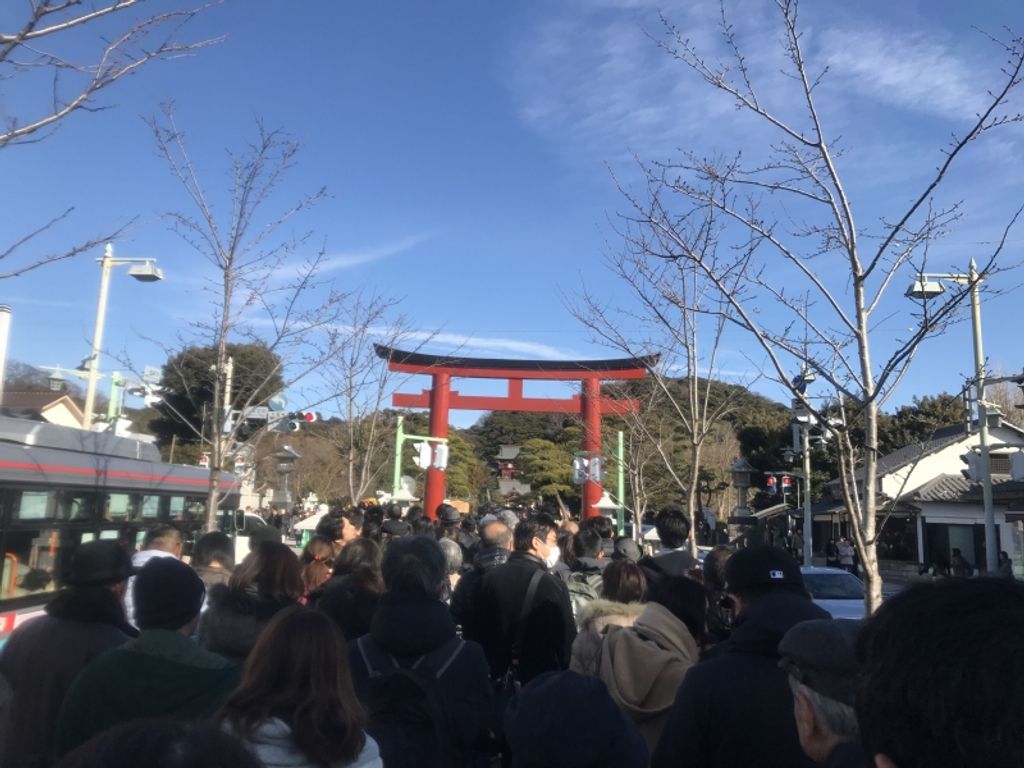 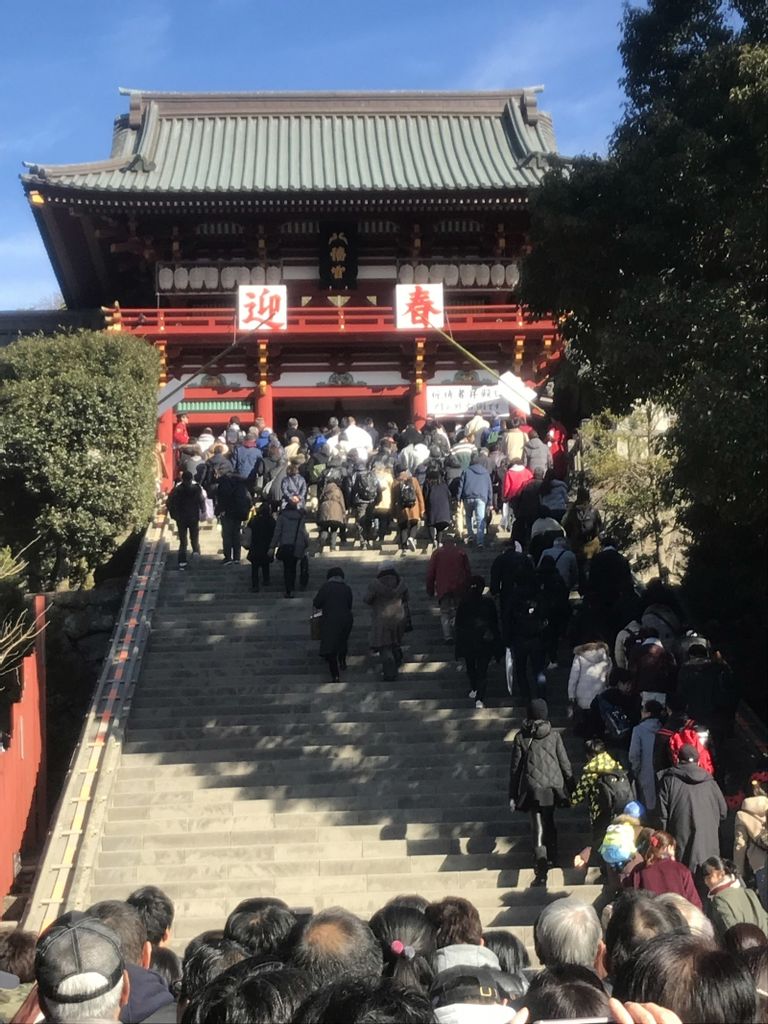 You can see two Chinese characters at the entrance gate. They mean “Happy New Year!”. 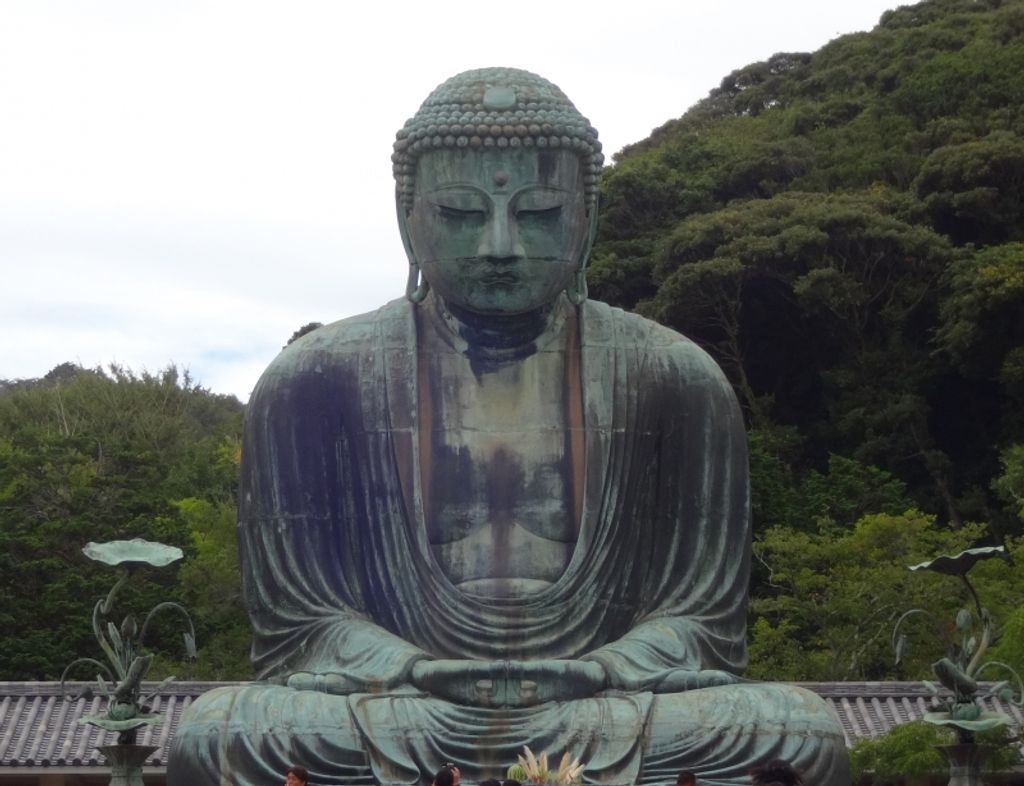 Great Buddha is a national treasure and located in Kotokuin Temple. It is unknown when this temple was established, but it is said Great Buddha was made in the 13th century. It sits in the open air. Its height is about 11 meters and weight is about 121 tons. 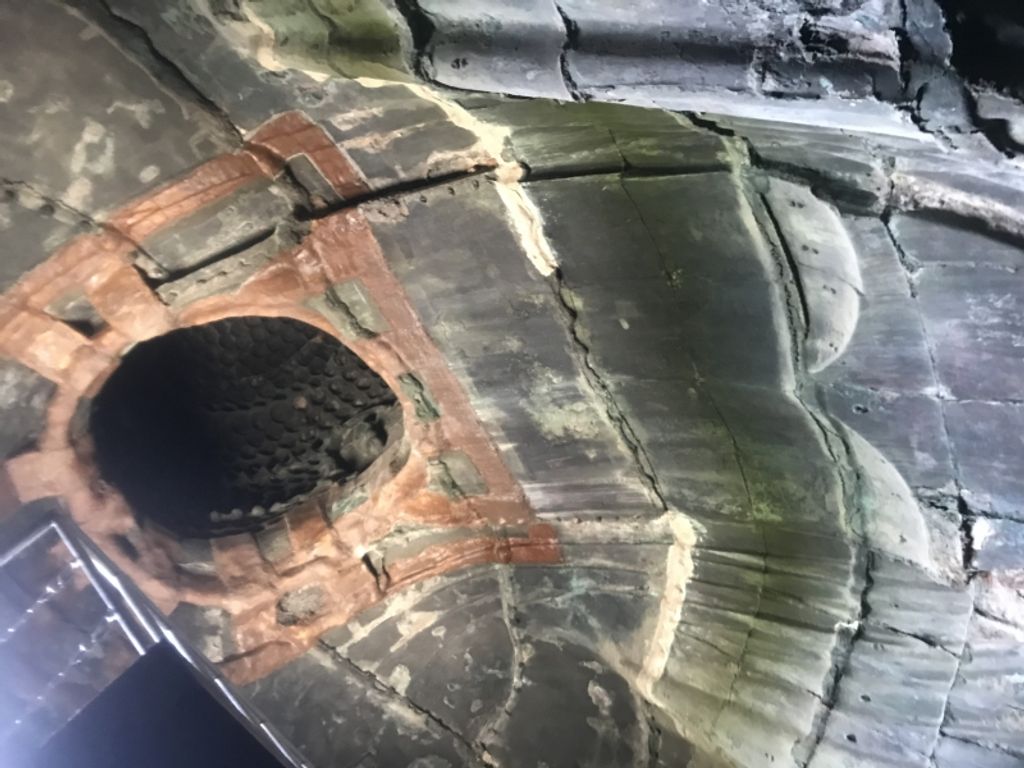 You can go into the Buddha if you like. This picture shows the inside of the Buddha. The hole at the left is the head of the Buddha. You are now in the national treasure! 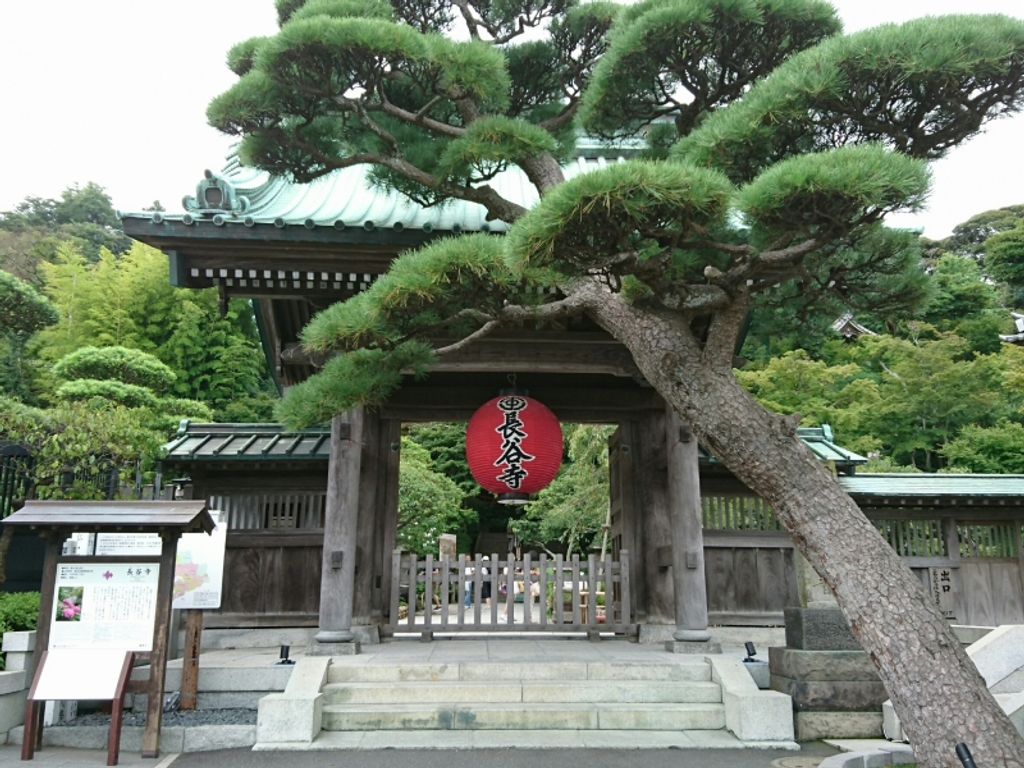 It is said that Hasedera Temple was established in 736. Its principal image of the Buddha is a Kannon Bodhisattva which has eleven faces. It is about 9 meters tall and one of the biggest wooden statue in Japan. Sorry, no pictures because taking pictures is prohibited in the Kannon hall. 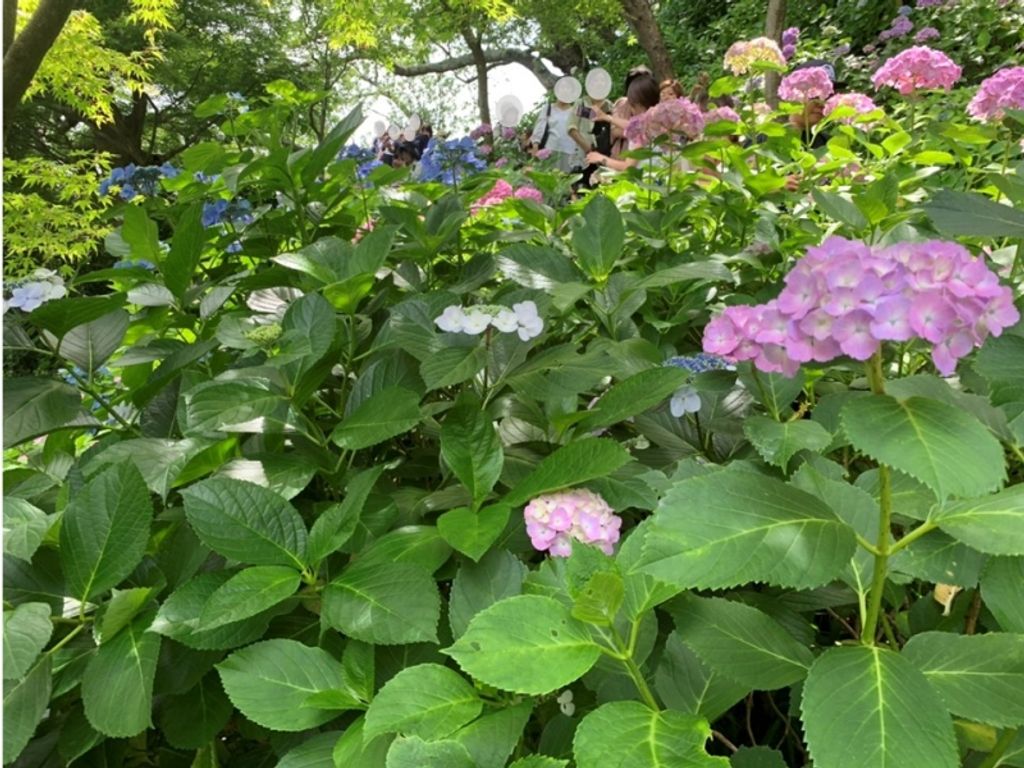 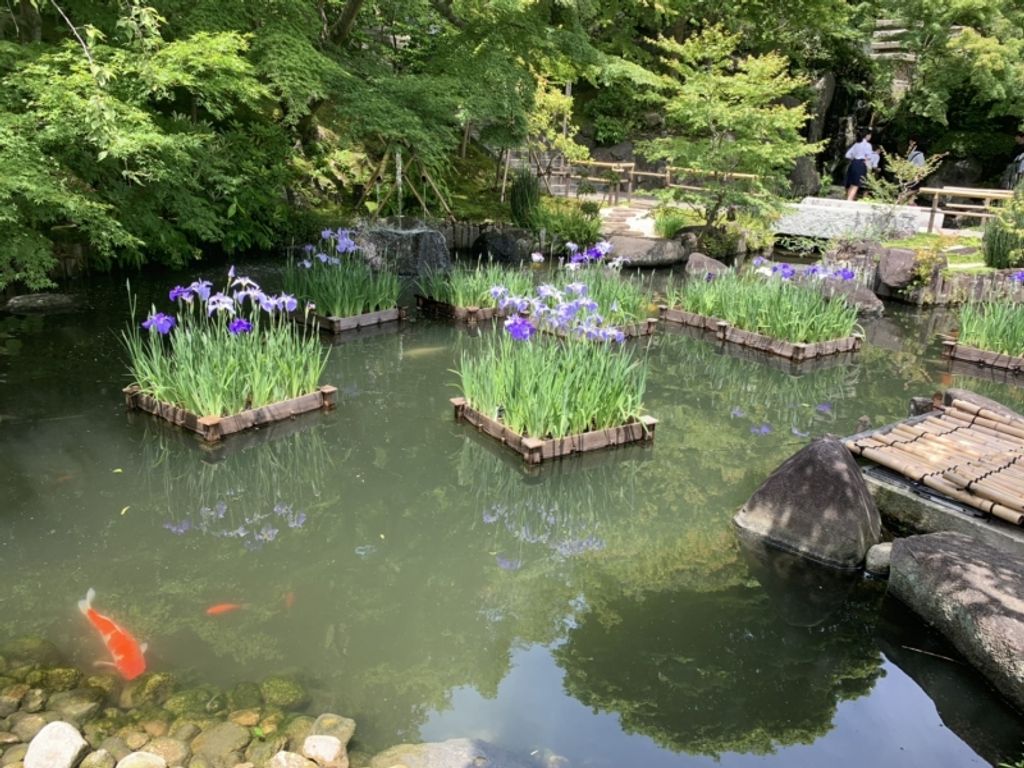 This temple is also known as “flower temple”. You can enjoy beautiful flower viewing according to seasons. Above are hydrangea and iris. 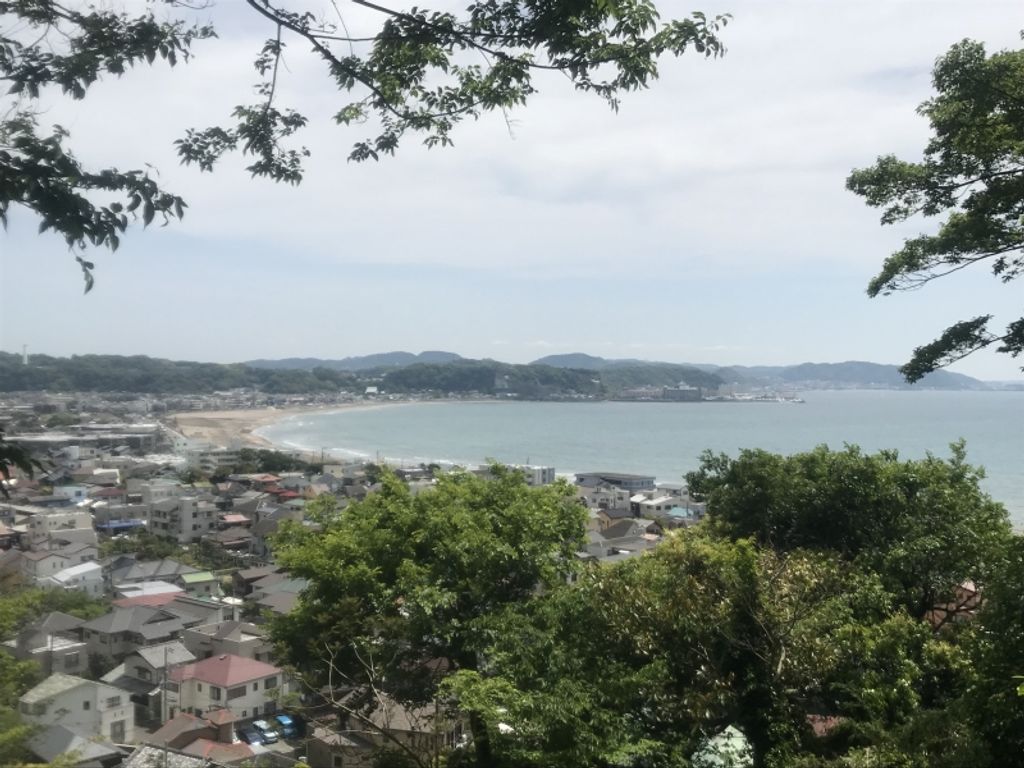 You can also enjoy beautiful ocean view from a lookout. I like this scenery very much because it’s so beautiful! 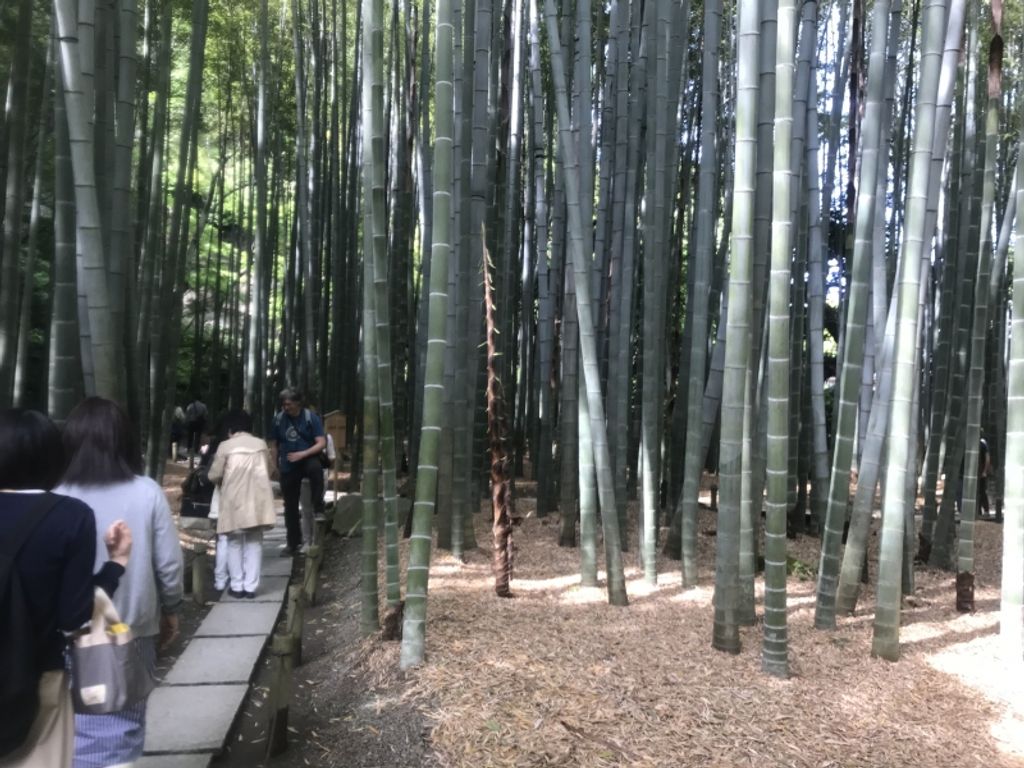 This temple was founded in 1334, and is truly Zen temple which has a beautiful and relaxing bamboo forest. It is also called “bamboo temple”. Staying inside the bamboo forest will make your heart very peaceful. Saint Nichiren, a founder of Nichiren sect of Buddhism, came to Kamakura for his missionary work in the middle of the 13th century, and built a small house at this place. But it was burned down by monks and samurai in Kamakura. After that he built a small temple. It is said this small temple is the origin of Myohoji Temple. Because there are beautiful moss stone steps in the precincts, it is said to be a “moss temple”. It’s so beautiful! Sugimotodera Temple is a temple of Tendai sect of Buddhism. It is the oldest temple in Kamakura, and was built in 734 by Saint Gyoki nearly 500 years before the Kamakura Shogunate opened. On the night of November 23, 1189, a fire broke out, but the three main images avoided the fire under the big cedar tree, so they were called “sugi-moto-kannon” meaning “kannon under the cedar tree”.

They have beautiful moss stone steps with white flags at the entrance of the temple.

Hakone is located about 90km southwest of Tokyo and one of the most famous hot spring resorts in Japan. In addition scenic sightseeing spots such as L...

Kamakura played one of the most important roles in Japanese politics during the Kamakura period, about 800 years ago. The Kamakura shogunate was estab...

Enjoy old and new Tokyo through this tour! Meiji Shrine is one of the biggest and most famous shrines in Tokyo. Along Omotesando Street in Harajuku many luxury brand shops are located, and Takeshita-dori Street near Omotesando Street is known as a shopping place for young people. Imperial Palace East Gardens are a big beautiful park near Tokyo Station. In Ueno they have a lot of temples and shrines, and also museums such as Tokyo National Museum, National Museum of Nature and Science, etc.

Feel the atmosphere of Hakone volcano, and enjoy the beautiful view of Mt. Fuji and Lake Ashi! Owakudani and Lake Ashi were made by the volcanic activity of Mt. Hakone about 3,000 years ago. At Osakudani you can see the sulfur vapor blowing up and beautiful Mt. Fuji on sunny days. From a boat on Lake Ashi you can enjoy beautiful scenery every season. Hakone sekisho (checkpoint) is a facility to investigate travellers which was built about 400 years ago. You can learn more about it in Hakone.

Enjoy the historical city Kamakura and feel the old Japanese atmosphere of Buddhist temples and Shinto shrine! At Hokokuji Temple you can enjoy matcha tea while viewing a beautiful bamboo forest. Then we will visit a Tsurugaoka-Hachimangu Shrine which is a shrine for samurai warriors and enjoy shopping at Komachi-dori shopping street near this shrine. After lunch we will visit Great Buddha and Hasedera Temple using Enoden local train.

Enjoy shopping and spectacular view, and feel the atmosphere of Buddhism and Shinto! We will visit Tsukiji outer market and enjoy shopping and delicious sushi lunch. We also visit Namiyoke Shrine and Tsukiji Honganji Temple, which are the heart of Tsukiji people. From Hinode pier near Tsukiji we will take a boat to Asakusa. You can enjoy the view of Tokyo from a river. In Asakusa we will visit Kaminarimon Gate, Nakamise Shopping Street, Sensoji Temple, Asakusa Shrine, and Tokyo Skytree.

Feel the atmosphere of Tokugawa Shogunate at the world heritage site! Rinnoji was established by Saint Shodo in the 8th century, and the beautiful Taiyuin mausoleum is located in the precincts of Rinnoji. Toshogu was built in the 17th century to worship Tokugawa Ieyasu. You can see the beautiful carvings of Yomeimon Gate, three wise monkeys, etc. Futarasan Shrine is famous for the benefit of good marriage and inviting good luck. The beautiful Shinkyo Bridge is a property of Futarasan Shrine.

Plan your trip to Kamakura with Hiroshi S.