◆The town of Sawara, located some 45minutes by train from JR Narita Airport Terminal 1 Sta. or some 90minutes by highway bus from Tokyo Sta. Yaesu Exit, exposes all visitors to the traditional Japanese culture and lifestyle dates the Edo Period(1603～1868). 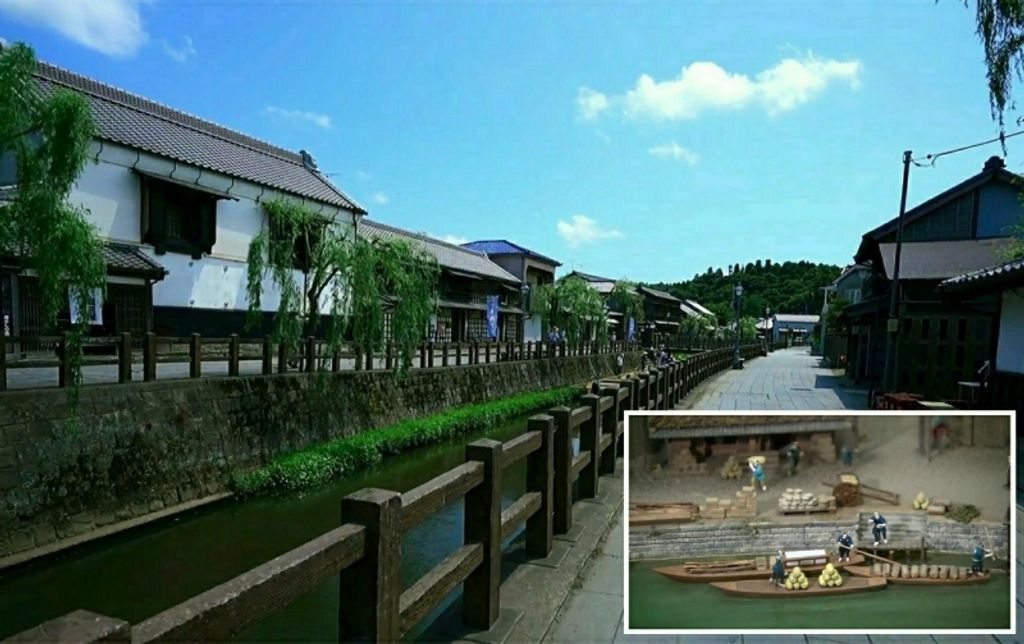 Traditional townscape lies along the Onogawa River once functioned as an inland transportation waterway leading to the great river of Tone and continuing to the megacity of Edo(present Tokyo). 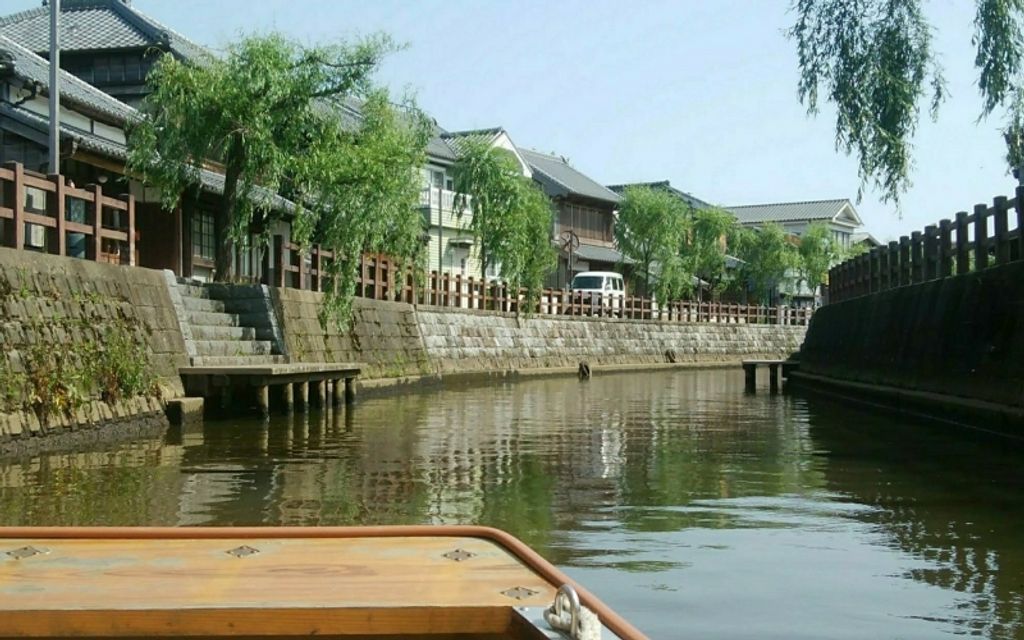 The views seen from a boat reminds you Sawara was a Merchant Town of water transport. 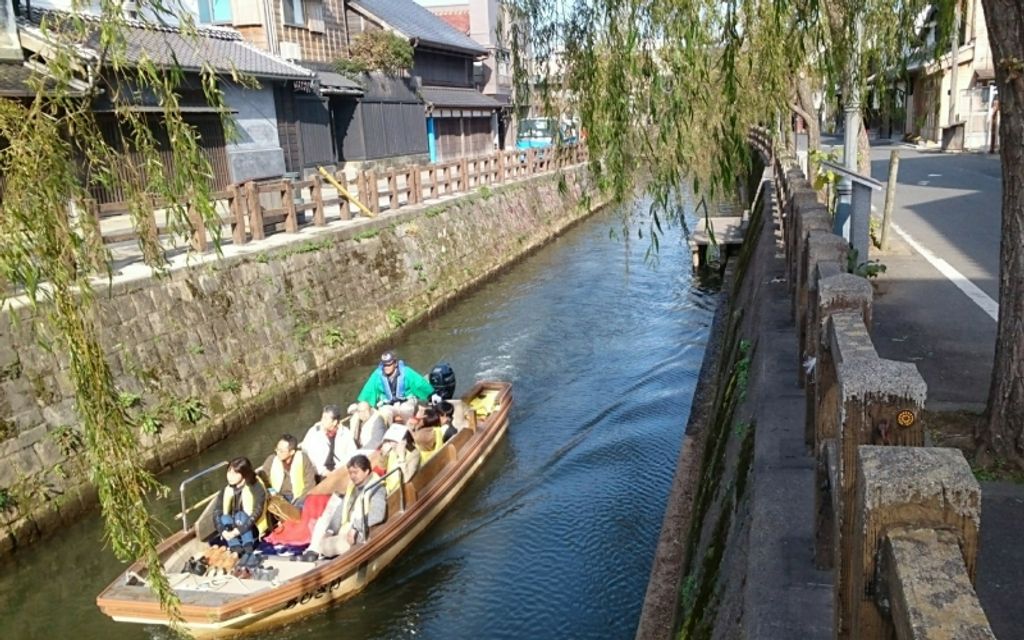 Boating on the Onogawa River. 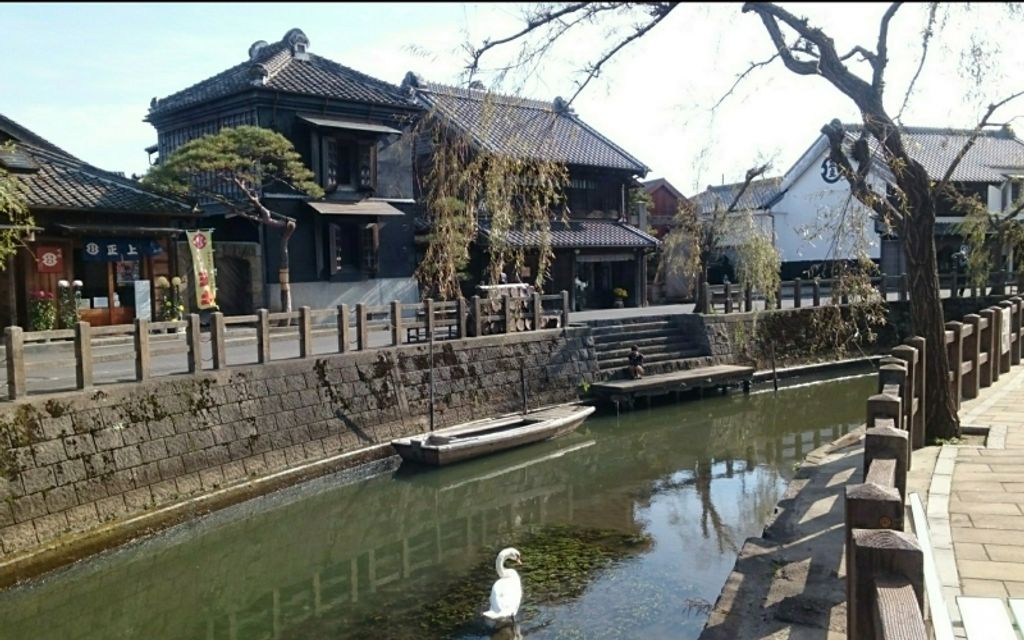 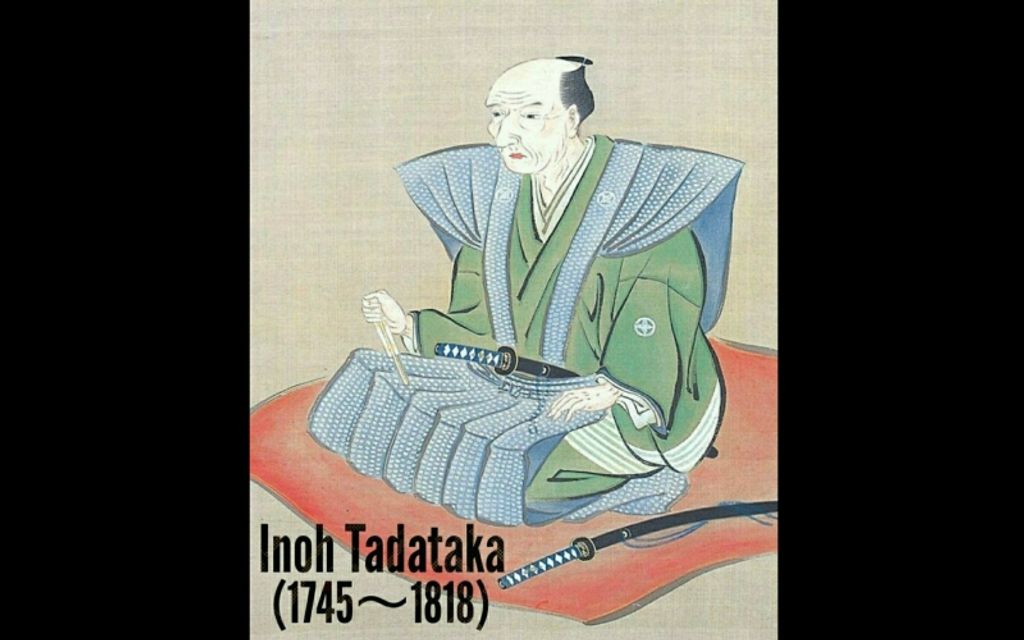 Inoh Tadataka successed to calculate the accurate distance of one degree of meridian line with the aim of obtaining the earth size through surveying activity of all the coastal line of Japan for drawing the first-ever detailed map of Japan. 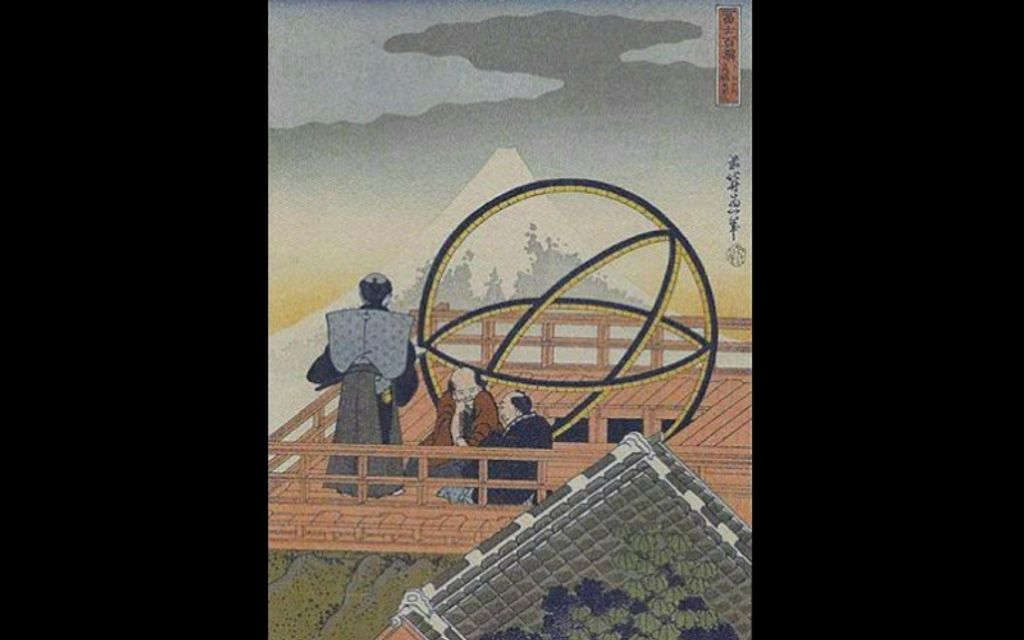 Tadataka studied astronomy and surveying at the Asakusa Astronomical Observatory. “100 views of Mt. Fiji：Armillary Sphere at Official Business Residence” created by Katsushika Hokusai after ages shows a scene of astronomical observation there. 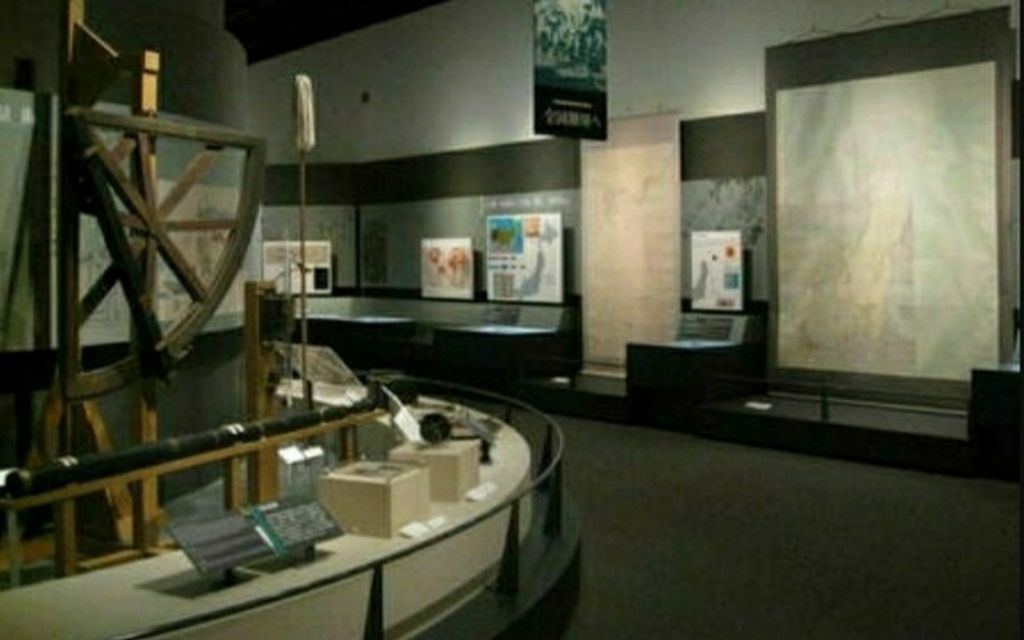 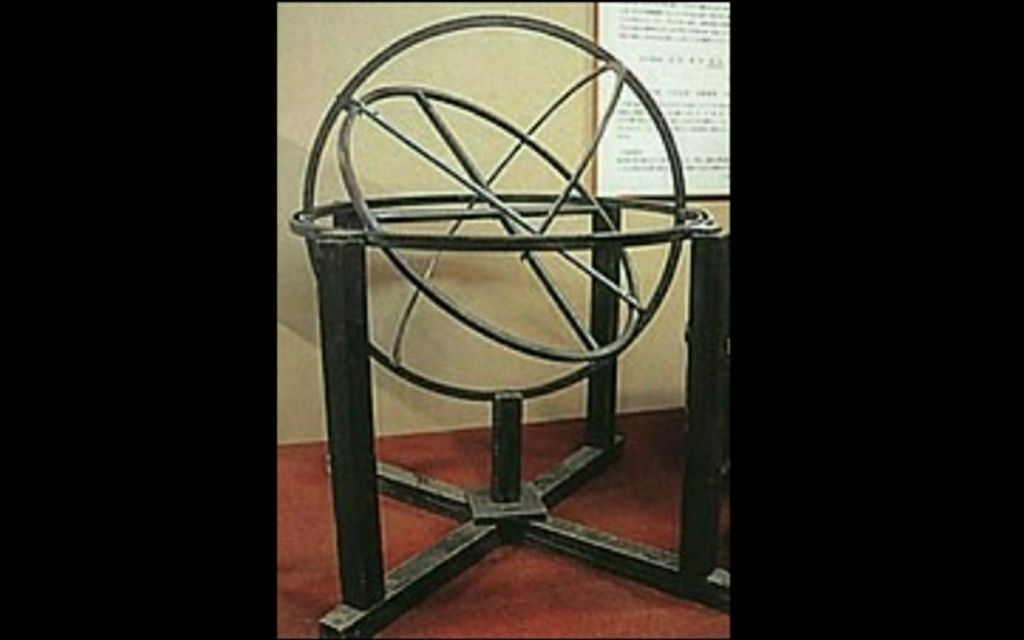 A sample of Armillary Sphere 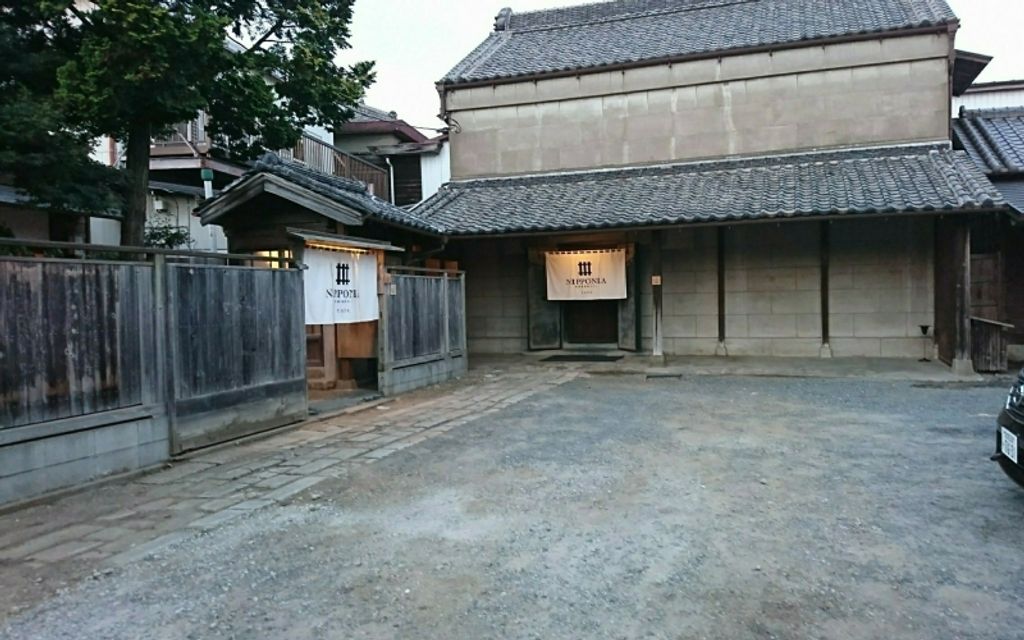 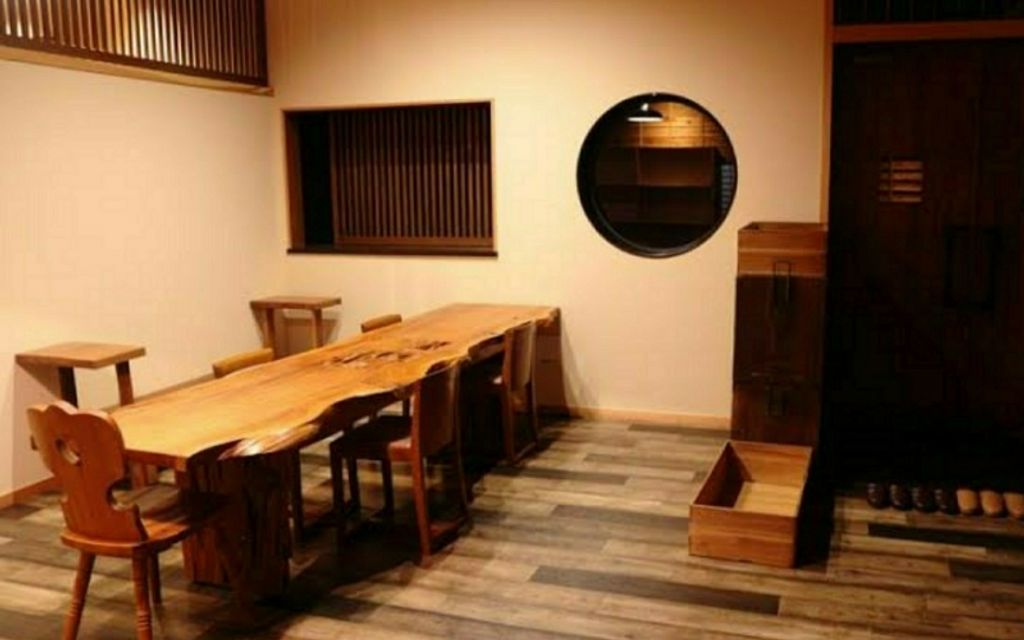 ◆About Sawara
SAWARA’s locational advantage makes easier for many tourists including people of the layover in the Narita Airport to use the available time effectively.
Besides its locational advantage,it exposes all visitors to the traditional Japanese culture and lifestyle dates the Edo Period(1603～1868). Because, it’s a Merchant’s Town flourished as a center for the trade activity benefiting from the Tonegawa River transport to support Edo(present Tokyo), a big city with a population of over one million, by being a riparian port to accumulate and send a broad range of things necessary of daily life for Edo.
The Onogawa River that flows through the town of Sawara, leading to the Tone River and continuing to the megacity of Edo was an important water transportation route during the Edo period.
It’s also called the “Eastern Nada” comparable to the famed “Sake” brewing area of Nada(present Kobe).
Even now, many traditional buildings, such as machiya townhouses and storehouses in kurazukuri-style that line both banks, remain elegant.
“If you want to see Edo,come to Sawara; Sawara Honmachi(central Sawara) exceeds Edo”was a limerick of the Edo Period which best describes the prosperity of Sawara in those days.
Specifically,it’s also home to administrative operations conducted by upper-class merchants called “danna-shu” (“the masters”),many artisans in Edo were summoned to Sawara.
The fusion of Edo artisans’ craftsmanship and stylish spirits of “danna-shu” allowed Sawara to develop the distinctive culture based on the spirits of exceeding Edo called “Edo-masari”!!
Incidentally,Inoh Tadataka(1745～1818) who surveyed all over Japan and made the very first surveyed maps of Japan’s coastal area , was one of them.
After being active as a leader of “danna-shu” community, he retired at the age of 50 and left for Edo later to study Western astronomy and surveying techniques under the famous astronomer Takahashi Yoshitoki, who was officer in charge of astronomy bureau in Edo feudal government, there.
Mastering astronomy in a amazingly short time of 5 years, he set out on his journey to Ezo(present Hokkaido) with
some followers to calculate the accurate distance of one degree of meridian line with the aim of obtaining the earth’s size through surveying activity under the supervision of Yoshitoki. He spent some 17 years traveling 40,000km to survey all the coastal line of Japan. His maps,many of which are accurate to 1/1,000 of a degree, remained the definitive maps of Japan for nearly a century. This episode suggests that Sawara was a Merchant’s Town with a sophisticated culture,and even now this distinctive culture based on the spirits of exceeding Edo called “Edo-masari” is still alive along with the traditional townscape here in Sawara!!
Incidentally, the central part of Sawara was designated as Important Preservation District for Groups of Traditional Buildings by Japanese government in 1996!!

Plan your trip to Narita with Hiroki K.