3 Great Ideas for your Yamagata Trip

Yamagata, known for hot springs, mountains, and temples, is a great place to spend a few days during your stay in Japan. Yama-dera, a mysterious group of temples built on the rock face of a mountain is the must-see attraction in Yamagata. So, if you are planning a trip here, Yama-dera is the must see sight: 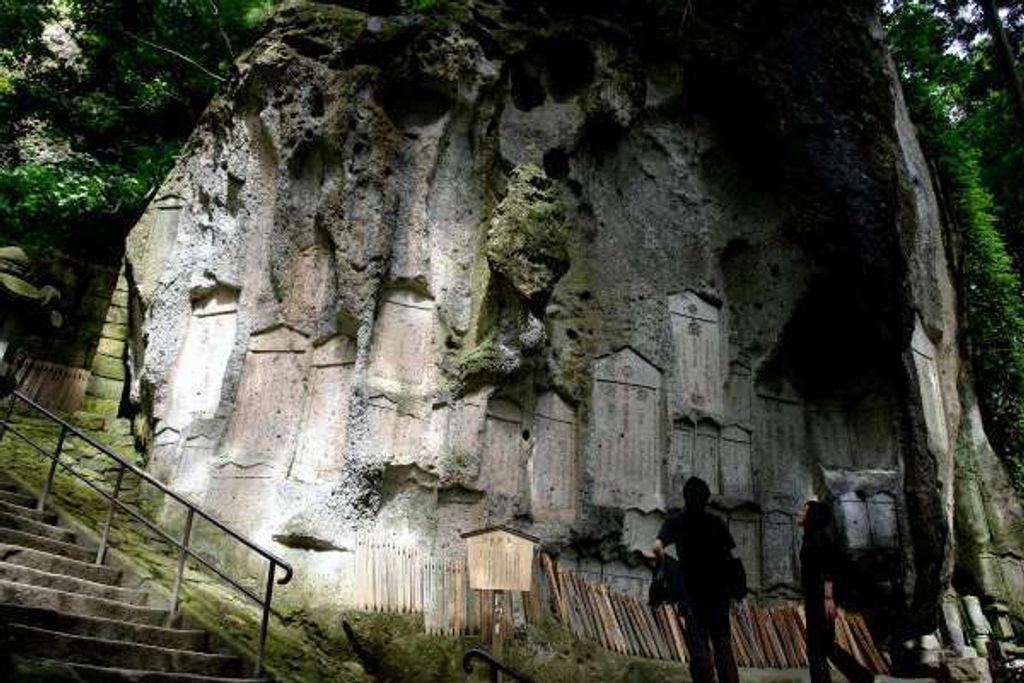 The official name of the temple is Risshaku-ji Temple on Mt. Hoju but because of the image of the temple becoming part of the mountain, it has been affectionately called Yama-dera (mountain temple). In the year 860, the priest Jikaku Daishi established the temple as a part of the Tendai sect for the Imperial family in which there are 5 nationally-designated Important Cultural Properties including the main temple building, and nationally-designated Places of Scenic Beauty and Historic Sites. The group of historic sites located there that enhances the natural scenery that is a feature of Yama-dera is filled with an atmosphere that evokes the feeling of a holy place. Due to that mystique, it is part of a pilgrimage course known as the Shiji Kairo which includes Yama-dera, and three other ancient temples of the Tohoku region, Hiraizumi Chuson-ji, Motsu-ji and Matsushima Zuigan-ji.

To visit the group of temple buildings that makes up Yama-dera on the rock face, you must go up 800 stone steps as part of a climbing trail. In winter, since the snow makes climbing somewhat treacherous, wearing the appropriate footwear is important. It’s not easy to climb but any fatigue you feel will melt away once you see the beautiful scenery created from nature and the old buildings such as the temple and the historic sites right at the top of the steps. From the Godaido Hall where the Five Great Wisdom Kings are enshrined and where great peace is prayed for, a grand and scenic beauty can be seen below which will impress you.

With Japanese haiku increasing in popularity in the world, Yama-dera is famous as the place where modern haiku poet Basho Matsuo wrote his poetry. His famous poem, “The Narrow Road to the Deep North” which he had written while he was traveling all over the Tohoku region, was the masterpiece that he left at Yama-dera. With his “Semizuka” which is engraved onto a stone slab, you can fully enjoy Matsuo’s world view. Also, there is the Yama-dera Basho Museum which is an 8-minute walk from JR Yama-dera Station with its exhibits of the works of the poet. 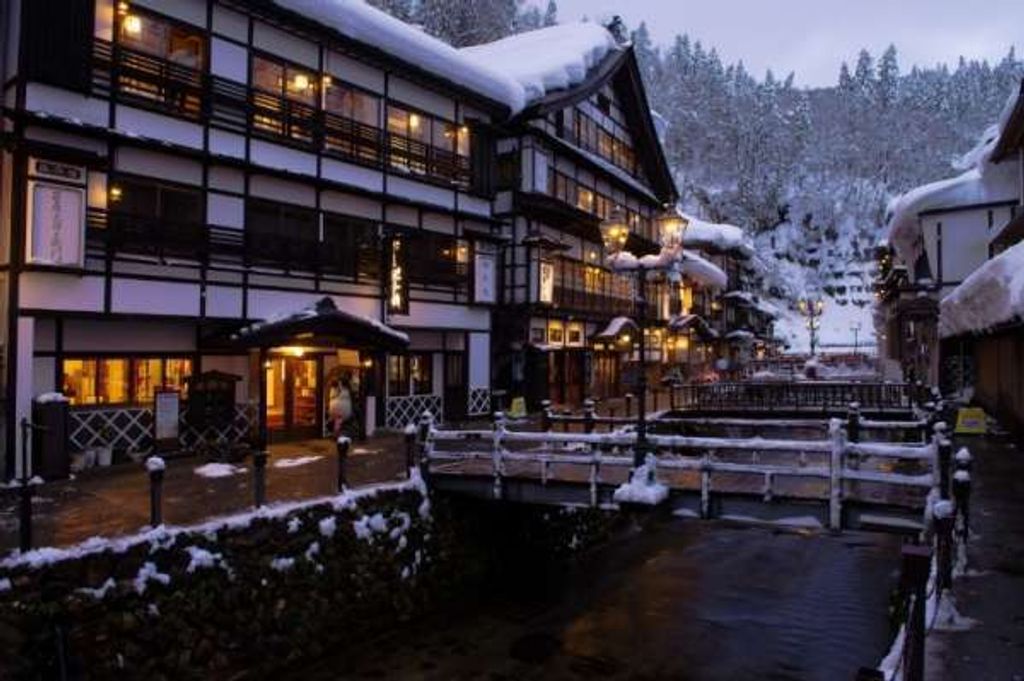 The onsen resort boasts beautiful scenery in a mountain village rich with nature. In winter, the area is covered in deep snow and in the summer, it’s filled with lush green trees. Within Ginzan Onsen located in the middle of the mountains, there are up to 12 onsen ryokan along the river. When the sun sets, gas lamps provide a soft light and the beauty of the onsen resort is further enhanced. The old history of Ginzan Onsen can be traced back to the Edo Era in the 17th century. The area once flourished due to silver mining, and the hot springs discovered in the river through the mining there was responsible not only for the resort but also for its name. The buildings with their balconies erected in the early part of the 20th century which were called modern at the time have taken on a nostalgic façade over the passage of time, and so the onsen resort of this mountain hamlet has continued to attract visitors for its feeling of a past age.

There are 12 onsen ryokan (inns) within the town. Staying at the ryokan with their Japanese hospitality, enjoying the cuisine and spending a relaxing time in the hot springs make for a royal experience. Taking a stroll in the town while wearing the yukata that can be rented from the ryokan is an experience that can only be found in the onsen town. Along with shops and restaurants, there are public baths that can be used for a fee and a foot bath that is free of charge, so how about trying them out? Most of the ryokan also provide hot springs for people who are just on a day trip, so you can enjoy the onsen without needing to stay over.

The spacious nature that is near the onsen town is also beautiful. There is a nearby walking course available where you can enjoy the natural surroundings of the mountains at Ginzan Onsen. You will be able to observe features of lush nature such as the murmurings of the river and the silvery-white waterfalls. Just ahead, there are remains of the silver mine which can be toured. However, since walking is treacherous during winter, it must be mentioned that entry into the mountain toward the mine is impossible. 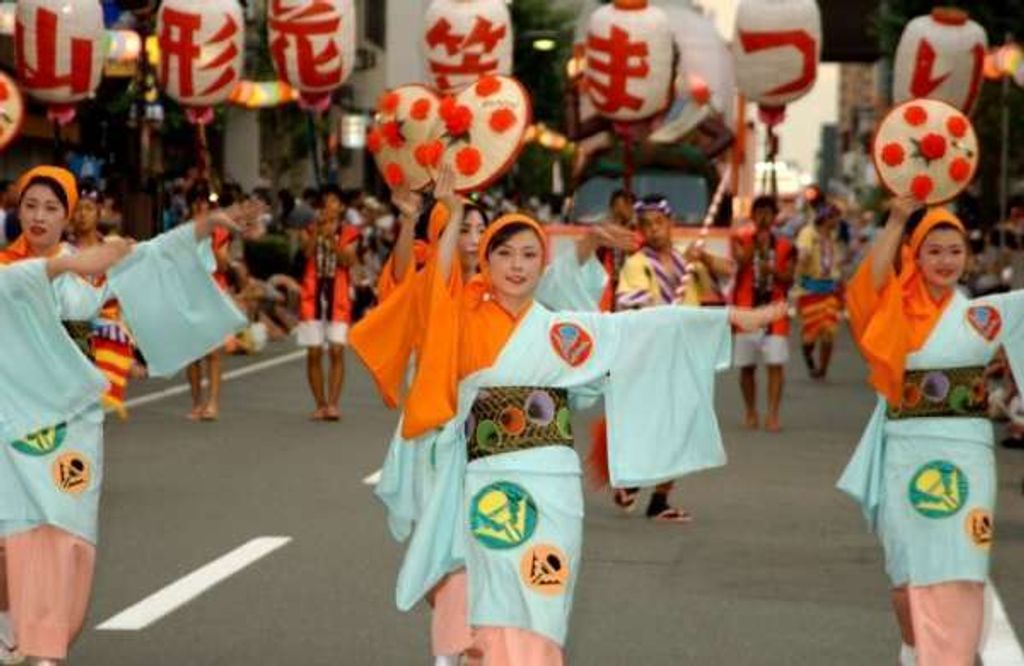 Annually from August 5th to 7th, the 3 days of the Hanagasa Festival are famous as a large-scale celebration representing the Tohoku area throughout the nation. With the high-spirited cries of “Yassho, makasho!!”, wadaiko drums grandly echo in time with the song of “Hanagasa Ondo”. The major streets of the city that make up the venue for the festival overflow with the passion of groups of dancers performing in perfect order. In front of the beautifully adorned floats, a parade is held comprised of dancers sporting hanagasa that resemble hats decorated with safflower, the prefectural flower for Yamagata. Dancing while lightly twirling the hanagasa makes for a graceful sight. That particular dance expresses the fresh wind that crosses over the Mogami River flowing through Yamagata Prefecture and the waving of the ears of rice in the paddies. Also, the song accompanying the dance, the Hanagasa Ondo, is said to have originated from a ballad sung by workers toiling outside to work in rhythm. The memories behind the history of Yamagata and the beautiful natural landscape are imbued into the dancing to create a huge summer festival with the entire citizenry as one.

Just seeing everyone from kids to grown-ups getting into various groups and taking part in the dance parades is fun enough, but there is also the Tobiiri Corner for folks who want to enjoy participating in the dance themselves. At the Corner set up near the parade goal (in front of the city hall), you can enjoy dancing in a circle without joining in the parade. Also, if you find the placard for “Tobiiri Corner” at the tail-end of the parade, that is your chance to jump into the parade itself. In either case, a teacher will provide training so even beginners can take part without any worry. It is a great opportunity to experience the culture and entertainment of the land through a festival.

Plan your trip to Yamagata