Planning a trip to the island of Shikoku? Tokushima is a must-see place with stunning scenery and incredible attractions. Whirlpools, gorges, and a huge valley make up its surroundings, making it a perfect place to enjoy breathtaking nature. Here are the top four attractions in Tokushima: 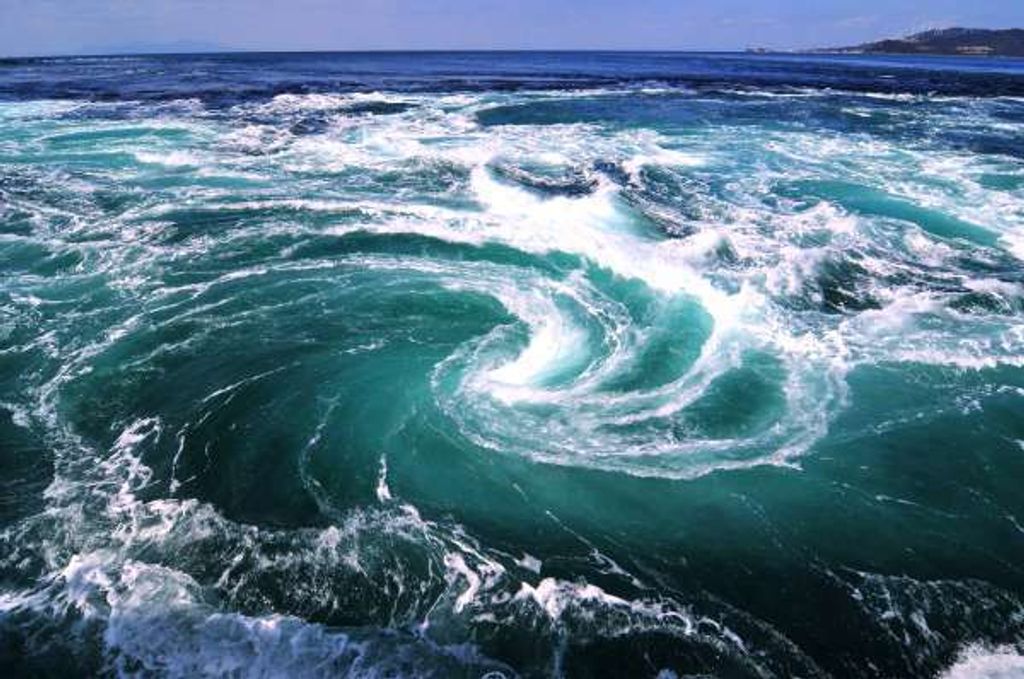 The Naruto Strait that runs between Shikoku and Awaji Island is home to one of the world’s three major tides, alongside the Strait of Messina between the Italian peninsula and the island of Sicily, and the Seymour Narrows between the North American West Coast and Vancouver Island. Topographically speaking, there are tidal currents coming into the Naruto Strait from the Kii Channel and the Harima Nada part of the Inland Sea, but with the times of high tide from those two areas being different, the change in water level can be as high as 1.5m, so with the water rushing from a higher position to a lower position, the center of the water flows faster while the water on either side of the center flows more slowly with the change in speed causing the whirlpools. Furthermore, directly below the Onaruto Bridge, there is a V-shaped underwater ridge which falls to a depth of 90m, and with the Naruto Strait having a distinct concave topography as the southern edge of the strait falls to 140m while the northern edge is 200m deep, the flow of the seawater further contributes to the whirlpools. In a day, high and low tides occur twice each every 6 hours which is when the whirlpools appear. Also, twice a month, with the arrival of spring tides at the times of the full moon and new moon, the water flow becomes faster, and especially from the end of March to the end of April, the spring tides produce whirlpools of up to 20m in diameter. Please refer to the homepage in advance for the peak times to observe the whirlpools.

To appreciate the whirlpools, you can view them from the Tokushima Uzu-no-Michi bridge observatory 45 meters above which has a glass floor directly above the whirlpools or the sightseeing boats which actually approach them. The Wonder Naruto is one such large boat which can hold up to 400 passengers and allows them to view the whirlpools over a leisurely 30 minutes. The Aqua Eddy is a smaller fast vessel with an observation cabin that goes 1 meter underwater from where you can see the appearance of the whirlpools in the ocean itself for a different thrill. Advance reservations are required for the Aqua Eddy. You will want to experience the exciting roaring currents as you approach the whirlpools. 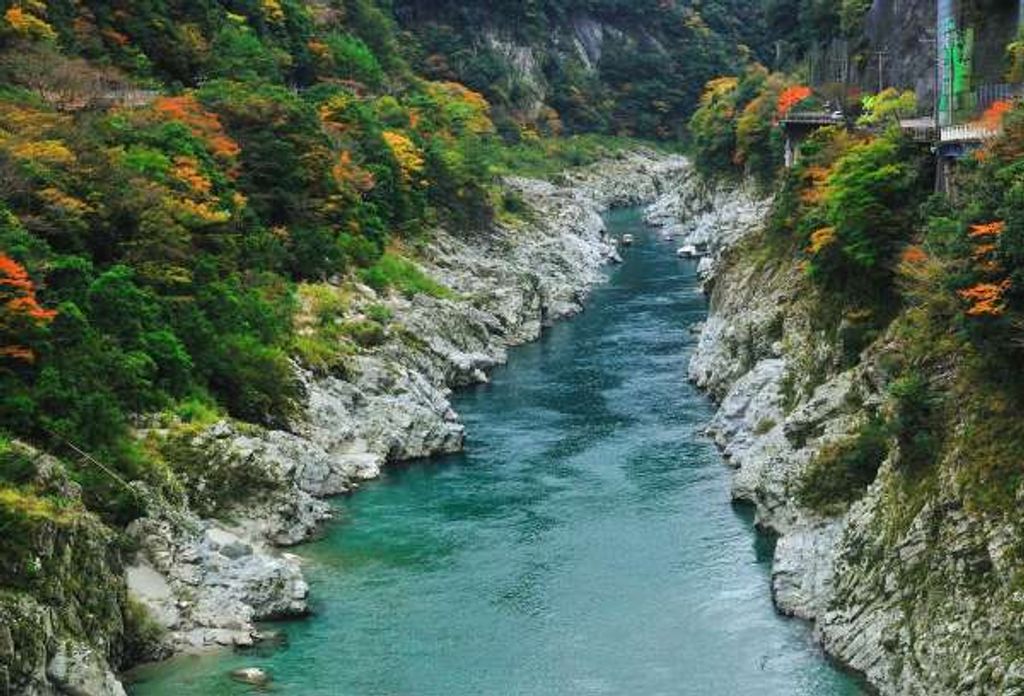 (image by image by awanavi.jp)

The 8km long Oboke Gorge was created from a 200-million-year process of erosion of the sandstone by the swift currents of the Yoshino River. Along with the nearby unexplored Iya Valley, the area is a popular tourist spot. The gorge has such beautiful scenery that you wonder if that is indeed marble which is soaring overhead, and it has been nationally designated as part of a Natural Monument as a precious site of the country where you can understand the origins of the Japanese archipelago. The Oboke Gorge Excursion Cruise is the most popular tour where you can appreciate the beautiful cherry blossoms in the spring and the colors of the fall while going down the clear waters. The tour is open every day and you can participate in the cruise on that day for an up-close leisurely downstream trip of the dynamic beauty of the gorge which lasts 30 minutes (4km) for a round trip. Also, from the remote Tsubojiri Station along the JR line that passes between Kagawa Prefecture’s Kotohira and the Oboke Gorge, you can board the Mystery Trolley on the Dosan Line with its superb view on a 90-minute trip heading for Oboke. This train which proceeds slowly over many iron bridges and from where you can get marvelous views from along the Yoshino River provides a deeply atmospheric trip.  Operation is limited in that there is only 1 train per day going up and down the line so checking the schedule in advance is necessary.

As well, rafting is recommended for those seeking a bit of action. Oboke is famous for being one of Japan’s major areas for rapids, and rafting and kayaking are dominant activities here. There are huge waves exceeding 3 meters and 2-meter drops amid all of the perfect scenery, providing full thrills. 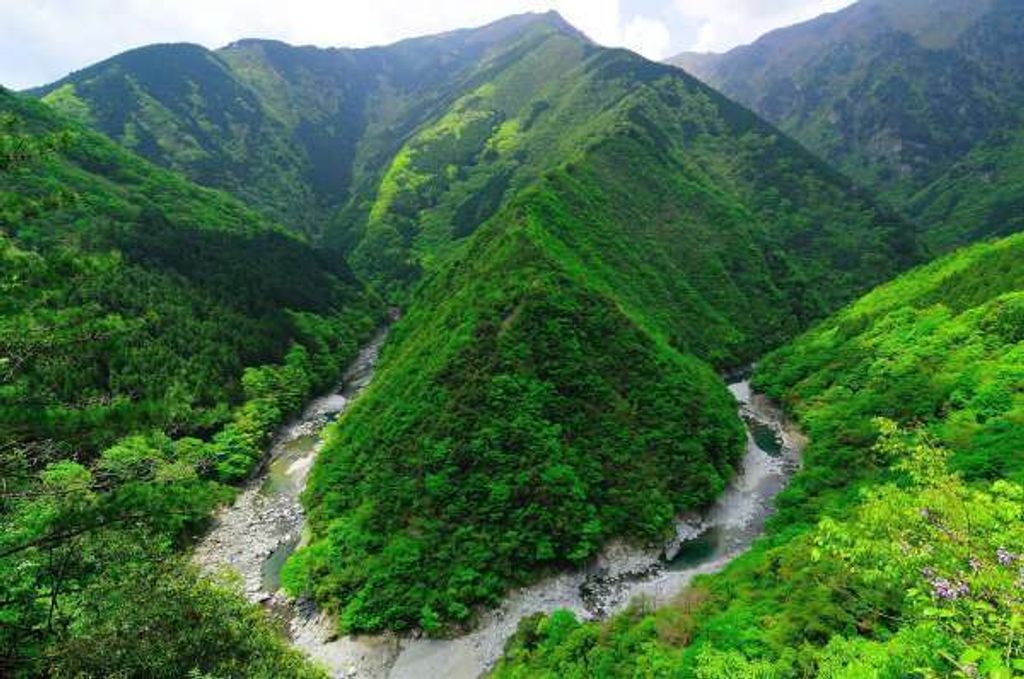 The V-shaped valley continues on for its total length of 10km along the Iya River, a tributary of the Yoshino River located in Miyoshi City, Tokushima Prefecture. There are lush forests due to the high level of precipitation in the area, and since the valley has cliffs which soar for several hundred meters, it has become popular as one of Japan’s Three Secluded Regions which retains a largely unspoiled landscape. Access to the area is not easy so rental car is convenient. There are few train runs, but you can take bus or taxi from JR Awaikeda Station as a starting point.

A tourist spot in the Iya Valley that cannot be missed is the Manneqin Pis statue standing on one of the cliffs overlooking the Iya River. The statue of a boy peeing was created based on a story of the local children taking a test of courage, and it stands on a cliff 200 meters over the valley. The Iya-no-Kazura Bridge is a 15m-long and 40m-high suspension bridge woven from bower vines which can have diameters up to 15cm which is thrilling to say the least. It’s said that the bridge was built to be easily cut down by members of the Taira clan who were escaping into the Iya region when they lost battles in the past. At present, the bridge undergoes rebuilding work once every 3 years for safety. The Iya Onsen, a secluded hot spring which can also be used for day trips, is reached by cable car going down 170 meters to the bottom of the valley where you can get a large panoramic view of the valley as you head for the open-air bath with the water flowing from the source spring. At the popular gender-separated open-air bath which is built so that it juts out into the Iya River, you can spend a luxurious time while admiring the lovely view and listening to the sounds of Mother Nature. Of course, overnight stays are possible. 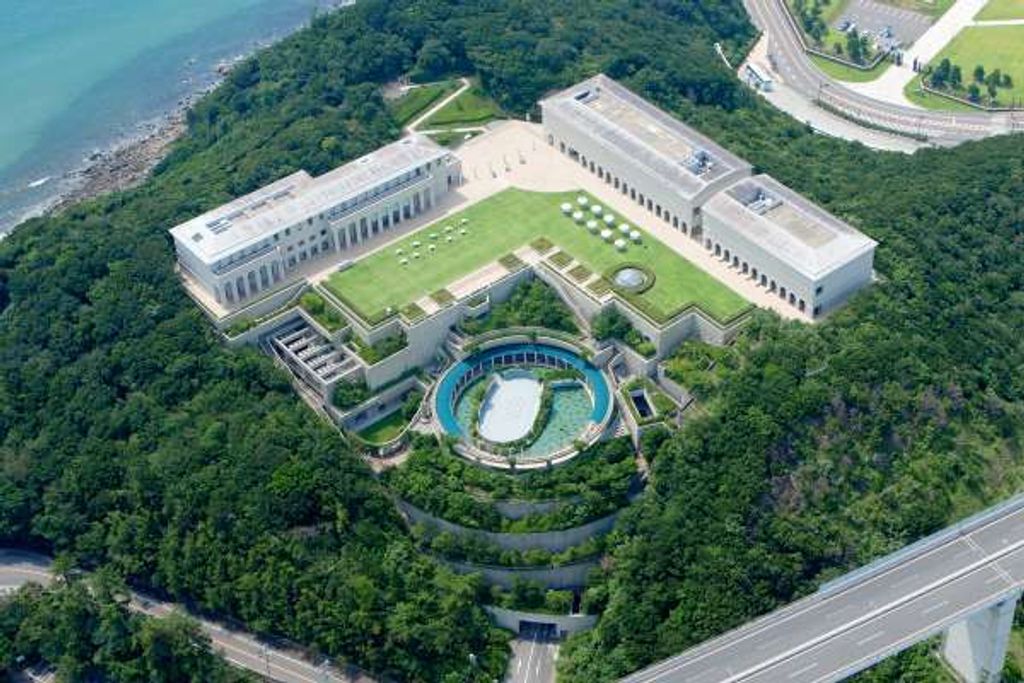 The Otsuka Museum of Art is a place where all of the exhibits are replicas of world masterpieces that have been perfectly reproduced. Starting with the perfect reproduction of the ceiling fresco of the Sistine Chapel painted by Michelangelo, there is also Monet’s “Water Lilies” from Musee de l'Orangerie in France, El Greco’s restoration of a large altar screen, “Mona Lisa” from The Louvre, along with exhibits from Leonardo Da Vinci, Goya, Renoir, Picasso, Dali and other masters from eras such as the Middle Ages, the Renaissance, the Baroque Era, Early Modern and Contemporary all arranged in a comprehensible order in terms of art history. The recreations of famous art works on display number up to 1000 representing 25 countries. They range from 3 floors underground to 2 floors above ground covering a distance of 4km where you can get guided tours by volunteers of the wide facility under different themes and even listen to commentaries on about 100 artworks via audio guides in English, Chinese and Korean.

This is an art museum of replicas which is unprecedented in the world in which all of the masterpieces have been reproduced onto ceramic panels via special techniques. The dimensions and colorings have been recreated and when compared to paper and canvas, the colors have not deteriorated so the works can be preserved for all time which has contributed to the preservation of the cultural records. Even the size has been faithfully recreated so you can feel the power and presence of the real thing. This is the world’s only art museum where you can interact with the world’s art museums while in Japan. It’s also great in that since all of the works are replicas, you can take photographs of everything. There is also a restaurant, a café and a museum shop so you will want to take a full day to appreciate everything.

Plan your trip to Kagawa