I recently visited Osakajyo castle long interval of time since I did last time more than 5 years ago.  It seems that my impressive feeling to see the castle and enormous surrounding area has become largely changed with bigger impression than my previous one. 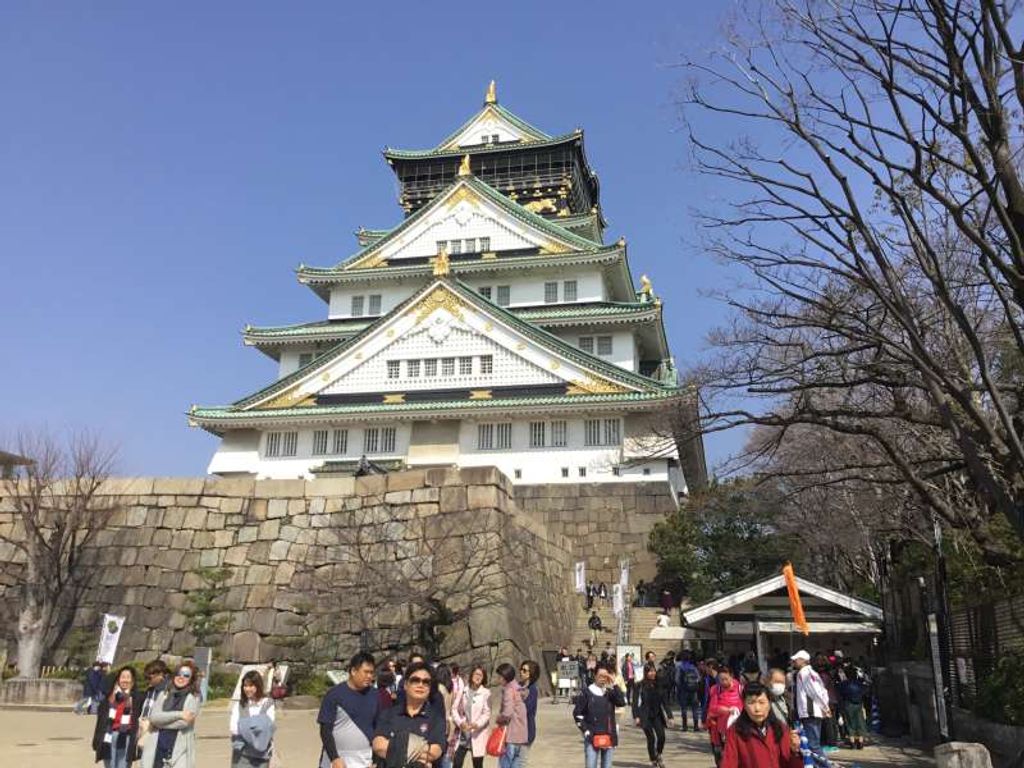 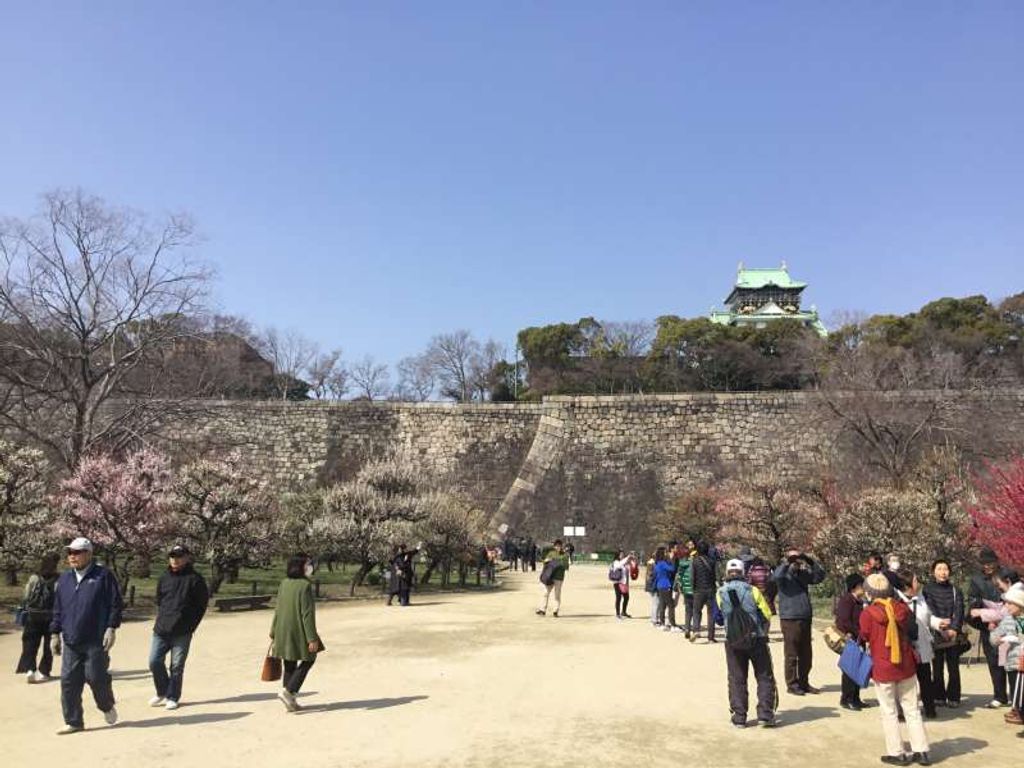 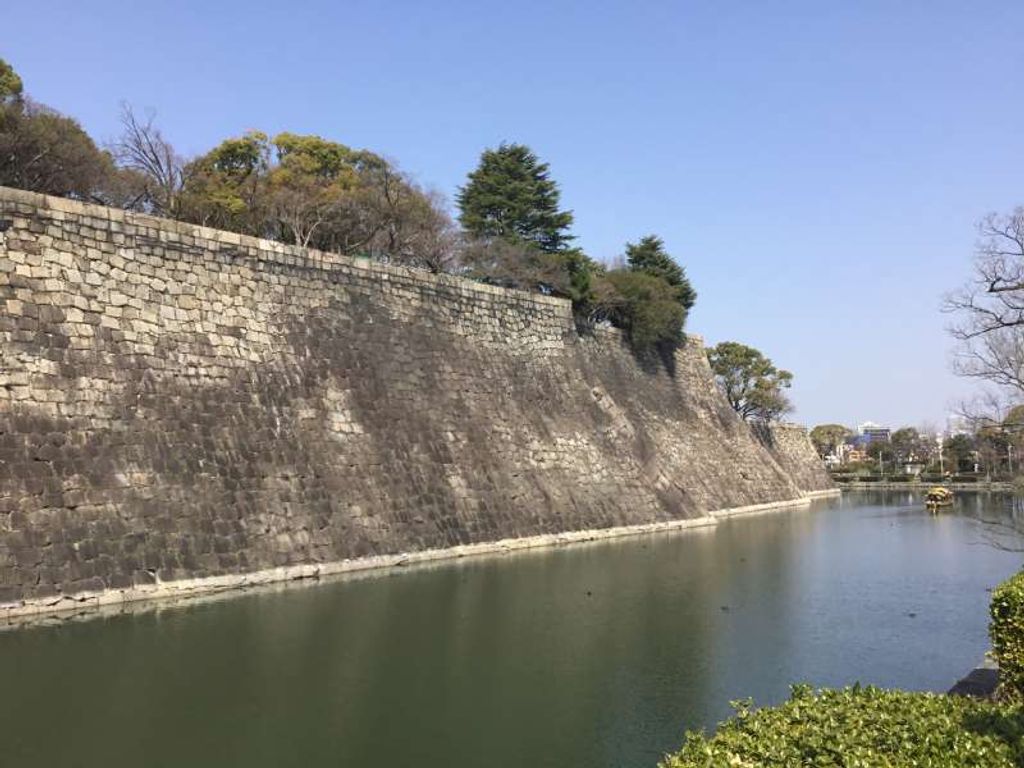 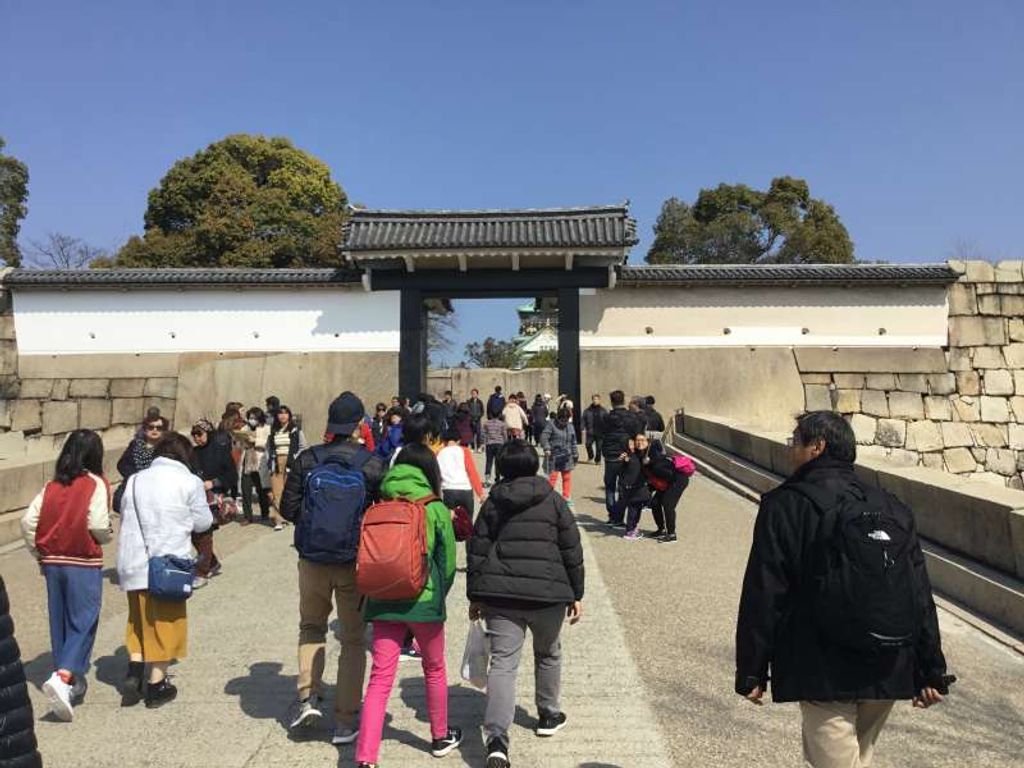 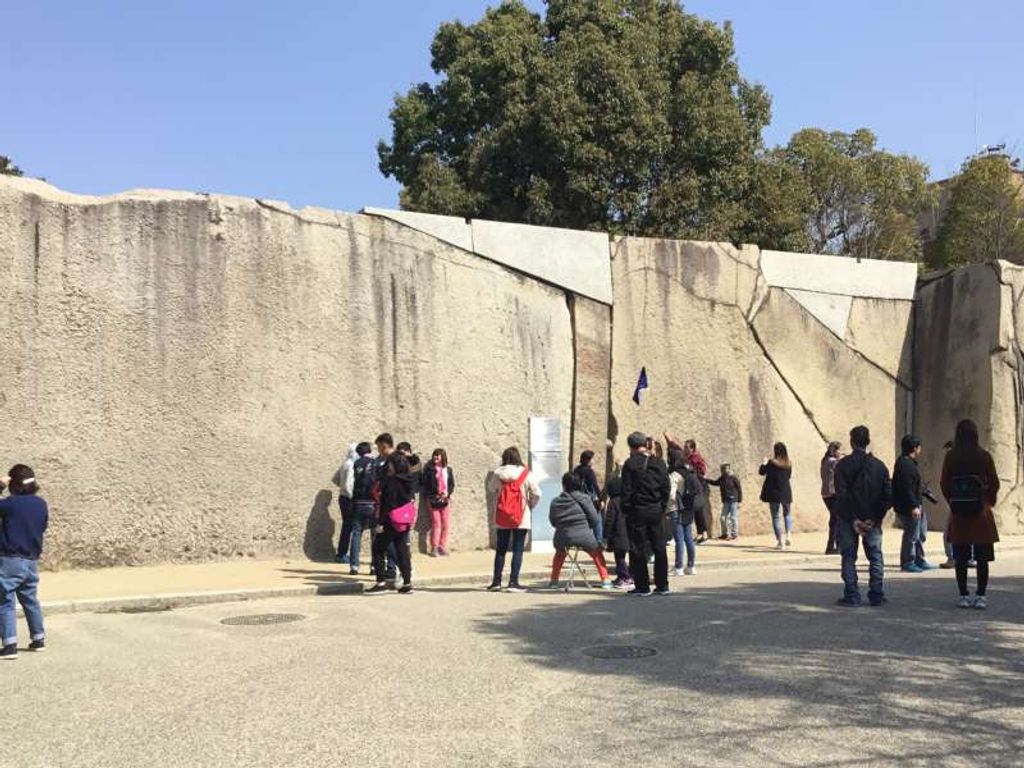 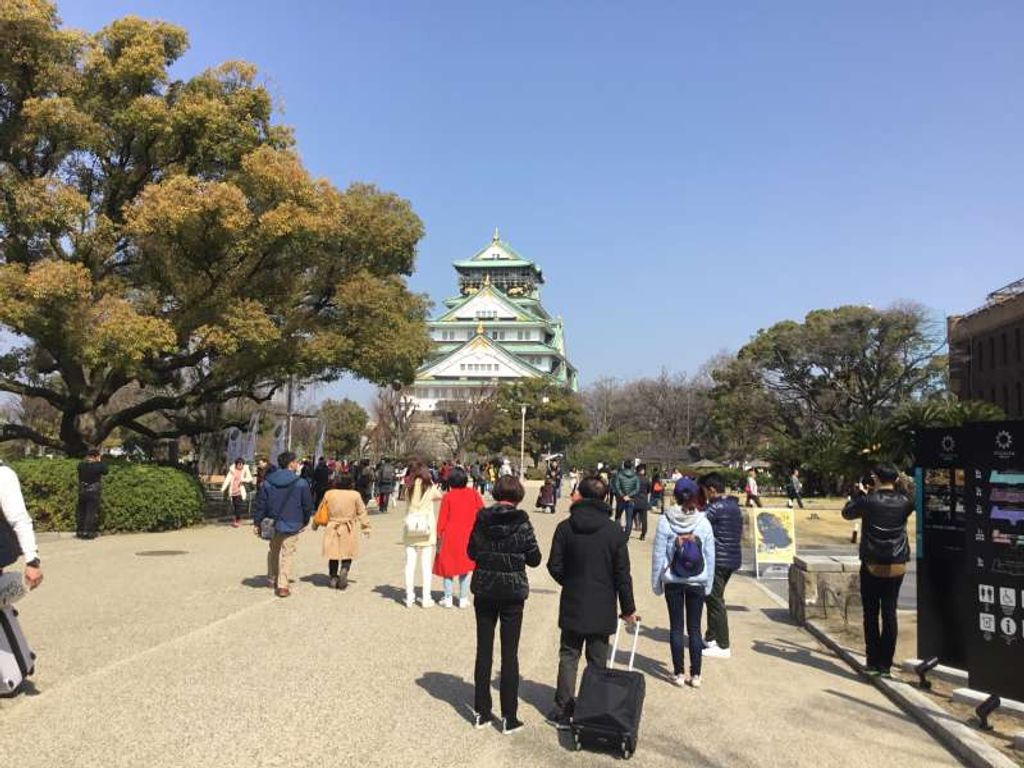 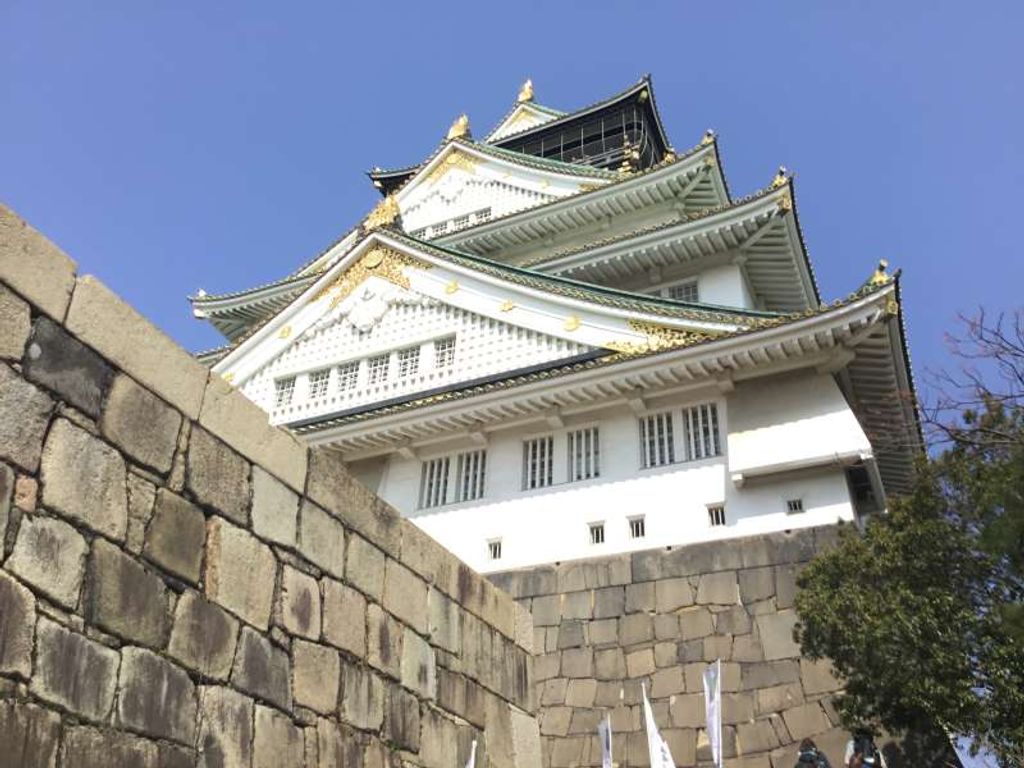 After I have started to do my task of tour guide for foreigners coming to Japan, l have studied more deeply about Japanese history and several historical great worriers ,specially three top worries who had founded the base of unifying Japan from 16th to 19th century.
The name is Nobunaga Oda, Hideyoshi Toyotomi and Ieyasu Tokugawa.
I summarize the historical table with brief explanation during the era when Samurai worriers had started to hold ruling power from 11th century to 19th century as below.

To unify Japan means that all the organization of all Japan territories which include worriers, common people, court novel and temples & shrines are under controlled by the rule established commonly in Japan.
After the long period of civil war era (1480-1590), three great top worriers named Nobunaga, Hideyoshi and Ieyasu finally had unified Japan by taking over their effort among them as shown in above table if they did that with consciousness or not, I am not sure. 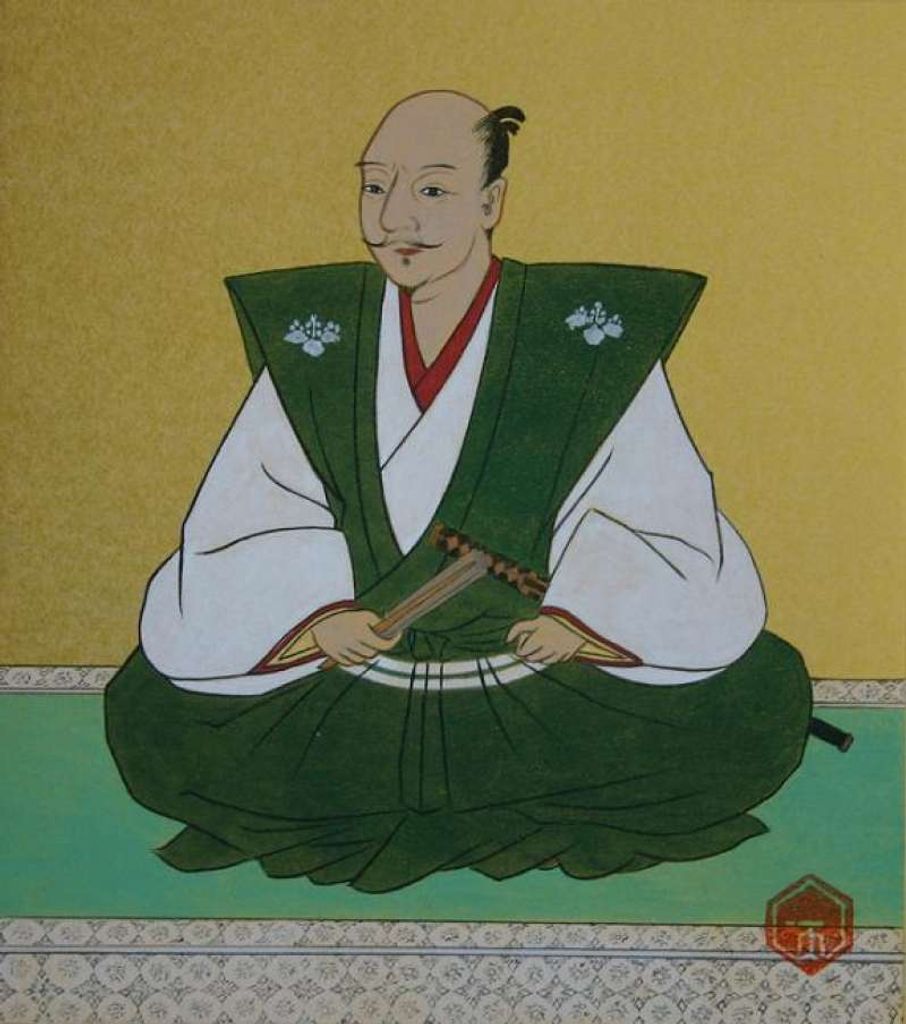 By visiting Osaka castle and watching that , I can images various historical events & struggle had occurred mainly caused by several historical great top worriers in Japan.
Hideyoshi founded Osakajyo castle after he unified Japan. He showed his great power to common people in Japan by the gorgeous and enormous castle and flourish castle town surrounding area.
He used to be a son of a farmer who is the lowest rank of people in Japan.  However , a lot of his positive clever strategy proposal to his load, Nobunaga Oda to whom he was a royal servant.  Eventually ,Nobunaga had considered Hideyoshi’s important capability for him to won their fight with other loads.
：
Acheivement by Nobunaga
Nobunaga Oda was the genius load of a territory(current Aichi prefecture) in Japan at that time-flame of 16th century.
He was the actual revolutionary and the most important top worriers who dramatically had tried to change Japan to be unified from the confused world due to wars everywhere Japan during civil war era.
He imported a lot of goods, clothes, technology information such gun weapons and so-on. He was said to be the best dandy worriers wearing a kind of European clothes. He was nonconventional load and he did lots of new policy applied. One of those is that he hired worriers for his servants as “ability first” even the man used to be the lowest rank of farmer such as Hideyoshi Toyotomi.
As the result, thanks to his advanced strategy and his many excellent vassals, he finally unified Japan, for the most part,  however before he complete the task, he was assassinated by one of his top vassals named Mitsuhide Akechi.
One of the reason of assasination is due to his too much radical character caused Mitsuhide’s betrayal.
The event of assassination is famous called “Honnojino-hen”.
Many foreigners who had come to Japan to see Nobunaga at the time-flame wrote lots of description about Nobunaga and introduced him to the world. The common points described was that he was the greatest top worrier during 500 years of Samurai society in Japan.
As soon as the assassination was informed to all vassals , Hideyoshi Toyotomi who is the best top servant to Nobunaga quickly fought with Mitsuhide and won the battle that led him as the successor from Nobunaga.

Acheivement by Hideyoshi
After he completed to unify Japan, he applied several new evolutional rules to control Japan with peaceful and prosperity.One example is to clearly separate the rank of people between Samurai (worriers) and other people such as farmers and merchants.
He ordered farmers and merchants not to use swords except Samurai.
Another is to establish how to measure the accurate land area and rice crop quantity for all farmers in Japan and to establish how to pay the land tax to worriers by rice-crop. The base of this policy had been transferred and applied to later stage of Edo era.

Before he is dying due to illness, Hideyoshi  wrote the famous farewell poem as follows.
“I appeared as a dewdrop, and disappearing as it is. All of my beloved Naniwa(Osaka) is just a dream of dreams."
This poem has deep meaning that even he gained everything unifying Japan and prosperity in Naniwa(Osaka), Life is but a dream.
In other words, I did a lot of work for Japanese peace and enjoyment of my life specially in my residence of Huge Osaka castle and Naniwa(Osaka), however, those are finally a dream of dream just when I go to heaven.
Ieyasu Tokugawa also used to be one of top load who served to Nobunaga and Hideyoshi.  After Hideyoshi unified Japan, he patiently became a top member of Hideyoshi's vassal.
The era of above is called Azuchi-Momoyama period when the ruling power of Japan had been owned by from Nobunaga to Hideyoshi (16th century).

After Hideyoshi's death , Ieyasu Tokugawa (East side of Japan) and Mitsunari Ishida who was one of a load servant to Hideyoshi (west side of japan) had fought by dividing worriers in Japan between east side and west side that is called the fight of Sekigahara.
As the result, Ieyasu won the fight and he gained the actual ruling power of Japan with Hideyoshi’s son "Hideyori” as only a symbol of Osakajyo-castle. After the long political and actual battle between Hideyori and Ieyasu, finally, Hideyori was defeated and killed by himself inside Osaka-castle which was completely burned out by Iyeyasu.

Acheivement by Ieyasu
After Ieyasu unified Japan in 1603 shown in the history table, he reformed almost all of the Osakajyo-castle by himself because Ieyasu considered that the remains of Hideyoshi must be completely removed.  If you carefully see inside the construction of current Osakajyo-castle, you will find that almost all of the castle has been reformed by Ieyasu and his successors in Edo period.

The original Osakajyo castle and surrounding area constructed by Hideyoshi was much wider than that of current area.
As you know, after Ieyasu unified Japan, he transferred the capital of Japan from Osaka where Hideyoshi set the capital to Edo (current Tokyo). Ieyasu constructed Edo castle as the residence and capital center instead of Osaka castle.
However, Osaka still has continued to gain prosperity as a big merchant town.
And in parallel, Kyoto has continued as the center of traditional Japanese symbol as Shinto and related traditional culture up to now.
As such, if you understand above history of Japan, you might be able to have much more fun for visiting Tokyo, Osaka and Kyoto.
Ieyasu founded the Edo era which had continued to be peace for 270 years that has led current Japan prosperity.
During the Edo era, the Shogunate government had applied the policy of seclusion and had limited the foreign trade parter only to China, Korea and Netherlands. It is said that one of the reason Edo era had continued to be peaceful for around 270 years and created Japan original culture such as Ukiyoe painting, Kabuki and so on is from the seclusion system without invaded by foreign countries.
Also, during Edo era, the education system for common people had been spread widely in Japan. Thanks to the system, more than 70% of common people learned the language & education that led the literacy rate as more than 50% which might be the highest rate in the world at that time.
However, on the other hand, during those days, some European countries had established advanced political governed system and advanced technology with enhancing the strong weapons. Therefore, during those timeframe, the technology gap between those countries and Japan had largely increased.  Finally, by Meiji restoration, the final Shugunate Yoshinobu Tokugawa returned their ruling power to Japan emperor and bloodlessly surrendered.
After the Meiji restoration by which Edo Tokugawa ruling power ended, the Remains of Edo castle has been transferred as Imperial palace at present.
After Ieyasu died with age of 75 in 1616.  His spirit was deified in Nikko Toshogu which is located far north-east from Edo as Ieyasu's order because he intended to protect Japan from any evil who are usually come from the direction even after his death. He also instructed his successors to set other deities in his Shrine as Yoritomo Minamoto and Hideyoshi Toyotomi who were the historical top worriers made the foundation of Worriers. 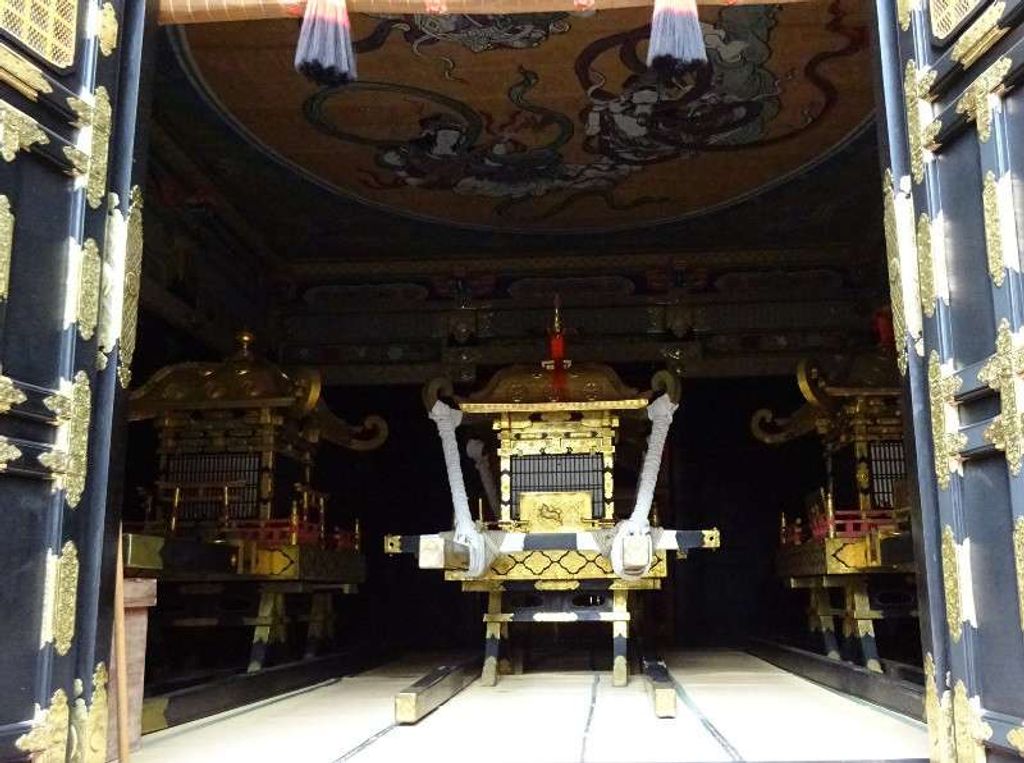 In above photo, left side of portable shrine is for Yoritomo, that of right side is for Hideyoshi and that of center is Ieyasu by himself.
He apparently understood their acheivement and showed the respect for them to contributed Japan become safe and rich country.
Also, during your visit in Nikko Toshogu, there are lots of evidence which show how Ieyasu hoped to attain the peace in Japan.
One example is the sculpture of sleeping cat and sparrows as shown below. Cats usually eat sparrows , however the cat carved at front top of the east entrance gate.is sleeping and the sparrows carved on the back side of the gate are happily playing. As such, they are cooperating to live each other.
Please vist below site showing Osaka tour registered by me.

Please once visit Osakajyo castle and try to see the atmosphere with a little understanding above historical background.

Plan your trip to Osaka with Kashima H.