As you see, Japan is a "bamboo country" with various kinds of bamboo rooted deep into diverse aspects of our lives. Actually when you travel across the country, you'll see bamboo out there all the time. So bamboo or "take" in Japanese is something special in Japanese culture along with pine trees and Japanese apricots.  So-called "sho-chiku-bai "(pine tree, bamboo, Japanese apricot) are regarded as highly auspicious in Japan.

As far as bamboo, most Japanese people feel that it has the very vital energy, growing fast/upright. Also a real healing character. Indeed whenever strolling along Arashiyama Bamboo Forest, I take a deep breath and enjoy feeling its healing energy.

Quite interestingly Thomas Edison used Japanese Bamboo in Kyoto area as a useful filament for his original light bulbs early on, which I found on display at the Smithsonian, Washington DC, in 1996. Bamboo is not just about Kyoto's Arashiyama, but nationwide. Japan's Bamboo forests, if put together, are about as large as two thirds the metropolitan area of Tokyo in terms of land area. 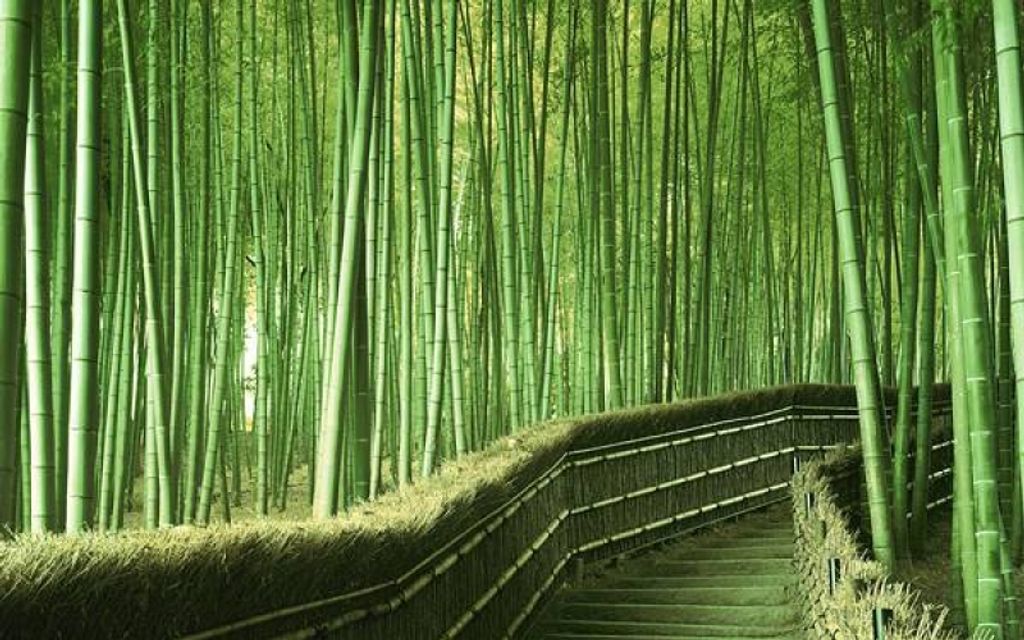 Importantly bamboo is one of the indispensabale elements of Japanese-style gardens. 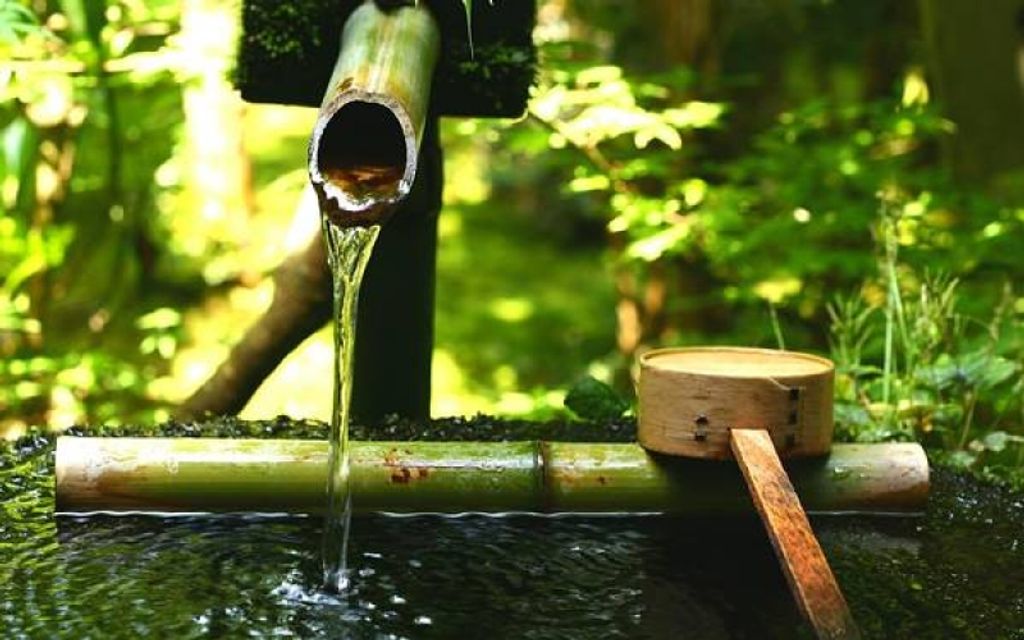 Here's an example of shishi-odoshi or dear-scarer, which makes a clapping sound at intervals, when it striks a stone underneath, by the flow of water going down through another bamboo cylinder. Actually shishi-odoshi is not for scaring dear, but for people to enjoy taste. 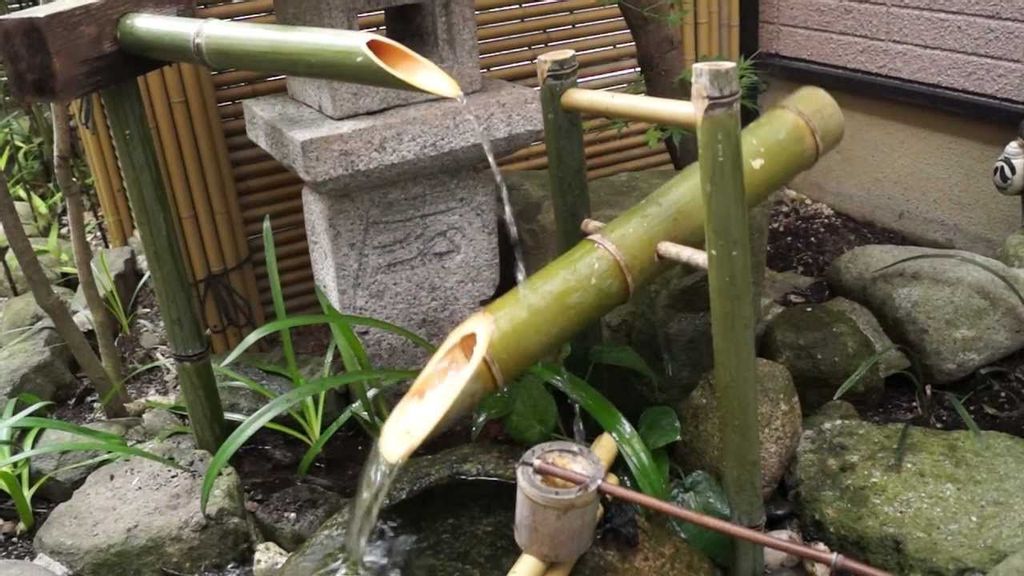 As you know well, bamboo grows quickly, taking about 55 DAYS to reach the height of 20 meters max. Much faster than anything else. Also bamboo forests were believed to be effective as shelter from earthquakes, and bamboo groves were built across the country to make land harder.

Allow me to dig a bit deep into the bamboo. Back in the 16th century, feudal lords had their local people plant bamboo on river banks in their territory to prevent them from possible breaching and flooding the surrounding houses/fields. 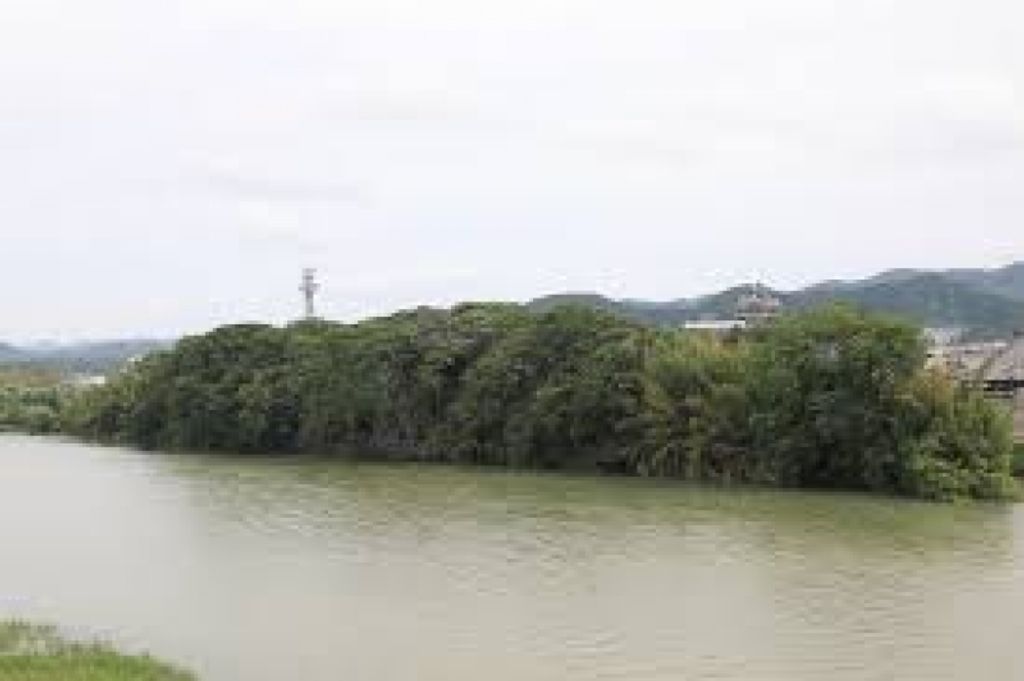 Now you may wonder if Japan has some old tales connected with bamboo. Exactly. The most popular is Taketori- monogatari (take standing for bamboo, tori for take/cut, monogatari for tale).

Taketori-monogatari, The Tale of Bamboo Cutter, is believed to be Japan's oldest tale depicted during the late-9th to early-10th centuries. It is commonly known as Princess Kaguya, who was born inside a glimmering bamboo shoot, and brought up by an old bamboo cutter and his wife. Later Princess Kaguya was proposed by several nice young men. However, one night she went back to the moon, after declining their on-going passionate proposals.

Let's take a close look at the picture below. Princess Kaguya is on the sedan chair bound for the moon. She is surrounded by her waiting maids, some of whom are playing classic musical instruments. Her parents in the foreground look weeping over their sudden farewell. Also a nobleman looks saying goodbye, and three dumped samurai on the roof appear too disappointed to face up to Prince Kaguya. Poor fellows! I do know how they feel! That's what men's life is all about!? 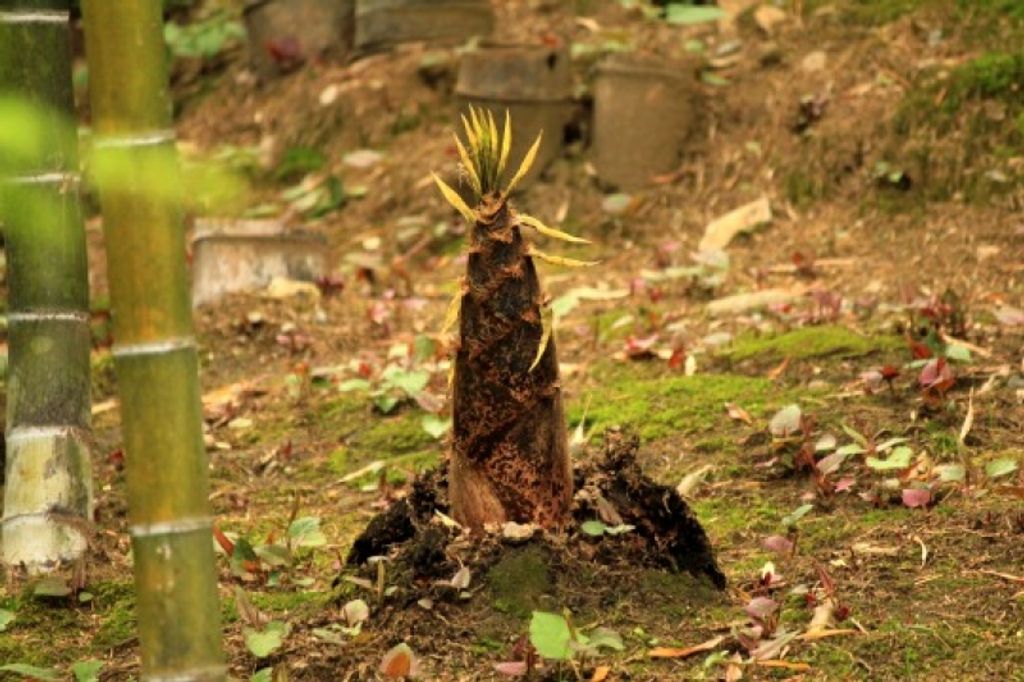 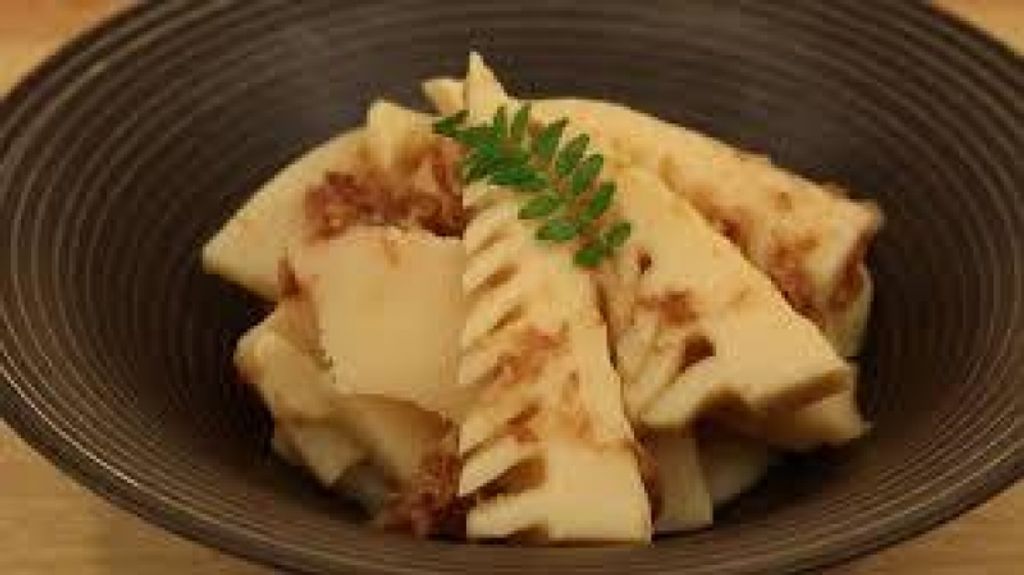 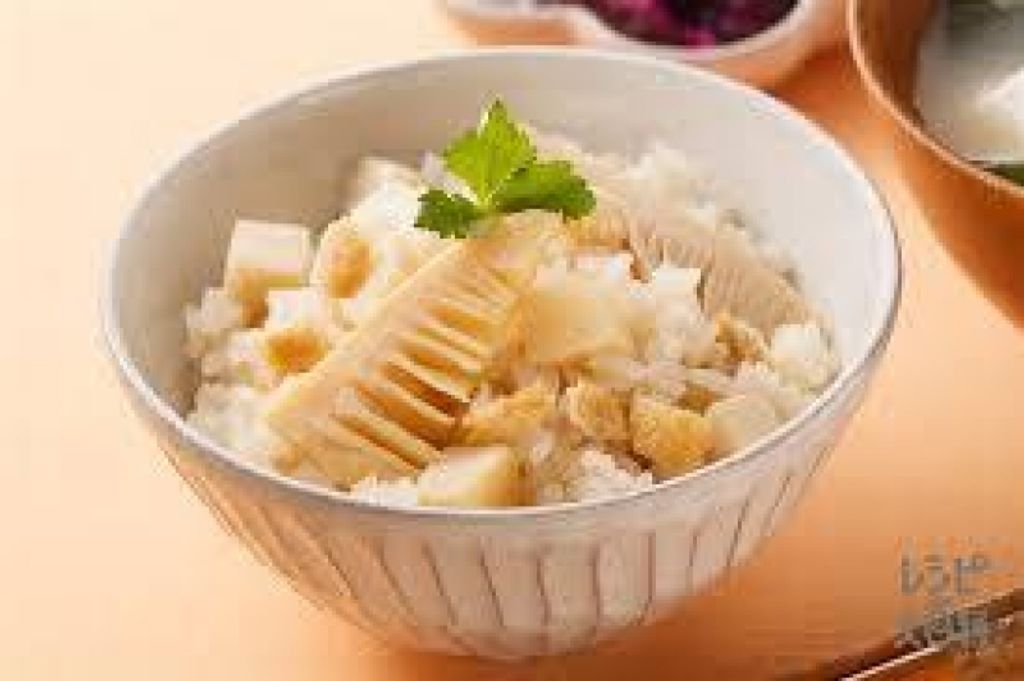 More interestingly, power of bamboo charcoal can be used in traditional Kyoto cuisine to improve its texture.

Bamboo is also used in many aspects of Japanese traditional culture as follows. 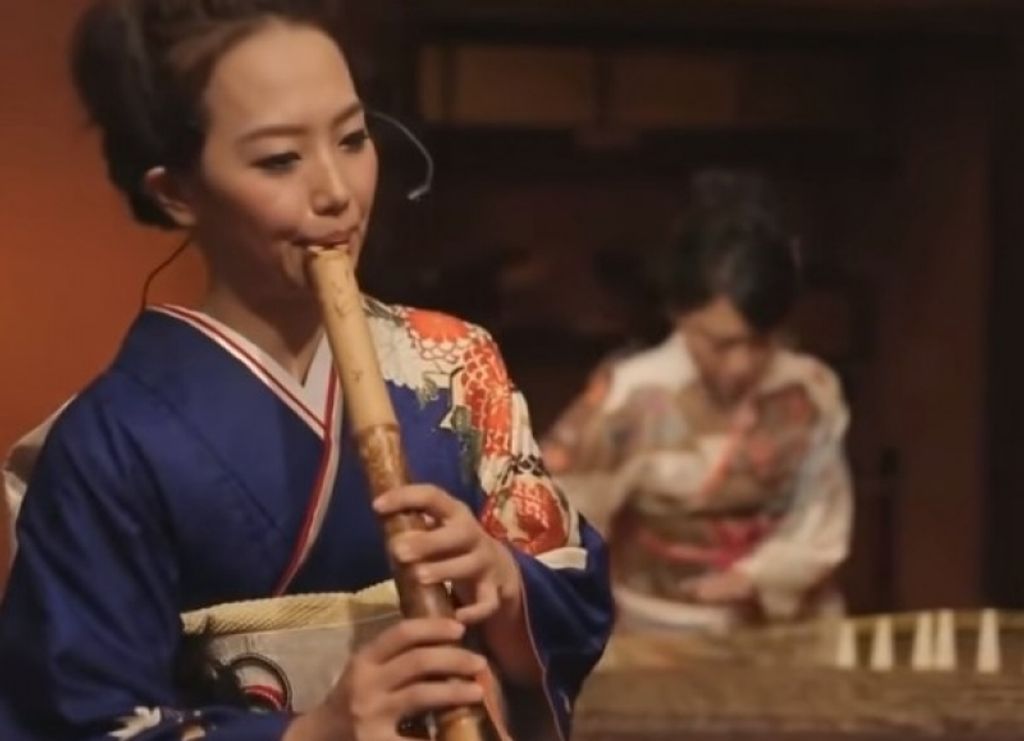 2. Bamboo work such as a dragonfly-shaped bamboo as a toy, lunch box, round fan, bag, and broom as daily necessities, and much more. 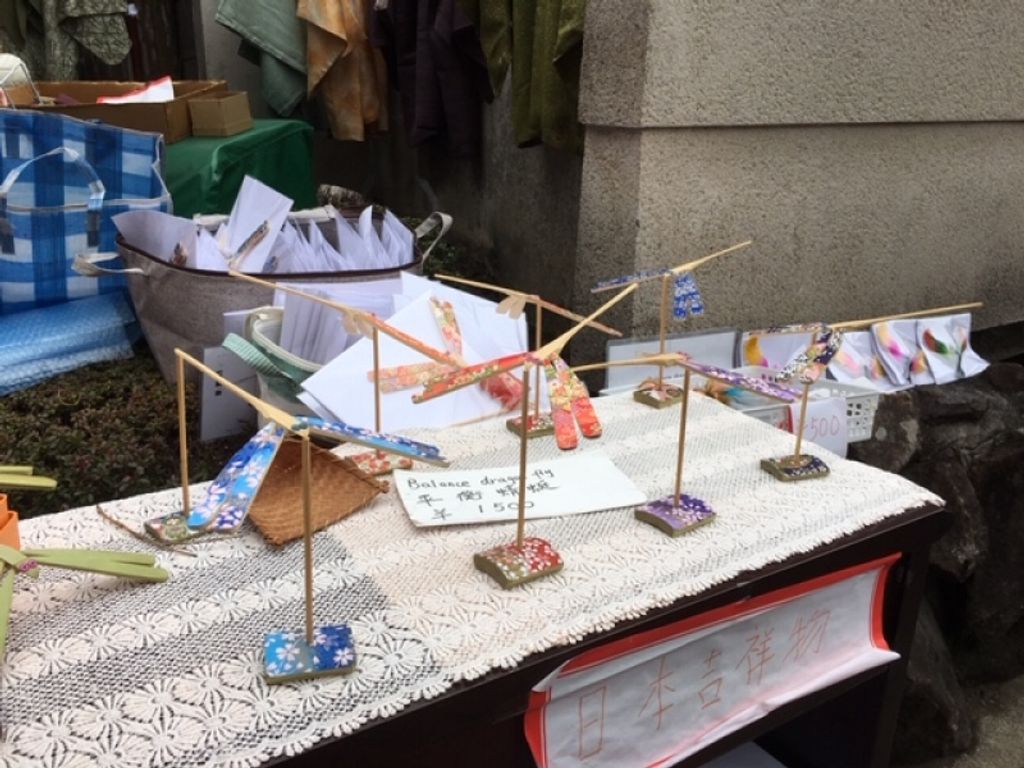 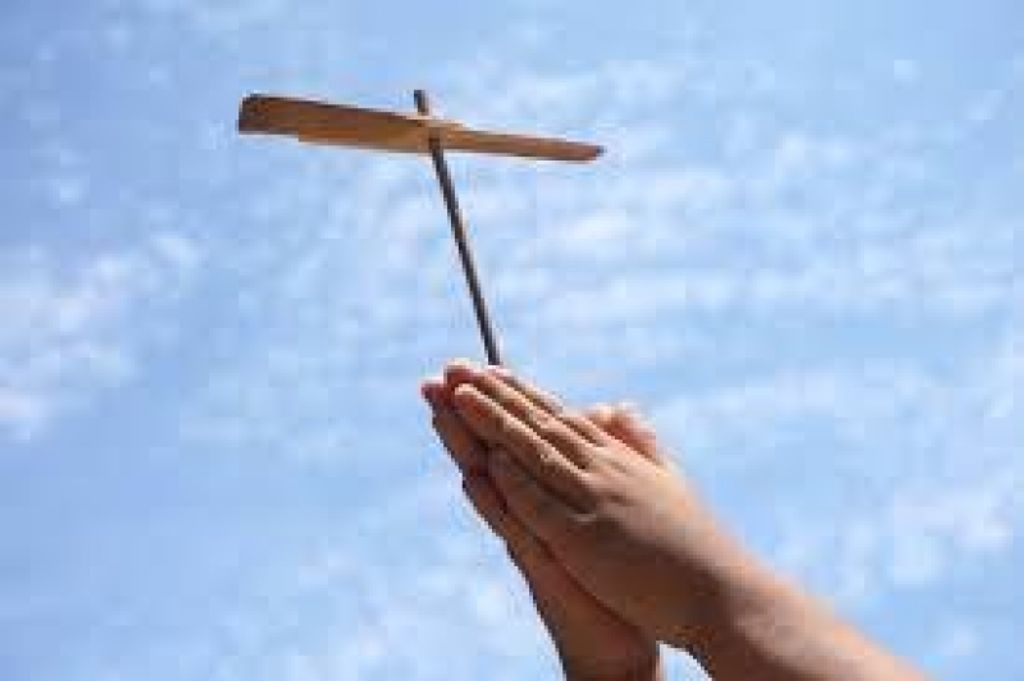 3. Lunch box (Bento-bako) made of bamboo 4. Round fan (Uchiwa) made of bamboo and colorful paper 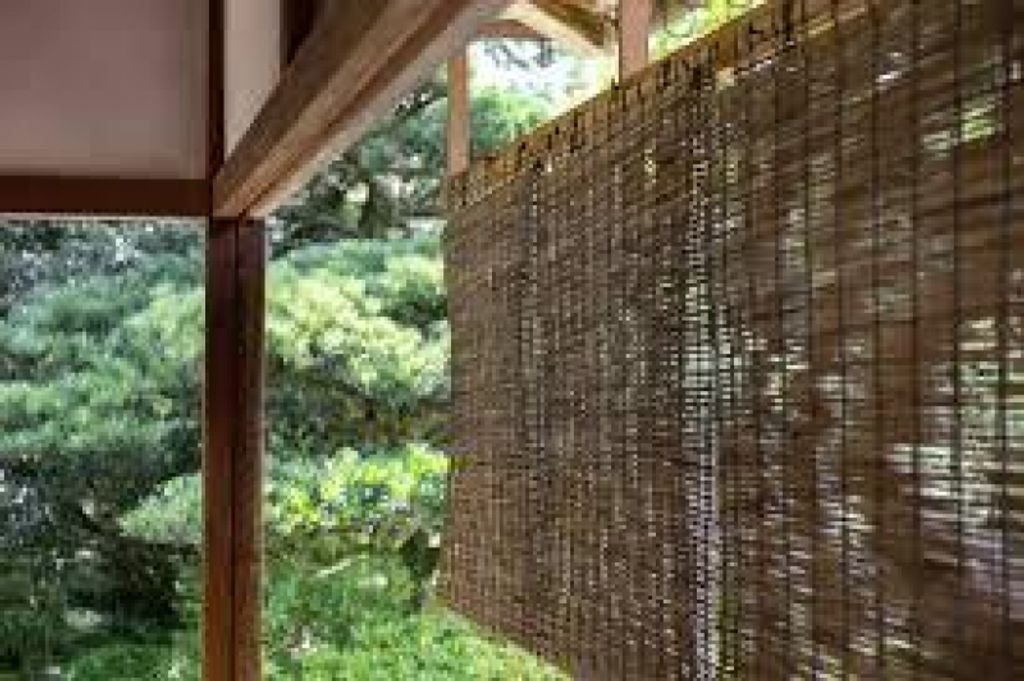 Late Kazuo Hiroshima (1915-2013) from Miyazaki in southern island of Kyushu, is one of Japan's most famous bamboo work craftspersons. He dedicated his whole life, over 80 years, to bamboo work, supporting daily lives of local people. Some of his woks are displayed in the British Museum and the Sumithsonian Institution.

The Minami-Soma Municipal Board of Education, Fukushima Prefecture, press-released an ancient basket weaved from thin strips of bamboo and bamboo leaves. The basket, 33 cm tall and 20 cm wide, is about 3,000 yo, containing hundreds of about 3.5 cm-diametrical edible walnuts.

It's amazing that back then, ancient people had their excellent bamboo-weaving skills and enjoyed eating yumy walnuts.  This great finding also shows that bamboo can survive over 3,000 years under the ground. 3. Shinai or a bamboo sword used in Kendo, or Japan's traditional martial art of swordsmanship In kyoto bamboo is also used as take yarai (take=bamboo, yarai =keep away) or inu yarai (inu=dog, keep away). It is a kind of bamboo fence, which doesn't deteriorate easily over rain drops. You'll see them here and there in Kyoto, especially Gion area. Now you might wonder why the bamboo fence is placed in Kyoto.

Its main purpose is for security reason, in other words, to keep away strangers. Kyoto was Japan's capital for over 1,200 years, having seen a lot of battles in its history, especially among military governors in the 15th century. This is why Kyoto local people tended to close their doors to strangers coming from Raku-gai (outside of Kyoto). The bamboo fence, placed along the walls, works very well to prevent any stranger from stepping in.

Another one might be for sanitation reason, to keep away dogs/cats. They tend to urinate anywhere/anytime they like, keeping or expanding their turf, which may rot down the foot of wooden pillars/walls.

More importantly, this is not all about only dogs/cats at Gion area. This is also about drunkards! So here's my question to gentlemen; i.e. if you see a drankard facing take yarai, "What Would You Do?" (Actually US ABC's TV program under the same title sounds so touching.) So. Gentlemen, let's enjoy drinking MODESTLY.:) Kadomatsu, composed of bamboo, pine branches and some flowers, is placed at the entrace of houses, and offices to drive away bad luck of the passing year and to welcome a Happy New Year. Because bamboo and pine trees have vital eneergy. Kadomatsu has a long history, dating back to the Heian Period (794-1191). As a country kid, I used to make a variety of stuff such as a dragonfly, toy gun, fish spears, stilts, and even skies with bamboo, which was super fun. Yet Japan saw a dark past; the military crassly forced school girls to practice bamboo spears across the country at the final phase of the World War Ⅱ. Very very sad.

Finally, a little more information for those who have a sweet tooth. They serve good "bamboo ice cream" at an ice cream shop in Arashiyama, Kyoto. Most probably we can't find it anywhere else in Japan? Where is it? Oh, I miss my childhood.

After getting off at Arashiyama train station, walk to the right, north. You'll find it on your right in five minutes. I think it's worth a go as a story of your Kyoto travel.:)

Many thanks for joining. Have a nice day.:)

You'll Never Say, "What a Shock!" "Washoku" Is the Very Soul of "Omotenashi" Japan!

Hello. Huge welcome to Wa-shoku! And I'm sorry for my trivial pun in the title. Hopefuly I'm not a "pun man?" First of all, a touch of information ab...

OIDE-YASU (warm welcome in the Kyoto dialect) to Kyoto's Maiko. First of all, you may wonder what Kyoto's Maiko is all about, like  "Are they so-call...

Huge thanks for visiting sakura Japan. Ever since the Heian period (794 - 1185) "hana" (referring to flower) has long been about sakura (cherry bloss...

Ready to Enjoy "Sake" for Sake of Your Fantastic Memories?

Warm welcome to Sake. Super Happy News!! Junmai Ginjo Fukuju made by a sake brewery in Kobe, one of the best sake capitals, was served at a banquet a...

This is a one-day tour of Kyoto. Kyoto is an ancient capital for over 1,000 years. You will visit Kinkakuji Temple, Arashiyama Bamboo Forest, Kiyomizudera Temple, and Fushimi Inari Shrine. All of these places are World Heritage Sites. You will also walk about at Gion area in central Kyoto, where, by chance, you will see a beautiful Maiko/Geiko.

In this tour we will visit must-see places in Nara and Osaka. Nara was an ancient capital of Japan in the 8th century. We'll visit Todaiji Temple, housing the gigantic Great Statue of Buddha, and Kasuga Grand Shrine. Let's go to a nearby nice sake brewery, if you love sake. Osaka Castle was built in the 16th century. Let's go up to the top of the castle tower. You will feel as if you were a shogun. We also visit bustling Dotombori Downtown Osaka.

We'll visit three places, rich in Japan's history and culture. Firstly, Himeji Castle designated as Japan's first World Heritage Site in 1993, and ranked 7th as a place to visit in 2019 by NY Times. And Kokoen Japanese Style Garden nearby. Finally, Engyoji Temple, ranked 20th by TripAdviser in 2019 as Japan's representative spiritual heartland. Himeji is one hour away by the Shinkansen from Kyoto.

This one-day private tour includes must-see tourist spots in Osaka. We will visit Osaka Castle, Kuromon Market plus Dotombori both at downtown Osaka, and Umeda Sky Building. In this tour we will see the present and past of Osaka and its energetic people.

This is a 1-day private tour of eastern Kyoto. We will visit must-see places in eastern Kyoto with over 1,200 years of history, such as Ninenzaka & Sannenzaka alleys, Kiyomizudera Temple, Sanjusangendo Temple, Fushimi Inari Shrine, Fushimi sake brewery, and Gion area.

Plan your trip to Kyoto with Shogo K.