From the middle of September, the leaves in Japan begin to change to red. A popular activity in Japan is to view these beautiful leaves. If you are travelling to Kyoto in autumn, then be sure to take a break from the usual sightseeing, and relax in areas of stunning nature to fully experience the colours of autumn. Here are the top five places to view autumn leaves in Kyoto: 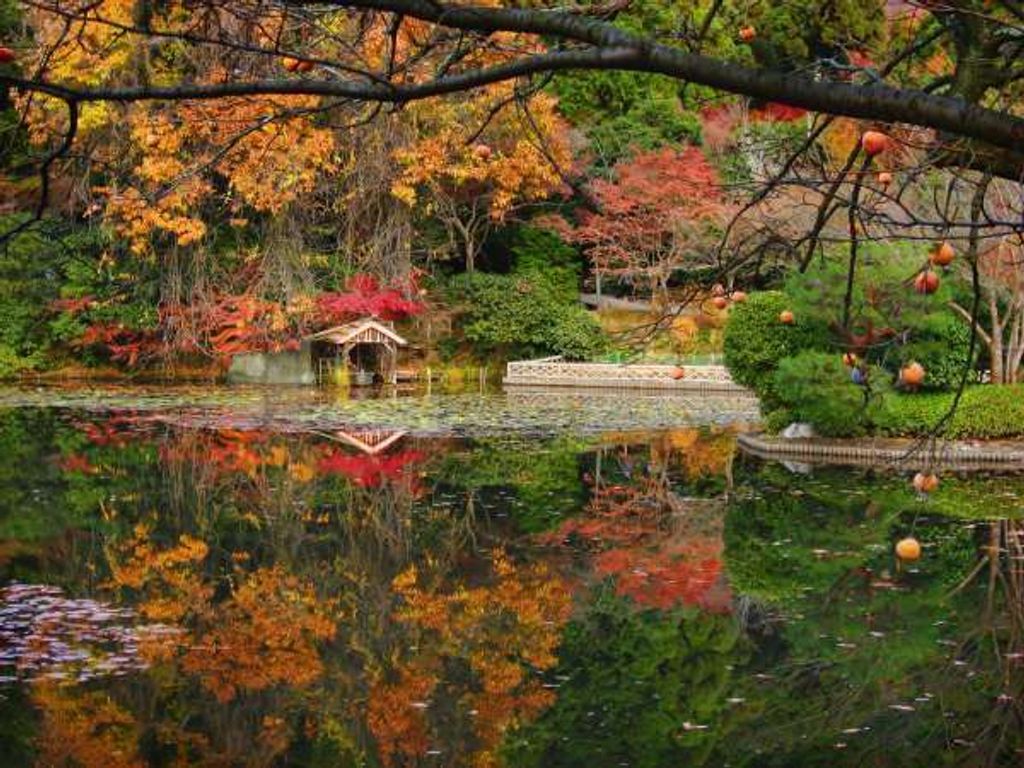 The Rock Garden at Ryōan-ji is listed as both A National Site of Special Scenic Beauty and a National Historic Site. As a karesansui, or dry landscape, garden, sand is used to represent the sea, its waves represented by lines drawn in the sand using a rake. The stones are said to represent mountains and islands.Additionally, the Rock Garden’s meanings are interpreted variously as a “Garden of Tiger Cubs Crossing,” or as the shape of the Chinese character for “heart” or “mind,” among other interpretations. Although the meaning remains unclear, the appeal of the Rock Garden is the quietening of the mind that one feels simply by looking. In the Rock Garden at Ryōan-ji, nature can be enjoyed in each season, but especially in spring, when the Rock Garden’s beauty is enhanced by the weeping cherry blossoms. Of course, in the summer the rich green color of the Japanese maple trees, and their leaves changing to red in autumn, are also beautiful. Owing to the snow that also falls in the Kyoto valley, there is also the view of the Rock Garden covered in snow. Sometimes called Hojo-teien (or The Chief Priest’s Garden), it said the garden was made to be viewed while sitting and looking out from the hojo, or the Chief Priest’s residence. By slowing down to view the Rock Garden, one can pass the time clearing the mind.

Even outside the Rock Garden, Ryōan-ji is full of charm. Kyoyochi Pond at Ryōan-ji has become even more famous than the Rock Garden. In front of Kyoyochi Pond, there is a circuit-style pond-strolling garden with a boating pond, with beautiful changing leaves in the autumn. From this garden, Mt. Kinugasayama can be seen, and the contrast between the colors of the autumn leaves and the sky at dusk is an especially beautiful, popular thing to see. In addition, with their beautiful greens and pinks, the water lilies blooming radiantly on the water in the summer season are also recommended.Japan’s oldest type of camellia, the wabisuke camellia, is also found here in Ryōan-ji. 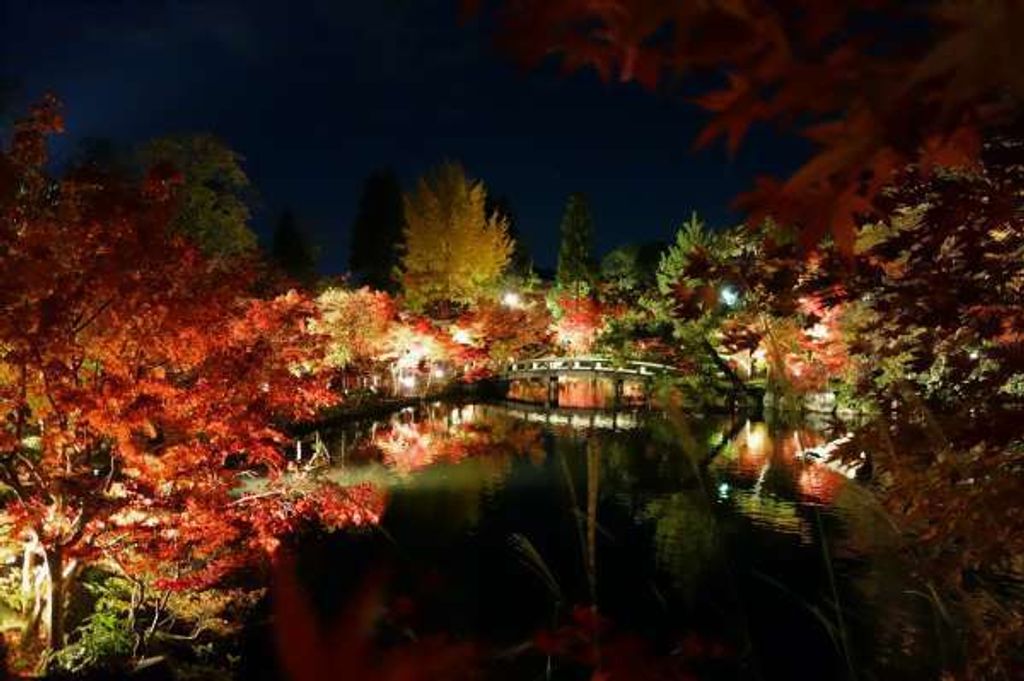 In 853, Shinjo, the student of the monk Kukai, established the temple.  The official name is Zenrin-ji, but due to the deeds of helping out the disadvantaged by the 7th head monk Yokan, it started to be called Eikan-do. Since long ago, fall foliage that strives to become the best in Kyoto can be seen here to the extent that people say “Autumn means the maples in Eikan-do”. Passing through the main gate, the path lined with autumn trees continues on, and there is a breathtaking beauty to the leaves that can be seen over the tiled roofs. The scenery of the bright red autumn leaves reflected in the large Hojo Pond and Kin’un Bridge within the grounds is splendid. In November, you can appreciate the beautiful autumn leaves when they are illuminated for night viewing. At night, the pond becomes like a mirror, and the leaves reflected in the pond at a 360-degree angle is marvelous. During the fall season, the crowds are very heavy so it is necessary to allow for time. But Eikan-do also has plenty of things to see even outside of fall. There are ceremonial piles of sand in front of the Karamon gate used by the Emperor which are stepped on before entering Shaka-do Hall to cleanse the body. Vivid images are painted on the fusuma sliding doors among the 6 rooms that make up Shaka-do. Midway, there is the “Trident Pine”, an unusual tree which splits into 3 main branches. It is said that holding the needles will grant you “wisdom”, “compassion” and “sincerity”, and they can be obtained for free at the souvenir shop on the grounds. The wooden stairway, Garyorou, is along a mountain slope and it feels like walking through the inside of a dragon. Brilliantly painted pillars are present in the wonderful Amida Hall which is famous for the “Mikaeri Amida”, a statue of the Amida Buddha looking over its shoulder. At the hall one early morning, Yokan had been training in the hall when the Amida Buddha appeared in front of him, looked back over its shoulder and said “Yokan, you are slow” with a calm smile.

Takao is known as the famous area in Kyoto whose leaves change color the earliest. It’s an area by the Kiyotaki that flows at the foot of Mt. Takao, and with the Kitayama cedar in the background, the scenery of a mountain hamlet with its continuing beautiful fall colors spreads out.  From early November, the trees change color and by mid-November, it is the place to see. In addition, you can enjoy the expressions of the four seasons with the cherry blossoms and azaleas of spring, the new leaves of summer and the snowscapes of winter.

Jingo-ji Temple is the most popular site in Takao. Built in 781, it’s a Shingon Buddhist temple that was administered by the monk Kukai for 14 years. From a location beyond the Kiyotaki River, there are about 400 stone steps that will take you to the roumon tower gate. Once past the gate, you will see the shoin parlor, Daishi-do Hall and Godai-do Hall along with the temple bell at the bell tower. The bell was cast in the year 875 and is one of the Three Famous Bells in Japan, designated as a National Treasure. On either side of the stairs leading to Kon-do Hall, you can view the beautiful autumn leaves. In Kon-do Hall, a wooden statue of the Yakushi Nyorai is enshrined. At the very back of the temple grounds in the garden of the Jizo-in temple, you can view the beautiful valley of Kin’unkyou. Here, the ceremonial cleansing of “Kawarake Nage” is famous. Facing the valley, the kawarake, or unglazed plates, are thrown to exorcise your demons.

Saimyo-ji Temple is a 10-minute walk from Jingo-ji and from there it’s another 10 minutes to walk over to the World Heritage site of Kousan-ji Temple. Known as a famous place for the fall colors, Saimyo-ji also has the blossoming of the donarium cherry trees, the 1000-year-old Meoto Cedar and other sights during the peak time of November. Starting from the statue of Shaka Nyorai (an Important Cultural Property), many Buddhist statues are enshrined there. Kousan-ji is surrounded by cedar forests and within the beautiful temple grounds with its fall colors, Japan’s oldest tea garden exists as the site where tea was first cultivated in the nation. The wide mountainous view from the National Treasure of Sekisui-in is wonderful, and sights such as the Choju-Jinbutsu Giga (caricatures of birds, animals and humans) can be observed. 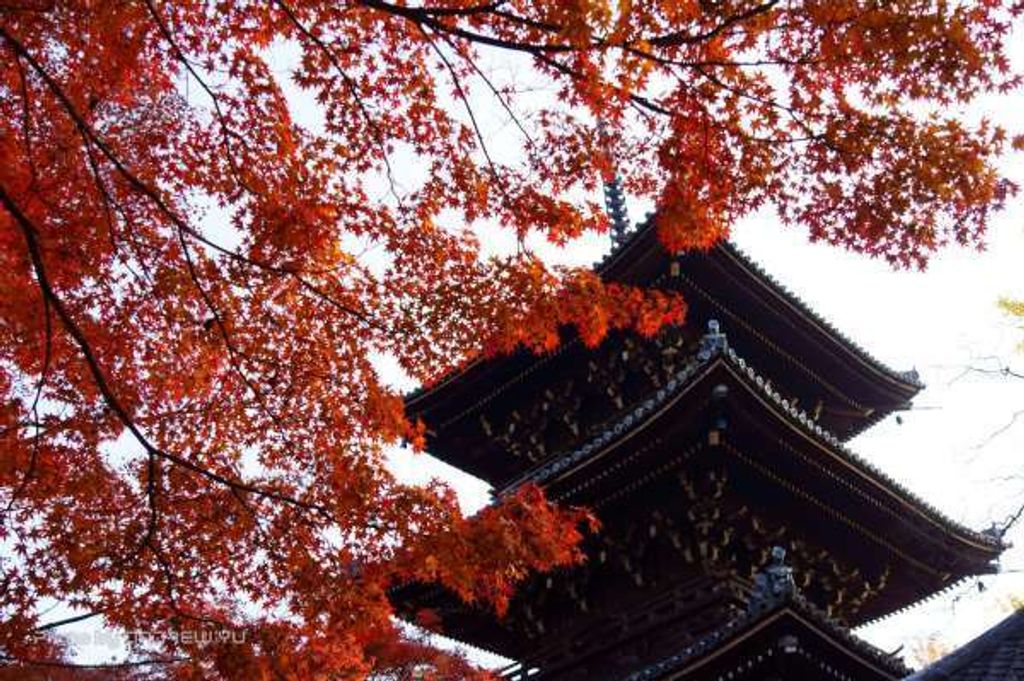 The origins of Shinnyo-do go back beyond the 1st century. In the year 984, Kaisan Shonin established the temple when he moved the statue of Amida Nyorai which had been enshrined at Enryaku-ji Temple to Kaguraoka in Kyoto. As a place of training for fudan nenbutsu (constant invocation), ascetics and regular people especially women came to patronize the temple. However the temple buildings were burned down due to the frequent fires during the Onin War. Afterwards, the site of the temple was moved repeatedly, finally settling down in its current location in 1693. Admission to the inner shrine, parlor and garden of the main hall is free and can be toured within 30-40 minutes.

In the inner shrine of the main hall, the principal image of the Amida Nyorai is enshrined. It is known as the oldest surviving standing statue of the Amida Nyorai which has the alternate name of Unazuki-no-Amida or the Nodding Amida. There is a story in which if a prayer asking for practitioners to be protected is made, the Amida Nyorai would shake its head while if a prayer asking for the people, especially women, to be saved is made, then it would nod its head. Usually, the doors to the inner shrine are closed but from November 5th to the 15th, they are opened during the Buddhist memorial service of Ojuya. And it is only on the 15th that the Amida Nyorai can be approached closely. In addition, from 2 p.m. on that day, the Ojuya is brought to a close. People as diverse as monks and children join the procession moving within the temple.

Shinnyodo is very famous as a place to see the fall colors. The stone-paved path that starts from in front of the main hall and drops to the west becomes a tunnel of autumn leaves where you can enjoy a scenery not unlike that in a painting. Although it depends on the year, the peak for the fall colors within the temple is from late November to early December. The peak of the autumn season is one highlight but the scenery after that is also superb. Around the Tourou Daiishi (Lantern Pedestal) at the back of the main hall, there is a scarlet-red carpet of fallen leaves. Almost all of the autumn foliage can be seen for free, but the Nehan-no-Niwa (Nirvana Garden) which requires admission is recommended. And the collage of the dry landscape garden and the mountains of Higashiyama make for a poetic beauty.

In 1601, Ieyasu Tokugawa invited monks with the intention of developing national education, and so he opened a school at Enko-ji in the Fushimi area. Regardless of whether they were monks or laymen, all could enter the school, and numerous issues of one of Japan’s early examples of a printed book, the “Fushimi-ban” were made. The wood-cut letters used in the publication still exist. After entering the Sanmon gate, the Honryuutei opens up before your eyes as a traditional dry landscape garden with its white sands billowing like a sea of clouds. Furthermore, going past the Chuumon gate, there is the Juugyuu-no-Niwa Garden, famed for its autumn leaves and moss.

Seiryuu Pond, the oldest of its kind in the northern part of Kyoto, is located in a garden that wraps around the pond and was created based on “The Ten Ox-Herding Pictures”, images showing a ranch hand going after his oxen. The contrast of the beauty between the fall colors from 200 trees and the green color of the moss is splendid. The view of Juugyuu-no-Niwa Garden, as seen from the parlor, is framed like a painting by the pillars of the building, and it’s called a picture-frame garden because of its painting-like beauty. From the suikinkutsu, used as washbasins, the sound of water falling drop by drop is soothing to visitors. At the Honryuutei Garden with its choice of white sands billowing like a sea of clouds and arrangement of stones that depict dragons soaring through the sky, the vivid autumn leaves are put to colorfully good use. You can enjoy the blazing autumn colors below you from the top of the mountain inside the grounds, and off in the distance, there is the view of the mountains of Kitayama and Arashiyama.