Five Things to see During a Trip to Hiroshima

If you are planning a trip to Hiroshima, be sure to check out Itsukushima Shrine, the number one attraction for tourists on TripAdvisor in 2015. The Hiroshima Peace Memorial Park is a great place to learn about Japan and the 1945 atomic bombing of Japan. Here are our five top attractions in Hiroshima: 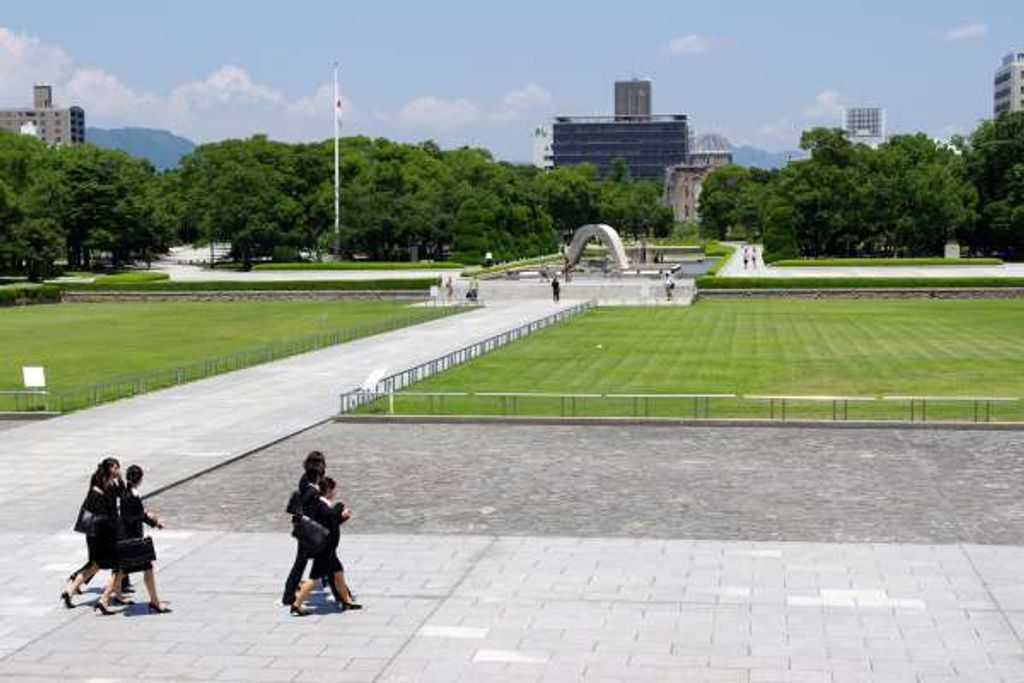 Hiroshima Peace Memorial Park is on the opposite side of the Atomic Bomb Dome across a river. Praying for eternal world peace, this park was established near the hypocenter of the atomic bomb explosion. A large number of monuments to the atomic bomb victims and peace monuments are set up in the vast grounds of the park. The monument at the center of the park dedicated to the atomic bomb victims is shaped in a form of a house to protect the souls of the victims from rain and wind. When looked at from the front, you can see the Atomic Bomb Dome in the distance just under the “roof” of this house-shaped monument. The engraving on the stone plate inside this monument reads “Please rest in peace; for we shall never repeat the error.” The rock chamber in the center contains 107 booklets that list the names of atomic bomb victims (292,325 people).

The model for the girl of the Children’s Peace Monument is Sadako Sasaki who had been exposed to the atomic bomb radiation at the age of 2 and died of leukemia at the age of 12. Prompted by the suggestion of a young man who found out about Sadako’s death from a newspaper article, funds were raised and this monument was built to commemorate the souls of the children who lost their lives due to the atomic bomb. The Bell of Peace built in the park in 1964 is used every year at the annual Peace Memorial Ceremony held on August 6. Also, it has been selected as one of Japan’s 100 sound-related spots people wish to preserve for future generations. In addition to the annual ringing of this bell, a chime is played every morning at the park at 8:15, the time when the atomic bomb was dropped. The Hiroshima Peace Memorial Museum is also located in this park. This museum collects and displays the belongings of the atomic bomb victims as well as images and materials that depict the horrors caused by the bomb. 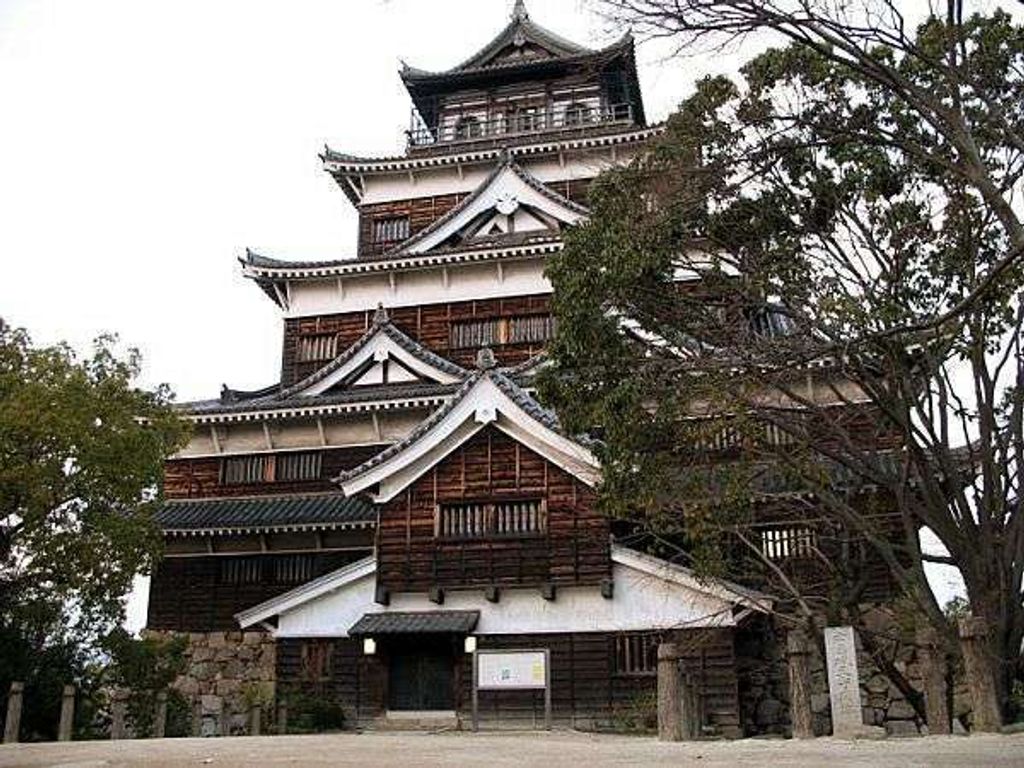 Hiroshima Castle is a 15-minute walk either from the JR Hiroshima Station or from the Atomic Bomb Dome. The castle was completed in 1589. It is said that a feudal lord during the Warring States period, Terumoto Mori, initiated the construction of the castle after feeling the necessity of having one following a visit to the Osaka Castle upon an invitation from Hideyoshi Toyotomi, a preeminent feudal lord who eventually brought an end to the Warring States period. Though it was designated as a National Treasure in 1931, it was blown out by the atomic bombing in 1945. The tower keep (tenshukaku) was restored completely by the 1958 restoration construction project; however, the exterior is made by concrete. Inside the tower keep is a museum of history that introduces the samurai (buke) culture. The most popular attraction at the museum is the space where visitors can try out wearing samurai clothes and helmets and take pictures freely without being attended by staff members.

The top floor of the castle has an observatory from which a panoramic view of the Hiroshima City can be seen. If the weather is good, you can see the island of Miyajima in the distance. Hiroshima Castle is also known as the castle of carps (Rijyo); many say that this name comes from a geographic name, but some say that the name comes from the fact that in the old days, there were many carps swimming in the moat. Whichever the case may be, today, many carps swim around in the moat. The connected yagura watchtower structures of the ninomarusection–omotegomon gate, waki-yagura, tamon-yagura and taiko-yagura–were restored as wooden structures in 1994; the interior of these structures are open to the public. A gate of sophistication and grace, the pillars of the omotegomon gate are partially made of wood from a thousand years old hinoki tree. The moat and stonewalls remain in the conditions they were at the time of the bombing. Hiroshima Castle has been selected as one of the 100 great castles of Japan. Also, on the grounds of the castle are a large eucalyptus tree and a willow tree which survived the atomic bombing. At night, the tower keep is lit up; the upside down view of the tower keep reflected on the water of the moat is breathtaking. 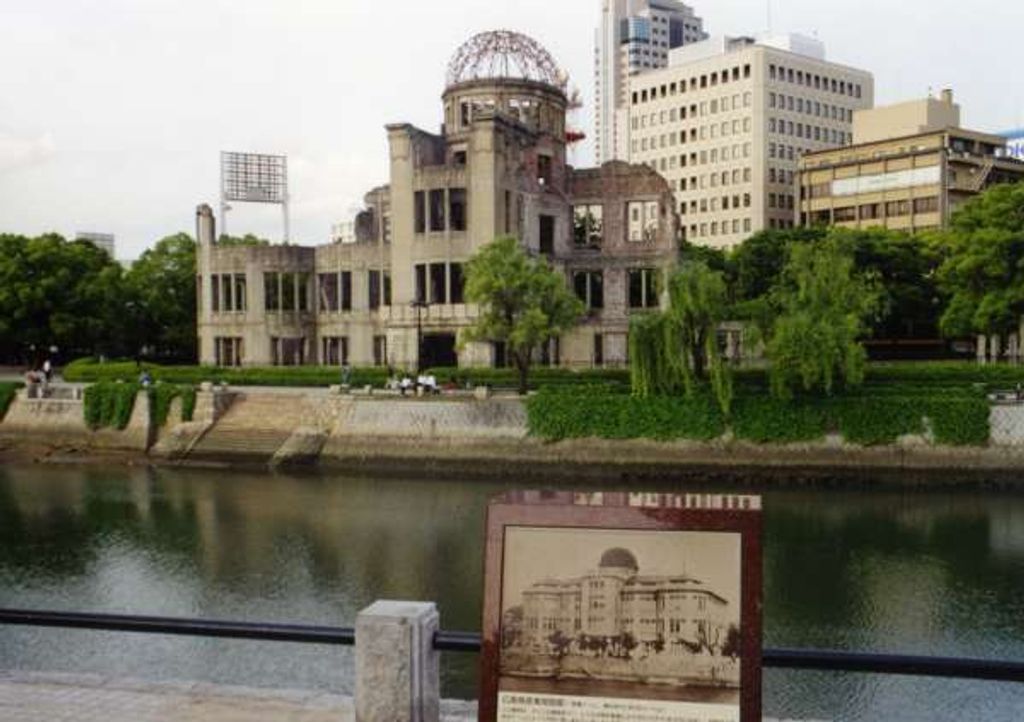 The building was designed by a Czech architect Jan Letzel and was opened as a hall for displaying products of Hiroshima Prefecture. It was a modern, three-story brick building with a European architectural design and a characteristic dome. Together with its reflection in the river, this elegant building was considered one of Hiroshima’s scenic spots. However, more than 90% of Hiroshima City’s buildings were blown out or burnt down by the atomic bombing on August 6, 1945. Located only a short distance away from the hypocenter, the building was exposed and damaged entirely by fire but miraculously, it was able to retain most of its structure. Though cracks and other damages of this building–renamed as the Atomic Bomb Dome–progressed in subsequent years, the building underwent a preservation construction project in 1967 which was funded by a total of 66,197,816 yen that had been donated from around the world. Since then, enabled by subsequent donations, preservation construction projects and conservation researches have been conducted twice.

Because the Atomic Bomb Dome is the only building in the world that coveys the horror caused by an atomic bomb in the same state as it was immediately after the bombing, the building was listed as a World Heritage site in 1996 as an unparalleled symbol of peace that appeals for the total abolition of nuclear weapons and speaks of the importance of peace. Though visitors cannot enter the Atomic Bomb Dome since it is fenced off, viewing it from the outside is more than enough to observe the terror of the atomic bomb. On the opposite side of the Atomic Bomb Dome across the Motoyasu River is the Peace Memorial Park, a highly recommended complex for learning about the conditions at the time of WWII. If you are planning to go to Itsukushima shrine at Miyajima, you can take an excursion boat from a stop in front of the Atomic Bomb Dome; the boat will get you there in about 45 minutes. 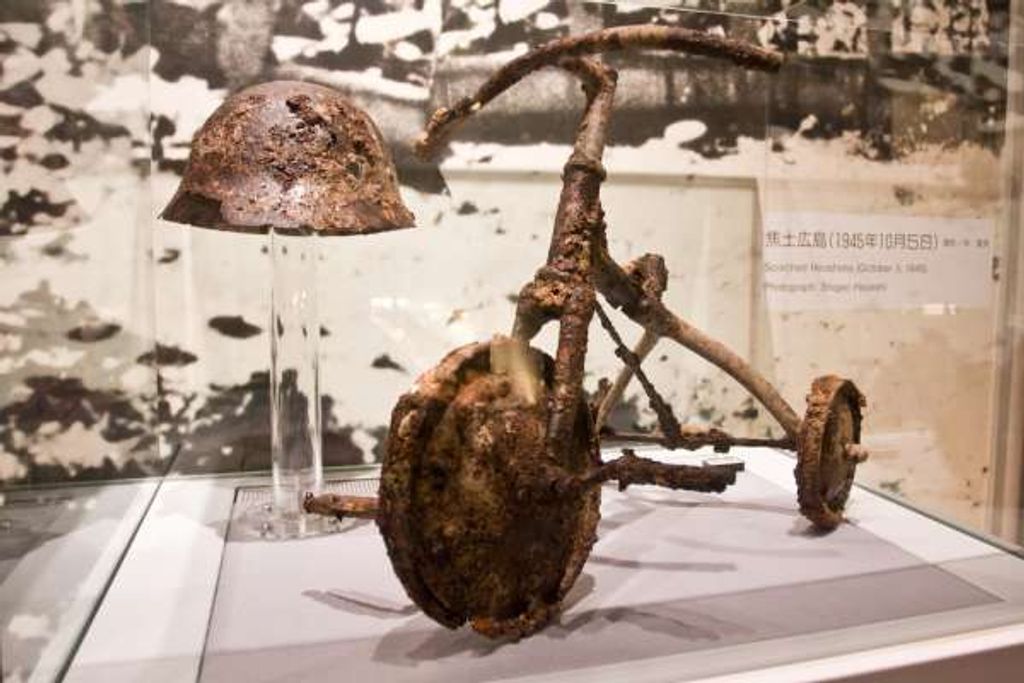 Along with the Atomic Bomb Dome, this is a place for learning about the atomic bombing. Starting merely four years after the atomic bombing, materials related to the damage and suffering caused by the atomic bomb had been exhibited since 1949. Then in 1955, the Hiroshima Peace Memorial Museum was opened. This museum conveys the conditions at the time of the bombing by a wide range of display including explanations of the structure and destructive power of the atomic bomb, explanations of radioactivity, heat rays, the blast, and damages caused by fire, as well as an exhibition of the belongings of the victims. Even visitors of generations with no war experience are certain to receive an intense impact from the exhibited items which include valuable evidences such as a scorched lunch box, a burnt uniform, stone steps marked with a person’s shadow created by the heat rays, and traces of black rain. Visitors are allowed to touch the exhibited heat ray-damaged roof tiles which were melt and rendered into a bubbly form by the massive heat.

Videos of more than 300 victims speaking of their experiences can be viewed at any time. Furthermore, audio guides in 17 languages and pamphlets in 9 languages are available. An exhibition of “Hiroshima’s History in Light of the Atomic Bombing” is displayed at the East Building in which historical facts of Hiroshima from the times before and after the bombing are introduced. The belongings and pictures of victims are exhibited at the Main Building. The museum shop is also located in the Main Building. 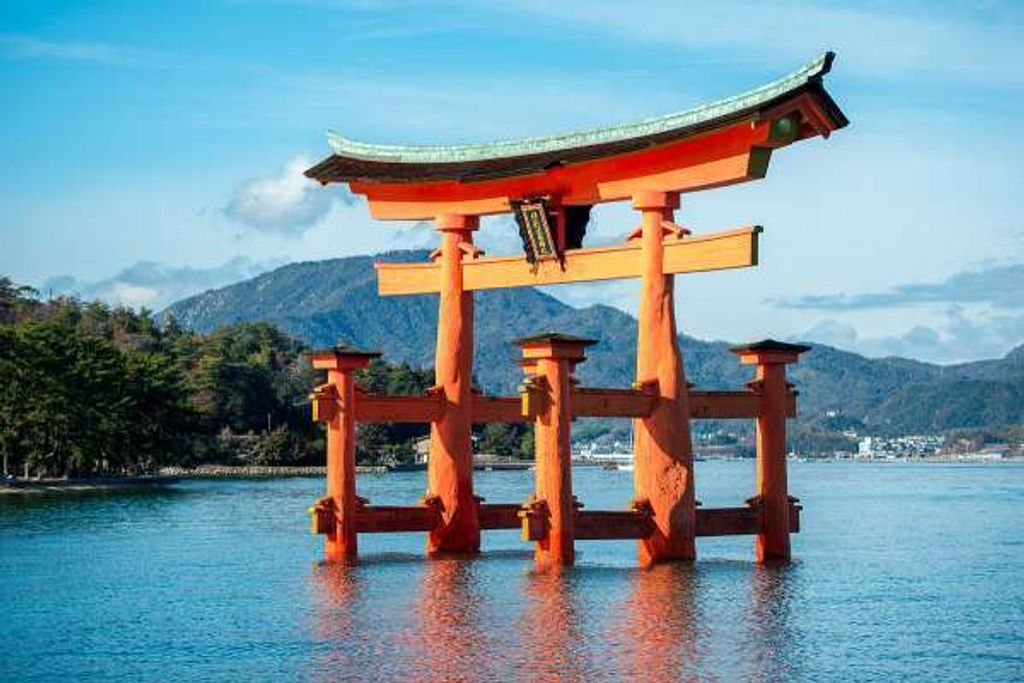 Itsukushima Shrine is constructed in the architectural style of the Heian period (794 – 1185); it is a unique building which likens the Seto Inland Sea to a pond. This grandeur, red lacquer-coated shrine blends natural and man-made beauty in perfect harmony; the view completely changes during high tide when the shrine and corridors appear as though they are floating in the sea. The entire island is considered as a holy object in which a deity resides; in the front of the holy island is Seto Inland Sea and in the background is Mount Misen where the gods descend. Itsukushima embodies the form of the ancient Japanese Shinto worship in which people found gods in nature and worshipped mountains, oceans as well as natural phenomena. For this reason, it has been listed as a World Cultural Heritage site. The Island can be accessed by a 10-minute ride on a ferry leaving from the JR Miyajimaguchi Station and arriving at the Miyajima Sanbashiguchi. It is a 15-minute walk from here to Itsukushima shrine. You will be walking through the Omotesando shopping avenue which is filled with souvenir shops and restaurants. While walking through this avenue, we recommend checking out the world’s largest wooden scoop on display. We also recommend munching on Hiroshima’s famous grilled oysters or maple shaped steamed sweet buns. The highlights of Itsukushima shrine include the 60t, 16m high grand torii gate, the 275m long corridor, and the delicate yet extravagant main sanctuary.

Mount Misen is another spot you don’t want to miss. The cable car stop “Koyodani Station” is a 15-minute walk from Itsukushima shrine. When heading to this station, you will be walking through the Koyodani Park where you can enjoy cherry blossoms in spring, tender new leaves in summer, and colored leaves in autumn. Especially, the park’s approximately 200 maple trees display a spectacular view of vibrant colors in November. Enjoy a “walk in the sky” on the cable car while looking down at the magnificent views of the Seto Inland Sea and virgin forests. The final stop is Shishi-iwa Station from which you can walk to the Shishi-iwa Observation Deck and then onto the Seikado building of the Daishoin temple that houses the “ever burning fire” which is said to have been burning for 1,200 years. After that, walk through the tunnel of the enormous Kuguri-iwa rock to get to the best highlight of the mountain, the Mount Misen Observation Deck. It is located at the mountain peak from which you can enjoy a panoramic view of the islands dotting the Seto Inland Sea. Before leaving the island, we recommend watching the sun set into the sea at Miyajima’s sunset spot Mikasa-no-hama. Enjoy the magical view of the grand torii gate “floating” in the sea, lit up by the setting sun.