Do you like sand? Then take a trip to Tottori! 100,000 year old sand dunes, and the biggest area like it in Japan is certain to impress. Tottori also boasts the third highest peak in Japan, only Mount Fuji and Yarigatake beat it on height. So, want to really escape from the city, then Tottori is the perfect destination to visit: 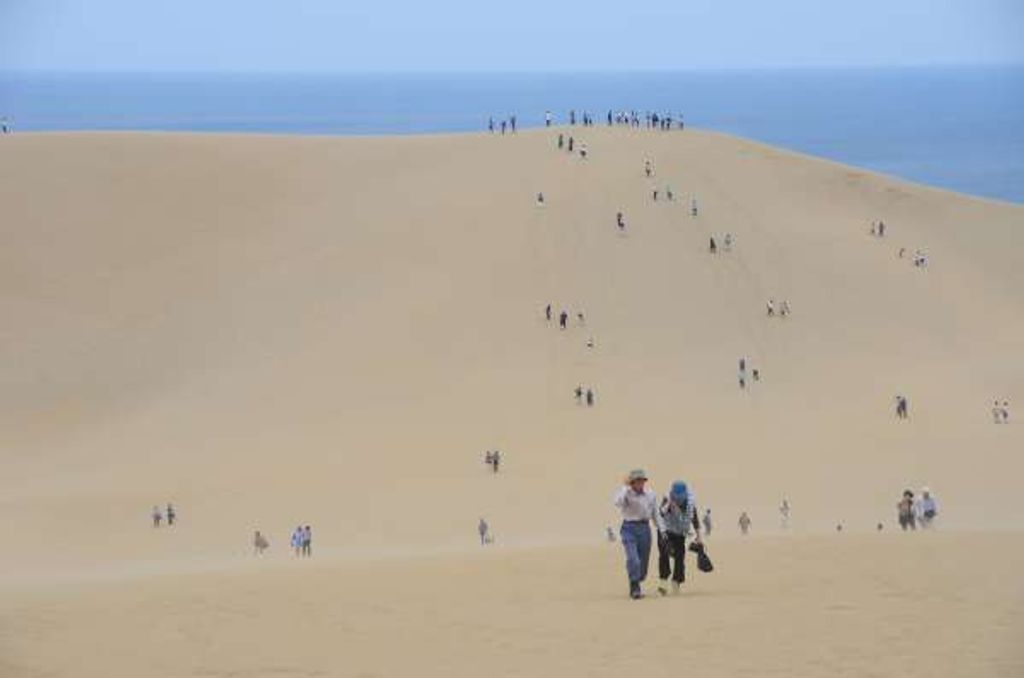 The Tottori Sand Dunes are a nature spot that represents Tottori Prefecture. Nationally designated as a Natural Monument, the sand dunes which were selected as one of Japan’s Top 100 Geological Features boast an east-west width of 16km and a distance that spans 2.4km from north to south. You could imagine it as a flat sand field but it is unexpectedly rugged. The slightly elevated hill known as The Horse’s Back which can be seen at the front has a height of 40m. The contrast of the white sand seen from the peak and the blue ocean is wonderful and it’s well worth the climb. The ponds known as suribachi are also a special part of the dunes. There were once over 30 of these ponds in the past but currently there are only 10. The largest suribachi is Origo Suribachi and it appears as a volcanic crater with a depth of 40m.  Standing on the sparsely populated dunes in the wind-swept early morning, you will find ripple-like patterns known as fuumon. It makes for valuable scenery that couldn’t be viewed unless various conditions were met.

There are nothing but activities with a difference on the sand dunes. There is not only camel sightseeing that is rare even in Japan but also walking around the area. First-timers are also welcome to try paragliding. You can enjoy as many things as you like without coming across any obstacles of wood or stone on the dunes. Sandboarding, which is popular worldwide, is a sport where you can slide down the sand just like snowboarding. You can enjoy it in many ways whether you are a beginner or an advanced participant. Sand yoga is something that can only be done here. The power of land, sky and sea can be felt with the whole body whether you are basking in the morning sun, viewing the sunset or just being under the starry sky and full moon. 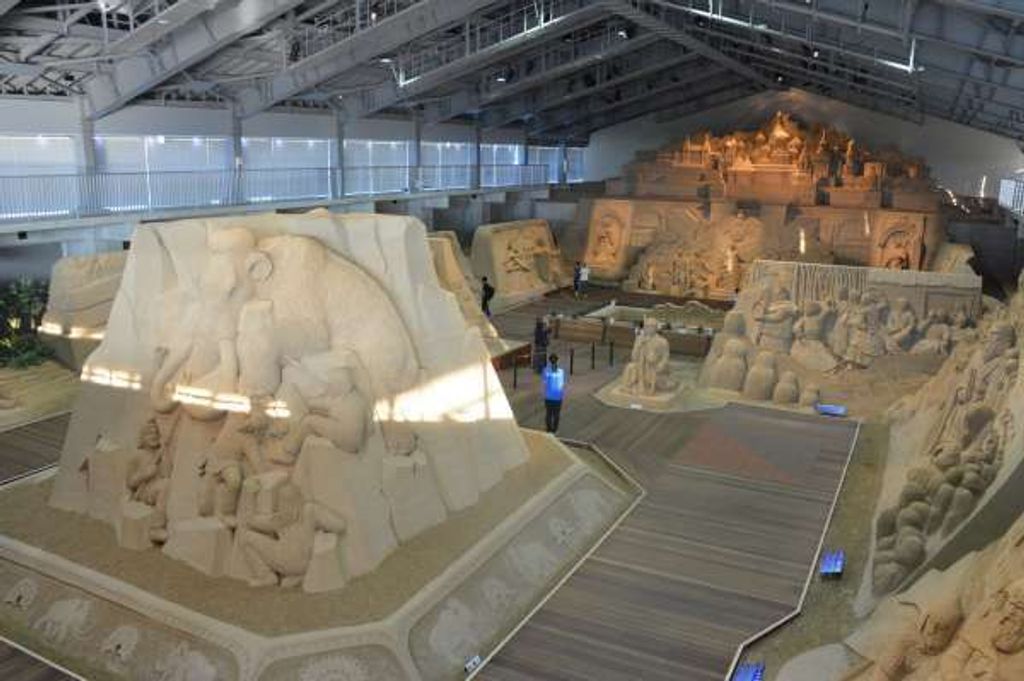 The indoor facility for this museum of art located at the Tottori Sand Dunes was first opened in 2012, and over the years, the themes have changed annually with the exhibition period being from April to the following year’s January in an average year. The sand sculptor and producer is Katsuhiko Chaen who was selected as one of “The 100 Japanese People Respected by the World”. Every year, sand sculptors are invited from all over the world to display their world-class works. The attraction undoubtedly lies in the high level of artistic skill carefully carved into the finest detail within these massive works of art. Within a space that is as huge as a gymnasium, some of the sand sculptures soar above the 2nd-floor sightseeing passage, and they are incredible for their delicacy and dynamic design. The carving techniques for the statues involve lumps of sand that have only been hardened by water. Since the ingredient is sand, there is always the danger of collapse right from during construction to after completion so one of the charms is the beauty that is within that transience. After sunset, the facility is illuminated so you can get a view of the sculptures that differs from the daytime. In 2014, 3D projection mapping was initiated so that from twilight and into the evening, the spectacular sand sculptures even just under normal lighting along with the images and sounds create a magical atmosphere. 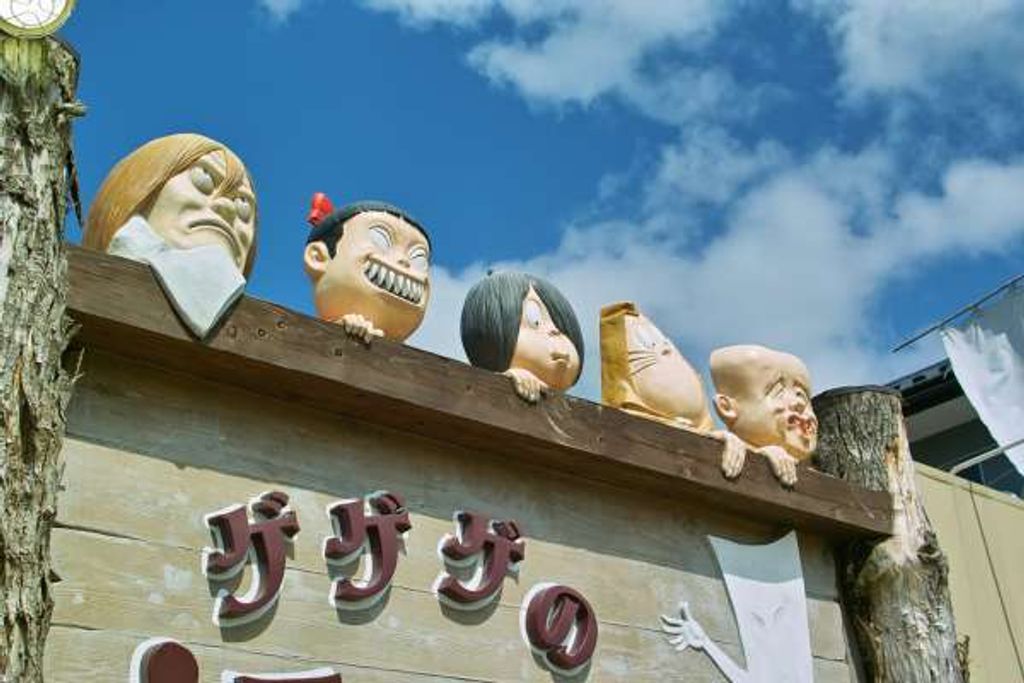 “Ge Ge Ge no Kitaro” is one of the representative examples of manga. A story of the hero Kitaro who battles evil demons, it began in 1954 as a picture-story show before being adapted into various forms such as a manga, an anime, and a movie during a period of over 50 years. After arriving at Sakaiminato Station, first purchase your Yokai Guidebook. Each of the 153 yokai characters on Mizuki Shigeru Road will be listed with their photos and descriptions. There are pasteboards available for the stamp rally, and when you get stamps for 37 of the yokai, you will receive a Certificate of Completion. Each of the bronze statues of the yokai has a bar code which when read by your cellphone will provide detailed information on that yokai. Yokai Shrine which is located in the center of the shopping district was built in 2000. Wash your hands before prayer at Medama Oyaji Fountain where the character of Medama Oyaji (Eyeball Father) spins around from the force of the water spurting out. The omikuji fortune slips brought out by mechanical doll yokai are also fun. At the very back of the shopping district is Mizuki Shigeru Museum. Mizuki’s manga are introduced to you all at once which you can enjoy to your heart’s content. If you want to catch your breath, there is the Kappa (Water Sprite) Fountain at Yokai Plaza. Just watching the yokai being at home is relaxing, and on Sundays, there are picture show performances held in front of the fountain.

All of the 16 stations of the JR Sakai Line have signs and station names such as Kitaro Station and Nezumi Otoko Station, named after the characters of “Ge Ge Ge no Kitaro”. And there are 6 kinds of Kitaro trains running. The ferry running between Sakaiminato and Okinoshima Island is called the Kitaro Ferry with 14 bronze statues of yokai placed on the island. Also, Yonago Airport has also been dubbed Yonago Kitaro Airport so the world of yokai has been steadily expanding. 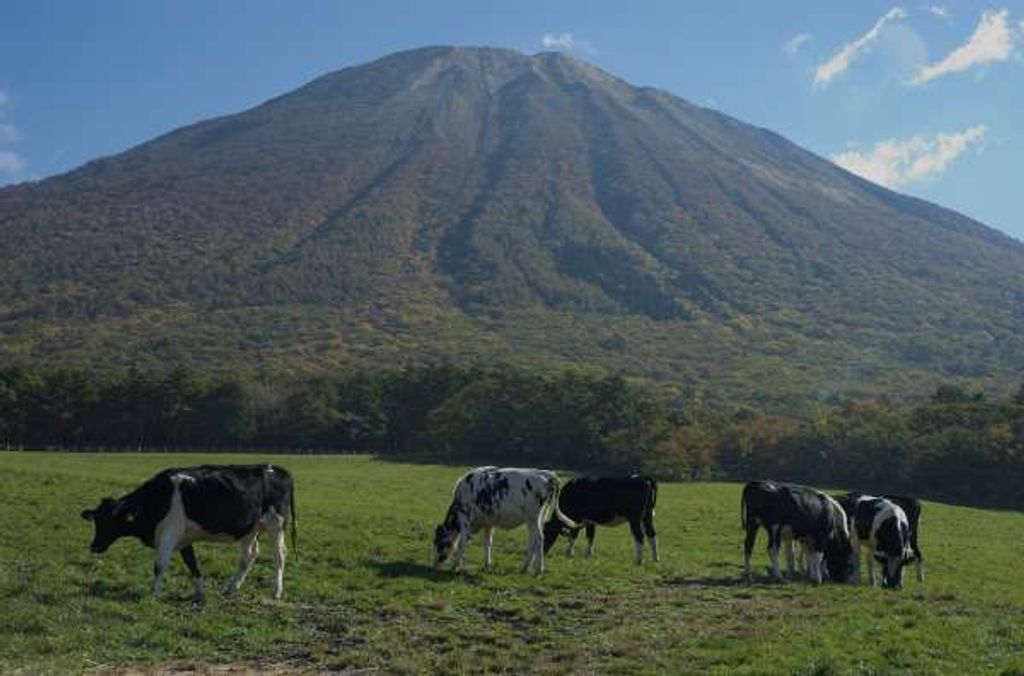 Daisen, which ranks No. 3 among Japan’s famous peaks after Mt. Fuji and Yarigatake, sits alongside the Tottori Sand Dunes and is one of the representative natural heritage sites for Tottori Prefecture. An attractive mountain which has a variety of expressions depending on where you view it, seeing it from the west is exceptional. Also known as Houki-Fuji, it has the gentle slopes and grand scenery reminiscent of Mt. Fuji. The view of Daisen from the northern end of Daisen Town is called Kitakabe (Northern Wall), and it has the characteristic of a sheer rock face that measures 400m high and 2km in length. It differs from the more feminine appearance of the west side and it has a masculine rough-hewn mountain valley. The best view is at Daisen Ski Resort. The large looming cliff there is an overwhelming sight. In addition, the view of the mountain from Koufu Town to the south is known as Minamikabe (Southern Wall). As with Kitakabe, Minamikabe has precipitous folds and the harmony among the bare rock face, the fresh leaves and then the autumn colors is lovely no matter how you say it.

At the Daisen Horseriding Center, you can easily try horseback riding. There are a variety of plans through real courses ranging from riding within the corral to horse trekking on mountain trails. There is also Mountain Stream Kishimoto, the only place on Daisen where you can enjoy mountain stream activities. Daisen is also known as a famous place for water, and the water’s clarity is dazzling as it flows over the rocks. The singular coldness of the mountain spring water and the beauty of the fresh leaves are just like gifts from Mother Nature. Daisen Farm Milk-no-Sato is a very popular farm in Daisen which boasts an openness that is just like the great plains of the Alps. There, you can also make a reservation to try making foods such as ice cream and butter at the Milk Workshop.

Plan your trip to Mount Fuji