Hidden away at the southern tip of Kyushu sits Kagoshima. A capital city with a beautiful bay, and with most of the prefecture surrounded by ocean, Kagoshima makes a great place to escape and relax during your trip to Japan. The highlight is the view of Sakurajima, a stunning volcano that sits in the middle of the bay: 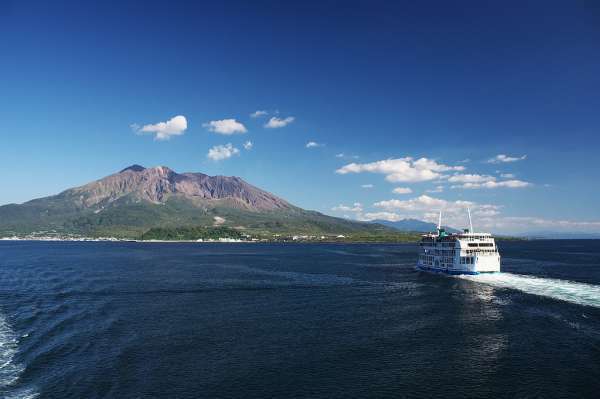 Kagoshima’s symbolic Sakurajima is an active volcano on Kinko Bay that stands 1,117m, has an area of 80km² and a circumference of 52km. Since its formation approximately 26,000 years ago, there have been 17 major eruptions and even now, small-scale eruptions continue to occur daily. About 4600 people currently live within the vicinity, and the appearance of smoke coming out of Sakurajima also attracts a lot of tourists. The one-way ferry ride from Kagoshima City takes 15 minutes, and ferries, which can also take on vehicles, depart from port every 15 to 30 minutes. Since smoke is still coming out of the volcano, it is prohibited to enter the 2km zone around the 2 calderas, and the highest point that tourists can enter is limited to the 4th stage of the northern peak known as the Yunohira Observation Deck.

The Yunohira observation deck is face-to-face with the mountain surface of Sakurajima, and it is famous as a scenic viewing spot where you can see Kinko Bay and the city of Kagoshima down below. At the Sakurajima Visitor Center which provides commentary on the eruption history and mechanisms, there are videos which are subtitled in English, Chinese and Korean. With advance reservations, you can also participate in kayaking and guided walks. At Sakurajima Lava Nagisa Park, you can take a break at a 100m-long foot bath using a natural hot spring while viewing Sakurajima. The Kurokami Buried Torii Gate is the place where the gate of the Haragosha Shrine was buried in ash over a period of 1 day during the major eruption of 1914. It has remained in that state and is a reminder of the tragedy of that eruption. You can move around within Sakurajima by city bus or tour bus, but for an efficient tour, the Sakurajima Island View (sightseeing bus) is convenient. There are 8 buses per day and one trip takes about an hour with stops at roadside stations, the visitor center, the Torishima Viewpoint, the Akamizu Observation Plaza which has a commemorative plaque for singer Tsuyoshi Nagabuchi, and Yunohira Observation Deck. 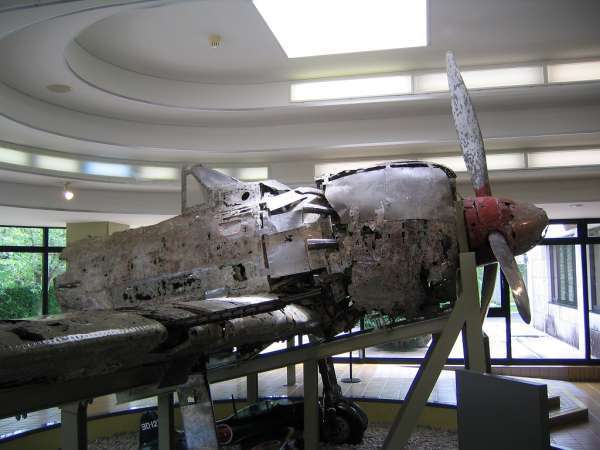 Articles and related documents of the Imperial Army’s kamikaze pilots are on display. These pilots attacked by flying their bomb-rigged planes into enemy ships in engagements such as the Battle of Okinawa during World War II that had never been  seen in human history. Because Chiran was the launching base, the possessions, records and the appearance of the dead kamikaze pilots from those days have been left behind, and a request for lasting peace was created.

When Japan’s ally, Germany, surrendered in 1945, the Allies turned their forces on Japan only, and the whole nation underwent a harder fight as the Japanese government considered Okinawa to be the front line for the homeland. As a result, to protect this front line, kamikaze attacks were used. It was a battle in which pilots would not come back alive as 250kg bombs were attached to their fighter planes to strike and sink enemy ships. The kamikaze squads were amassed from all over Japan, and over a thousand pilots gave their lives. Within the exhibits, introductions of several of the pilots’ families and their stories, actual letters to the families and other items are on display. The fighter planes of those days and the remains of planes recovered from the ocean are also displayed so that the miserable battlefield from that time can be glimpsed. Also, the barracks where the kamikaze pilots had been berthed have also been restored and are on display. In the museum, audio guides in English, Chinese and Korean can be rented so that visitors can learn in detail about the pilots’ stories and their planes. 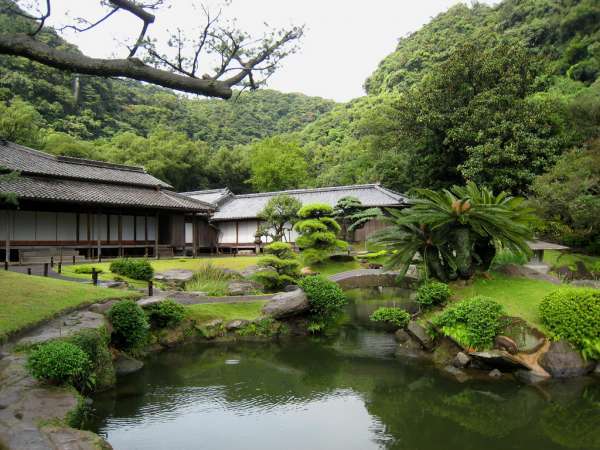 In 1658, a villa was established by the Shimazu clan who ruled over the Satsuma domain. Boasting a huge area of 50,000㎡, it incorporated the famous areas of Kagoshima, Kinko Bay and the volcanic Sakurajima, into the background so that the enjoyment of this sublime scenery in harmony with Mother Nature was the villa’s prime attraction, and it was designated as a National Place of Scenic Beauty. There are many strangely-shaped rocks within the garden, and it is because they resembled the mountain rocks (sengan) of China’s Mt. Longhu that the garden was given its name. The garden is said to be deeply imbued with Chinese culture that is reminiscent of Satsuma, known as the southern entrance to Japan, and the flora is quite unusual reflecting its location on the boundary of the temperate and subtropical zones. From the Edo Era to the contemporary age, it has served as a guest house for VIPs for the Satsuma domain and Kagoshima Prefecture, and numerous important people have visited from Japan and overseas.

The inside of the garden and the adjacent area became Japan’s first industrial area and the site of the former Shuseikan, and it was also known as the source of modern Japan’s technological and industrial might. In the guided tour that explains the historic sites within the garden and the history of the Shimazu clan, there are staff who can speak Chinese and English. Also, the admission into the garden includes a tour of Shoko Shuseikan Museum which introduces the history of the Shimazu clan and the business of the Western-style industrial complex. Models of air furnaces and Ryukyuan ships based on photographs, blueprints and excavations, and a display area showing the atmosphere of those days of construction are highlights. 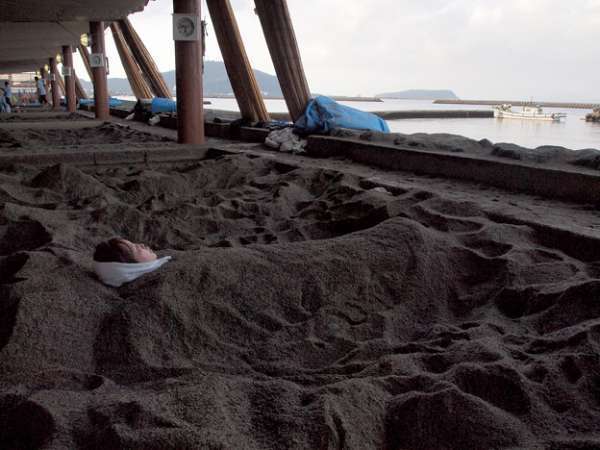 For the sand bath, a natural hot spring flows underground toward the shore and the sand there is heated to be utilized for the bath. Ibusuki’s sand bath panacea has been in use for about 300 years, and its effects have been said to be 3-4 times that of a regular onsen, promoting blood circulation and eliminating waste products and inflammatory materials. Also Ibusuki’s salt springs have the effects of suppressing inflammation and elevating skin renewal.

Receive your yukata and towel for the sand bath at the entrance, change into the yukata in the men’s or women’s change rooms, and enter the outdoor sand baths without forgetting to bring your small towel along with your camera or smartphone. At Saraku, there are 2 sand bath areas which you can choose from: the all-weather semi-outdoor facility with a roof and the beach where the waves lap onto the shore. Once you wrap the towel around your head, lie on the warm sand so that the staffer can pour the sand onto you with a shovel. Your body will gradually warm up inside the sand so that you can enjoy a natural sauna. It’s recommended that you lie in the sand for about 10 minutes since a prolonged time might make you ill. Place your camera or smartphone nearby beforehand since a staffer will offer to take a picture of you while you are in the sand. After enjoying the sand bath, you can enjoy a leisurely soak at the indoor hot spring facility within the ancient waters of the deep underground area known as the “fossil seawater” that make up the fountainhead for the salt springs. Please take note that weeknights and weekends are crowded and that the baths cannot be entered during high tide. Since there are many pickup buses from the Ibusuki ryokan, it’s good to check at your accommodations.

“ Expert knowledge for a tour of Northern and Souhern Okinawa ”

I'd already spent a couple of days touring Okinawa, but I knew there were many other things that I'd missed, also the poor english language skills of my other guides meant I missed a lot of information about the places I'd seen previously. With Tateo's help I was able to see Kadena Air Base where luckily we saw some Military aircraft taking off, The American Village and the Navy Underground tun...
read more

“ An awesome day experiencing the Sakura season in Okinawa ”

Mr Tateo has excellent knowledge of the areas and his explanation was clear and insightful. He took great effort to plan for our trip to experience the Sakura season in Okinawa. Despite the long travelling time to Motobu, he guided us to selected places and shared its unique features in Okinawa such as the American Village. This made the travelling less taxing. Not to forget a delicious lunch o...
read more

“ Tateo met us at the pier. Although we missed each other inside the pier, we were able to call him and he vame to meet us. Woukd prefer if he uses whatsapp to communicate lically. ”

Continue from above. Once we met him, the trip went smoothly as planned. He consulted us. He provided local information, took us to tge sites, helped us with ticket purchase, loan us umbrellas, gave us a snack etc. The trip was very enjoyable even though there was a period of pouring rain. Tateo was courteous and his English is good. The trip was as planned and as scheduled.
read more

Tateo was well prepared and very friendly. We were late getting off the cruise ship but he waited patiently for us at the port. I would recommend Tateo to anyone who wants to have a well guided tour in Okinawa.
read more

Our family of 10 persons had a great time exploring Okinawa with Tateo. Tateo was able to maximize our time and adjust our itinerary to see additional sights. This tour was better than any options offered by our cruise ship. We highly recommend Tateo!
read more

Noriko was experienced, patient, and caring. We enjoyed our time touring around Shuri Castle and Makishi market. Noriko shared a lot of knowledge about Ryukyu with us. Thanks Noriko for the great service. We liked it.
read more

“ One day tour in Okinawa ”

Tateo San deserves a 5+ stars. He is a very knowledgeable and wonderful tour guide. He took us to all the sites we wanted to see during our short stay. We enjoyed the time there. Thank you so much!
read more

Tateo is very personable and was so attentive to my husband and I. He really listened to all of our requests. He has a great personaliza, an excellent driver and is so knowledgeable. We had a comprehensive introduction to Okinawa culture and history. We all had a fun time together. We would recommend him as a guide to anyone visiting Okinawa without reservation!
read more