Planning a trip to Japan? In the middle of the country surrounded by mountains and the Northern Alps sits Toyama. A sightseeing destination filled with natural scenery and beautiful nature. Walls made from snow, cable cars, train tracks that cross vast gorges, and hiking trails, make Toyama an excellent sightseeing destination: 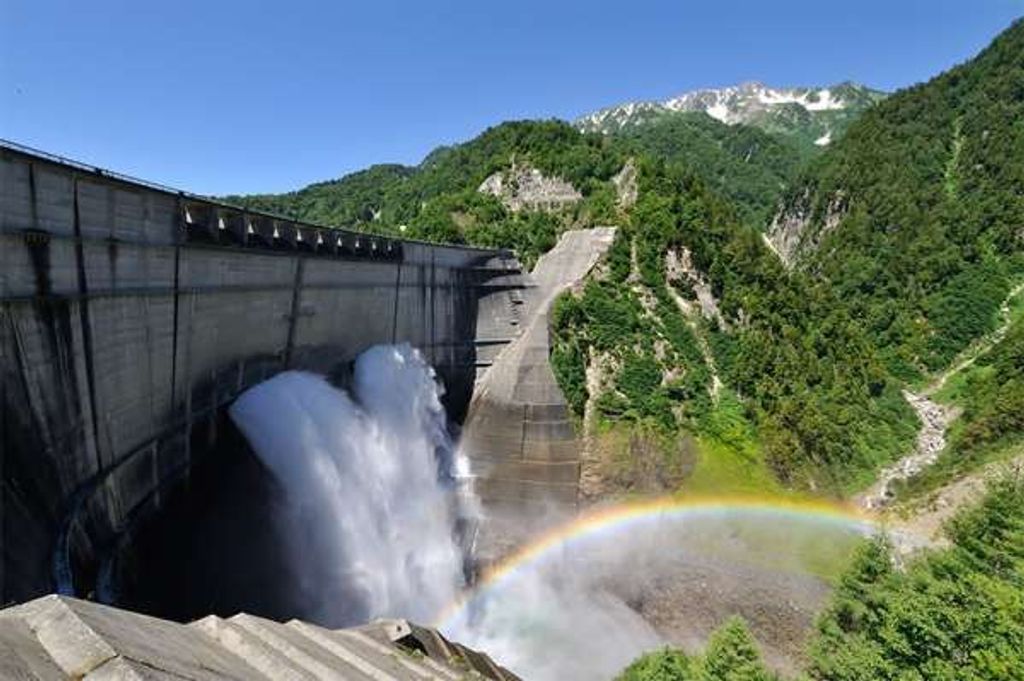 Surrounded by the mountains of the Northern Alps, Kurobe Dam provides 1 billion kWh worth of electricity annually from the enormous amounts of water. At the time of the commencement of its construction in 1956, the project cost a whopping 51.3 billion yen and about 10 million workers were utilized for the 7-year project. The dam has a height of 186m which is the tallest in Japan, and total reservoir capacity is an estimated 200 million cubic meters, which is equivalent to 1000 large oil tankers. Its location within Chubu Sangaku National Park which boasts one of Japan’s most beautiful scenes has made the dam a famous tourist site visited by many people as one of the highlights along the Tateyama Kurobe Alpine Route, and especially between June 26th and October 15th, great amounts of water are discharged from the dam on a daily basis with the rising mist and the tremendous force of water falling down being something that cannot be missed. Mother Nature and this man-made structure create a spectacular landscape.

There are superb observation points to enjoy the grandly arching dam and the scene of gushing water. From the Dam Observation Point at the top of a 220-step stairway, you can get a bird’s-eye view of the dam from a high point. On the other hand, from the New Observation Point, you can view the dam and the spectacular gushing water in front of your eyes from a distance. After touring the dam, you will also want to enjoy the surrounding nature. At the man-made Kurobe Lake which was created from the dam, the Kurobe excursion ship, Garube, is in operation where you can enjoy Japan’s highest excursion cruise. Also, along the shores of the lake, there are places of interest such as a monument to those workers who lost their lives in the construction of the dam, the Kanpa Valley Bridge, a primeval beech forest and the giant trees of Kurobe that are 800 to 1000 years old which can all be accessed through a natural trail that can be walked in about 1 hour, so that you can fully enjoy the lush nature of Kurobe Dam that shows its beauty through all four seasons. 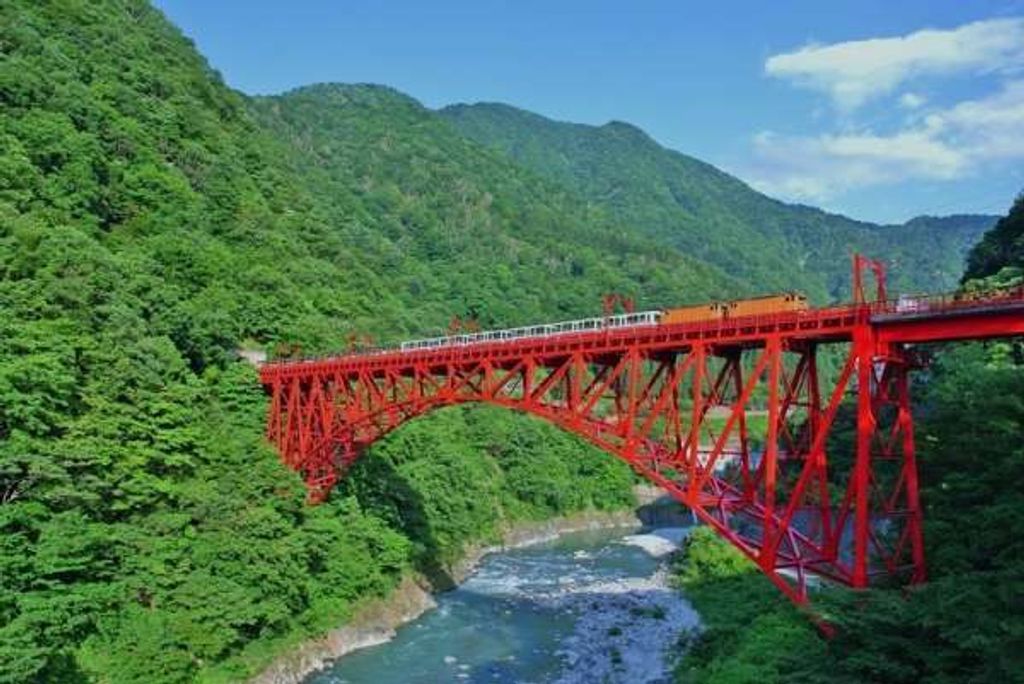 Kurobe Gorge, which is located within Chubu Sangaku National Park, has been eroded into a deep V-shape by the actions of the Kurobe River that flows between the Tateyama Mountains and the Ushiro Tateyama Mountains, and the landscape that has been created from the incline is lovely. Across the overhead bridge that spans the deep valley run the trolley trains. Called the “Kurotetsu”, this is the Kurobe Gorge Railway that has amassed many train fans. The 80-minute ride starts from Unazuki Station and travels for 20km to Keyakidaira Station, and although it is a short run, you can enjoy a grand panorama expanding out in front of your eyes in the middle of remote nature that has remained unchanged.

At the starting station of Unazuki, the area is also famous as an onsen village while at Kuronagi Station, there are dynamic cliffs and an observation point where you can see perpetual snow. Then, there is Kanetsuri Station which is famous for the open-air hot spring known as Kawara Onsen and finally there is the terminus of Keyakidaira where a visitor’s center is located and is ideal for leisure with various trekking courses and many onsen. The aforementioned Kawahara Onsen and Keyakidaira Station’s Babadani Onsen are popular for allowing bathers to create their own onsen by digging through the river bed so that hot water springs up.

Straddling Toyama and Nagano Prefectures, the Northern Alps at 3000m soar high into the sky. And the traffic route that joins Tateyama Town in Toyama and Omachi City in Nagano is called the Tateyama Kurobe Alpine Route. The route is included within Chubu Sangaku National Park and has become an internationally famous mountain sightseeing route which has plenty of sights to see such as the picturesque scenic area of Kurobe Dam and the Yuki-no-Otani snow corridor in winter.

The Tateyama cable car which goes from Tateyama Station to Bijodaira Station over 1.3km climbs 500m, and you can enjoy the changing forest scenery from the ground into the mountains. Also, on the Tateyama Ropeway which links Daikanbo and Kurobedaira, the scenery and the environment have been taken into consideration as there are no pillars along the way so that you have a grand panoramic view of 360 degrees. As well, there are distinct transportation routes that you can enjoy such as the Kurobe cable car which runs underground at a maximum incline of 31 degrees for 400m, the Tateyama Kogen buses which use green diesel and hybrid vehicles, and the electrically-operated Tateyama Tunnel Trolley Bus.

There are various walking trails that show off the beautiful landscape such as the Bijodaira Trail which has been selected as one of the Top 100 Forests for Therapy, the Mikurigaike Pond Course which goes around an azure pond formed from a volcanic eruption, the Midagahara Trail which has been registered in the international treaty of the Ramsar Convention for its wetlands conservation, and the Barrier-Free Course which allows for the natural scenery to be enjoyed by wheelchair. During a climb up the mountains, try reaching the peak of Mt. Tateyama itself since it is an object of mountain worship. At Oyama Shrine at the 3003m top, you can undergo a purification ceremony.

Located along the Tateyama Kurobe Alpine Route at an altitude of 2450m, the highest point of Murodo is a lively area as a tourist spot for activities such as trekking and mountain climbing in summer. However during winter, this area is known worldwide as a prominent place for heavy snowfall. Close to Murodo, Otani has an extremely heavy snowfall which can exceed 20m. Yuki-no-Otani (Grand Snow Valley), a famous place in winter along the Tateyama Kurobe Alpine Route, is a part of the route which has to be dug out so that vehicles can pass. Both sides of the route are represented by huge snow walls with a height of 20m and the passage continues for 500m. Work to create the passage is difficult, and roads inundated by the tremendous amounts of snow are slowly dug out by bulldozers while searched out by GPS. It is for this reason that many people visit to get a glimpse of this scenery that only exists in winter. In this area that has been designated as a Special Natural Monument with its many animals, as the seasons change, you can also see the precious sight of grouse in winter which have wings as white as the snow itself.

As the season of closed-off roads due to heavy snow ends, the Yuki-no-Otani event known as the Otani Walk in which you can walk across the valley is held between mid-April and mid-June when all alpine routes are open. During the lush green season going from spring to summer on the ground, you can enjoy a silvery world in this area. When you receive your certificate of passage at Murodo Terminal (Central Plaza), you walk ahead 100m to reach the entrance into Yuki-no-Otani. This is the beginning of the world of snow walls which soar into the sky. At the same time, there is the gigantic Snow Maze in May, the Snow Slide on which you can enjoy sleighing in June, and other fun snow events for kids and adults alike which bring many tourists.

Plan your trip to Nagano