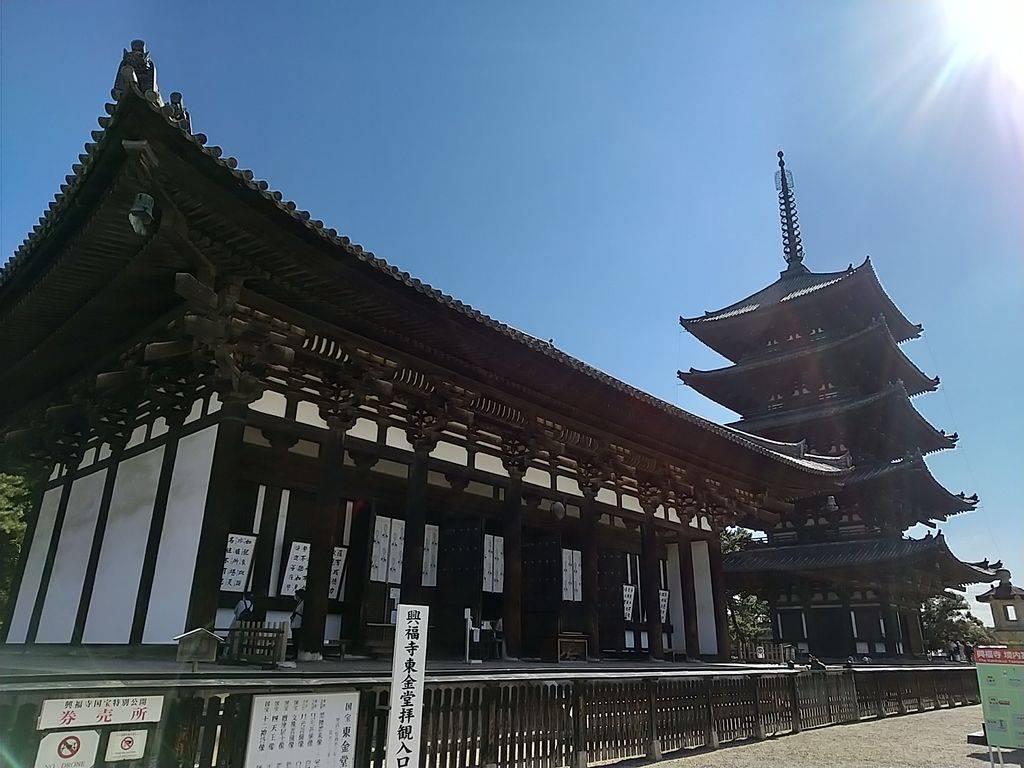 It is said that there were more than 175 sub temples during its peak period.  In the 12th century, however, Kofukuji Temple was set afire and completely burned down. There are no original buildings since its construction. Now, you can see many buildings reconstructed in the large precinct. 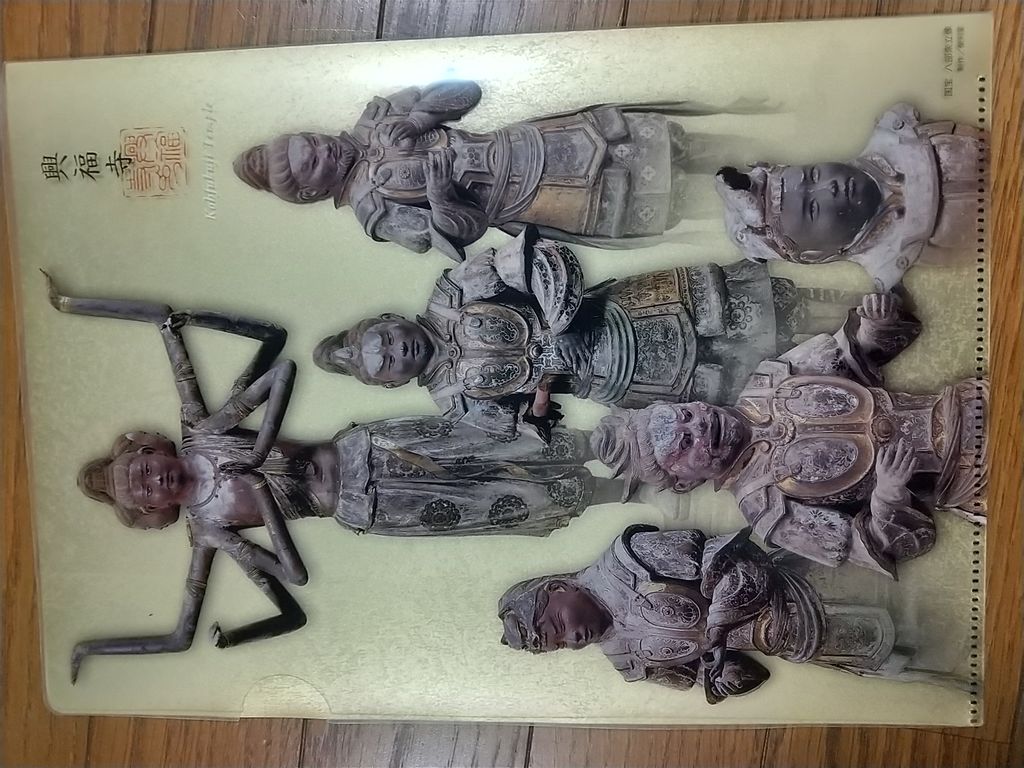 At the National Treasure Hall, you can see many National Treasures such as Buddhist images, paintings, historical documents and so on. The most famous dry-lacquer sculpture, 'Ashura' will welcome you at the hall. Many visitors including elementary school students come to see him every day. (They visit here on their school excursion or social studies' class.)

You can see many historical relics such as 'Ashura' at the Treasure Hall, however, not all the things of the temple can be seen all the time. In Japan, at most of the temples, the doors of many sangharamas (buildings) are closed all the time and opened to public only during the limited period in spring or autumn. 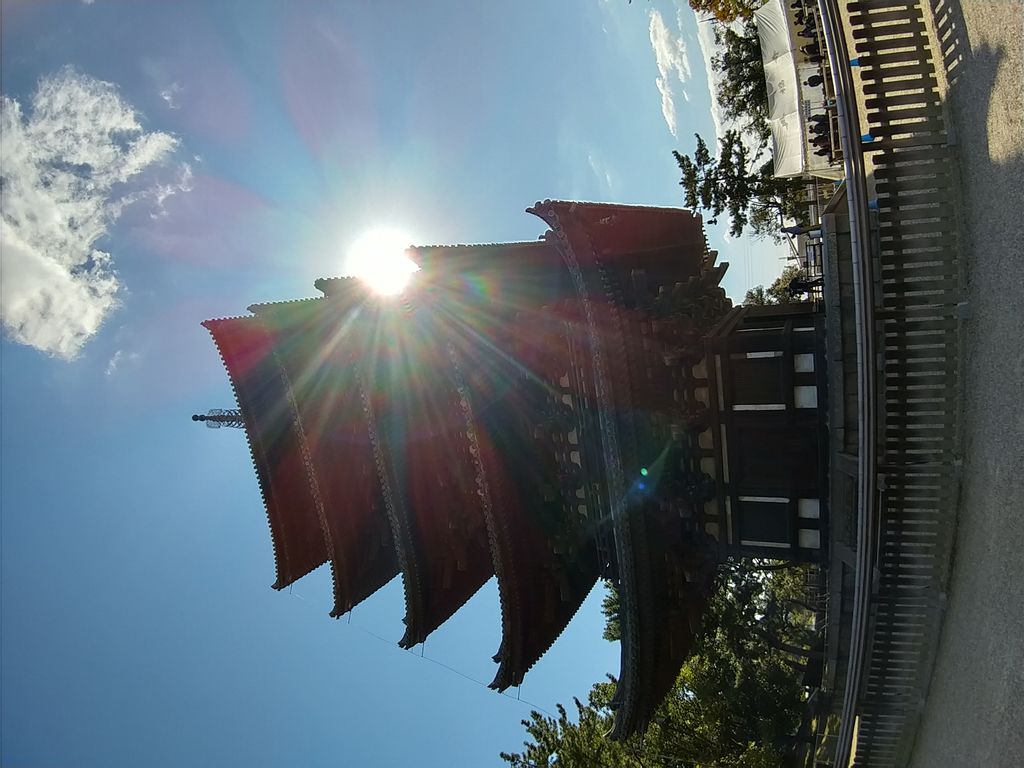 Among the several buildings of Kofukuji Temple, Five Storied Pagoda, 50 meters high (second highest pagoda after Toji Temple in Kyoto), is a landmark of Nara. It was first built in the 8th century, however, has been burned down five times. The present pagoda, the 5th building was reconstructed in the 15th century.

At the end of the 19th century after Tokugawa Shogunate was overthrowned, due to 'anti-Buddhist movement' (movement to abolish Buddhism), many temples were destroyed or became extinct. The pagoda is said to have been for sale at only 250 yen, the price of that time. The buyer is said to have tried to burn the tower and take only its metal parts away from the pagoda. It was lucky for the pagoda that people living nearby were against the plan worrying about fire spreading. The pagoda was saved on the verge of dismantling. 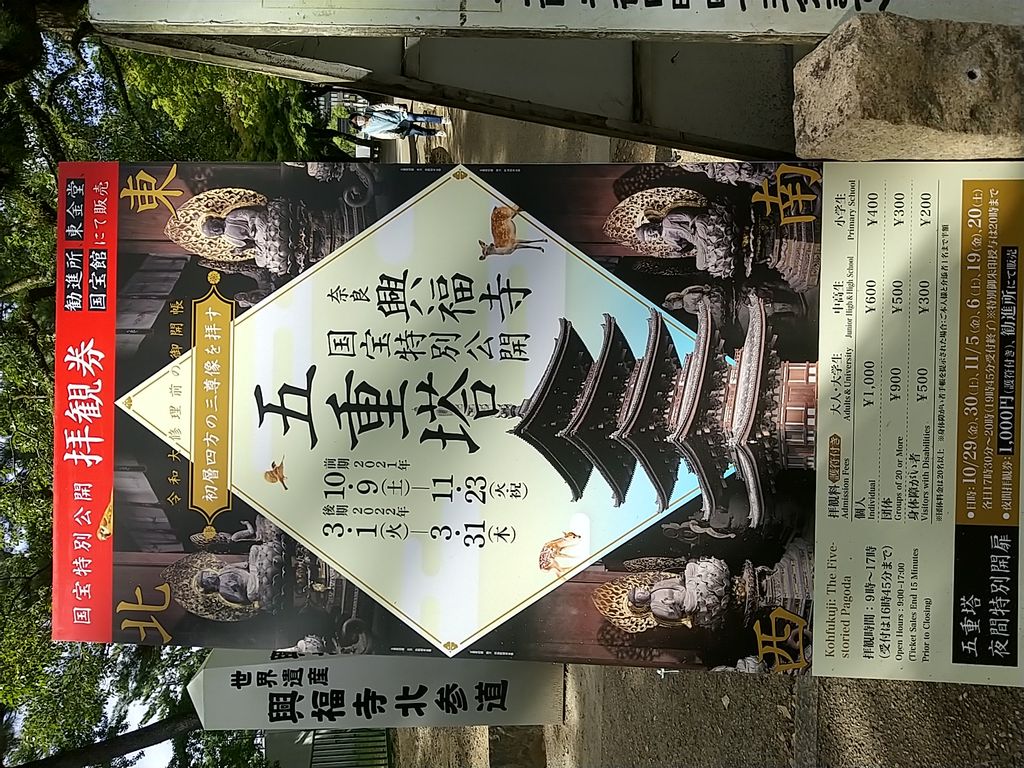 The five storied pagoda is being opened to public now (autumn 2021) before its major repair which will be started next year.

Inside of the pagoda, you can see four Buddhist statues with their flanking images in four directions of north, south, east and west. In the center of the pagoda, the thick central pillar penetrates to the 5th floor in the open-ceiling space.

*There are many five or three storied pagoda at temples all over Japan. Some of them have statues made of clay concerning Buddha's life such as at Yakushiji Temple, Horyuji Temple (both of them are in Nara) and so on, and others have Buddhist statues such as at Kofukuji Temple, Toji Temple (in Kyoto), Hokanji Temple (Yasaka-no-tou in Kyoto) and so on. Please refer to my another blog, 'Yasaka-no-tou (Yasaka Pagoda) if you are interested. Most of the pagodas open their doors for visitors during the limited time.  If you are interested, please check the official website of each temple.

Waiting for you in Kyoto!

Vacation in Ishigakijima Island in Okinawa

(Kabira Bay where we can enjoy riding on a glass boat and seeing lots of fish through the glass.)   Have you ever heard of 'Okinawa' in Japan?  O...

(borrowed from the document folder which I bought at the official shop at Murouji Temple) As I wrote in my another blog, 'Nyoirin Kannon (Bodhisatt...

Kyoto had been the capital of Japan for 1000 years and has many wonderful places to visit. Please choose a few places among the following sightseeing spots, as you like. If you have any other preferable spots, please let me know. I'll guide you as many places as possible. Please note that some places are located in a little far away from the center of the city and it may need some time to go and come back. If you want, you can try kimono experience, tea ceremony experience, and so on, too.

This tour is recommended for the first visitors to Kyoto. Kyoto had been the capital of Japan for 1000 years and has many old temples and shrines to visit. In this tour, you can visit two of the most famous and popular sightseeing spots in Kyoto and see the wonderful tradition, especially about Buddhist culture.

In Kyoto, there are many temples which have many Japanese maple trees. They turn into red around November 20 or so. (It depends on the year.) Many people not only from the world but also from all over Japan visit Kyoto during this period. You will be definitely amazed at the gorgeous world you can see with your eyes. 'The early bird gets the worm'. We should start early and enjoy the marvelous world before so many people come. (Even at 8:30, you will find so many people at Tofukuji Temple!)