This time let's learn about myo-oh that is believed to be a messenger or an incarnation of Dainichi Nyorai in esoteric Buddhism. Myo-oh is characterized by angry facial expressions and multiple faces, eyes, hands and feet.   By these strange and dreadful figures myo-oh tries to save those beings that have slipped through the hands of nyorai and bosatsu.  So he uses such means as threatening and intimidation in order to bring unfaithful people back to the teachings of Buddha.  In this section, let me write about Godai Myo-oh ( Five Great Wisdom Kings ) and two other myo-oh; Kujaku ( peacock ) Myo-oh and Aizen Myo-oh.

In the first section, I already touched on moss-covered Fudo Myo-oh of Hozenji Temple, Osaka.  Fudo Myo-oh is ranked highest among the Godai Myo-oh statues. It is usually seated in the center, surrounded by the other four myo-oh statues.  Fudo Myo-oh has a fierce look with kaen, a fiery aureola.  Since not all people can be led to salvation with gentle words, he resorts to the final means of wrath.

The other four Great Wisdom Kings are Gozanze Myo-oh ( east ), Gundari Myo-oh ( south ), Daiitoku Myo-oh ( west ) and Kongoyasha Myo-oh ( north ).  Gozanze oppresses three worldly desires of greed, anger and ignorance as well as rules the lapse of time, past, present and future.  It is a three-faced and eight-armed statue standing on the Hindu god Siva and his consort.  Gundari gets rid of all the obstacles and settles difficult matters.  He holds coiled snakes, symbolic creature of worldly desires, around his arms and legs.  Daiitoku suppresses all the evils in this world and was a deity of war victory towards the end of Heian period ( late 12th century ).

It is a six-faced, six-armed and six-legged statue with three eyes on each face, riding on a baffalo.  Kongoyasha destroys various kinds of evil with a kongosho weapon in his hand.  The statue is three-faced and six-armed with five eyes in the central face.  What a weired appearance!  You can see the oldest group of Godai Myo-oh at Tohji Temple, Kyoto, well-known for the tallest five-story pagoda in Japan.

Kujaku ( peacock ) Myo-oh is believed to cast away diseases, speed up recovery from illness and be good for life extension, because peacocks are said to get rid of all the poisons by eating poisonous weeds and snakes.  Kujaku Myo-oh dates back to Nara period ( 8th century ) unlike other myo-oh statues made in Heian period.  It is given a female position in India, so it is characterized by a tender facial expression like a bosatsu statue.  She rides on a peacock with its wings open, usually four-armed and crown-headed.  One of the most famous Kujaku Myo-oh, sculpted by Kaikei in Kamakura period ( 1192-1333 ), is housed in Kongobuji Temple, Koya-san, Wakayama Prefecture.

Aizen Myo-oh purifies sensual lust and elevates it to the faith in esoteric Buddhism.  This myo-oh was widely believed among the aristocratic class in Heian period because it helped to create harmony between people and  to calm down battles.  The statue has one face with three eyes and six hands holding various articles including a bow and arrow.  Aizen Myo-oh resembles Eros and Cupid in Greco-Roman mythology, in that some statues are posed drawing a bow to release an arrow into heaven.  One of the main Aizen Myo-oh statues is housed in Saidaiji Temple, Nara.  The body of the statue is painted in bright red, which represents sensual lust.  Public viewing is in spring and autumn only.

Next time let's learn about ten-bu.  See you. soon. 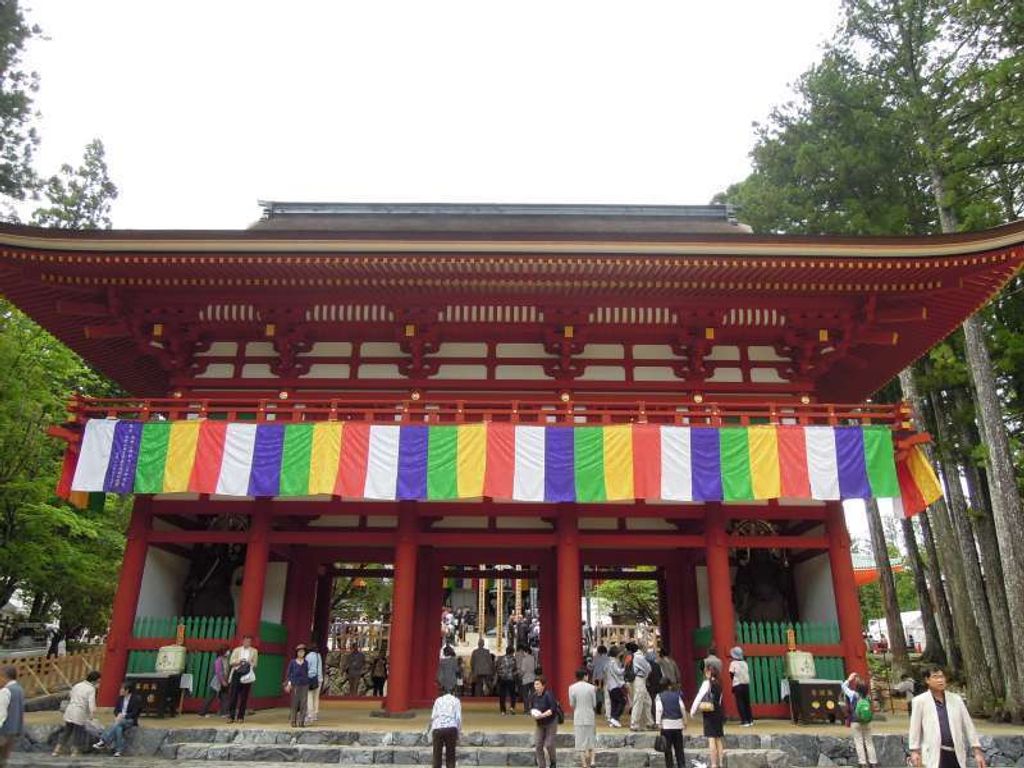