Looking for nature in Tochigi? You won't have to look far as you travel around. The Nasu Mountains are some of the best in Japan; a Japanese Heritage Site for Night Views offering spectacular illuminated flowers; and cliffs and waterfalls aplenty. Here are the four most beautiful natural spots to relax as you travel around Tochigi Prefecture: 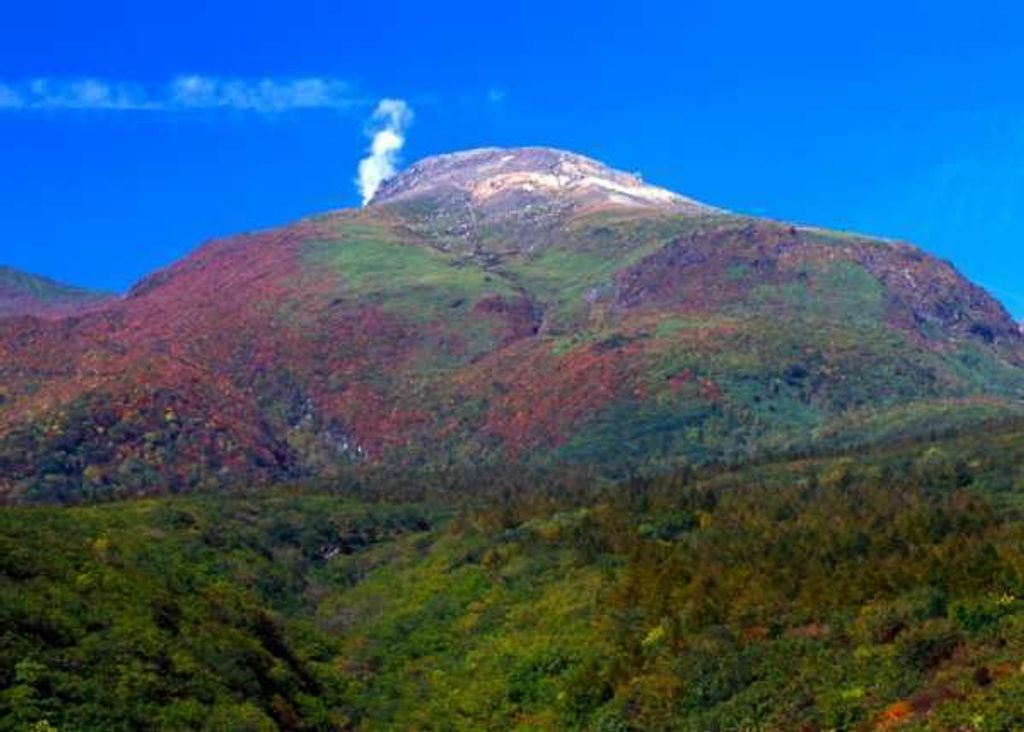 Among the Nasu Mountains which can be counted as one of the Top 100 Mountains of Japan, there is the main peak of Mt. Chauzu which is an active volcano. Smoke rises from everywhere and the smell of sulfur hits you as you walk around the area. Even at an altitude of 1915ｍ, there is a low tree line since it is a volcano and there is a feeling of reaching the summit of a high mountain. The ropeway which connects the 7th and 9th stages can easily take passengers up to the peak, and the area is popular especially during the autumn due to its wonderful scenery. From Ropeway Sancho Station, there is a 40-50 minute walk to the top of Mt. Chauzu. Once you carefully make your way across the rock-covered slope, you will be witness to a 360-degree panoramic view and spectacular plumes of smoke that can only be seen on this mountain.

The Nasu Highland Observation Point that is at the 1048m point descending along the prefectural highway of the Nasu Highland Line on Mt. Chauzu has been registered as one of the Top 100 Lovers’ Paradises. Aside from the Nasu Mountains, you can also view the Kanto Plain, Mt. Tsukuba and other features if the weather is good, and the area is known for being able to see an especially beautiful nightscape and sunrise. Close to Yahata Onsen is the Yahata Rhododendron Community. Beginning from late May, 200,000 rhododendron blossoms are in full bloom which paint the highlands in scarlet. Selected as one of the 100 Most Tasteful Landscapes by the Ministry of Environment and as one of the Top 100 Scenic Spots in Tochigi Prefecture, the Yahata Rhododendron Community has a nature trail which you can enjoy.

There are plenty of places to have fun such as the 10 large roller-coasters of Nasu Highland Park, Nasu Safari Park where you can encounter animals up close from your car, Nasu Animal Kingdom where you can pet the animals, and the Minamigaoka Dairy Company which has free admission. Finally, you can relax in the hot spring that has the highest output of water in the prefecture, Nasu Onsen. 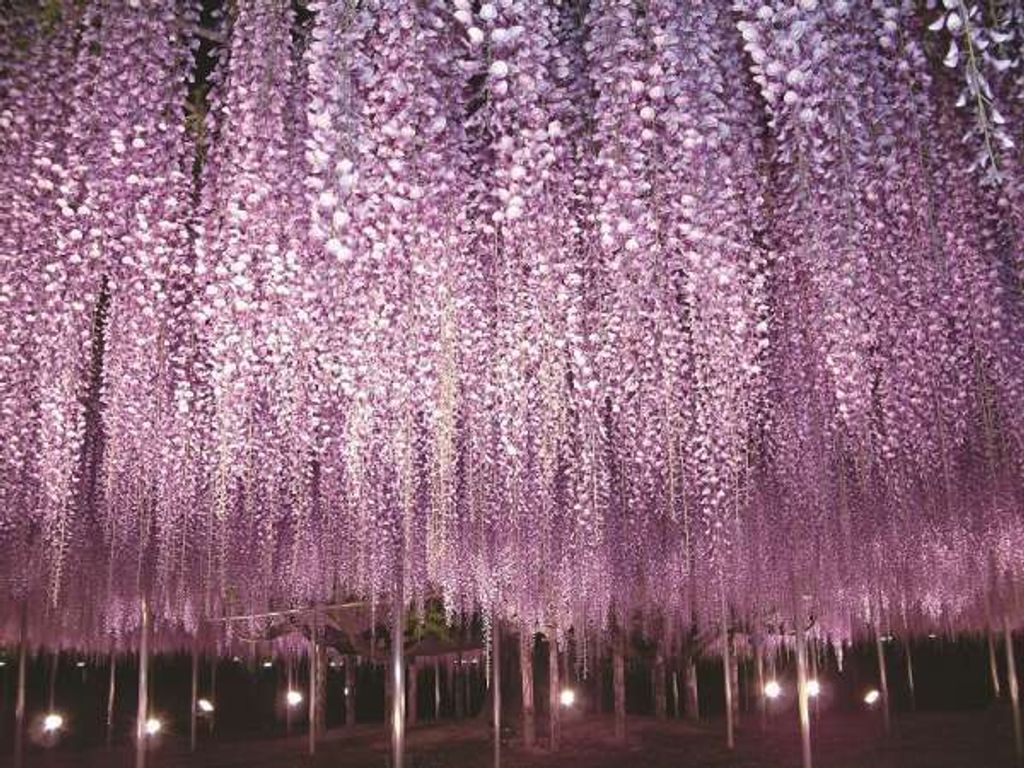 Ashikaga Flower Park which has become famous for its wisteria blooms has more than 350 wisteria trees on its huge 92000㎡ grounds. The year is divided into 8 seasons with a floral theme which begins with winter peony in early January, so that flowering plants such as wisteria, hydrangeas, irises and flowers can be enjoyed all throughout the year. During this time, the Giant Wisteria Festival which takes place from late April to May is popular, attracting more than 500,000 people annually. Designated by the prefecture as a Natural Monument, the 80m-long white wisteria tunnel and the 3 giant multilayered wisteria trellises that cover the equivalent of 600 tatami mats are truly attractive. Along with purple, there are unusual colors of wisteria such as gold and white which can be seen, and together with 5000 azaleas, they provide something worth seeing.

Also, the Bejeweled Flower Garden that occurs 3 times from late October is the largest illumination show in the Kanto region that has been designated as one of the Top 3 Kanto Great Light Shows as a Japanese Heritage Site for Night Views. The symbolic tree of the Miraculous Giant Wisteria is decorative illumination imagining a wisteria-colored flower cluster. The sight of it waving in the wind just like the real thing is impressive. The Wall Mural of Light that shines in the mountain river and the areas which take advantage of the effect of glass on the surface of the pond are also popular. In 2014, Ashikaga Flower Park was selected as one of the Nine Dream Tourist Destinations in the World by CNN. The 140-year-old Miracle Wisteria in the park was the basis for The Tree of Souls featured in James Cameron’s “Avatar” which has also led to the park being the focus of attention from the world as a tourist spot. Another plus is that the park can be easily accessed by car or train within 90 minutes.

Ryuokyo is located between Kinugawa Onsen and Kawaji Onsen. A gorge whose volcanic rock was eroded over its 3 km, its steep exposed bedrock evokes a violent dragon.  Ryokyo is basically divided into 3 sections. The upstream Shiryu Ravine is notable for the purple rocks that flowed out during the early volcanic activity. The midstream Seiryu Ravine accumulated volcanic ash that changed the color of the rocks blue. And the downstream Hakuryu Ravine has rocks on either side of the stream that were formed from white volcanic rock. Visitors will never tire of the beauty of this gorge filled with changing scenery.

The entrance to Ryuokyo starts from Hakuryu Ravine to the open-air bath at Kawaji Onsen over a distance of 6km on a gentle nature trail that takes 3 hours to cover, so that many people visit during the spring and fall seasons. There are 4 types of courses which include a 1.5-hour course that loops back from the most popular spot of Musasabi Bridge and a 3-hour course that goes beyond Ryuokyo to Kawaji Onsen. You will want to choose the course that best meets your stamina and time.

There are picturesque spots such as Nijimi Bridge at the southern entrance for the courses where you can view a rainbow on a good day at Nijimi Falls, Goryuo Shrine where you can yell out to get your wish, and the rough Hakuryu Ravine. It’s almost like taking in the beauty of a Japanese painting. Musasabi Bridge has the most incredible panorama in Ryuokyo Gorge. Just on the borderline between Hakuryu and Seiryu Ravines, you can view the changes in scenery upstream and downstream. It’s also fun to take that stroll as you search for the nature-created art works such as Sokonashi Marsh where the nationally-designated Natural Monument of the forest tree green frog lives, the kame-ana potholes where rocks have fallen and shaped the ground through the actions of water, and the skunk cabbage wetlands. 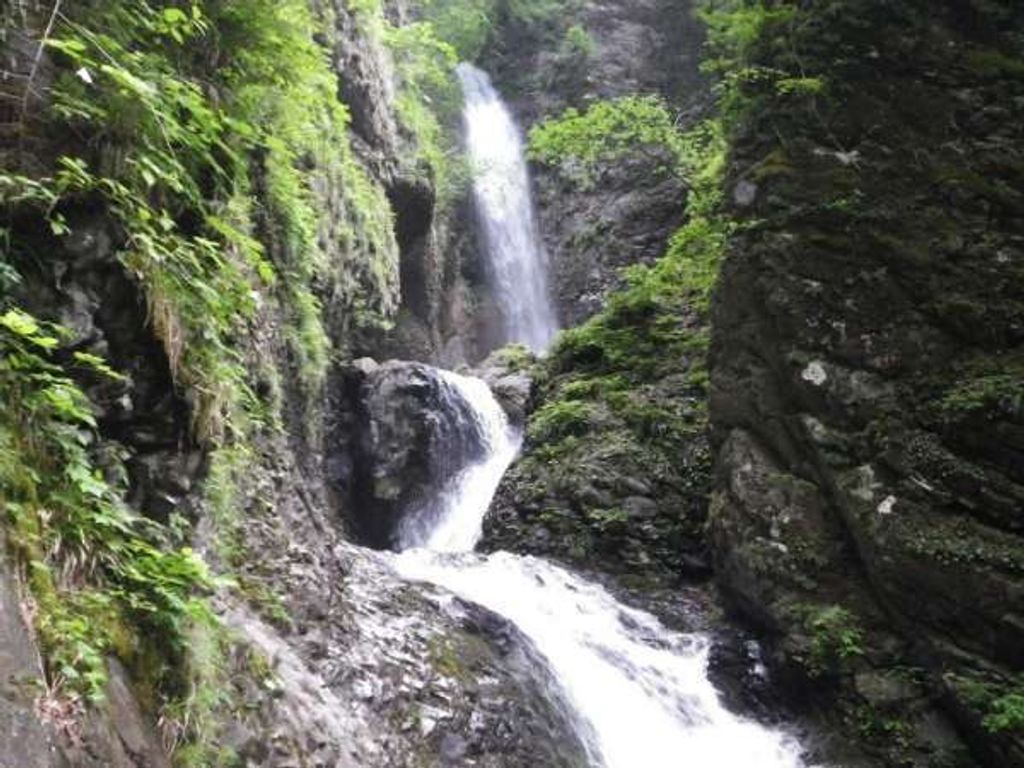 Nasu-Shiobara is located at the northern end of Tochigi Prefecture. Ryuuka Falls is in the Shiobara Gorge which has the picturesque nature of Nikko National Park and onsen rich with hot spring water. Among the 100 or so waterfalls in the area, there are the especially beautiful 10 Major Waterfalls of Shiobara of which Ryuuka is at the top of the list. At a total length of 130m, making it the longest waterfall, the sight of the huge quantities of water being squeezed down through the 3 levels of precipitous rock is a spectacle that seems to be rushing right at you. The surrounding rock is black and rough and after being carved over many, many years, it further brings out the white waterfall so that you can feel the vibrancy of the great land. There is an observation platform set up directly below the waterfall so that you can view it at a close distance. Please be aware that after a heavy rain, the amount of water coming down will be enough to drench your clothes.

There is a nature trail that begins from the parking lot along the national highway. Although the trail which takes 40 minutes for a round trip has a lot of undulations, it is not a difficult road and is very easy to traverse. Ryuuka Falls is the terminus for the trail but there are other waterfalls along the way. From the entrance to Ryuuka, there is Nuno Falls which overlooks the Hokigawa River. And just ahead, there is Fukyo Falls which has a drop of 10m. From the suspension bridge, you can also observe rock wall formations known as columnar joints (developed column-shaped fissures inside the rock). The season of fresh greenery is a fine time but the trail is especially beautiful during autumn due to the many maple trees in the area. There is another waterfall nearby which is also one of the 10 Major Waterfalls of Shiobara, Mikaeri Falls along with the Momiji Gorge Suspension Bridge, so that you can enjoy the beauty of Shiobara Gorge to your heart’s content.