5 Awesome things to do in Ehime

If you are traveling to the island of Shikoku, then why not stop off at Ehime Prefecture. One of the oldest hot springs in Japan, Dogo Onsen, has been used for over two thousand years. TripAdvisor's number 2 Japanese castle, Matsuyama Castle, and an incredible festival featuring Taiko drums, are all reasons to visit Ehime during your stay in Japan: 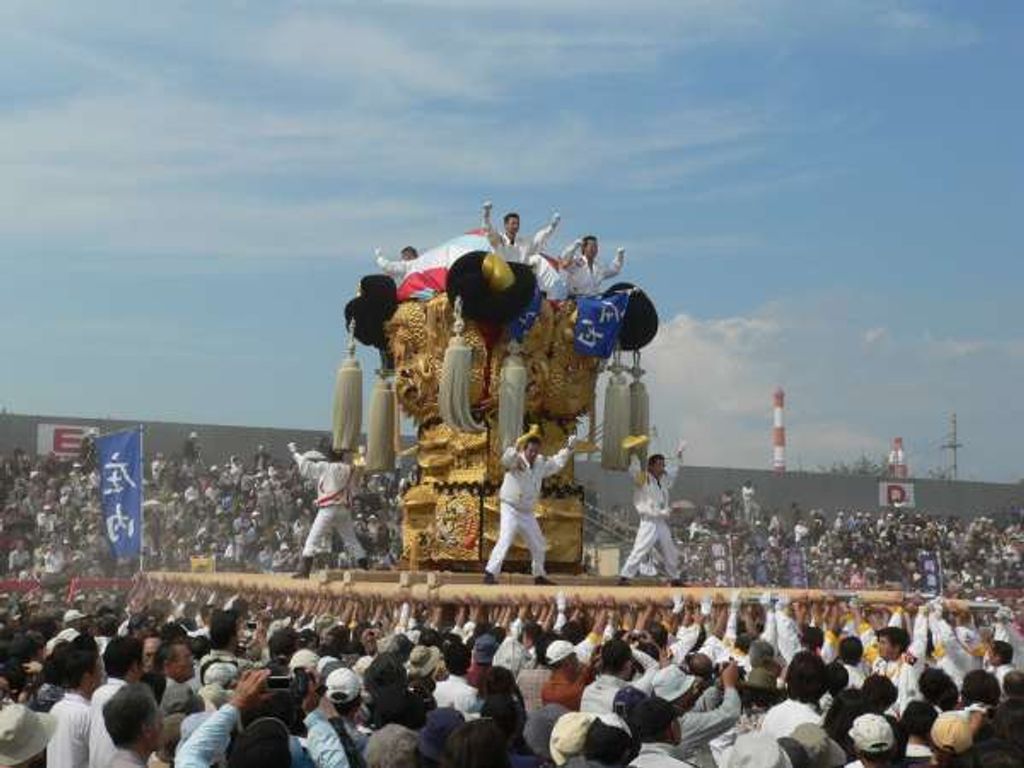 The origins of the festival are not known but the mikoshi togyo (transfer of a portable shrine from its place of enshrinement) has been held every autumn for over a thousand years to pray for a bumper crop. About 100 years ago during the Meiji Era, in tandem with the development of the regional economy, a sense of rivalry increased among the local residents through taiko floats which quickly led to their increase in size and their development into the luxurious floats of today with their embroidery in gold and silver tassels. The city of Niihama is divided into 5 districts and a total of 51 floats take part with each large float weighing 3 tons with a height of 5.5m and a length of 12m supported on 4 wooden poles carried by as many as 150 men as they parade within the city. In addition, to boost the liveliness of the festival, the “Hachiawase” battles take place in which the floats are suddenly rammed into each other which has led to the festival also being called the Fight Festival or the Men’s Festival. There have been some fateful confrontations since the early days and during the festival, even the prefectural police has had to be called in.

Several taiko floats gather at one place and the wheels are taken off so that they are moved solely under human power. Under the directions of the leader on top of the float, the float is carried on top of the crew’s shoulders and a competition begins with the float being raised by all hands in an action known as sashiage, undoubtedly a show of male strength and technique. This powerful Kaki Kurabe has been a popular event year after year which can be seen safely up close through paid reserved seating at the Ikkunomori Museum and reservations can be made beforehand online. The Kaki Kurabe is held every day for 3 days during the festival, and it is especially on the final day that the climax occurs when the men’s highly-charged enthusiasm comes through. 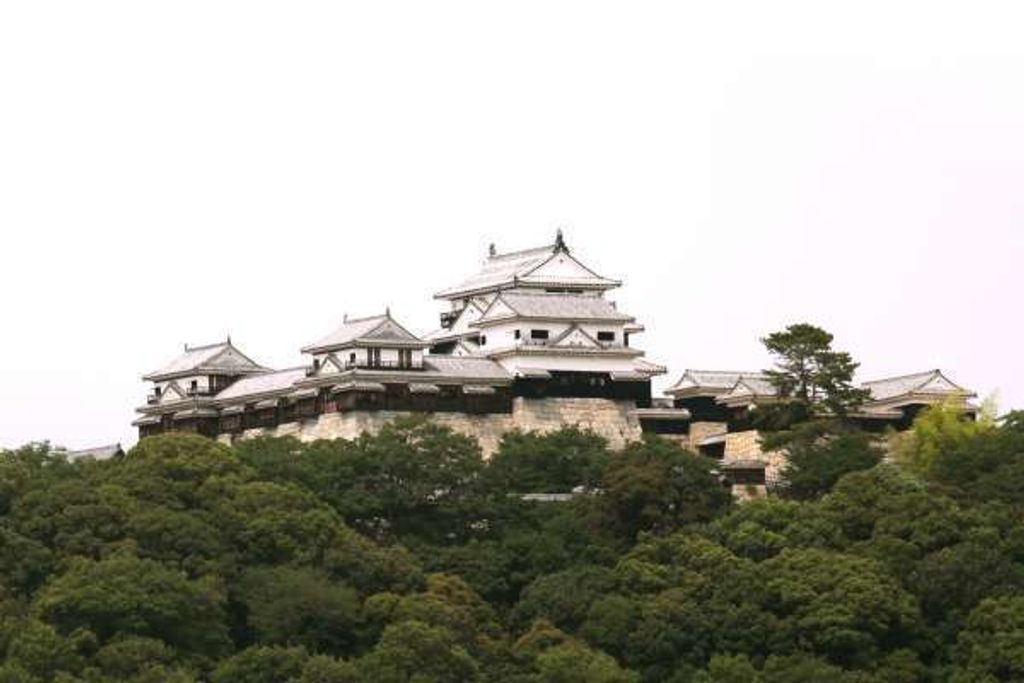 Built in 1602 by Yoshiaki Kato, Matsuyama Castle is the largest fortress in Shikoku that took 25 years to complete. It is only one of 12 castles in the entire country which has retained an original pre-Edo Era keep, and the valuable castle itself has retained its original appearance with 21 Important Cultural Properties. Matsuyama Castle has been selected as one of Japan’s Top 100 Castles, Japan’s Top 100 Beautiful Historical Landscapes, and even as the No. 2 site in a TripAdvisor survey for Japanese castles. The inner citadel is 132 meters high which is three times as high as Himeji Castle, making it the highest-placed castle. Furthermore, with its keep soaring 30m, visitors can get a prime 360-degree view of Matsuyama City. From there, you can also get a glimpse of the high level of completion of the modern castle below through installations such as the turrets. To get to the inner citadel, you can walk, take the ropeway or get onto the one-person lift. There are 4 routes to get up to the castle, but the Kuromon-guchi Gate route was the official route during the Edo Era and while going on that way, you can view the Ninomaru Historical Relics Garden, and since the route going through the forest was the one that generations of castle lords took, it is also seen as the place which has retained an Edo Era pavement.

The large keep is a layered pagoda type with three levels and three floors with a basement that was the final completed example of castle architecture in the Edo Era. The climbing stone walls of Horinouchi were unusual walls of their kind in Japan which were designed to stop invading enemies from the mountain side and were a defensive tactic which linked the two stone walls on the mountain side between the buildings at the foot of the mountain with the keep at the top. Also, the inner citadel’s stone walls which exceeded 14m in height and had a folding-screen-like structure are memorable for their grandness. On the 1st floor of the keep, there is an area where you can try on samurai armor and have photos taken freely. You can get that feeling of a warrior. Portraits done in ink of samurai which were presumably sketched by restoration workers between 1848 and 1854 have been discovered and are now displayed inside the keep. 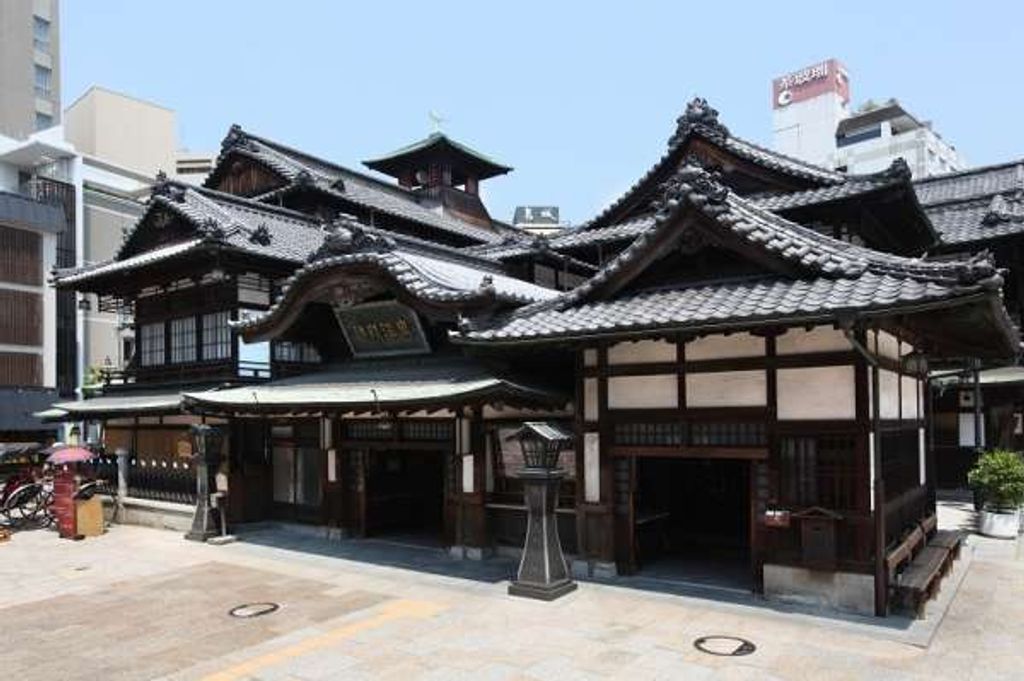 Dogo Onsen, which has a history of over 3000 years is known as the oldest onsen in Japan, is ideal as a hot spring cure and a beauty treatment with its pure alkaline waters. The wooden three-story Dogo Onsen Main Building which was built in 1894 is a symbol of Dogo Onsen which can be enjoyed even on a day trip. The great Japanese author, Soseki Natsume, has even written about it in his novel, “Botchan”, and the building was a model for the bathhouse in Hayao Miyazaki’s “Spirited Away”. There is the legend of the white heron which healed its injury at the onsen which is written in the clock tower on the roof of the third floor of the main building, and there is a large drum hanging in the center which used to be struck once an hour since ancient times to broadcast the time, but currently it is struck daily at 6 a.m. to signal the opening of the bathhouse and then at noon and in the evening for a total of 3 times. The 1st-floor Kami-no-Yu is separated into 2 baths for men and 1 bath for women while on the 2nd floor, the Tama-no-Yu has 1 bath each for men and women, and there are 4 bathing plans with different rates. One plan is for bathing only, another plan includes bathing with a rental robe and tea and snacks with access to the relaxation area on the 2nd floor and there is another plan which includes the robe and snacks plus access to private rooms on the 3rd floor. For free, you can take a look at the room Botchan-no-Ma which is connected with the author Natsume, along with the Yushinden for those using Tama-no-Yu. The Yushinden was built in 1899 as a bath for the Imperial Household.

There are plenty of tourist spots within walking distance such as the Tama-no-Ishi which brings good luck if you pour hot water over the stone, Hojo-en where you can enjoy a gadget clock with a little boy coming out every hour to music as you take a foot bath, the Dogo Shopping Street which has cafes and souvenir shops selling famous pastries such as Ichiroku tarts and Botchan dumplings, Yu Shrine which protects the waters of Dogo, and the beautiful vermilion Isaniwa Shrine. It’s also fun to take a ride on the steam engine Botchan Train around the streets of Matsuyama. 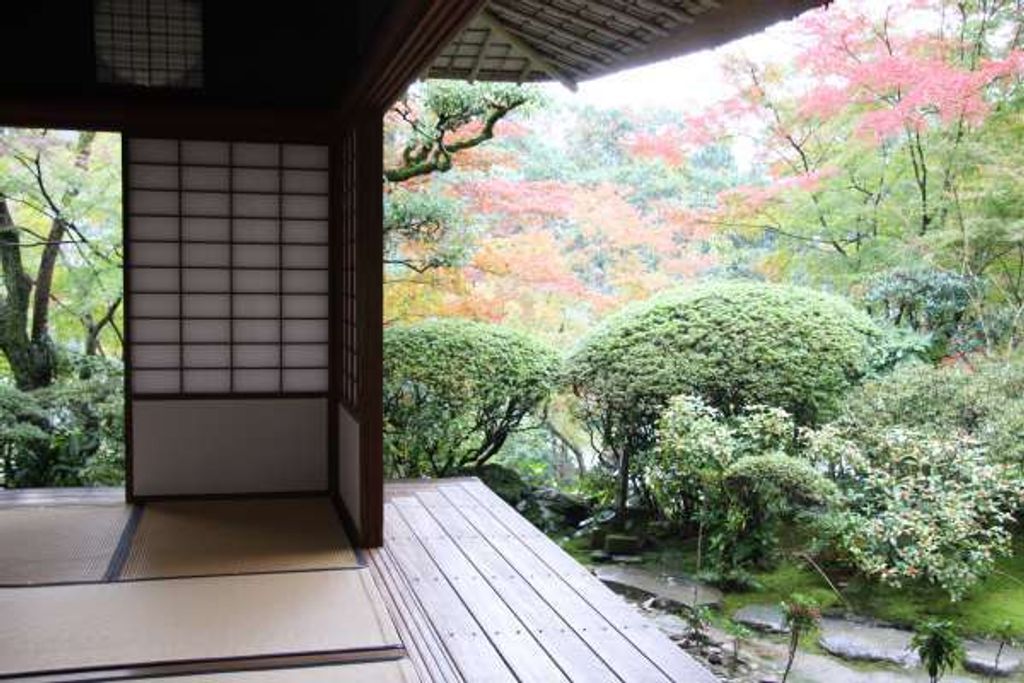 Garyu Sanso is a mountain villa constructed in the traditional sukiya style over an area of 10,000 ㎡ overlooking the picturesque area of Garyu-no-Fuchi, a basin on the Hiji River. It has also been called Ozu Katsura Imperial Villa since Ganryu Sanso’s beauty is second to none even to the real Katsura Imperial Villa in Kyoto. Planned over 10 years and built in 4 by trader Torajiro Kawauchi since he had wanted to spend his remaining years in the area, the villa was finally completed in 1907. Gathering together some of the famed carpenters from Kyoto and Kobe, they built the three main buildings of the villa (the main villa of Garyu-in and the tea houses of Furo-an and Chishi-an), and a Japanese garden which makes use of the surrounding beauty of the Hiji River to create masterpieces of architecture that are now Tangible Cultural Properties open to the public and have earned one star on the Green Michelin Guide. Only open on Sundays and holidays from April to October, you can have matcha tea and Japanese confections in the Furo-an.

The main villa of Garyu-in was the building that caught the most passion from Kawauchi as a farm-style single-storied building with thatched roofs that used specially-selected choice wood from all over the nation. Even within the simplicity of the Geirei-no-Ma which is the entryway for Garyu-in, there is fine craftsmanship applied to areas such as the ceiling. In the Seisui-no-Ma which was built for summer, its ceiling is higher than that for any other room, and it can be seen that it was created to feel the coolness. The ranma (openwork screen over sliding doors) of the household shrine was carved to illustrate all four seasons. The Isshi-no-Ma is a tatami-mat study room which incorporated the style of the Katsura Imperial Villa into parts like the round windows, open verandas, the sliding doors and the ceiling panels, and when the mats are removed, the room was also used as a Noh stage. The ranma carvings involved openwork of elegant wild chrysanthemum and Chinese phoenixes, and everywhere from the pillars to the ceiling, it can be seen that the design was done to the smallest details. The Kagetsu-no-Ma (Misty Moon Room) has alcove shelves that appear hazy with scrolls illustrated with Mt. Fuji, altar rooms at the back of the round windows, and when the room is candlelit, it takes on a misty moonlit appearance which provided the impetus for its name. You will want to appreciate this masterpiece architecture with its special feel of the world of the artisan at every turn. 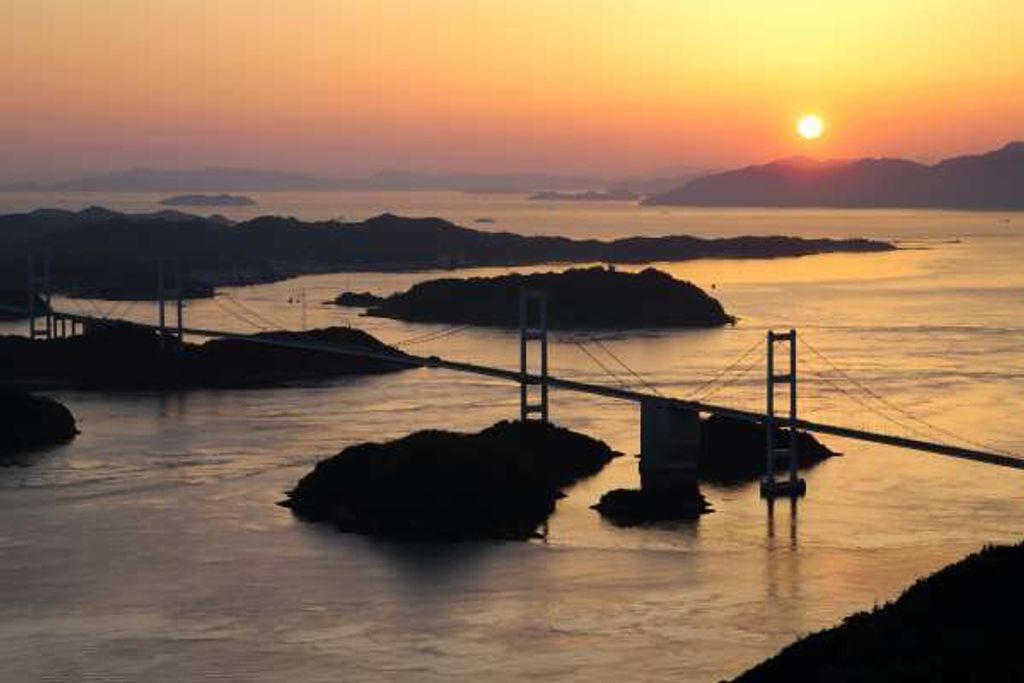 This observatory park atop the 307.8m Mt. Kiro located southeast of the Kurushima-Kaikyō Bridge at the southern tip of Oshima Island has the most beautiful view within Shimanami Kaido. On the way up to the observation point, there is a terrace that was built on the suggestion of photographer Kitao Ando which is the best place to take that photo of Kurushima-Kaikyō Bridge. On top of that, the observation point with its 360-degree panoramic view was designed by architect Kengo Kuma. The building itself is built underground with trees and other plants arranged around it so that the natural view is protected and it cannot be seen from outside. From the point, the Kurushima-Kaikyō Bridge, the world’s first triple suspension bridge, and the Kurushima Strait which is responsible for one of Japan’s Three Great Rapid Tides can be seen to the northwest, while to the south, the city of Imabari and, if the weather is clear, the Ishizuchi Mountain Range, which is the highest range in Western Japan within the Shikoku Mountains, can be seen to the southeast. Viewing the 184m-high Kurushima-Kaikyō Bridge from a point that is 1.7 times higher makes for the perfect photo spot.

Mt. Kiro Observatory Park can be accessed by car or bicycle. The Shimanami Kaido Cycling Road is not that far away so the view is very much worth seeing although the slope goes up for up to 3 km. Open 24 hours, the magic hour during sunset is especially the perfect time to view the lit-up Kurushima-Kaikyō Bridge as the sun dips below the horizon. There are shops within the parking area of the observation point, and it is only here that you can sample the popular Tamashio Ice Cream created from seaweed and rich in minerals. Next to the parking lot, there is a cute stone statue of a legendary huge turtle with a statue of Kannon in the background; the name of the mountain, Mt. Kiro (old turtle), is derived from this turtle.