Wondering what to do in Osaka? In that case, you should go on a Osaka food tour with a local guide. Osaka is called the “nation’s kitchen”. In the Edo period, Osaka was the center of transportation and commerce. All the different types of food from all over the country was gathered in Osaka before being transported all over the country where it was needed. Because of this history, Osaka’s food culture developed rapidly and the city became famous for all its delicious foods. There are lots of street food you can try around Dotonbori, the area of the city that is a sightseeing spot in itself.

There is an unique food culture to Osaka called “Konamon” culture. The Japanese word “Konamon” in the Osaka dialect or “Konamono” in standard Japanese literally means things made out of flour. Widely interpreted, this includes the favorites of Osaka, “Takoyaki” and “Okonomiyaki”, both which will be explained below, as well as the Japanese noodle dishes “soba”, “udon”, “ramen”, and even foreign dishes like pasta and pizza.

The word “Konamon” became widely known throughout the nation in the 1980s. It is said that this is because a comedian from Osaka announced on TV that Osaka is all about its “Konamon” dishes. But why are these dishes made out of flour so popular in Osaka? The reason is because of the food shortage after World War II. Since there was not enough rice to go around, people used the flour that was distributed by the U.S. military to make a sort of dumpling eaten in a soup. Later on, bread was introduced into the school lunches and food trucks selling westernized food using flour like pancakes, curried rice, and “Tonkatsu” (pork cutlets) we’re first introduced in Osaka.

Food You Should Try in Osaka 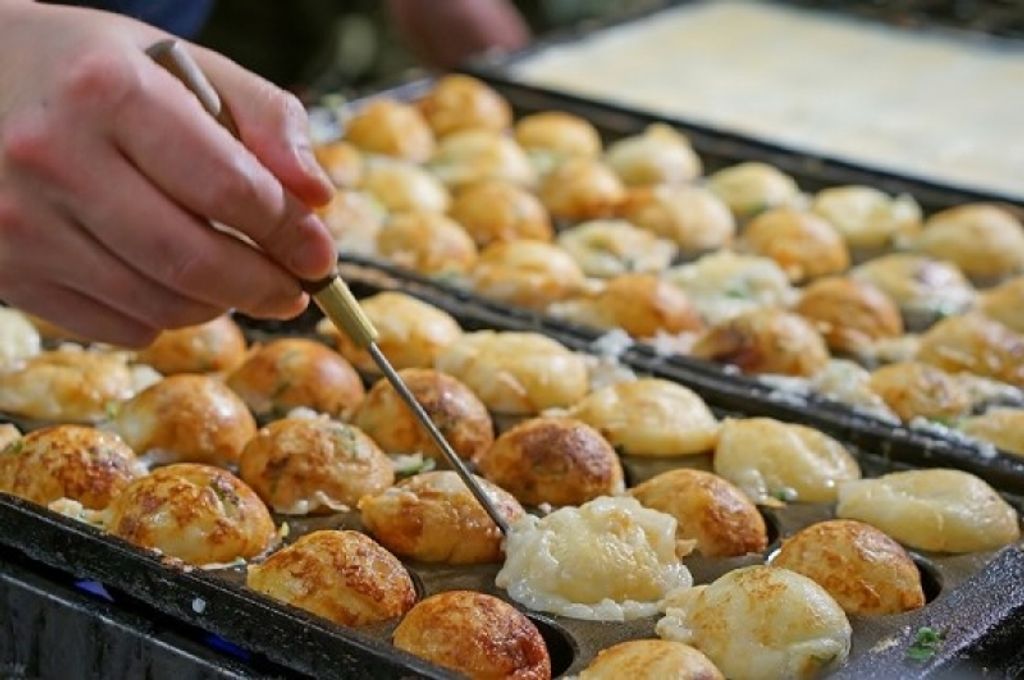 “Tako” means octopus and “Yaki” means something that’s baked or fried. Takoyaki are small balls of fried batter with bits of octopus in the middle and sauce on top. The outside is crispy and the inside is soft. When it’s just been made, the inside is very hot so even though it’s a size that will easily fit into your mouth, I advise against eating it in one bite unless you want to burn your tongue. Splitting in half before eating it should cool it down enough to enjoy it. In Osaka, there are lots of stores selling takoyaki, but most local people also have a little fryer to make takoyaki in their homes. They eat this delicious dish about once a month whereas people in other areas of the country eat it maybe once or twice a year. That’s how popular takoyaki is in Osaka. 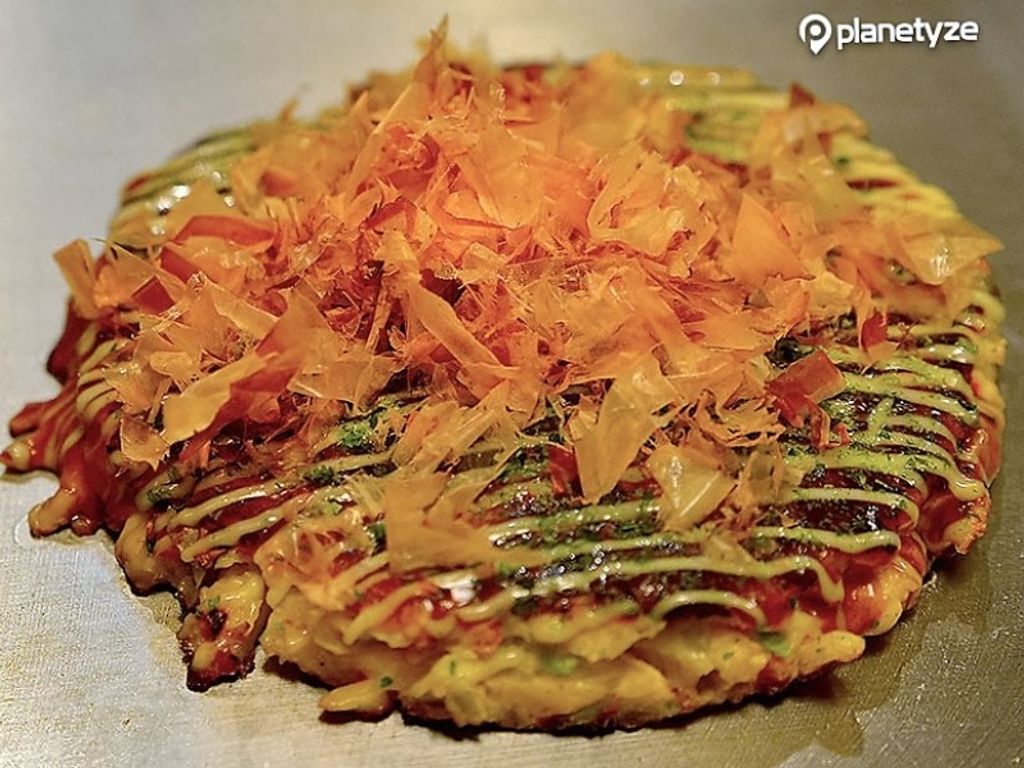 The people of Osaka actually enjoyed westernized food made out of flour from even before the war. They were eating a cheap pancake like dish made out of flour batter with cabbage or green onion mixed in, fried and eaten with a sauce on top. From this cheap version, the people started adding ingredients that they liked like slices of meat or  seafood. And this is how the modern Okonomiyaki was born. “Okonomi” means “preference” or “to your liking”. So some people believe that the name “Okonomiyaki” was given to this dish since people put in the ingredients that they liked into this pancake. Others say it’s because in those days, the restaurants that served this dish had small booths for couples and you ate it with the person you had a “okonomi” or preference for. Nowadays, there are restaurants that serve the pancake already made or have customers cook the pancake by themselves on the pan on the table. If it’s the latter, you can also have fun cooking the okonomiyaki by yourself.

This “Kyabetsu-Yaki” is a cheaper version of the above Okonomiyaki. “Kyabetsu” is actually the word “cabbage” pronounced in Japanese. From this you can surmise that it has cabbage in it. The round pancake is folded in half to make it easier to eat and is often sold at stores lining the street so that you can eat it while walking or standing around. Since they are so similar, the difference between “Kyabetsuyaki” and “Okonomiyaki” is lost on even the Japanese people from outside the Osaka area, but according to the local people, Kyabetsuyaki is a snack and Okonomiyaki is a meal.

This is another version of the okonomiyaki, except that the ingredients in this pancake are mainly only green onions. And green onions in Japanese is “Negi”. The sauce is different too. Okonomiyaki and Kyabetsuyaki use a slightly sweet rich sauce that looks gooey like gravy. Negiyaki on the other hand is eaten with soy sauce, so it’s not as heavy on the stomach. 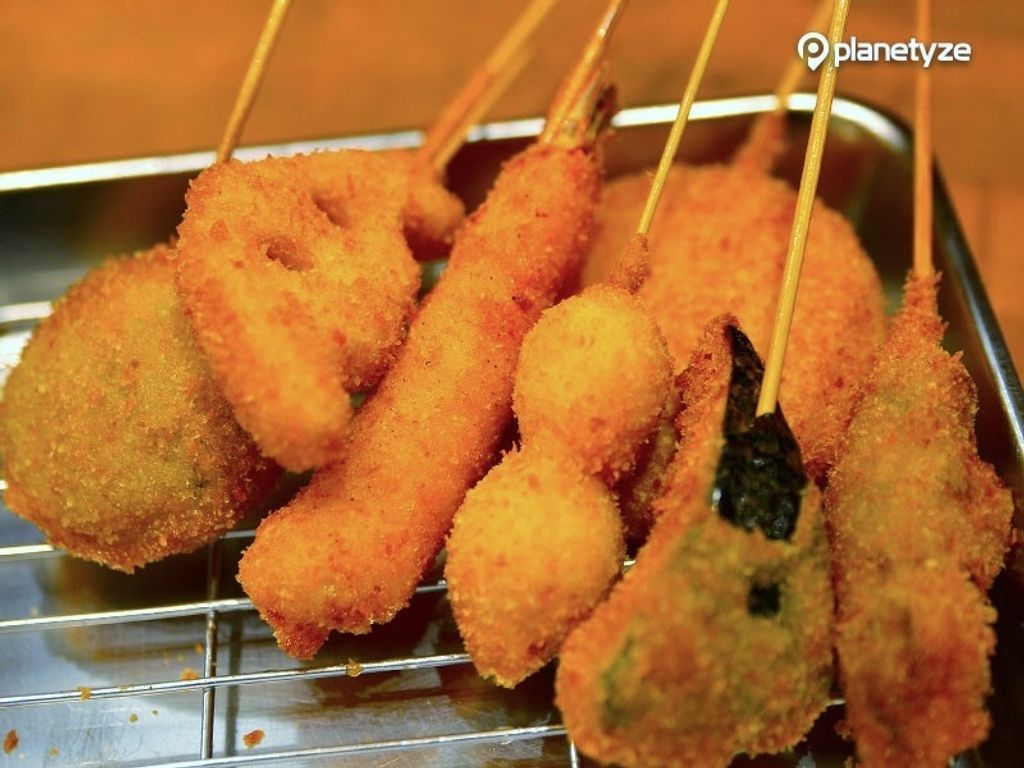 This is another famous specialty of Osaka. Kushi-katsu are pieces of meat and vegetables skewered with sticks, covered in a flour batter, crumb coated, and then fried. You eat them by dipping them in sauce at the table. But the golden rule is that you cannot dip it in twice, so make sure you get enough sauce the first time. This rule exists for sanitary purposes, because the sauce jar is shared by everyone sitting at the table. And nobody wants to share the sauce jar in which someone dipped their half eaten piece of Kushi-Katsu in. You usually can order which ingredients you want to eat, and when they are fried, they will be served one or two at a time, piping hot. Whereas there are some restaurants where there is a fryer embedded in the table and you can fry your own Kushi-Katsu by yourself. This is fun to do as a uniquely Japanese experience, but personally I think the ones fried by the kitchen staff taste better.

Yakisoba is the Japanese name for fried noodles. You can find this dish anywhere in Japan but with all the Konamon food using sauce in Osaka, the local people are very picky about the taste of the sauce. Thus, the sauce flavored yakisoba in Osaka has had to evolve more than in other areas of Japan, in order to satisfy the gourmet locals of Osaka. So, even if you’ve tried Yakisoba somewhere else in Japan, you should try it again in Osaka too. The flavor maybe a bit different from what you tasted before.

Trying all these Konamon food by yourself is not difficult if you just go down to the Dotonbori area. However, there are so many stores, it’s impossible to know which store or restaurant is the best to visit. And though some stores may have an English menu for foreign guests, many of them still don’t. So ordering from a Japanese menu while trying to figure out what’s what can be next to impossible. Maybe if you’re a person who doesn’t really mind what is served as long as you can eat something, these aren’t really big problems. However, if you’re a foodie who is especially interested in Japanese food, having a local guide who speaks Japanese explain all the different choices and help you pick out what you really want to eat is very helpful.

Below are food tours in Osaka which will help you with just that and also show you a good time.

4. Izakaya Hopping and Sightseeing in Minami, Osaka by Yoshihisa

6. Osaka Tour for Food and History Lovers by Aimu

8. “Kuidaore” or Pig Out Tour on Osaka Soul Foods by Yui

All the guides create their own tours so all of the tours are unique. You can also communicate directly with the guide to ask questions or convey requests, for example the length of a tour or what you want to eat, before actually booking a tour.

If you don’t find the perfect tour from the list of tours, you can request a tour for half a day, a full day, or more, listing what you’d like to see or eat or so on. You can even ask to combine a sightseeing tour and a food tour if you want. All of the guides will be able to see requests like this and the ones that are available during your requested dates will recommend a special tour itinerary just for you. This way you’ll be able to compare what several guides suggest and see which itinerary or guide looks to be the best fit for you.

At TripleLights, we provide a service of matching customers with the best tour and guide for them. It’s like a marketplace of guides from which you can choose, so enjoy the process of shopping for a tour.

Most of the tours are walking tours and they’re created so that you can use the public transportation system while sightseeing and get some practice traveling around the city. It’s an experience that will give you insight on how the local people move around during their daily lives. However, you also have the option of hiring a private car and driver for your tour or just to get around. This is an option that people with disabilities or elderly people find to be helpful. Because walking around the city for hours on end can be quite hard on the legs. Catching a taxi is also fine, but sometimes you just can’t find one, so having a private car is really convenient.

You should also take a look at the guides’ profile videos when shopping for a guide, to see what kind of person they are and also see the reviews they got from other customers. This is an important step in choosing a tour. At other sites, you aren’t able to choose your guide nor see what they look or sound like before the day of the tour. But having a pleasant companion during your tour, especially if you’re going to be sharing a meal with them, is an important aspect in having a great day. So choose the perfect guide to take you around the city of Osaka and eat the delicious food that you can only find here!

10 Foods You Must Try in Osaka

15 Most Popular Foods You Have To Eat In Japan

The Top 21 Most Famous Foods to Try in Japan

Plan your trip to Osaka with Akane N.