4 of the Best Sights in Beppu

Beppu, in Oita Prefecture, is a small seaside resort town. Surrounded by mountains, and ten minutes walk from the beach, Beppu is a great place to relax during your trip to Japan. Probably the most famous thing about Beppu are the mix of geothermal springs and Onsen baths. Here are four top attractions: 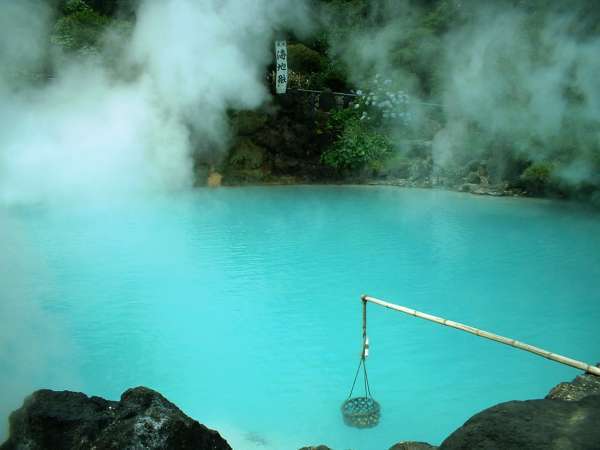 Many hot springs came into being due to volcanic activity from 30,000 years ago, and in the Kannawa and Kamegawa districts, gas and hot mud & water started gushing out from over 1000 years ago which prevented people from approaching, so that because of its resemblance to a picture of Hell as described in a Buddhist sutra, the springs were called Hells. Now, it is a popular tourist area where you can feel the pulse and the power of the Earth. There are 8 Hells in total, and you can take a walk around them within half a day to a whole day. Starting from the Sea Hell, if you walk toward Kannawa, it will be easy to traverse down the slope. The Sea Hell, Blood Pond Hell, Spout Hell and the White Pond Hell have all been designated as National Places of Scenic Beauty, so if you don’t have a lot of time, you will want to see these four.

The Sea Hell is a natural cobalt-blue hot spring with dissolved iron sulfate. There are tropical water lilies planted there which make use of the heat from the spring. You will want to try the pudding and the buns steamed from the hot springs there. At the Oniishi Shaven Head Hell, the shape of the ash-colored mud resembles that of a bald head which explains the name. The Hell-steamed sushi at the rest area is delicious. The Mountain Hell has steam coming from a mountain where you can encounter adorable animals such as hippos and flamingos which are bred making use of the heat from the spring. The Cooking Pot Hell is called as such from the cooking of meals by steam. Various hot springs of many kinds can be observed, and there are even 3 foot baths to be enjoyed. The Monster Mountain Hell was named after the area (Oniyama – monster mountain), but with the 100 alligators enjoying the heat there, it has also been called the Alligator Hell. The White Pond Hell is clear hot water but when it enters the pond, it turns a creamy white. Tropical fish from the Amazon River are bred there.  The Blood Pond Hell is a pond of naturally red heated mud containing iron oxide. The Spout Hell is a spectacular geyser which spews water up to 50m. These are distinctive Hells that are well worth seeing. 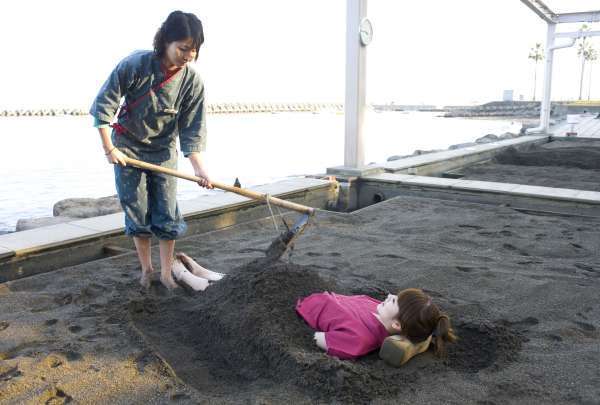 Located in a part of Shoningahama, one of the few natural sand beaches left in Beppu, this is a sand bath where you warm your body buried in sand that makes use of the geothermal heat of a hot spring. First opened in 1986, there is a movable roof so that the bath can be used even on rainy days, and change rooms, showers and indoor bathing facilities are also provided. In Kyushu, the sand baths of Ibusuki, Kagoshima are also famous, but due to the time needed to reach the place at the southern tip of Kyushu, the easily accessible sand baths in the heart of Beppu are also a hit with tourists. Only 12 people at a time can enter so there are often cases in which there are waits of over one hour, but if you have time, the staff can contact you by cellphone so you can wait and relax while strolling along the sea or enjoying the nearby foot bath.

Warmed by a salt spring, the bath is great for chills, exhaustion, muscle & joint pain, and cuts & bruises. The sand is kept at a temperature of 42 degrees C and bathing for just 10 minutes will bring a feeling of refreshment and a good sweat. After receiving a yukata from the reception desk, a staffer will shovel the sand over you. The ocean will spread out in front of your eyes and you will be able to relax while hearing the sound of waves. If carrying a digital camera or a cellphone, don’t forget to bring it with you since staff will be willing to take a picture of you. Once you get out of the sand bath, your body will cool down quickly from the sweat, so getting into a shower to completely wash off the sand and then heading into a bath is the rule. Shampoo, body soap and a dryer are supplied, and towels can be rented for a fee. This is a place which you can visit easily without needing to carry anything. 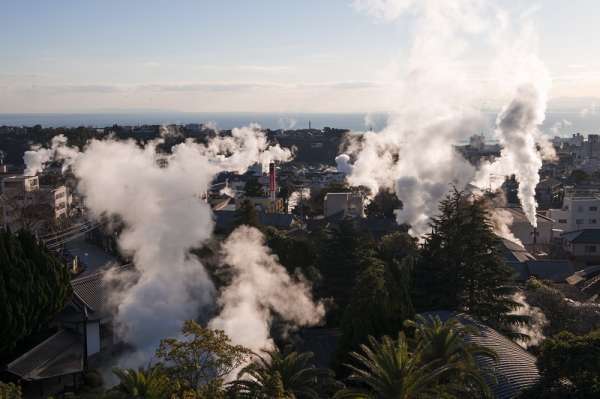 The group of hot springs in Beppu boasts an output of water that is tops in Japan and No. 2 in the world. Within that group, the one onsen that has amassed the largest number of springs is Kannawa Onsen. During his pilgrimage, Ippen Shonin, a Buddhist monk in the Kamakura Era, visited the Kannawa area and quelled the raging hellish district by opening a spa there which started Kannawa Onsen. Admired by the masses since the ancient times, it flourished as an onsen treatment health resort. At Kannawa Onsen, along with the Kannawa Steam Bath that Ippen started, there are a number of open-air baths that you can drop in at, and you can also enjoy going on a tour of the 8 jigoku made from the bubbling natural hot springs that are famous in Beppu tourism. In addition, vegetables and seafood caught locally are heartily cooked in the onsen steam to create Kannawa cuisine that even you can attempt at Jigoku Mushi Kobo Kannawa (Hell Steam Studio Kannawa), a spot that you have to visit.

The story goes that it was Ippen Shonin who established the Kannawa Steam Bath in 1276. Currently, it has been renovated and the facilities are as good as new. First off, wash your body at the adjacent bath, then put on the yukata or a T-shirt and short pants, and head to the stone hut for the steam bath. The hut is kept at 75 degrees C, and the floor is strewn with medicinal herbs that give off a pleasing scent. While holding a timer, lie down on your back for 10 minutes and experience the steam. You’ll be surprised at how much sweat will come out of you after that time. Afterwards, all that fatigue in your body will just melt away once you wash away that sweat in another bath. This is a place that you will want to visit if you come to Kannawa Onsen.

The Suginoi Hotel is located on a plateau 200 meters up from the sea, and on its roof is a hot spring facility. Japan’s largest observation open-air bath, Tanayu, which consists of 5 baths arranged in a terraced rice paddy style, and the onsen entertainment facility of The Aqua Garden where you can wear swimsuits so that even couples can enjoy themselves make up this facility. As you soak in the baths of Tanayu, you can view Beppu Bay and the clouds of steam rising up from Beppu; it’s a comfortable onsen that feels like you’re floating in the sky. You will really want to take a soak during sunset since you can also enjoy the gorgeous night view. Aside from Tanayu, there is a sauna with a view, a barrel bath wafting with the aroma of cypress, an aroma bath and other facilities so that you can the full enjoyment of an onsen tour. At The Aqua Garden, there are plenty of new hot spring experiences in store for you such as Fango Therapy which uses hot spring mud, the Salt Sauna which has a selection of 30 different salts, and the Float Healing Bath where you can float on water that has a high concentration of salt. You can also enjoy the Fountain Show from 6pm to 10pm with its display of water, light and sound. It’s an amazing magical display featured by designer Michel Amann who also handled a similar show at the Versailles Palace.

Inside the Suginoi Palace, there is plenty of variety among the facilities aside from the onsen. There is a spa to receive a real massage and treatments, a quick massage area to get treatments such as reflexology, a bowling alley that also features darts and a game corner, a karaoke box, a table tennis area and a fitness gym. There is also a souvenir shop with plenty of goods, the Beppu Shochu Storehouse with 2500 kinds of shochu from everywhere in Kyushu along with an advisor who can help you with your selection, and stores which deal in confections and food items that are great as souvenirs.

Looking for an authentic travel experience in Kamakura but still stuck at home? No problem! Why don’t you start by taking a Virtual Tour for a moment’s escape from the mundane and chaos with our professional guides in Kamakura?

Kyoko was an absolute delight! I asked her to provide a customized Kamakura tour with Kimono. While I was comfortable touring Kamakura on my own, I wanted to make it a cultural tour where I didn't feel like a tourist in a kimono. Kyoko was kind enough to arrive in a kimono of her own, so it felt like we were a pair of friends out for some sightseeing. Kyoko met me at the kimono rental shop and...
read more

We spent two days with Michiko in Kamakura and Nikko. She did a fantastic job of organizing our time and sharing her knowledge and love of these beautiful places! It was a pleasure to work with Michiko.
read more

Tomoko is vey good guide. We really had a great time.
read more

I was interested in seeing local sites and exploring Kamakura's ancient history while hiking through the area, but I don't speak Japanese. Hiring a local tour guide was a must. I checked a lot of guide user profiles and felt Maru was a good match based on my interests. She was incredibly knowledgable and friendly. She arranged a tour to see exactly what I asked in the timetable I had available. Ev...
read more

I was looking to do something different and Takao's soul-exploring trip was perfect. It was fun doing something a little deeper while visiting the temple versus just walking around and admiring the beauty. I enjoyed the ritual of the Sutru coping and enjoyed having Takao as my guide. He spoke good English and is such a sweet person.
read more

Hiro was amazing!! My husband, in-laws, and I did a Christmas Eve tour with Hiro in Kamakura and she absolutely made our day so special. So sweet and an absolute pleasure to be with. She had great information, recommendations & stories that really made our trip unforgettable. We would have only gotten 1/10 of the experience & driven ourselves crazy trying to figure out how to get to all the places...
read more

He knows the history, the places and includes my suggestions without stress and gave us good tips. He is super patient (my 2 daughters tested it while in a few places he recommended), knows how to move around fast. Thank you Junichi
read more