Looking for something a little different on your trip to Japan? Then in Fukuoka, you can find just that. A huge tower offering panoramic view of the city and seaside, both a marine and seaside park, a kabuki theater to enjoy traditional Japanese performances, and a beer factory with full brewery tours and Asahi samples. Read on for the six most entertaining Fukuoka attrations: 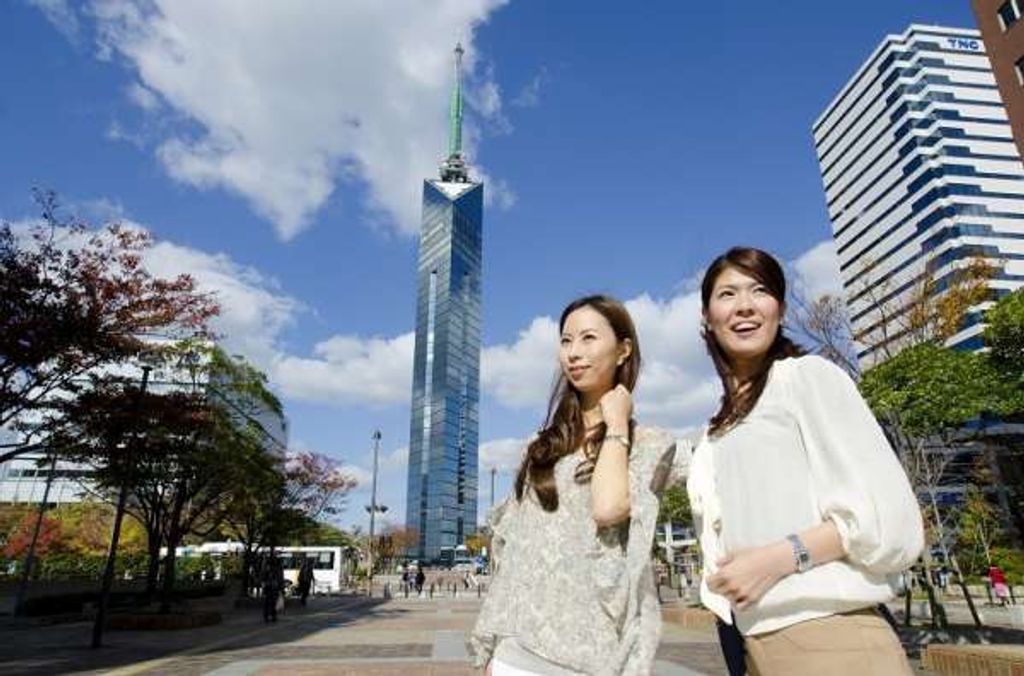 Fukuoka Tower is the tallest seaside tower in Japan at a height of 234m. Standing right by the shore, its sharp triangular exterior covered in 8000 half-mirrors make for a symbolic presence in Fukuoka. From the highest observation point at 123m above ground, there is a 360-degree grand panorama which spreads out with the streets of Fukuoka to the east including Hakata Station and Tenjin, the yacht harbor and the waterfront of Kaihin Park to the west, the lush green Sefuri Mountains to the south and to the north, there is Hakata Bay, Nokonoshima Island and Umi no Nakamichi. The horizon that seems to meld together the blue sky and the blue sea can only be seen at this seaside tower. The best time is the magic hour of sunset. As you see the sun sinking below, you can enjoy the wondrous scene of the car lights on the city highways and the beautiful nightscape of buildings.

Also known as the ideal spot for couples, there are popular areas such as the glass benches from where you can view the nightscape, the Lovers’ Compass in the center which is said to send any wishes and desires in the direction of the person you like, and a fence where you can attach a heart-shaped lock for eternal love. Also at the sky restaurant up at the 120m point known as Refuge, you can enjoy lunch and dinner within a glass-enclosed area, coffee and light snacks, and even a full-course dinner provided reservations are made up to the day before. Also, there are plenty of indoor facilities such as shops, a portrait corner and a commemorative photo service. And every year on May 3-5 and on Sports Day in October, there is a climb of the tower’s 577 stairs. Plus, throughout the year after sunset, the tower is illuminated in various ways depending on the season. 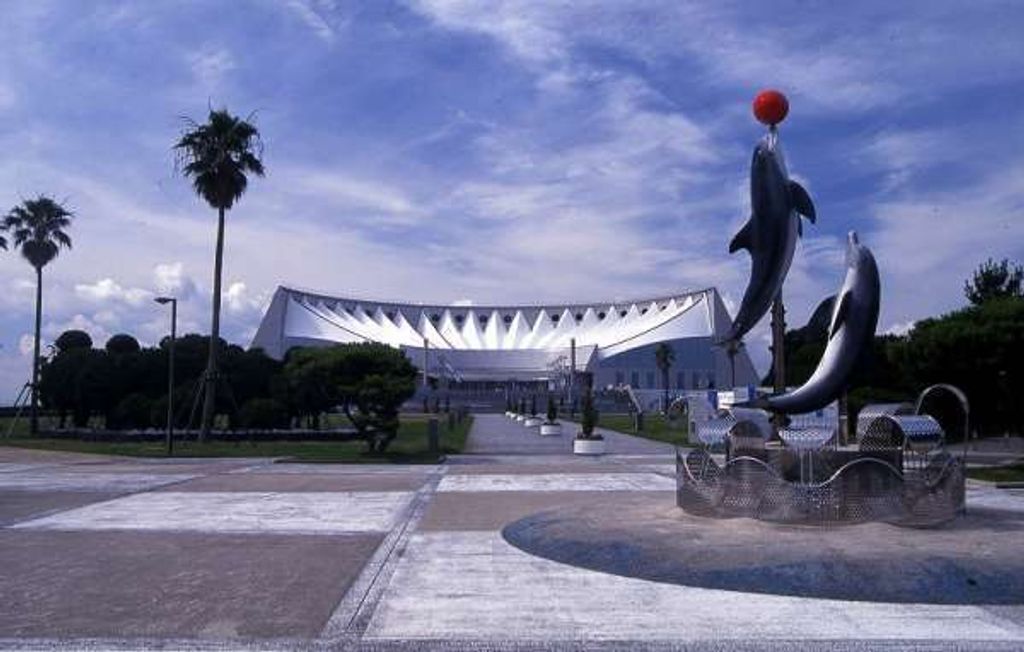 Marine World, which is situated at one corner of Uminonakamichi Seaside Park, has displays based on the theme of the warm Tsushima Current which features 30,000 animals from 450 species, and is an interesting science museum where you can learn about the sea through a variety of exhibition methods including video, music and underwater cameras. Inside the world-class Large Panoramic Water Tank, 150 examples of shark and rays from over 20 different species and huge schools of Japanese sardine among other fish can be spectacularly seen. Underwater divers feeding the fish can also be seen. The Ceiling Tank, which measures 2.7m in diameter and 10m in height, goes from the 2nd to the 3rd floor, and the Tunnel Tank has colorful tropical fish which can be seen from below. At the Exploration Beach, you can actually handle animals such as starfish and sea urchins. On Sea Animal Island, you can leisurely view the sight of swimming dolphins and seals. There is also the Dolphin & Seal Show which is the most popular show in Marine World. At the all-weather Marine Theater with the backdrop of the blue waters of Hakata Bay, you can see the daily repeated 30-minute show of dolphins making their high jumps and jumps through rings while the seals perform their humorous antics.

There are enjoyable interactive programs such as the Backyard Tour which lets you see the back of the water tanks just like the staff of the aquarium, the feedings of seals and sea lions, and the Dolphin Touch where you can get in actual contact with dolphins. There are also a restaurant and a café provided, with the popular Marine World Restaurant providing the view of swimming dolphins as you enjoy your meal. Also, if you happen to visit Marine World on your birthday or even in the month of your birth, there are a variety of special benefits so please bring some proof of your birthday. 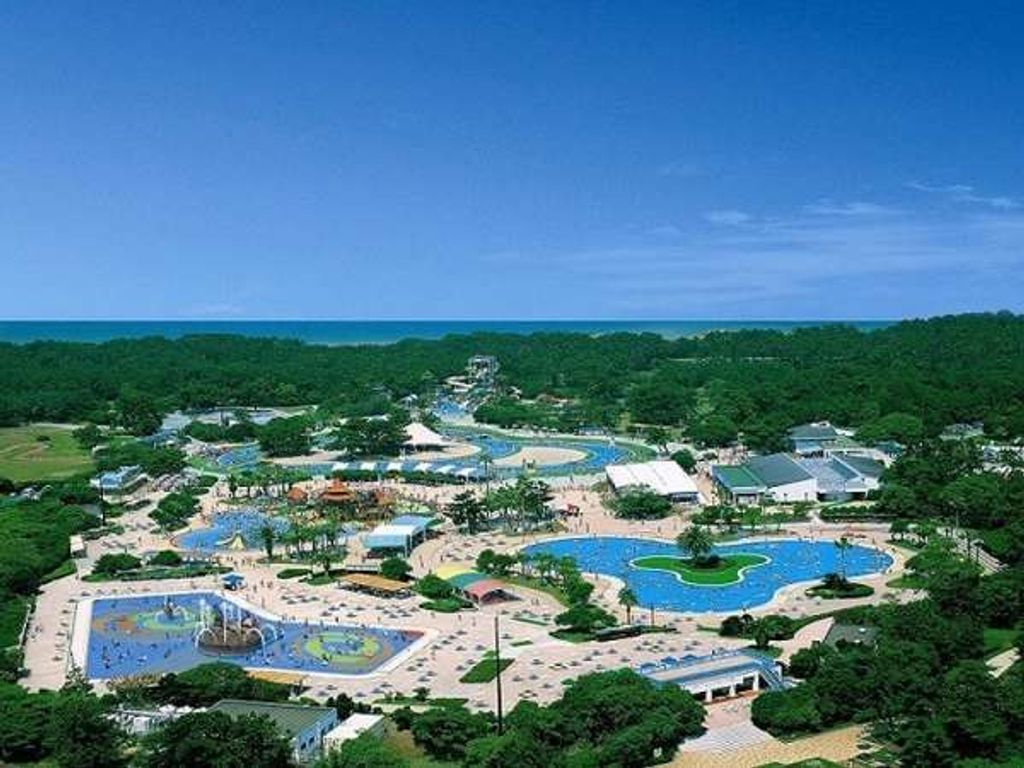 The huge 540ha nationally-managed park is sandwiched between the Genkai Sea and Hakata Bay, and is divided into 7 areas: the Flower Area, the Grass Area, the Natural Experience Area, the Amusement Area, the Hakata Bay Area, the Genkai Sea Area and the Resort Area. The park has brought together plenty of leisure facilities to enjoy things such as getting in touch with the flora and fauna throughout the four seasons, sports, pools and other amusements. Throughout the year, there are various events. In the spring, there is the Uminonakamichi Flower Picnic, a festival of flowers including cherry blossoms and tulips, and in the early summer and fall, there is the Uminaka Rose Festival. At the Sunshine Pool which is the largest pool in western Japan, there are 6 pools with water slides that can be enjoyed during the summer. In the fall, there is the Uminaka Flower Festival which features a large cosmos field, and in the winter, there is Uminaka Christmas Candle Night with 10,000 lit candles.

The park has a myriad of facilities for children and adults to enjoy. For instance, there is Day Campground where you can enjoy a barbeque without needing to bring anything while admiring the ocean, the Animal Forest with 20 different types of animals where the kids can pet squirrel monkeys and capybaras, and an area where they can ride on go-karts and mini SL trains. There is also the popular Wonder World with its giant trampoline and roller slide, Marine World which is an aquarium with a hit dolphin show and 450 species of fish, and the resort hotel, The Luigans, where every room has an ocean view. To navigate through the huge park, there is the park train or bicycles can be rented. 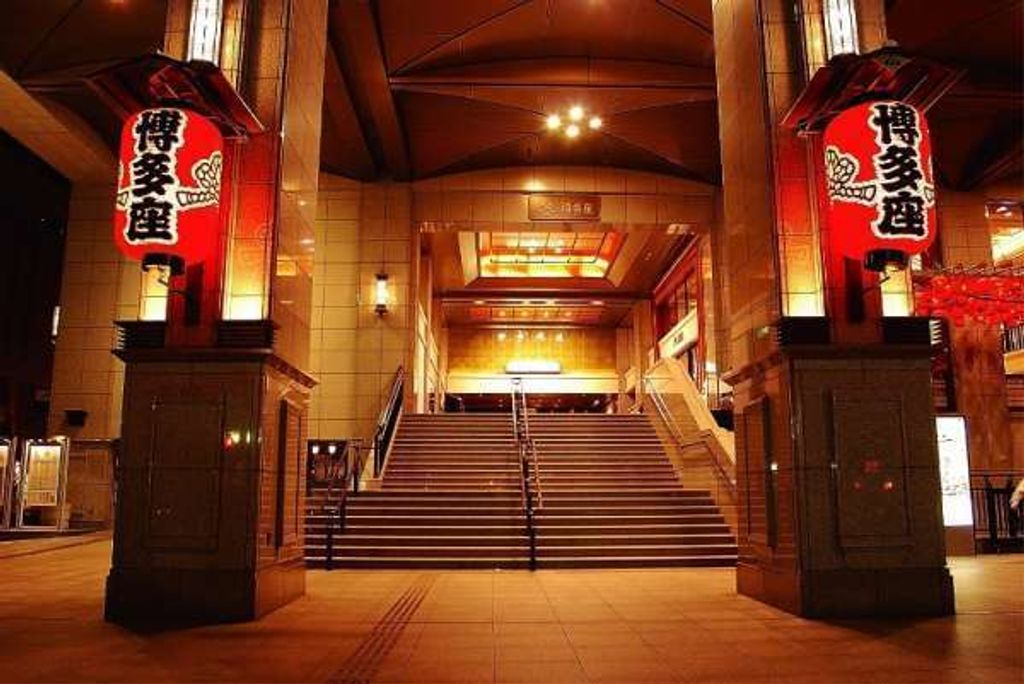 Much-talked about plays, kabuki, musicals and other projects are shown on a monthly basis at one of Kyushu’s foremost theaters that has 3 floors of seating boasting a total capacity of 1500 for which advance tickets are sold online. The huge 20m x 21m stage can handle plays of any genre with many stage settings, and when there is a kabuki performance, the elevated passageway known as a hanamichi extends from the left side of the stage (as seen from the audience) and through the seats, and there are wires and hooks for performers to fly over the audience. The theater is also designed so that part of the 1st-floor seating can be slid under to provide an orchestra pit for musicals and concerts. Hakata-za really wants to impress you with its luxurious seating and performance-friendly design.

There is a multitude of services at Hakata-za, including a service for storage of large luggage at the entrance and free lockers. There are free rentals of hearing aids, lap blankets and seat cushions along with rentals of opera glasses for a fee. Also, during kabuki performances, English-language pamphlets with a description of the historical background, cast of characters and a story outline is provided. There is also a restaurant serving genuine kaiseki cuisine using seasonal ingredients which can be reserved in advance before the performance. Box lunches that are available before performances and during intermissions can be eaten at your seat. Since these lunches are popular, they tend to sell out quickly so purchasing them before the performance begins is suggested. There are also a café and a gift shop selling Hakata-za’s original confections, souvenirs and special goods specific to the performance. 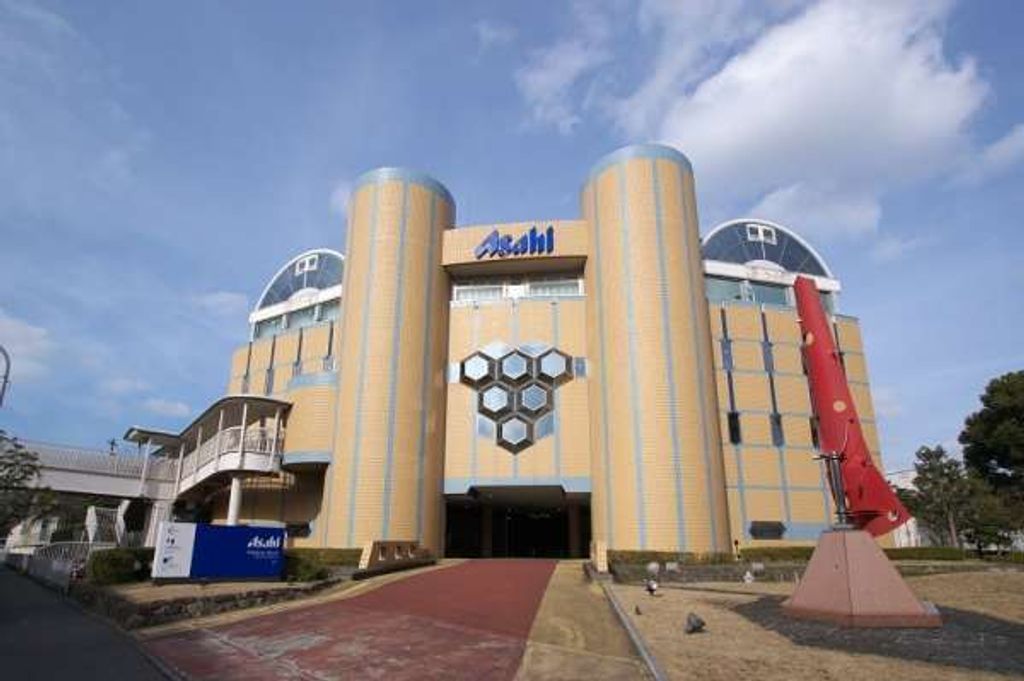 The brewery is easily accessible after a 3-minute walk from Takeshita Station, just one stop away from Hakata Station. A factory that has introduced the largest solar generator in a domestic brewery, the beer which is made here is shipped to all parts of Kyushu, Yamaguchi Prefecture, the western part of Hiroshima Prefecture and South Korea. The 60-minute tour is on a reservation system which is done in 3 languages: Japanese, English and Korean (the 90-minute Japanese tour includes a video presentation), and prior reservations by phone is necessary. With your guide, you will actually touch the main ingredients of beer in the form of malt and hops, tour Brewery Plaza where you will be introduced to everything from the training to the brewing/maturing of beer, and view the process of the removal of yeast from the mature beer in the filtration room. After seeing the finished product being bottled and canned on the line, you will learn about the solar generator at the Ecostation.

Following the tour, you can enjoy sampling fresh draft beer in the tasting area. You can sample up to 3 tumblers of 3 types of beer within a 20-minute period with Asahi’s famous Asahi Super Dry, Asahi Super Dry Black and Asahi Super Dry Premium which has a rich taste due to carefully selected ingredients and a lot of time and effort put into the brewing. Also, another popular feature is some of the beer being served ice-cold through the Extra Cold server that is set at temperatures ranging from -2 to 0 degrees C. For people who can’t drink beer, soft drinks are also served. And original goods can be purchased at the gift shop. For those who can’t get enough of the beer, the adjoining Asahi Beer Garden is recommended for its fresh beer accompanying Jingiskan cuisine. 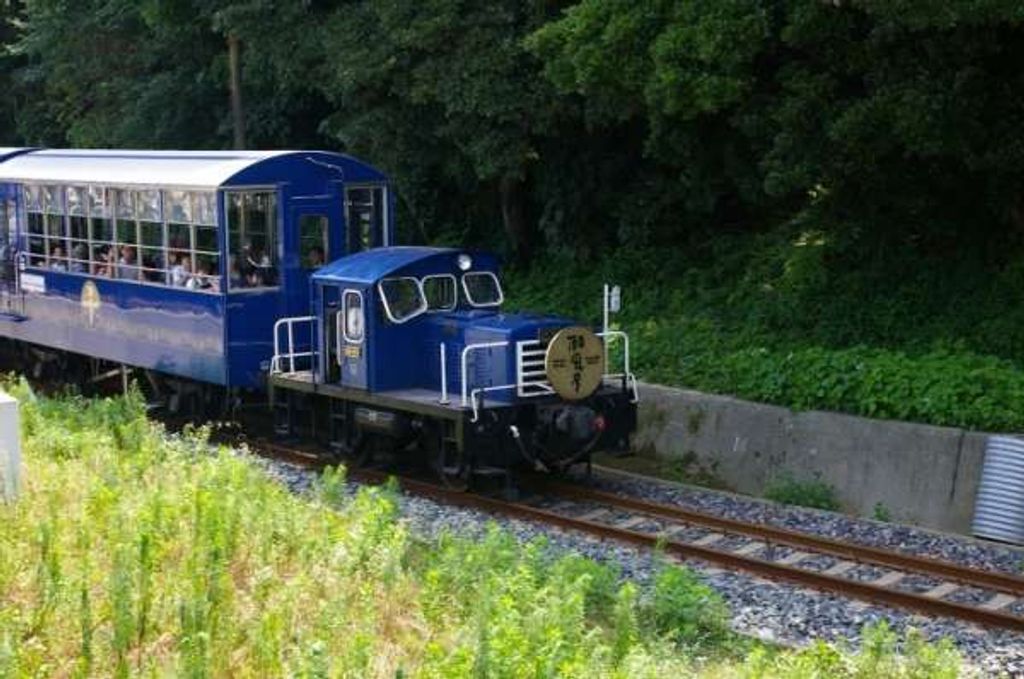 The Shiokaze which is Japan’s most leisurely-running trolley train is a sightseeing train that utilizes an abandoned track that once was used to transport limestone and cement. From the retro port town of Moji, the train runs slowly along the coastline and heads up to Mekari District 2.1km away, linking 4 stations. This blue retro train which has the image of the sea breeze is made up of two diesel engines and two passenger cars, and runs for about 10 minutes at a speed of 15km/h while feeling the sea breeze. In a day, it makes 11 runs. The train has a nostalgic atmosphere with its wooden seats and tables, and there are many 4-person box seats for families along with large windows from which you can enjoy the scene of yachts and ships going back and forth through the Kanmon Strait. The departure point of Moji Port was opened in 1889 and flourished both as a trading port and as a port town with many buildings and historic sites that haven’t changed since those days so it is a community that retains that retro atmosphere. The final destination of Mekari District has been designated as part of Seto Inland Sea National Park where the grand view of the strait widens. It is a lushly natural place and scenic spot where you can view the strait and Kanmon Bridge. You will want to take a stroll on the promenade and through the park.

The Kanmon Strait Clover Ticket is a reasonable ticket that can get you around the Kanmon Strait. It will get you on board the Shiokaze and then you can make your way from Kyushu to Honshu on foot through the Kanmon Jindo Tunnel after which you can get on the Sanden Bus from Mimosuso River to Karato. Then, you can get on board the Kanmon Kisen ship from Shimonoseki-Karato back to Moji Port. You can enjoy your trip at your own pace while touring the spots along the way.