Nikko is a city in the mountains, surrounded by nature, temples, and shrines. Famous monkeys, one of the largest wooden buildings in Japan, sacred trees, and an array of mountainous scenic views make up the backdrop. Here are some of the most interesting shrines and temples in Nikko: 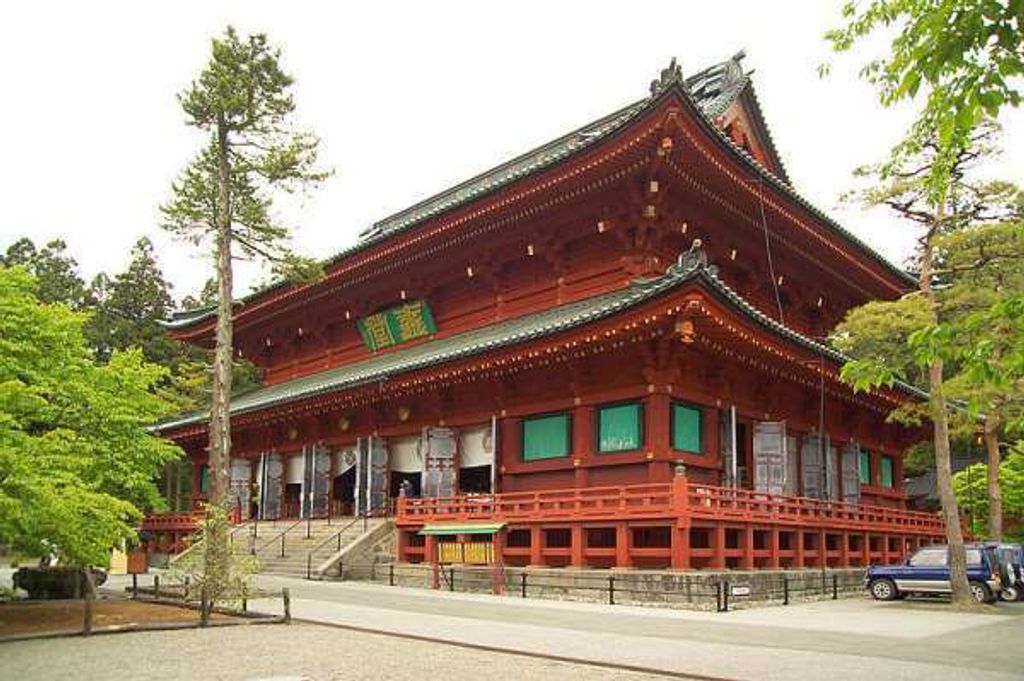 Nikko-zan Rinnoji is a collective name for a number of halls and pagodas as well as 15 sub temples. The center of Rinnoji is the main hall, Sanbutsudo, which is the largest wooden building in East Japan. Inside the hall are three enormous shiny golden Buddha statues. The main hall (Sanbutsudo) is currently undergoing “the great repair of the Heisei period” but visitors can view the interior of the building and pray to the three Buddha statues during the construction period despite the repair work that is going on.

Gohanshiki ceremony is held on April 2 every year. It starts out by sharing offerings with the visitors. At the ceremony, the participators are forced to eat a huge bowl of rice. It is said that the ceremony viewers will be free of any illness and that they receive luck that causes their family to prosper. In August, torchlight Noh performance is held. At this event, Noh and Kyogen plays are performed outdoors during the night while lighting the stage with bonfire torches. Noh and Kyogen are designated as intangible cultural properties and are the world’s oldest forms of theatrical art: Noh performance combines dance, acting and music while Kyogen is a theatrical performance consisting of spoken dialog and stylized movements. A popular event held annually on New Year’s Eve is the Saitodaigomaku ceremony. Starting at 11:45 p.m., special firewood carrying people’s wishes are burned for about 50 minutes; people standing around the bonfire pray for good luck and get their bad luck of the coming year cast away by the fire and the rising smoke. While visitors should dress warmly since it is quite cold, you can also borrow small blankets from the temple. The Shoyoen garden in the temple grounds is known as a great spot for viewing fall foliage. The trees are lit up every year during the fall foliage season. The garden stretches long from the east to the west with a distant view of Mount Nantai and Mount Nyoho; stroll around the pond and enjoy the dynamic views created by employing a “borrowed view” landscape gardening technique which takes in even the views of the mountains in the distance as the garden’s background. 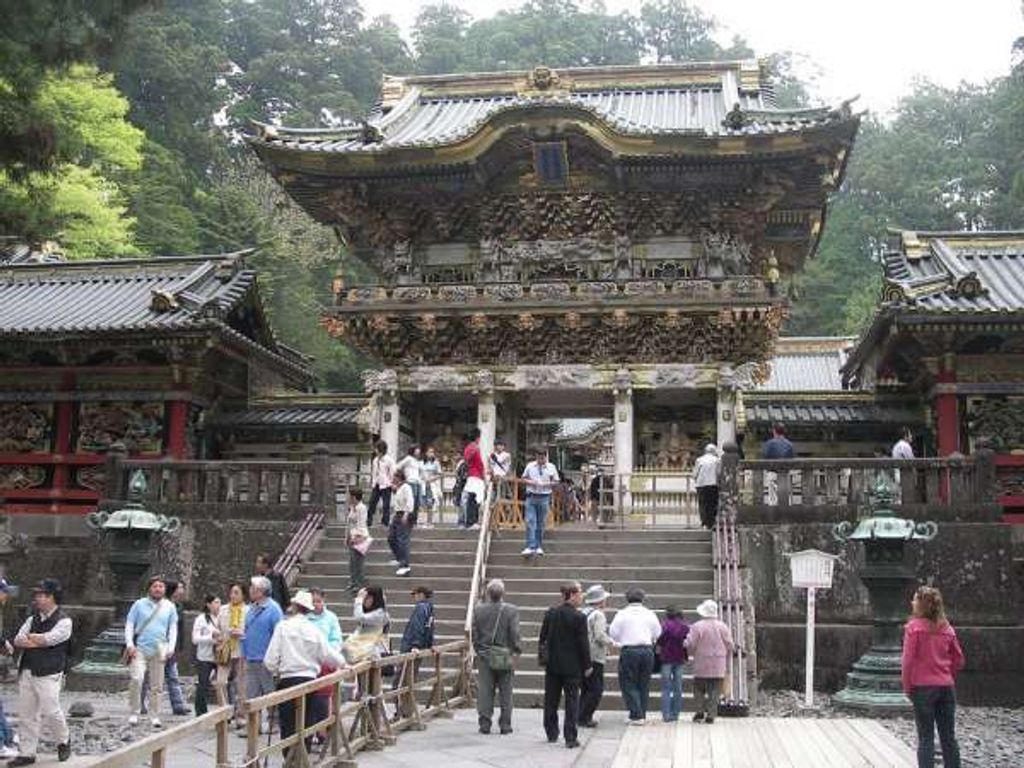 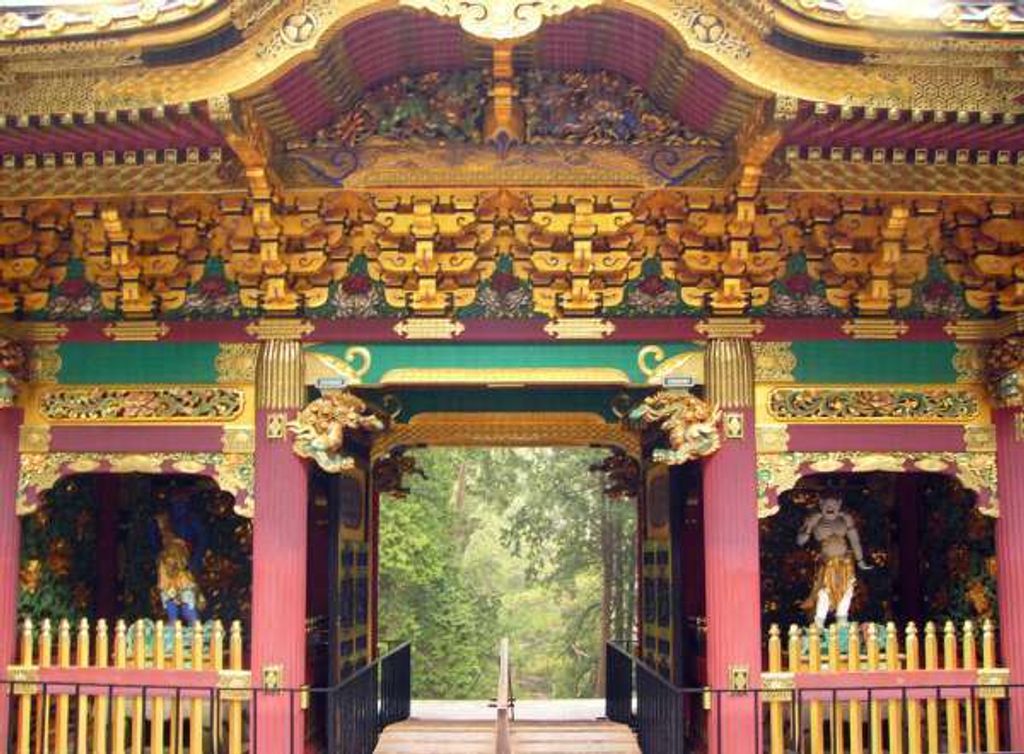 Taiyuinbyo is the grave of the third Shogun (military governor) of the Tokugawa dynasty, Iemitsu Tokugawa. He truly respected his grandfather Ieyasu Tokugawa and wrote in his will that he will “continue to serve Ieyasu even in death.”

Following his death, Iemitsu was given the name Taiyuin from the Emperor. Taiyuin refers to a person that has accomplished great political achievements. At Taiyuinbyo, the view changes each time you pass through one of the five large or small gates; people say that you feel as though you are rising up to heaven when you walk through the path to the main sanctuary from the Niomon gate, or the two guardian Deva gate. After passing through the Deva gate, the entrance of Taiyuin, a large gate comes into view. This is the Nitenmon gate. The Nitenmon gate features two of the four Indian guardian deities that were incorporated into Buddhism: Dhrtarastra and Virupaksa. Placed in the background are the Wind God and the Thunder God (the most familiar natural phenomena, strong wind and thunder, that have been deified). After passing through the Nitenmon gate and climbing up to the top of the stone steps, you will see hanging lamps everywhere. The view from here is likened to the view from heaven.

The first entrance to the grave is the Yaksha gate. Your eyes will be attracted to the vivid colors of the statues. In total four Yaksha (Indian guardian deities/demonic warriors incorporated into Buddhism) are placed at the front and the back on the right and the left to protect the grave. At the front of the Hall of Worship after passing through the Yaksha gate is the Chinese-style gate which is located at the center of Taiyuinbyo. Though small in size, the entire gate is covered with detailed carvings and the gate’s gold and white based colors are profoundly elegant. The walls on the side of the gate are covered entirely with carvings of pigeons. Some say that the pigeon is a symbol of the relationship between Ieyasu and Iemitsu. To get to the grave of Iemitsu located at the very back of Taiyuinbyo behind the main hall, one must pass through the Kokamon gate. This breathtaking structure is also called Ryugumon (dragon palace style gate) because elements of Chinese architectural styles were incorporated into its design. When you look up while passing through the gate, you will see heavenly maidens on the ceiling; they symbolize that you are about to enter a sanctuary. Visitors cannot pass through Kokamon as it is not opened to the public.

Following his death, Iemitsu was given the name Taiyuin from the Emperor. Taiyuin refers to a person that has accomplished great political achievements. At Taiyuinbyo, the view changes each time you pass through one of the five large or small gates; people say that you feel as though you are rising up to heaven when you walk through the path to the main sanctuary from the Niomon gate, or the two guardian Deva gate. After passing through the Deva gate, the entrance of Taiyuin, a large gate comes into view. This is the Nitenmon gate. The Nitenmon gate features two of the four Indian guardian deities that were incorporated into Buddhism: Dhrtarastra and Virupaksa. Placed in the background are the Wind God and the Thunder God (the most familiar natural phenomena, strong wind and thunder, that have been deified). After passing through the Nitenmon gate and climbing up to the top of the stone steps, you will see hanging lamps everywhere. The view from here is likened to the view from heaven. 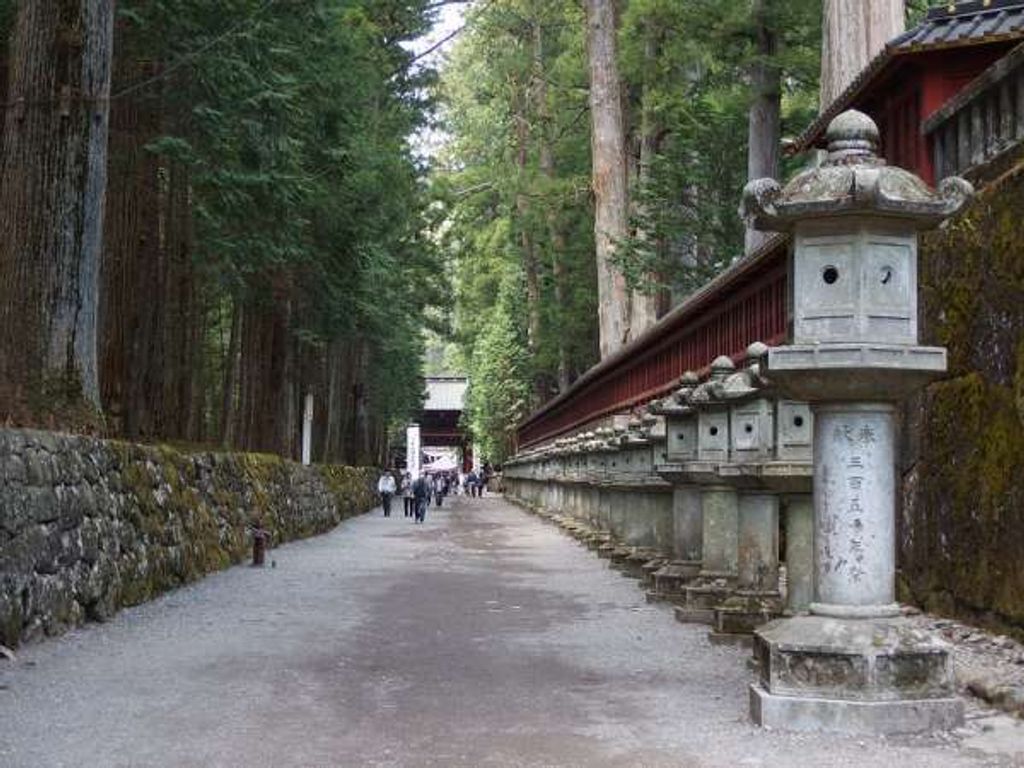 The shrine grounds, which are only second to Mie Prefecture’s Ise Shrine in size, contain sacred cedar trees which are said to be 1000 years old, and evoke a grandeur with structures such as the main hall and front hall which are among the oldest buildings on Mt. Nikko. Aside from the main shrine, there is Chugushi Shrine north of Lake Chuzenji and a rear shrine on the top of Mt. Nantai. You can get an air that is different when compared to the adjacent Tosho-gu. There is Omotesando Road that connects Nishisando Road, which connects straight from the national highway, and Tosho-gu. Omotesando then splits into Uwashinmichi Road and Shimoshinmichi Road, with the cedar-lined paths giving that divine feeling. On Uwashinmichi, there are 37 stone lanterns that are lined up in an orderly pattern which makes for a popular road to the shrine. Within the shrine gardens, there is the Futara Reisen spring surrounded by large stones. Two streams feed into the spring, one of which (Yakushi Reisui) is from a cave on Mt. Korei. It’s said that drinking from that stream cures any eye diseases. The other stream is the famous water that pours into Tengusawa. It’s been called “The Fountain of Sake” since the quality of the water affects the production of sake. At the adjacent tea room “Azumaya”, you can try drinks that use this water. Right at the entrance, there is a copper lantern which has been called a ghost lantern. When it was lit up, it acted strangely so that the warriors assigned to guard the shrine attacked it, and the lantern has over 70 scars thus giving it its name.

There are many cedar trees that have been called sacred trees in Futarasan Shrine. Two of them share one root and stand up against one another so that they are called the husband-and-wife cedars (fuufu sugi), while another three sharing one root have been called the family cedars (oyako sugi). Another group of three cedars have been compared to a goddess descending from Mt. Nyohou, and then just past the large torii gate at the front to the right are the marriage cedars. Watching these cedar trees stretch out straight into Heaven possesses an overwhelming power.