Taking a trip across Japan? If you a travelling to Hiroshima, and want to stop off somewhere interesting along the way, even if it is just to break up the long journey, then we recommened a half day trip to Okayama. An incredible castle, and one of the most famous gardens in Japan are definitely worth a visit. Here are four Okayama attractions: 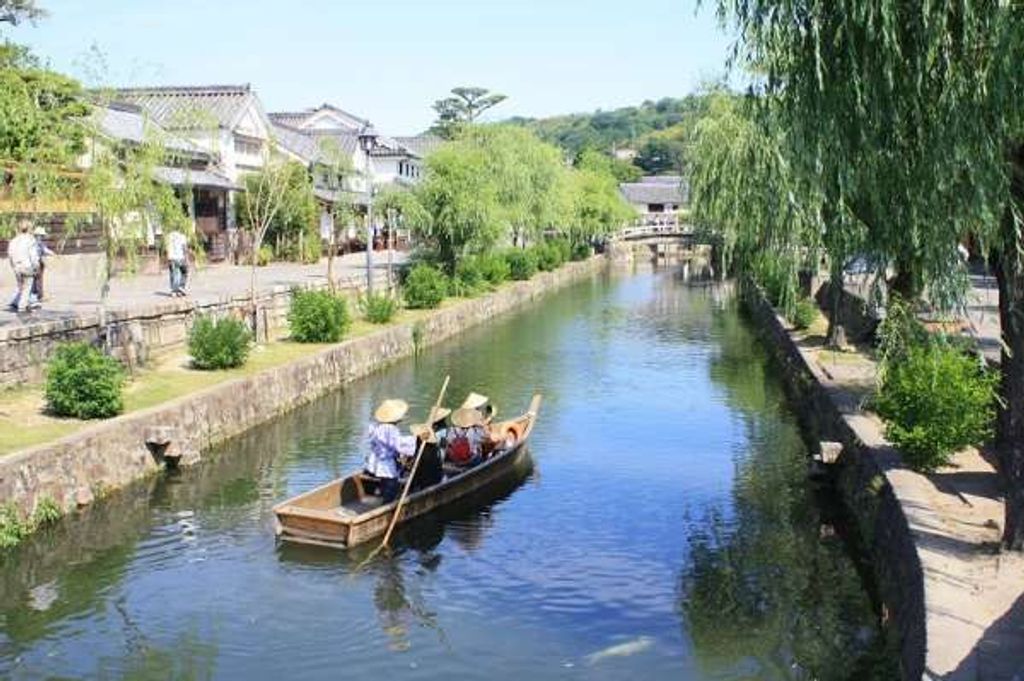 The Kurashiki Bikan Historical Quarter began flourishing in 1642 when it became directly controlled by the Edo shogunate. Along the banks of the Kurashiki River, the area came alive as a distribution center for rice harvested in the surrounding parts, and it developed as a center of commerce. One characteristic of the quarter is the traditional Japanese architectural style through buildings erected in the white-walled kura warehouse style or the namako-kabe style. In the Meiji Era, the quarter began to take on an additional Western architectural flavor with modern museums of art and buildings, and it developed into a townscape with a distinct atmosphere. Along the Kurashiki River which is in the center of town, white-walled buildings stand in a row and during the green seasons, the contrast with the willow trees along the river is outstanding. In the Bikan Quarter, riverboats also operate so that visitors can get a different view of the townscape from the river. The area is lit up until 10 p.m. at night so that it is enveloped in a calm atmosphere which differs from that during the day.

Even today, there are many people who live in the quarter. In the Honmachi area that is only a block away from the Kurashiki River, old residences and merchant houses have been refurbished to become establishments such as lively cafes, galleries and izakayas. Also, starting with the Ohara Museum of Art which owns famous world-class paintings, there are numerous cultural facilities such as the Kurashiki Archaeological Museum and the Kurashiki Museum of Folkcraft. Kurashiki Ivy Square, which was built from an old spinning mill, is a multi-complex facility centering on a hotel. Within its attractive ivy-covered red-brick grounds, you can also take part in pottery workshops, and during the summers only, a beer garden opens up in the courtyard. The square is popular for its open atmosphere among the classical buildings. This quarter which strikes a superb balance between East and West brings memories of the past as you stroll through it but it also has the unique attraction of being able to enjoy the current era. 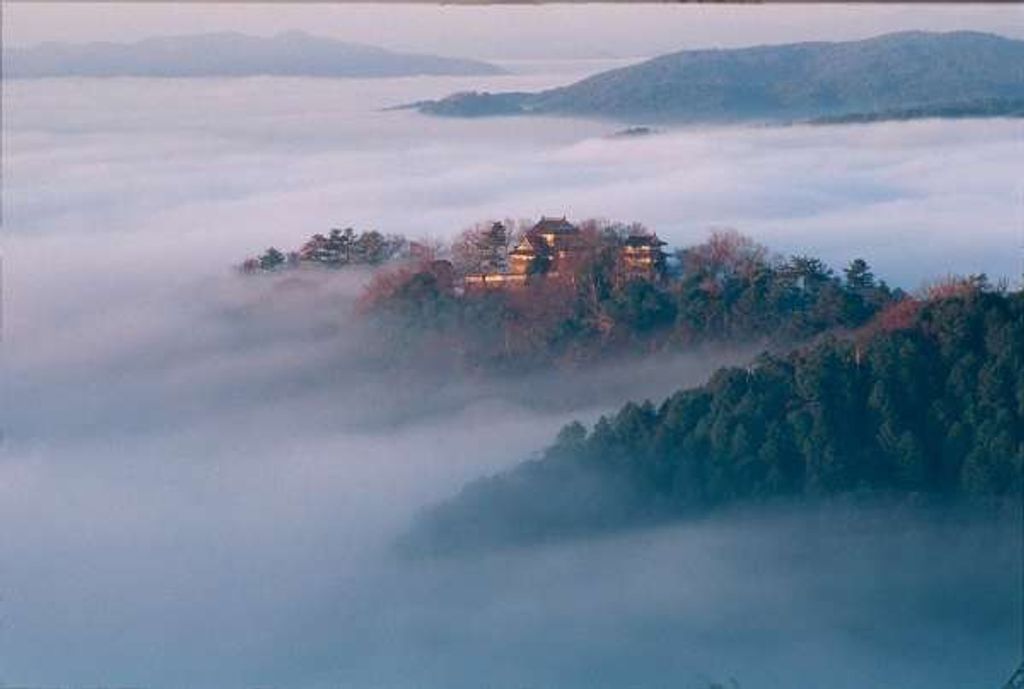 Bicchu Matsuyama Castle which has its origins in the Kamakura Era was restored over 3 years in 1683 with a castle keep that survives today. This place was a strategic point crossing the main east-west road, so during the Sengoku (Warring States) Era, there were violent struggles which resulted in rapid changes in the ownership of the castle. Access by car and bus is only up to the 8th level of the bellows-shaped mountain pass. The next 700 meters involves a 20-minute climb to the top. There are signs on the way to the castle which include boards telling you to “Take it easy and not be hasty” or “Take a breather” so that you can manage your fatigue. The stone walls at the remains of the Otemon Gate are amazing. In addition to the mountain itself being a natural fortress, these walls built on the natural bedrock that is over 10m high made up a famous impregnable castle. The 2-tier 2-floor independent keep is a small-scale structure, but it has plenty of presence atop the elaborate walls. Aside from the keep, the area that includes the Niju yagura turret and the mud wall makes for a castle which is very attractive for features such as the contrast between the white-plastered walls and the black wood paneling, the keep seen against the blue sky, and the bedrock which is enveloped in the fiery vermilion of the autumn trees.

Bicchu Matsuyama Castle is also famous as a castle among the sea of clouds. Entering by car at Mt. Gagyuu and heading up to the final destination of Bicchu Matsuyama Observation Point, you can see the sea of clouds from late September to early April in the early morning once the conditions for weather and temperature differences are met. In particular, in the early mornings between late October and early December, you can also anticipate thick fog so the sight of the castle floating above the sea of clouds is popular as a magical spot for taking pictures. 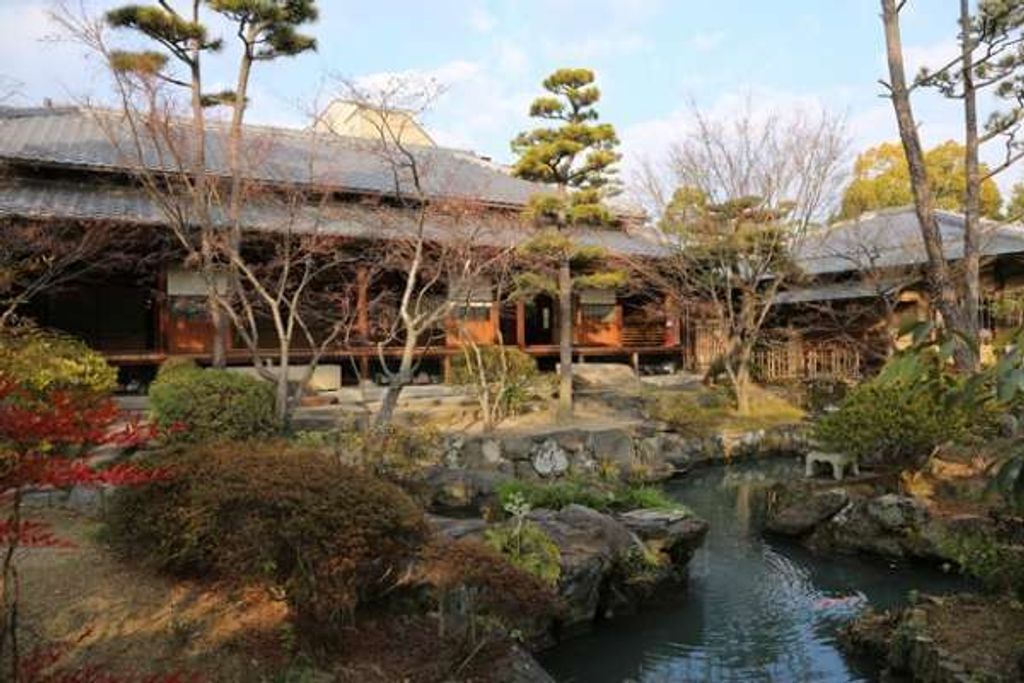 Businessman Magosaburo Ohara and painter Torajiro Kojima formed the basis behind the rich collection. Western paintings are a familiar sight now, but it is because of the numerous paintings that were gathered during a time when overseas information was not easy to come by that high interest was formed in Japan. The public feeling of “…providing a place to appreciate and research excellent works of art for young artists and general lovers of art…”has been passed down to the present day, and that collection has continued to develop while being reflected onto each generation. Many of the famous works of the world’s masters such as Monet, Renoir, Gauguin and Picasso along with the works of artists in the museum for the first time are on display. Among these masterpieces, the Ohara Museum of Art has The Annunciation by El Greco, only one of two of the artist’s works that are in Japan. This painting has received many visitors.

The museum has developed over the ages. In 1961, the Annex to display Western paintings of modern Japan and the Craft Art Gallery converted from a warehouse were opened. Afterwards, the Asiatic Art Gallery to exhibit Chinese art and the Torajiro Kojima Memorial Hall located within Kurashiki Ivy Square were opened so that the collection has grown and been replenished. Also, the water lilies in the pond by the Craft Art Gallery are extremely precious since they are the literal descendants of Claude Monet’s “Water Lilies” brought over from his personal garden in Giverny, France. They can be seen once a year between June and October during which they charm visitors to the museum with their lovely colors of gold and pink. 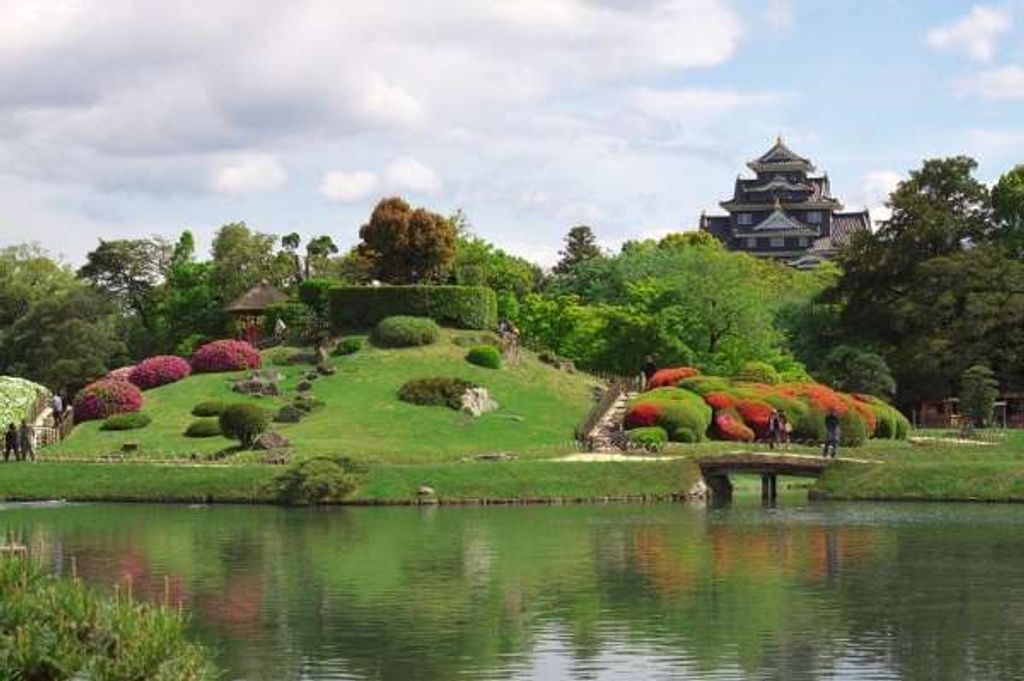 Okayama Koraku-en is one of Japan’s Three Great Gardens along with Kanazawa’s Kenroku-en and Mito’s Kairaku-en. Nationally designated as a Special Place of Scenic Beauty, it has even received 3 stars in the French guidebook The Michelin Green Guide and worldwide praise. There are a variety of structures everywhere within the garden such as the central Enyo-tei House that the daimyo used to welcome honored guests with Mt. Miyao and Okayama Castle in the background. The visitor can enjoy new views as he takes a walk through the garden with Yuishinzan Hill in the center along with a canal and pond at its foot.

The view from the most important building of Enyo-tei House has the most beautiful view from within the garden. Normally, the building is not open to the public except for two times in the spring and fall so you will want to visit then. Aside from the buildings, what is also not to be missed is the garden’s harmonious relationship with nature through the plants and Japanese cranes. In the spring, there are cherry blossoms and azaleas, Japanese iris and lotus in the summer, the fall colors, and camellia and plum in the winter so that seasonal scenery can be enjoyed throughout the year. At Koraku-en, Japanese cranes have been raised since the Edo Era. Although the program was halted temporarily, it has returned with the cranes being raised in cages. Annually on January 1st, several cranes are released into the wild with suitably excited visitors celebrating in an air of congratulations for the New Year.