Shiga is a little unkown gem hidden next to Kyoto. A large area with two definite climates. It is most famous for Lake Biwa, Japan's largest lake. Also in Shiga is Koka Ninja Village, the birthplace of ninja, and a must see place. Finally, the impressive Hikone Castle, a National Treasure, has fascinating views of both mountains and Lake Biwa, making it an excellent sightseeing spot: 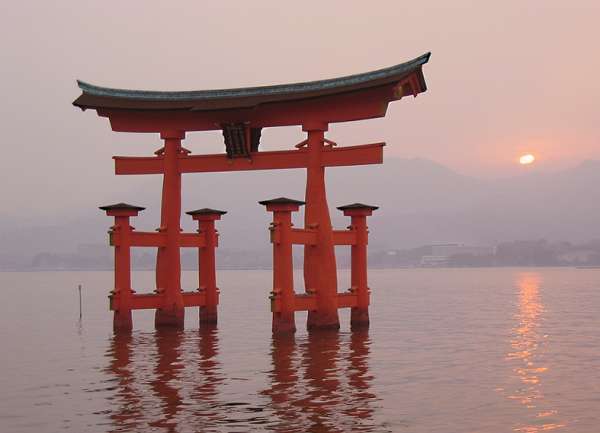 With a long vertical shape that cuts through Shiga Prefecture from north to south, Lake Biwa has a surface area of 669.23 sq. meters which makes it the largest lake in Japan. There are many historic tourist spots in the surrounding area. Within these, there is Mii-dera Temple which is famous for its pre-eminent cherry blossoms in the prefecture, Omi Jingu which is definitive of the Omi style of shrine architecture, Ishiyama-dera Temple which is connected with Murasaki Shikibu who wrote The Tale of Genji, and Hiyoshi Taisha Shrine which is popular for the autumn foliage and its nighttime illumination. In particular, Shirahige Shrine whose impressive large torii gate stands in the middle of Lake Biwa is also called Itsukushima Shrine of Omi and is visited by many worshipers.

Along with the historic tourist spots, there are also plenty of leisure spots where you can fully enjoy the nature around the lake. There are day-long cruises around Lake Biwa including the Lake Biwa Cruise where you can enjoy a trip with the family while having a meal on board. There is also Blume-no-Oka with a huge park, an animal farm and interactive workshops; Lake Biwa Valley where you can get a grand panoramic view of the lake; and lots of other facilities where you can experience the nature around the area. A drive around Lake Biwa is also recommended. With cherry blossoms and autumn leaves, there is overwhelming beauty throughout the four seasons at Lake Biwa. 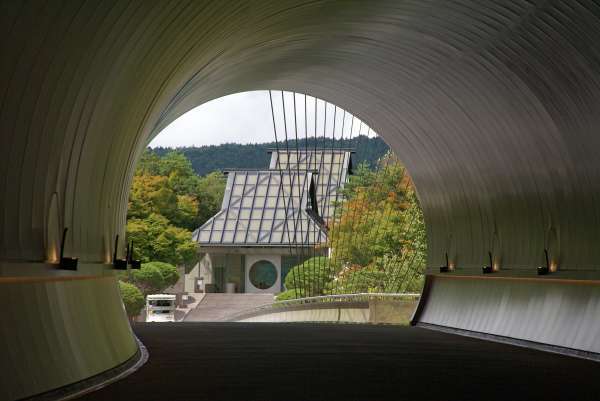 The Miho Museum is located in the lush green mountains of Shigaraki, Shiga Prefecture famous for its Shigaraki-yaki pottery. It was built in the style of Togenkyo (Shangri-la) for which the Chinese poet Tao Yuanming had written about, and getting away from the avenue of weeping cherries, through a silver tunnel and across the suspension bridge over a valley, you finally reach the entrance to the museum. At this museum, there is a collection of more than 2000 works of art from all over the world such as Egypt, Greece, Italy, the Middle East, China and finally Japan of which up to 250 of them are on display at any one time. Many of them have been designated as Important Cultural Properties, and as a private art museum, it boasts one of the most prominent collections in Japan. Along with the permanent display, there are also special seasonal exhibitions. There is also a museum shop and a restaurant that uses ingredients with no pesticides or chemical fertilizers so that you can spend an entire day there. Also, the glass-enclosed entrance is a novel design which was provided by the renowned I.M. Pei who designed the glass pyramid at The Louvre. The museum which was designed to merge with the surrounding nature seems to have also made the landscape a part of the art. This is a place where you can truly feel Mother Nature.

A museum with the theme of getting close to nature, the surrounding area is also one of the highlights of Miho Museum. Especially in the spring, the weeping cherry blossoms beautifully color the way to the museum. Entering the silvery tunnel, the pink of the brilliant cherry blossoms is well reflected. In addition, you can also enjoy the foliage of autumn. These two periods of cherry blossoms and fall colors are especially recommended for this exhaustively calculated fusion of beautiful nature and the museum. 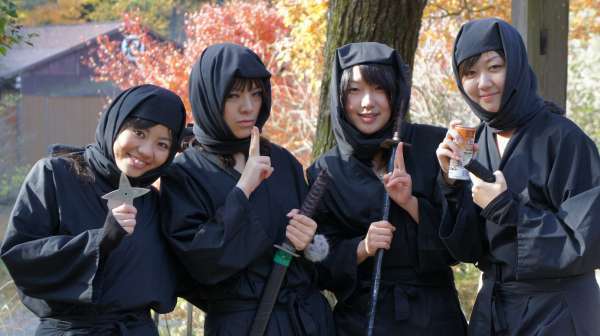 In Koka City, Shiga Prefecture, the birthplace of ninja, there is the large Koka Ninja Village at the foot of the Suzuka Mountains. Within the expansive grounds, there are facilities such as Shinobi Shrine, the Trap House, the Ninjutsu Museum and the Ninja Star Training Hall. The Koka Ninjutsu Museum is a museum of art that boasts the world’s largest amount of knowledge on ninjutsu. It not only displays information but also the tools of a ninja such as shuriken (ninja throwing stars). The museum is located in a thatched-roof house with the atmosphere of an old Japanese family home that is one of its charms. Also, the Trap House is the former home of a descendant of an actual Koka ninja where you can encounter various surprises. At the ninja dojo and the Ninja Star Training Hall, you can train like the real ninja. You can also rent out ninja outfits so you can have fun taking part as these warriors. Furthermore, Shinobi Shrine which is located in Ninja Village is a place which has enshrined ninja. It’s also famous for enshrining the largest image of Daikokuten in Japan (one of the Seven Lucky Gods who is the God of Wealth). Koka Ninja Village is a theme park for those die-hard ninja fans where you can enjoy yourself relating as a ninja warrior.

At Ninja Village, there are plenty of events such as the Ninja Championship Series and the Miss Kunoichi Contest to select the best female ninja. The nation’s ninja fans come from all over to see these competitions of real ninjutsu. In summer, many events such as the opening of the ninja dojo can be enjoyed by the entire family as they get in contact with the nature of Koka in Ninja Village. Not only ninja fans but folks who enjoy the outdoors are recommended to visit this tourist spot. 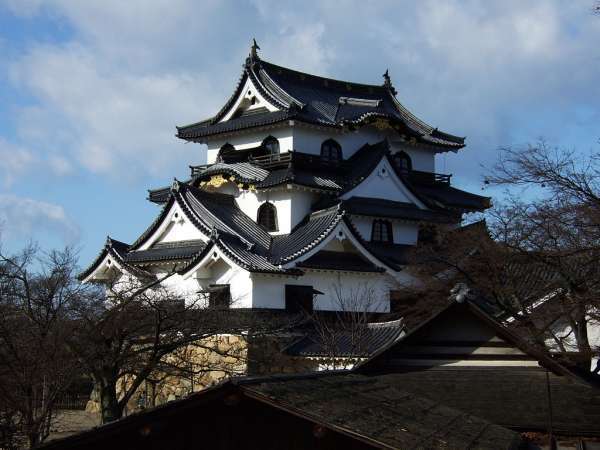 Since the establishment of Hikone Castle in the early Edo Era, it has been one of the few castles in Japan to have retained its beautiful appearance. Among the early modern castles, there are only 12 surviving original castle towers or keeps within the nation, and even within those, Hikone Castle has been selected as a National Treasure. The castle with its massive bearing is built upon the peak of Mt. Hikone as it looks over Shiga and the largest lake in the country, Lake Biwa.

The highlights of Hikone Castle are not limited to the castle tower and the watchtower alone. At the north side of the castle, there is Genkyu-en, a Japanese-style garden with a path built around a pond. The garden has been built to recreate The Eight Views of Omi showing the beauty of the former Omi Province (now Shiga Prefecture). During the season of autumn leaves, it is lit up and the surrounding trees beautifully melt into the surface of the large pond that is in the center of the garden. Genkyu-en is a famous garden that will evoke the splendor of Edo culture from that time. Also every September, there is the Mushi no Koe wo Kiku Kai (Celebration of Listening to Insects) and other events where you can fully enjoy Hikone Castle’s co-existence with nature.

Looking for an authentic travel experience in Kyoto but still stuck at home? No problem! Why don’t you start by taking a Virtual Tour for a moment’s escape from the mundane and chaos with our professional guides in Kyoto?

Toshi is a great tour guide. She has a lot of energy and is very knowledgable. I enjoyed going to the temples/shrines with Toshi. She would come up with some surprising details that made the visit so much more enjoyable. I would highly recommend Toshiyo as a guide.
read more

Richard took us on a 3 hour virtual tour as we “walked with him” through places or worship, spiritual sites, the historical district and more. He was engaging, thoughtful, knowledgeable, and fun. His ability to enable us to experience Kyoto like we were there was wonderful. The cultural insights fabulous. He surpassed our expectations of a virtual tour by a huge margin.
read more

I had an amazing time in Kyoto with Kiriko! It was a difficult time to plan a tour because a lot of places were closed due to the coronavirus, but she put together a great itinerary of cool places that I hadn't seen yet during my time in Kyoto. She even found the one nighttime temple illumination that was still open! After the sightseeing was finished she took me to a great restaurant to try K...
read more

“ A trully unique view of Japan ”

Our day with Richard was so outstanding that we are already planning a return trip to Japan, but only if he tags along for the whole trip. His knowledge of history is very impressive, his musings about Budhism are enlightening and his easy conversation with the locals makes anyone feel welcome in the hidden spots that no ordinary tourist would be able to reach; his disposition for a full day o...
read more

Kaori is fantastic. We are a family of 2 adults, 2 kids from HI. Kids are 8 and 6. Kaori adjusted skillfully to everyone's wishes and we got to see, learn and taste so much. If we go back to this area, we will hire her again! Wonderful experience.
read more

My family and I had a wonderful day in Kyoto thanks to Yumiko. She was very knowledgeable, caring, charismatic, and fluent in english. We did our research, I let her know where we wanted to visit and she set up the most efficient route for us, saving us a lot of time. After the tour, she gave us a hand written list of places that she suggested to research and go if interested. I would recommend...
read more

Mana arrived early and was very flexible as we changed some plans because of the rain and closures. She provided us with a fascinating day and we saw a lot - Byodoin Temple, shrines, a textile centre, and she even helped us find a restaurant where one of our party could eat GF food. Her knowledge of Kyoto and environs, transport and culture is very good. Thank you Mana for a wonderful day! Helen a...
read more

Toshiyo was very knowledgeable of the Osaka area. With several places closed she was still able to provide a full day of visiting various sites.
read more

“ Do not hestitiate to book a prviate taxi tour with Hiroshi! ”

My partner and I booked a private tour with Hiroshi to see the following sites; Kinkaku-ji Temple, Ryoan-ji Temple, Tenryu-ji Temple, Bamboo forest of Arashiyama, Otagi Nenbutsu-ji Temple and Shimogamo-Jinja Shrine. I have only good things to say about Hiroshi and the tour. His knowledge and insight of the temples and shrines provided an extra dimension to what we saw that was invaluable. He w...
read more