There are seventeen World Heritage Sites spread across Kyoto Prefecture, we have selected four of the best. They include the highest wooden pagoda in Japan, some of the best craftmanship of Buddhist imagary, and some stunning ponds and gardens. Read on for more information about four excellent World Heritage temples in Kyoto: 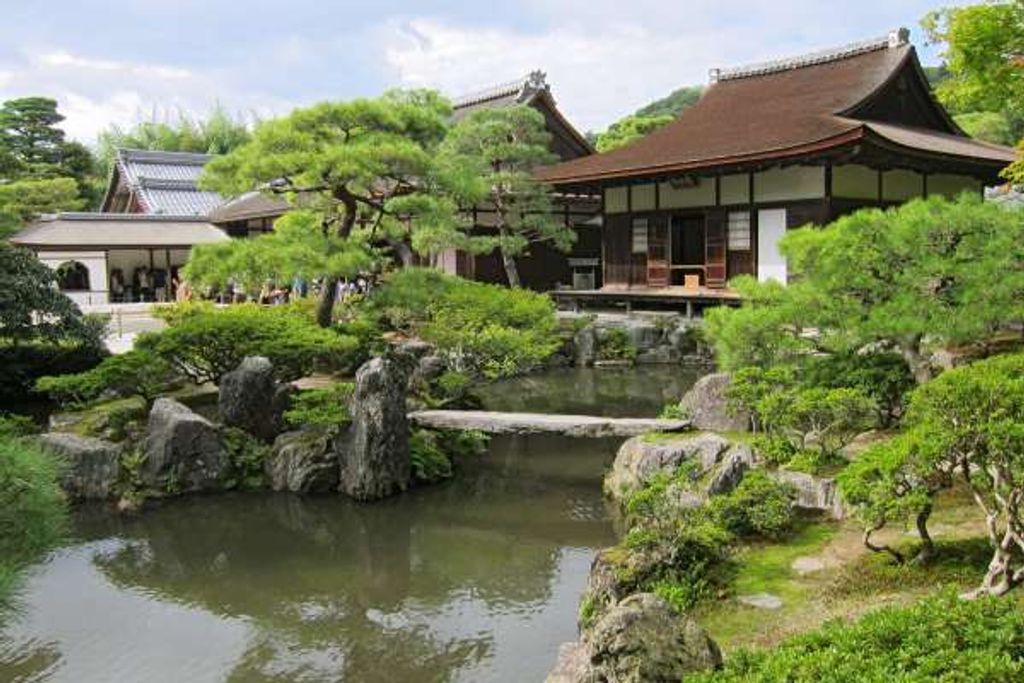 Beyond the main gate of Ginkakuji, proceeding further inside is the Kannon-den, also called the Silver Pavilion. This has been designated a national treasure; the Silver Pavilion is also a building that preserves the hallmarks of the culture of the Muromachi Period.

It is said that the Muromachi period, in which Ginkakuji was built, was an age that blended the aristocratic culture of samurai warriors, monks and court nobles. Much of the well-known Japanese traditional culture that came to be cherished by many people these days, such as tea ceremony, Noh drama, flower arranging, etc., comes from this period. The Silver Pavilion is a two-storied structure.The lower level is the Shinkuden, or the Pavilion of the Empty Mind, in a domestic style; the upper level, called Cho-onkaku, or “Pavilion of the Sound of the Tide,” is in the style of a Buddhist temple.  In front of that stretches a garden, a circuit-style strolling pond garden, also representative of this Higashiyama culture. Built in the center of the pond, the Kogetsudai, or “Moon-viewing Platform,” a mound made of sand; and the Ginshadan, or “Sea of Silver Sand,” are features. The Ginshadan, represented by waves of sand, with the sand in cylindrical rings around the mound of piled up sand, is said to have been built with the idea of the reflection of the moonlight in mind. 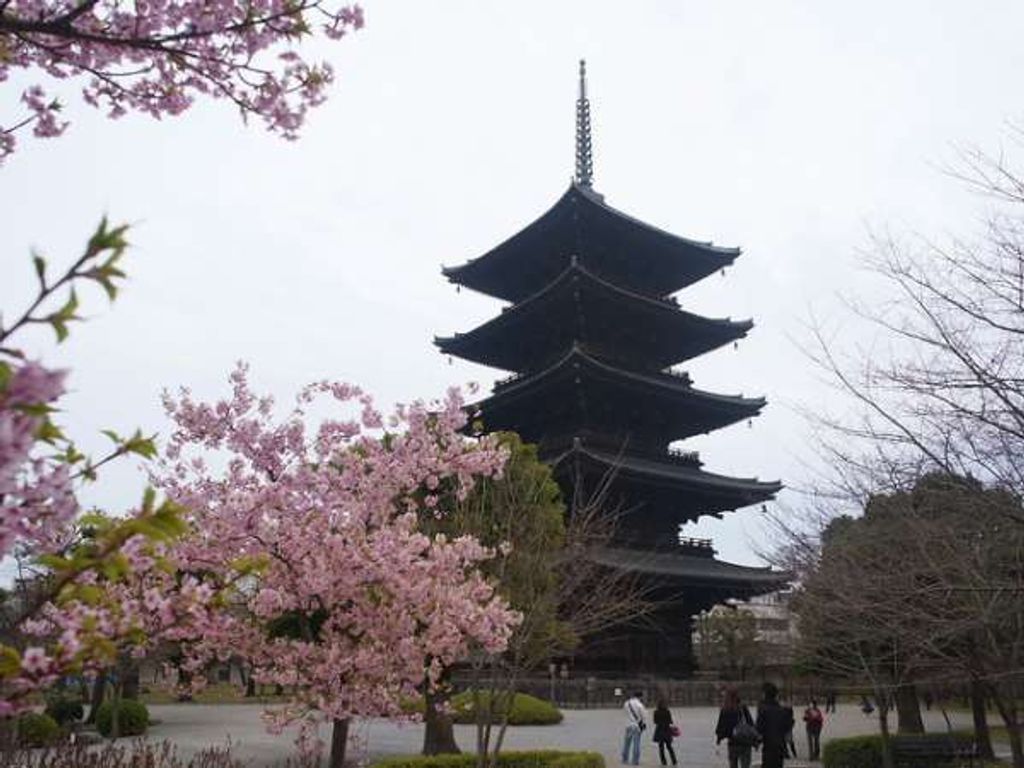 It is believed that Toji was built when Emperor Kanmu relocated to the ancient capital (the present day Kyoto, then called Heiankyo) in 794. It was later given to a monk named Kukai, who had returned to Japan after studying new Buddhism and Esoteric Buddhism in China, by the subsequently enthroned Emperor Saga. This is how Japan’s first Esoteric Buddhist temple came into existence. Since its establishment, it has continued to prosper as the headquarters of Esoteric Buddhist practices in Japan and still exists as one of the most visited sites of Kyoto. Must-see buildings at this temple are kodo (the Lecture Hall), kondo (the Main Hall) and the five-story pagoda.

The first building you want to view at Toji, a temple with more than 1,200 years of history, is the kodo (the Lecture Hall); it is the center of Toji as well as the central building for Esoteric Buddhist practices in Japan. At this temple, it is said that Kukai dedicated his life to spreading the teachings of Esoteric Buddhism. The three dimensional mandala designs express those teachings visually. Mandala designs, which express the teachings of Esoteric Buddhism in simple terms, were made into a three dimensional display by Kukai to add more reality to the teachings. With a statue of Dainichi Nyorai–a celestial Buddha which symbolizes the cosmos–at the center, the three dimensional mandala consisting of 21 Budda statues is an extraordinary dynamic display. An outstanding work of Esoteric Buddhism sculpture and surpassing the term spectacular, this group of Buddha statues is so powerful that it almost pulls you into another world. It is extremely rare that you can experience a feeling quite this strange and mysterious. Kondo (the Main Hall) at the south side of kodo is also definitely worth viewing. The building that was built in 796 burned down in 1486. It is said that the current kondo was completed in 1603 by the order of Hideyori Toyotomi. Enjoy the spectacular, dynamic architectural styles of the building such as the design of the roof with its lower part cut off at the front – a design also seen on the Hall of the Great Buddha of Todaiji temple. Visitors are allowed to view the interior of the kondo as well.

The five-story pagoda, also referred to as the landmark of Kyoto, is also a building you’d want to observe up close. The pagoda is approximately 55 meters high. It is considered to be the highest pagoda among the existing historical wooden pagodas. The interior features a space expressing Esoteric Buddhism in bright colors. 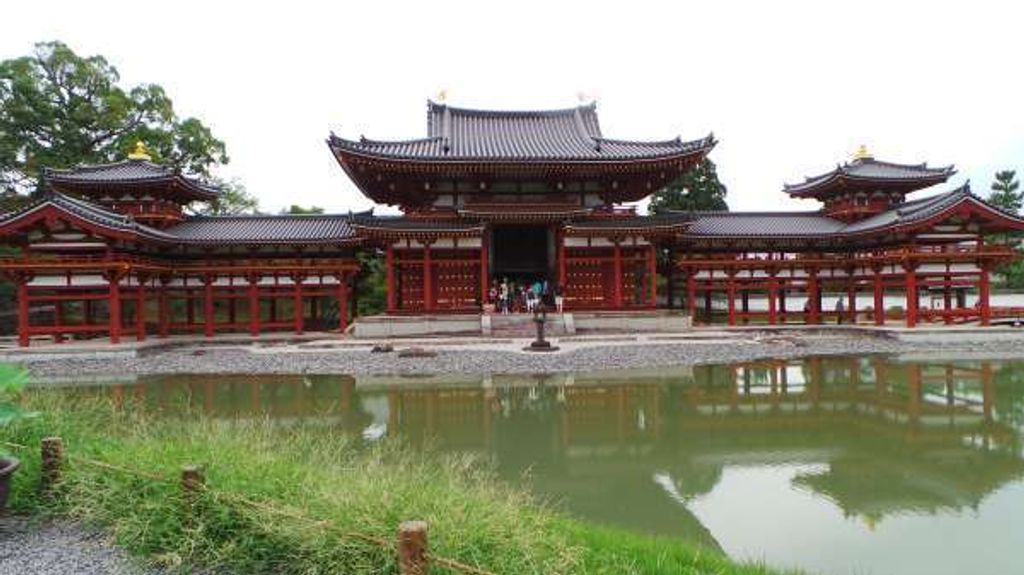 Byodoin temple was established in 1052 when an aristocrat named Yorimichi Fujiwara decided to turn his second house into a temple. The temple building and the Buddha statues created nearly 1,000 years ago have been collectively listed as a World Heritage site. Adding to its glory, the temple’s Phoenix Hall is featured on the Japanese 10 yen coin. The Phoenix Hall recently underwent nearly 2 years of restoration work including a roof replacement and re-coating of its exterior layer; the building has been restored brilliantly to the state it was at the time it was first built, bringing back the splendor of the Heian period (794 – 1185). Though the Phoenix Hall was built as a hall for containing the statue of Amitabha Tathagata, people began to call it the Phoenix Hall because the shape of the entire building resembles a phoenix with wings spread open, and also because the hall’s roof is decorated with a pair of copper phoenix statues. This valuable building attests to the glorious days of prosperity during the Heian period. Built on an island of a pond, the hall’s gorgeous reflection on the pond makes it appear as though it is a palace floating in the treasure pond of heaven. The people of the Heian period regarded the Phoenix Hall as heaven on earth.

The interior of the Phoenix Hall is filled with splendid National Cultural Assets. Sitting in the center is the statue of Amitabha Tathagata, a work of the best Buddhist image craftsman of the Heian period. Some playing instruments, some dancing, and others praying, at the upper part of the wall are the “52 Worshiping Bodhisattvas on Clouds” also crafted during the Heian period. On the walls are a drawing of heaven and a drawing depicting the 9 different levels that the spirits of the dead are directed to–according to the amount of virtue they have accumulated–by Amitabha Tathagata. The lights reflected by 66 copper bells hanging from the ceiling create an ethereal atmosphere in the hall. In spring, the flowers of 280 years old wisteria trees and azaleas add extra beauty to the temple grounds. 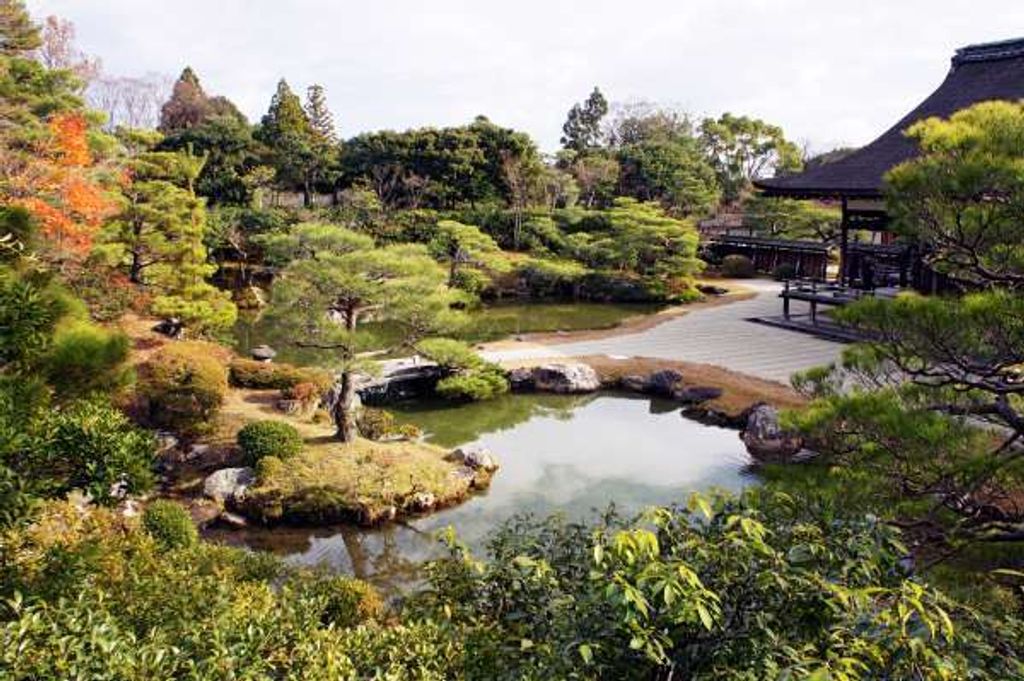 There are many National Treasures and Important Cultural Properties inside Ninna-ji. The Golden Hall that retains the notable atmosphere of a palace has been recognized as a National Treasure for its Heian Era style as it served as a residence for the Heian nobility. The Goei-do Hall which was constructed in the Momoyama style is an Important Cultural Property as is the temple’s five-storied pagoda, which, unlike other similar pagodas whose roofs usually get smaller the higher the building rises, has roofs that remain the same size, a characteristic of the Edo Era. As well, 14 other buildings have been recognized as Important Cultural Properties, a full experience of highlights of historical buildings. Beautiful paintings of Mahamayuri, Prince Shotoku and other figures on thefusuma sliding doors are incredible. Moreover, at the Reihokan, statues of the Amida Triad and Mahamayuri, the Buddhist text of the Sanjutcho Sasshi and other exhibits have been preserved as National Treasures and temple treasures.

The 500 late-blooming Omuro cherry trees at Ninna-ji are famous, and at a short height of 2-3 meters, they bloom as if they were creeping along the ground. With their deep colors and plump petals, the heavy cherry blossoms have been called otafuku sakura (homely woman cherries). Since these are late-blooming cherries, thesakura season at Ninna-ji in Kyoto is seen as the farewell look for the cherries, and the area is flooded with tourists during o-hanami (flower viewing) season.