The Nagasaki Atomic Bomb Museum and Peace Park are one of the main sightseeing spots when visiting the city of Nagasaki. As many of you know, this city along with Hiroshima was devastated by an atomic bomb at the end of World War II. Now, the museum and the park are although places with sobering atmospheres,  places where future generations can learn about history so that the annihilation of a city by weapons of mass destruction never happens again. It will be an educational trip for the whole family to see the Nagasaki Atomic Bomb Museum and the Peace Park. Below are the general details you'll need to know if you plan on going there.

The atomic bomb was dropped from a B-29 bomber on Nagasaki at 11:02 am on August 9, 1945. It was a plutonium implosion bomb named “Fat Man”. This was 3 days after another B-29 dropped a uranium gun-type bomb named “Little Boy” on Hiroshima city. Hiroshima is famous worldwide as the spot where an atomic bomb killed over 90,000 people. However, Nagasaki also suffered the loss of over 40,000 civilians in one fateful day. Thousands more suffered and died in the months and years to come from burns, injuries, radiation related illnesses, or malnutrition. These two bombings are the only instances where nuclear weapons have been used in war, up to this day.

You can see the horrors the atomic bombs caused at the Nagasaki Atomic Bomb Museum as well as the museum in Hiroshima. Survivors of the Nagasaki bombing are now few, with most over eighty years old. Some are still giving lectures about their experience in the museum’s lecture hall. We and the latter generations are quickly losing the chance to hear what they have to teach us about seeing the devastation of an atomic bomb first hand. The museum's exhibits are there to make sure we do not forget what dropping an atomic bomb means. This museum shows the city and culture of Nagasaki right before the bomb, the devastation the bomb caused, the restoration of the city, and documentary videos in four separate sections. The surviving photographs, documents, clothing, structures destroyed by the bomb are graphic and are no doubt upsetting to see. But it is imperative that we do see them. It’s a lesson for generations that do not know about war first hand, that peace is something we must strive for.

Nagasaki Peace Park is a park memorializing the atomic bombing of the city of Nagasaki. It’s a tranquil area created to pray for peace. The park is actually comprised of two parks and the Nagasaki Atomic Bomb Museum. In the center of this complex is the Hypocenter Park, marking the hypocenter of the atomic bomb dropped on August 9, 1945. It is depicted by a solemn black monolith. Near this monolith stands a broken pillar of the Urakami Cathedral, which used to stand a mere 500 meters from the epicenter. This cathedral has been reconstructed nearby after the war.

Uphill from the Hypocenter Park stands the aforementioned Nagasaki Atomic Bomb Museum. And next to it is the Memorial Hall. This beautiful piece of modern architecture is located mostly underground and uses water as it’s main motif. The hall commemorates those who perished due to the atomic bomb and is a place to pray for world peace. You can also leave your own messages or prayers for peace here. 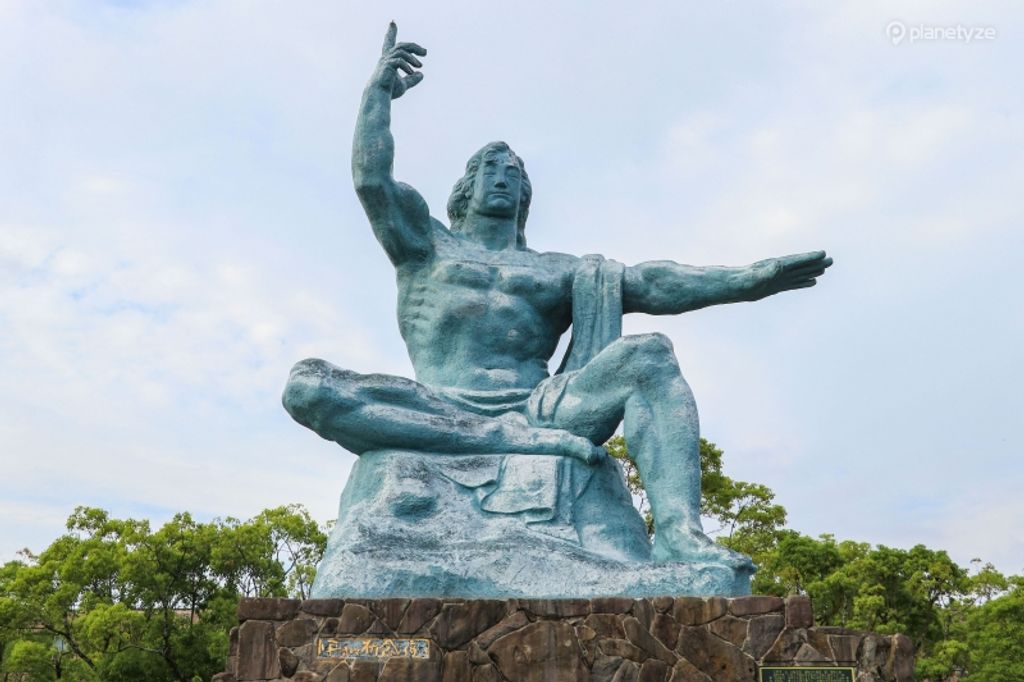 Across the street from Hypocenter Park is Memorial Park. The symbol of Peace Park, the Peace Statue, sits here. The arms and legs of the statue are positioned in a meaningful way as well as the features. The statue’s eyes are closed as if in prayer. The right arm points toward the sky where the atomic bomb was dropped from, warning us of the dangers of nuclear weapons. The left arm is extended as if towards eternal peace. The right leg is folded in the pose of meditation like a Buddha statue. And finally, the left leg is in the process of pushing itself up from the ground, telling us to stand up and help the world. Every year on the anniversary of the atomic bomb detonation, a memorial service is held at the foot of this statue. And everyday at exactly 11:02 am, the time of the detonation, a mournful song plays throughout the park. 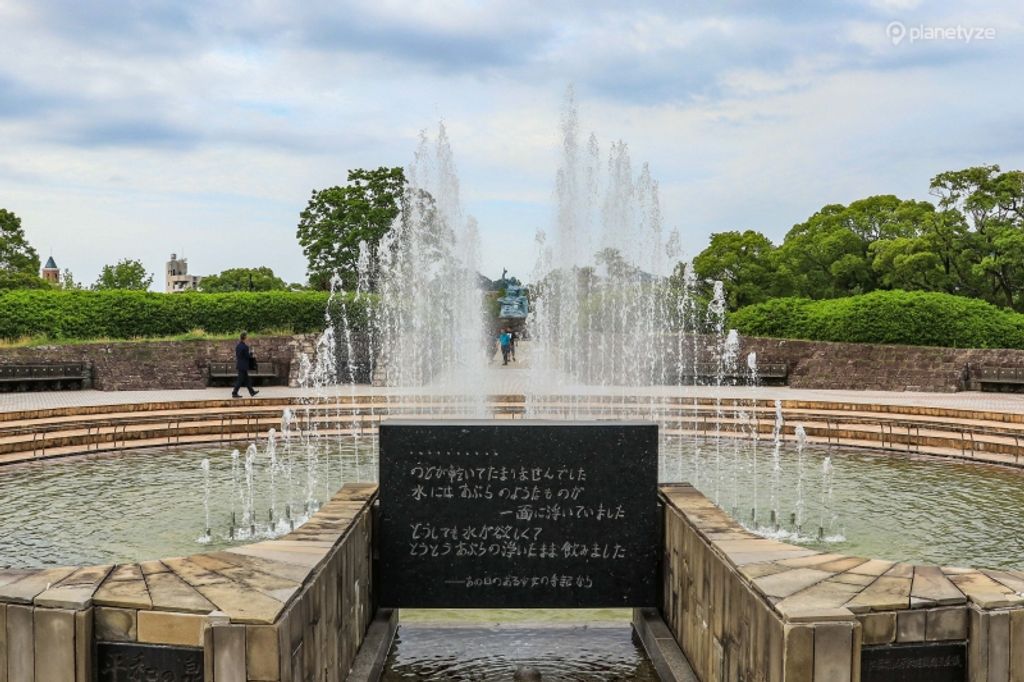 The “Fountain of Peace” at the south end of the park was created as a prayer to the atomic bomb victims who searched vainly for water after being burned in the scorching blast of the bomb. There are other sculptures and monuments praying for peace all over the park, contributed by countries all over the world. You’ll be able to see the many paper cranes hung from the “tower of cranes”. Legend says that folding a thousand cranes will make your wish come true and paper cranes are now a symbol of peace and prayer. This tradition of offering paper cranes to the memories of the people who perished in the atomic bomb started in Hiroshima. It was inspired by the story of a 11 year old girl who survived the atomic bomb when she was 2 years old, but later succumbed to leukemia from the effects of the radiation. This little girl kept folding paper cranes as long as she was able to, believing they would bring about a miraculous recovery. Now thousands of people bring paper cranes to the monuments in Hiroshima and Nagasaki. Why don't you try folding a paper crane for the memorial and say a prayer for peace?

If you’re also interested in seeing Hiroshima too, the following is how you get from Nagasaki to Hiroshima. You can get there by using the Shinkansen in about 4 hours. From Nagasaki Station get on the express train bound for Hakata Station and get off at Shin-Tosu Station. From Shin-Tosu Station, you can get on the Kyushu Shinkansen bound for Shin-Osaka and get off at Hiroshima Station. It may sound a bit complicated but it’s much easier and less time consuming than getting on a plane. Hiroshima has lots to offer including the two World Heritage Sites, the Atomic Bomb Dome and Itsukushima Shrine. So a visit to this other historic city that was rebuilt from the ground up after the war is a great way to see and understand Japan. 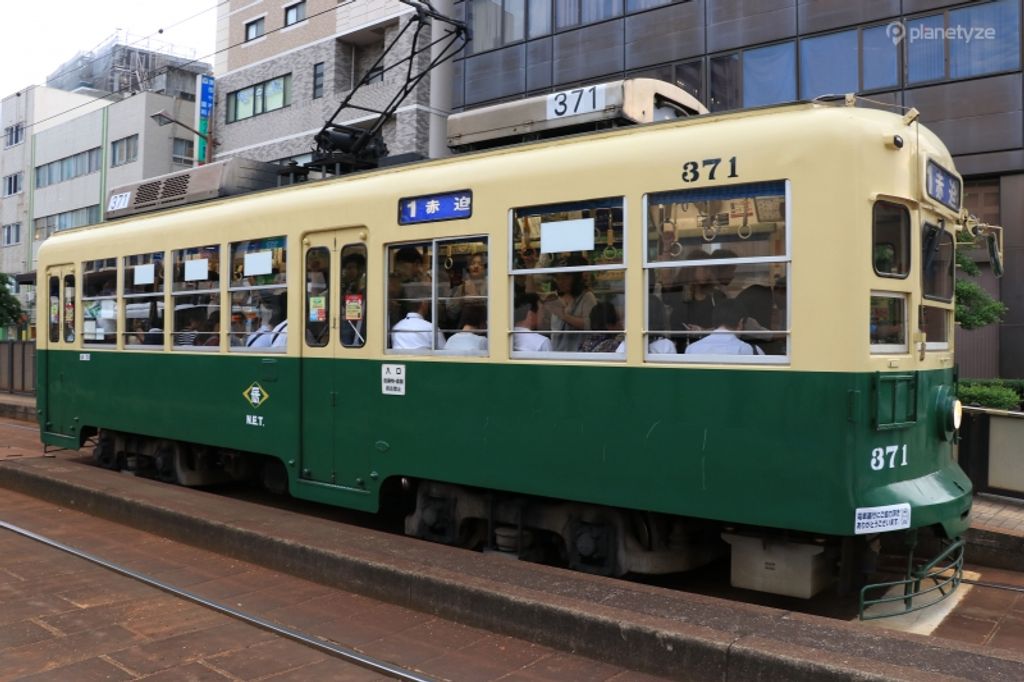 The best way to get around Nagasaki is to utilize the tram or streetcar. It will take you within walking distance to almost all of the main sightseeing spots in the city including the Atomic Bomb Museum and Peace Park. Utilizing the local bus routes is also a good transportation option.

There are lots of other things to do in Nagasaki other than seeing the sobering historic spots related to the atomic bomb. You can go see Chinatown, where they hold a fantastic festival for Chinese New Year or the many churches that dot the area. “Dejima”, the man-made island created as the Portuguese residents’ district during the era of the seclusion of Japan, is also one of the popular sightseeing spots that symbolize Nagasaki .

Or another famous sightseeing spot is the Inasayama observatory atop Mount Inasa. The view from the 360 degree observatory is incredible during the daytime, but much more so at night. The twinkling lights of the port city make up the sight famed as the “10 million dollar view”.  If you are visiting Nagasaki, this is something you cannot miss. You can get there using the Nagasaki Ropeway from Fuchi Shrine Station at the foot of Mount Inasa. And in order to get to Fuchi Station, get on the Nagasaki Bus Route 3 or 4 and get off at Ropeway-Mae bus stop. It’s about a 7 minute ride and a 2 minute walk from the bus stop. 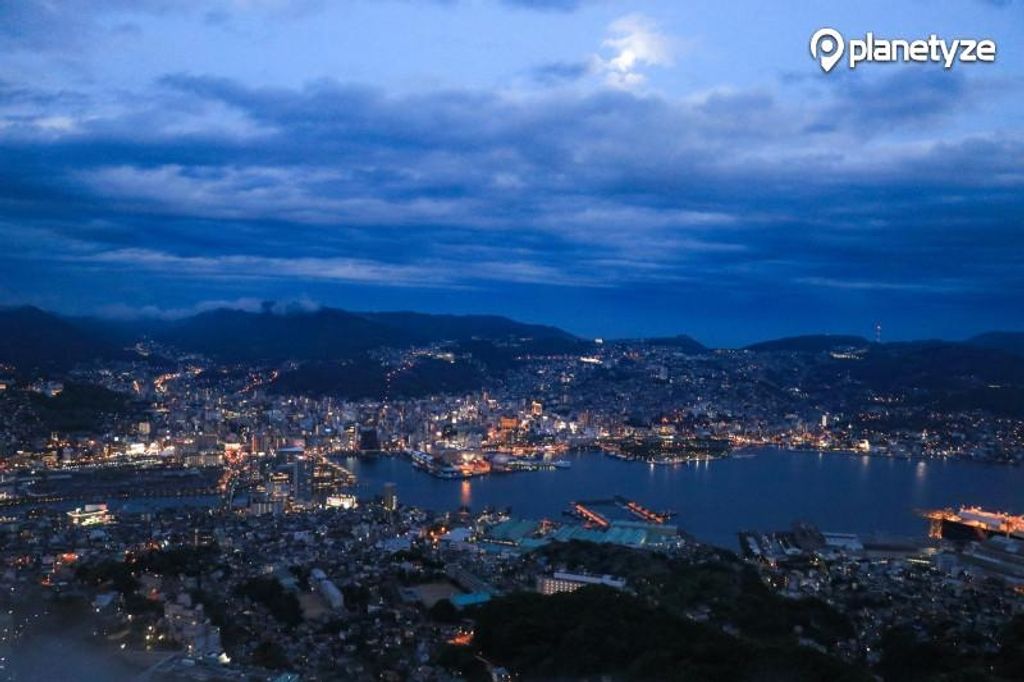 If you’d like to get to know the city of Nagasaki more intimately, I suggest taking a tour with an English speaking guide. TripleLights will provide the tour and guide that best matches your needs. It’s like a marketplace of guides from which you can choose.

All of the guides create their own tours so all of the tours are unique even though they’re about the same city. You can also communicate directly with the guide to ask questions or convey requests like where you want to go for lunch, before actually booking a tour.

And if you don’t find the perfect tour on the list of tours, you can request a tour by listing what you’d like to see or eat, etc. The guides available in Nagasaki will be able to see requests like this and the ones that are available during your requested dates will recommend a tour itinerary just for you. Then you can decide to see what your best option would be.

Remember to take a look at the guides’ profile videos too to see what kind of person they are. You can also see the reviews they got from other customers. I think the opinions of other customers will give you some perspective in choosing a tour. At most places, you aren’t able to choose your guide nor see what they look or sound like before the day of the tour, so this is a great benefit. Enjoy the process of choosing the perfect guide for yourself and have an amazing and educational trip in Nagasaki.

Plan your trip to Osaka with Akane N.