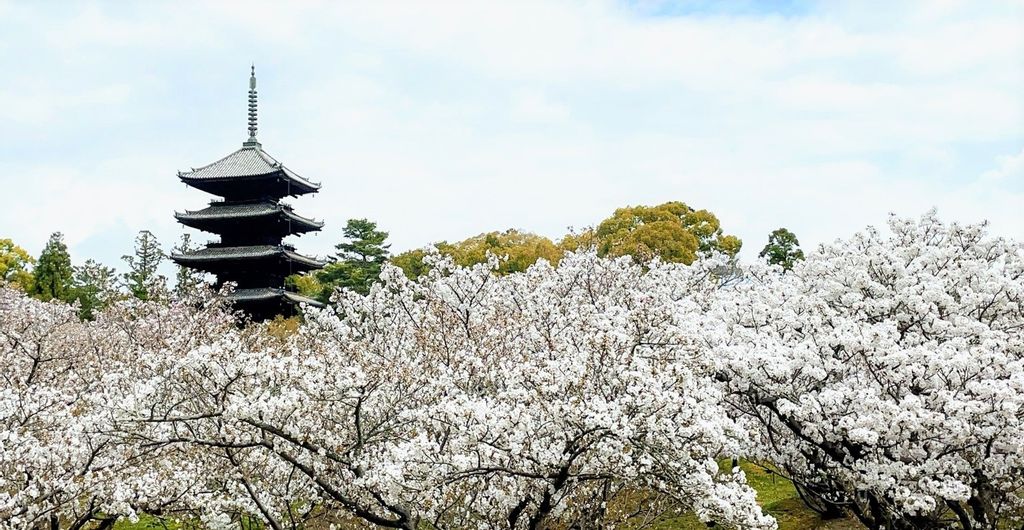 Ninnaji Temple, which is registered as World Cultural Heritage site, located in the northwest part of Kyoto City was the first Monzeki Jiin Temple ('Monzeki Jiin' is the temple where the emperor or his descendants such as imperial princesses served) which was founded in the 9th century.  People called this temple 'Omuro Gosho' because the Emperor Uda gave up his throne to his clown prince and stayed at this temple as a head monk. ('Gosho' means 'Imperial Palace' in Japanese.) Since then, this temple has been called 'Omuro Ninnaji'. 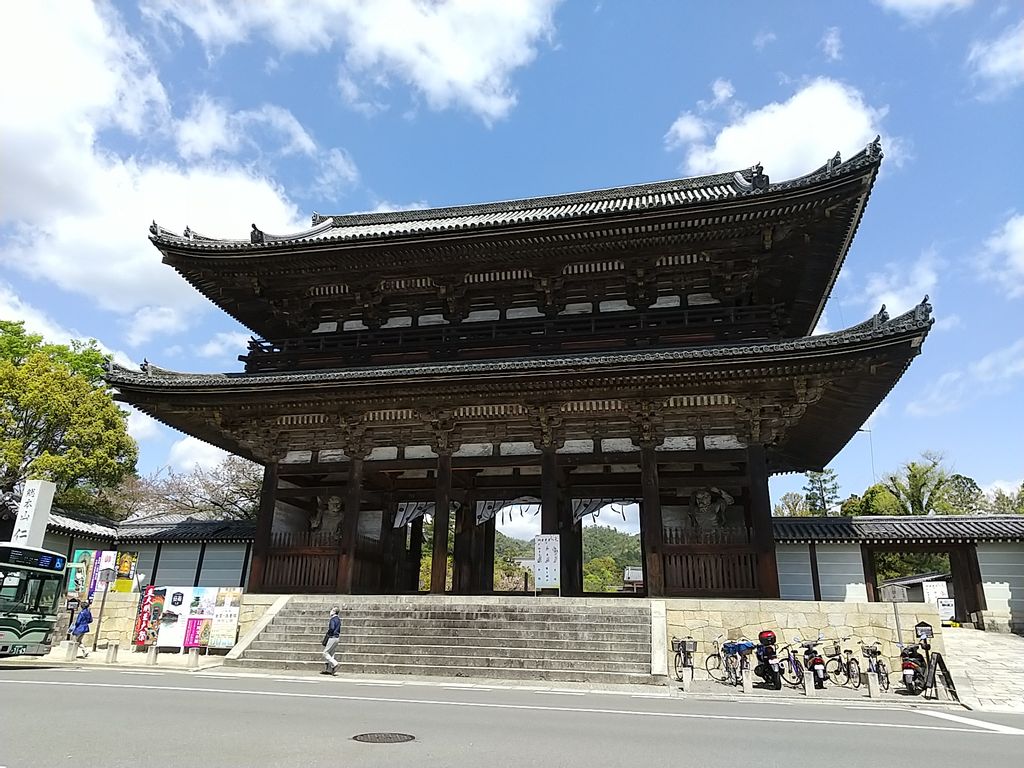 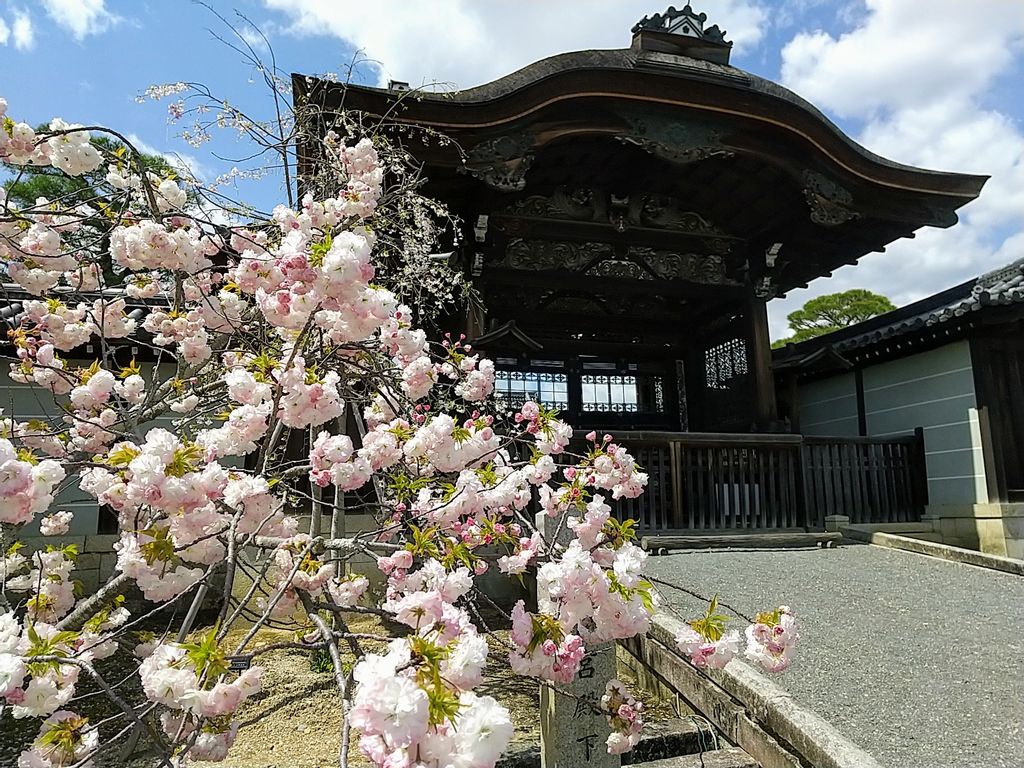 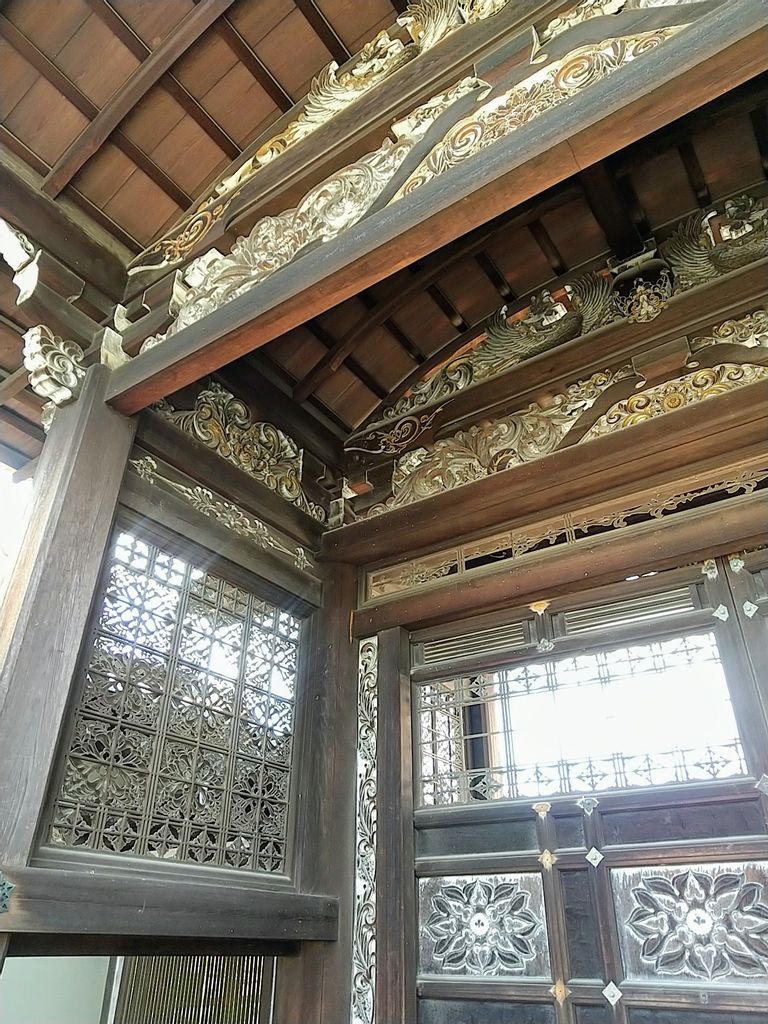 Chokushimon Gate has been used only when the imperial envoys visited this temple. We can see the gorgeous elaborate carvings on its doors and in the transom. 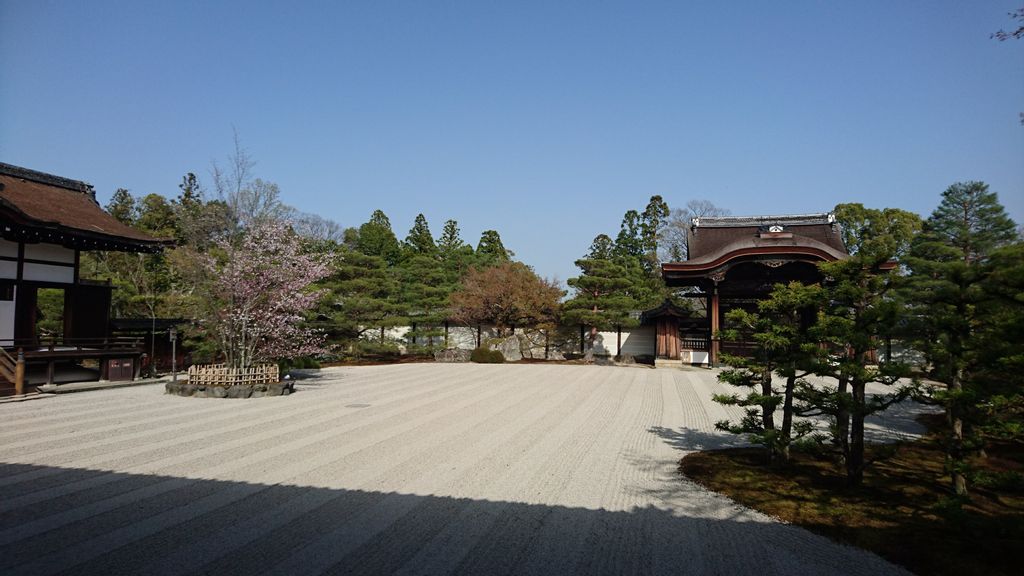 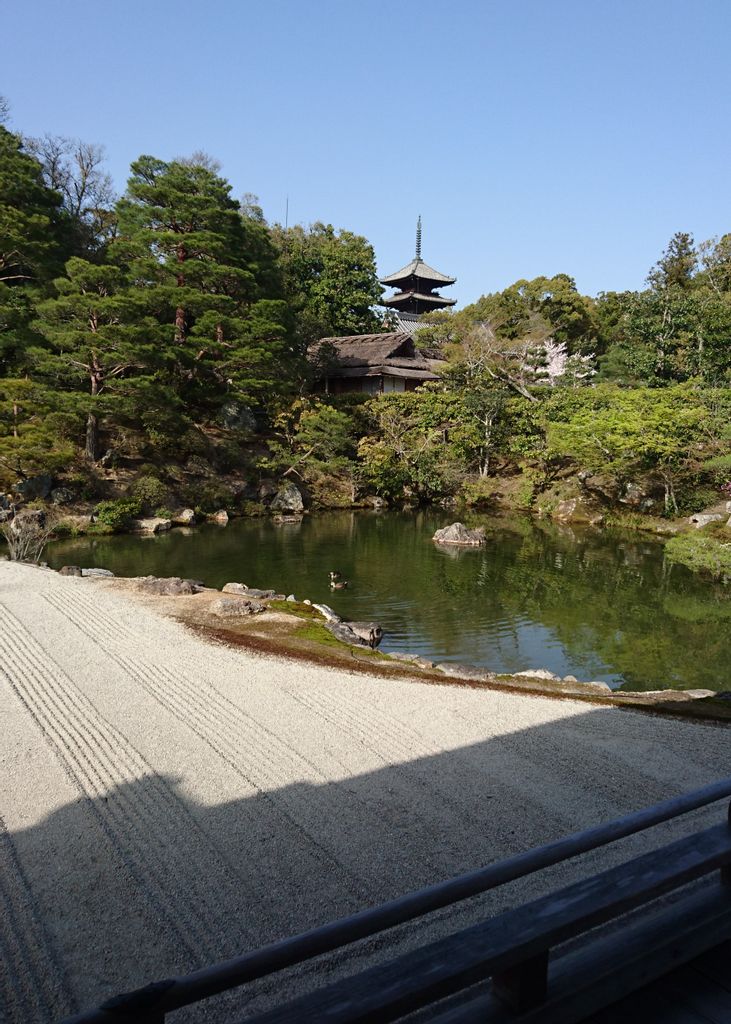 You can enjoy large gardens of two different styles in its precinct. South Garden is the dry landscape garden covered with white sand. You can see two trees: A tachibana (mandarin orange) tree at the right side and a cherry blossom tree at the left side, like the ones that were in the main palace of the Imerial Court of Heian era (more than 1200 years ago).

North Garden is a strolling type garden which has many trees and pond. Five storied pagoda can be seen far in the distance. 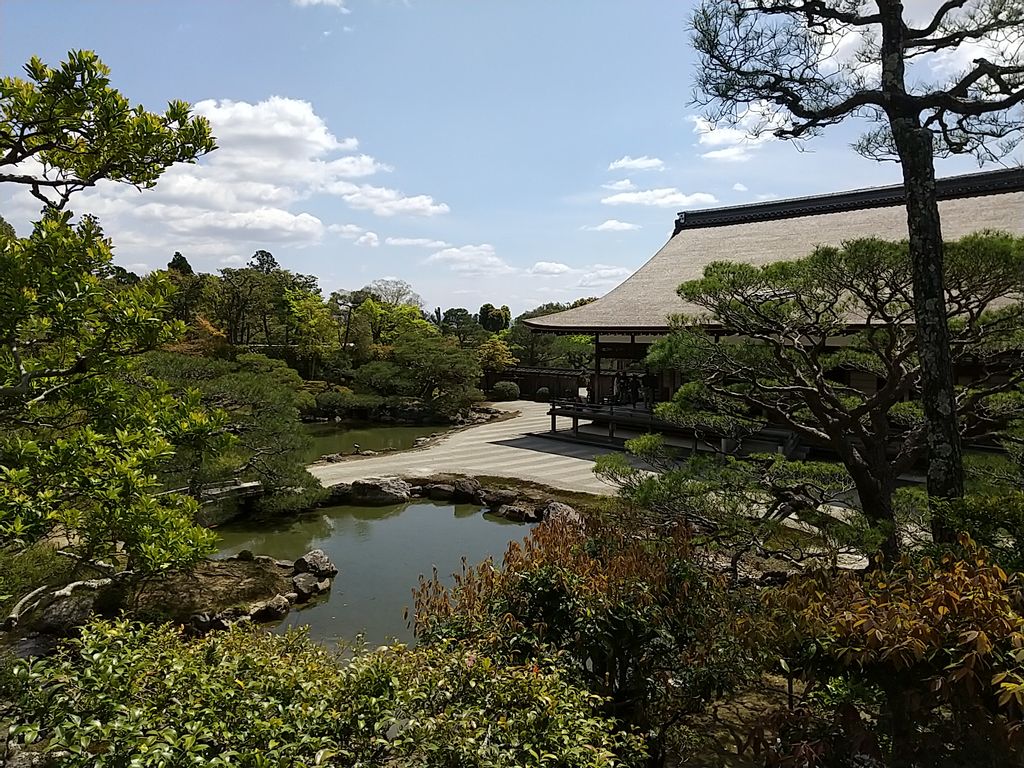 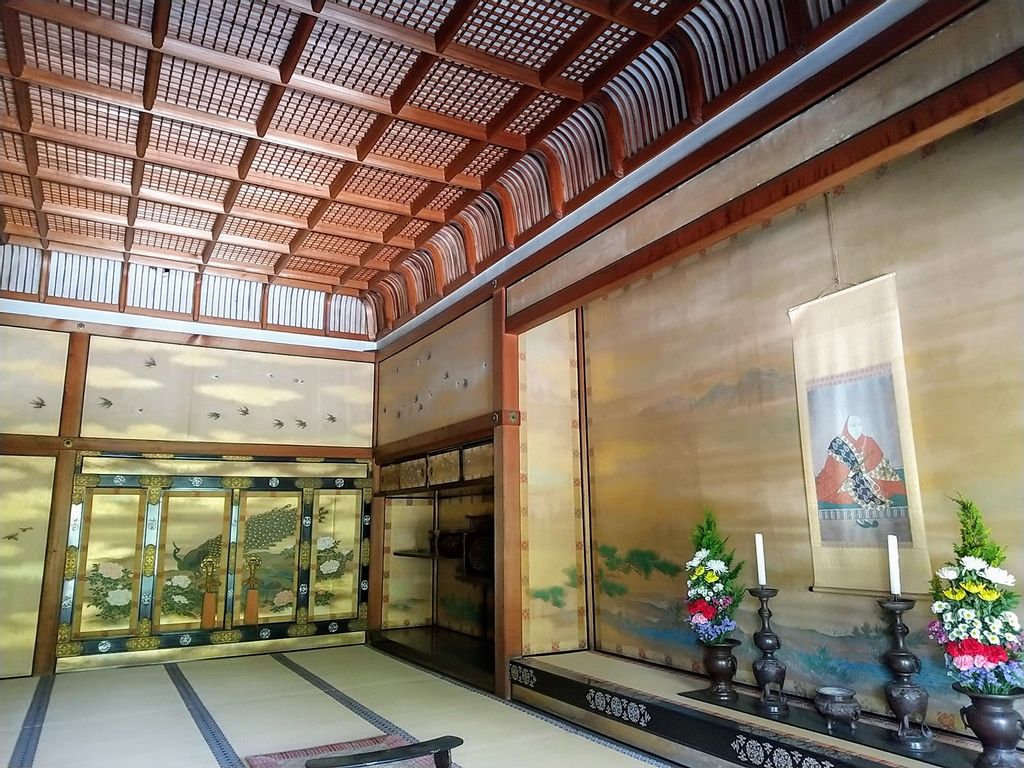 This room which has coffered ceiling had been the prestigious room in Ninnaji. You can see the gorgeous pictures on the walls and sliding doors, and a picture of Emperor Uda. 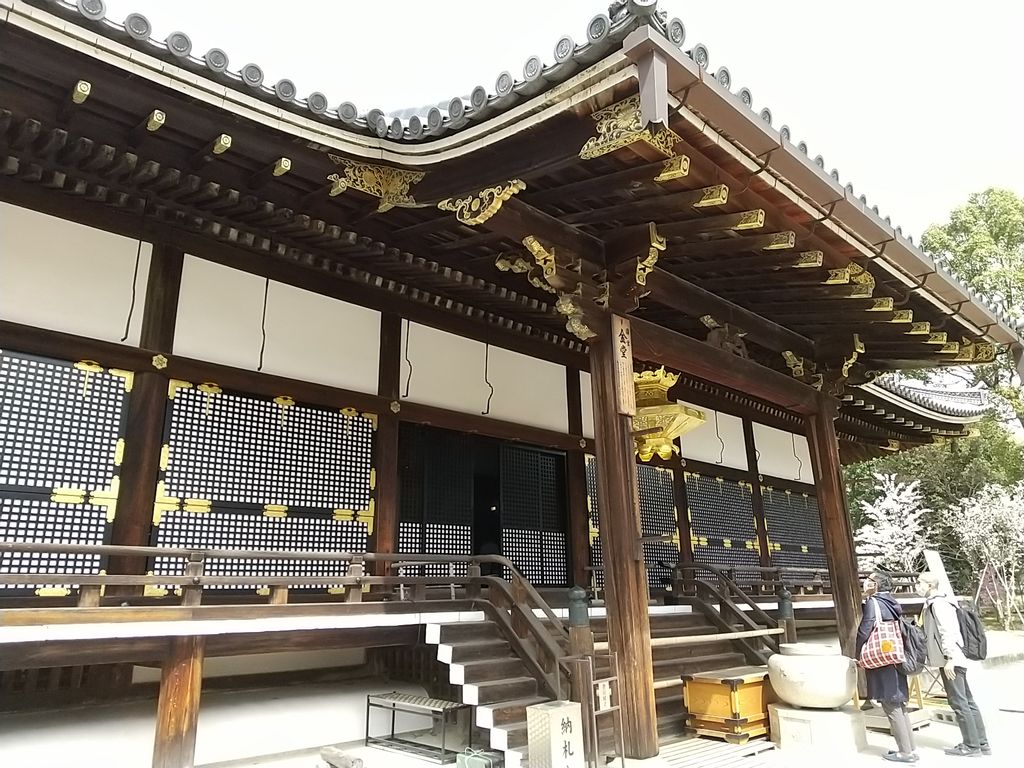 Kondo, the main hall of this temple, is a National Treasure because it was transferred from the Imperial Palace. It used to have been 'Shishinden' where important rituals were held and the oldest 'Shishinden' existing in Japan. The present building was reconstructed at the very place where the original building was constructed. (Many buildings of many temples in Kyoto were burned down in the fire during wars.)

Inside of Kondo, there are statues of Amida Nyorai Sanzon. (Some people say it strange that Amida Nyorai Sanzon which are the symbols of Jyodo Sect or Jyodo-shinsyu Sect are seated here, at Ninnaji Temple which belongs to the different sect, Shingon Sect.) We can go into Kondo during the limited period in spring and autumn when it's opened to public. (Taking pictures inside of Kondo is not allowed, so please refer to the website to see the pictures.) 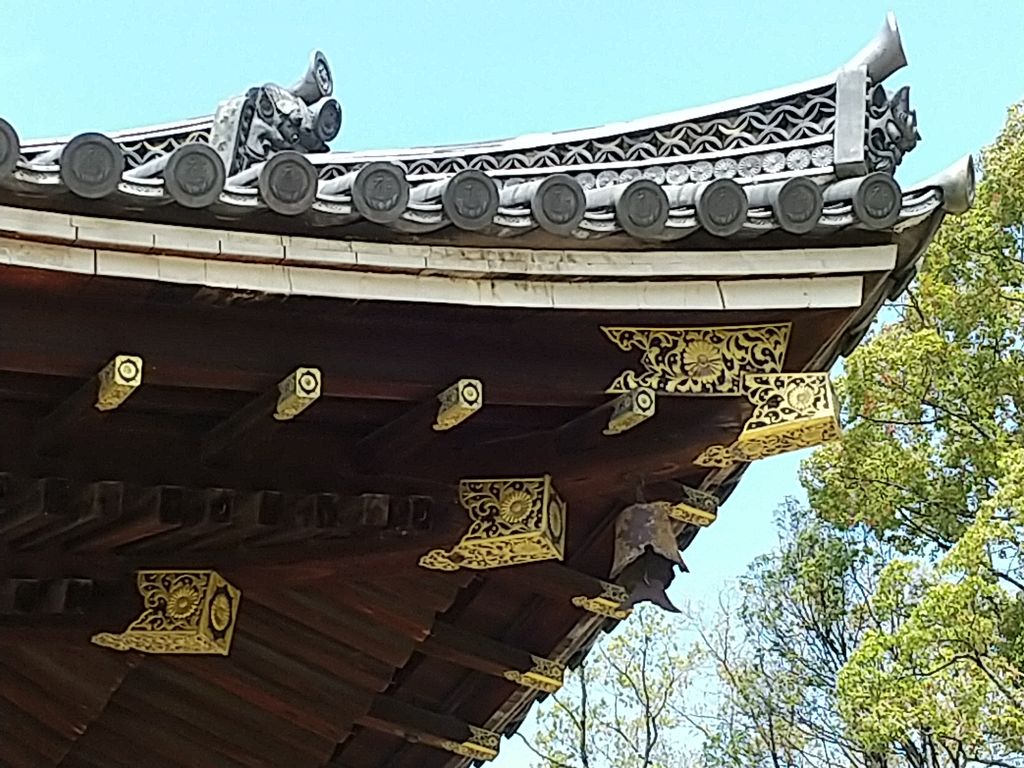 Do you see the family crests of the Imperial family under the eaves of the roof? 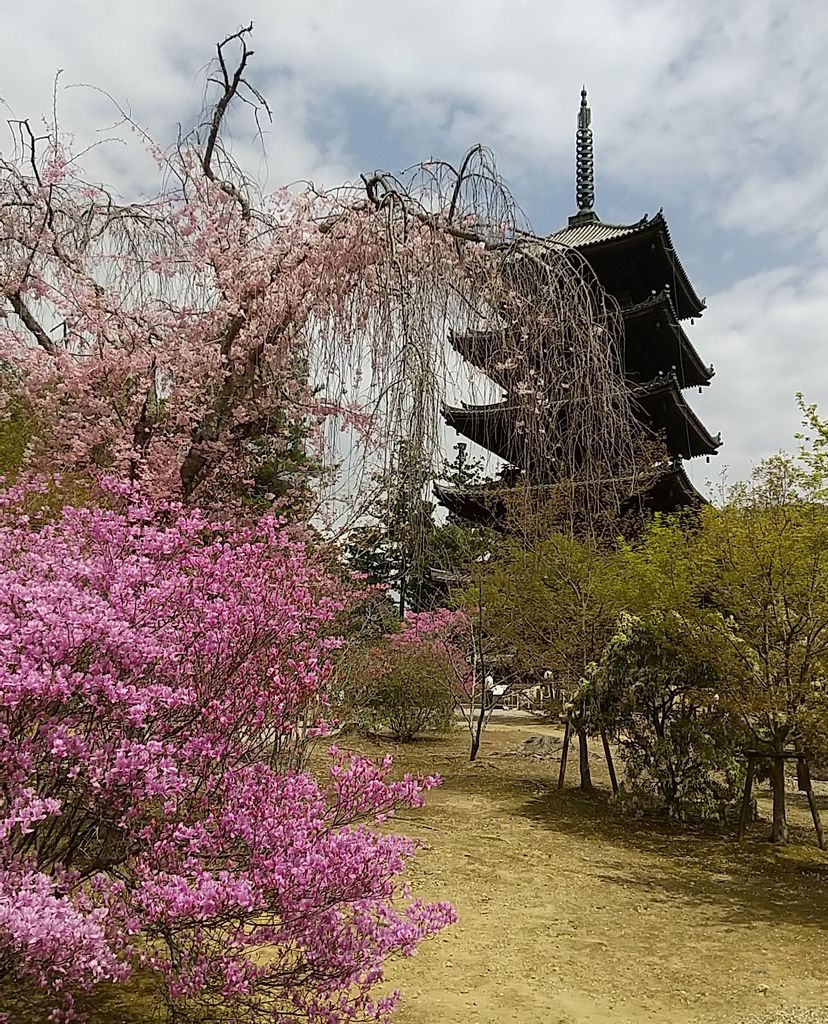 Five Storied Pagoda, which is 36 meters high, was constructed in the 17th century, and now, is the symbol of Ninnaji Temple. It's opened to public only during the limited period. (The time is not fixed.) Buddhist statues such as Dainichi Nyorai are seated in each direction of east, west, south and north in the pagoda. Also, taking pictures of inside of the pagoda is not allowed, so please refer to the website to see the pictures and check the time when it's opened to public. 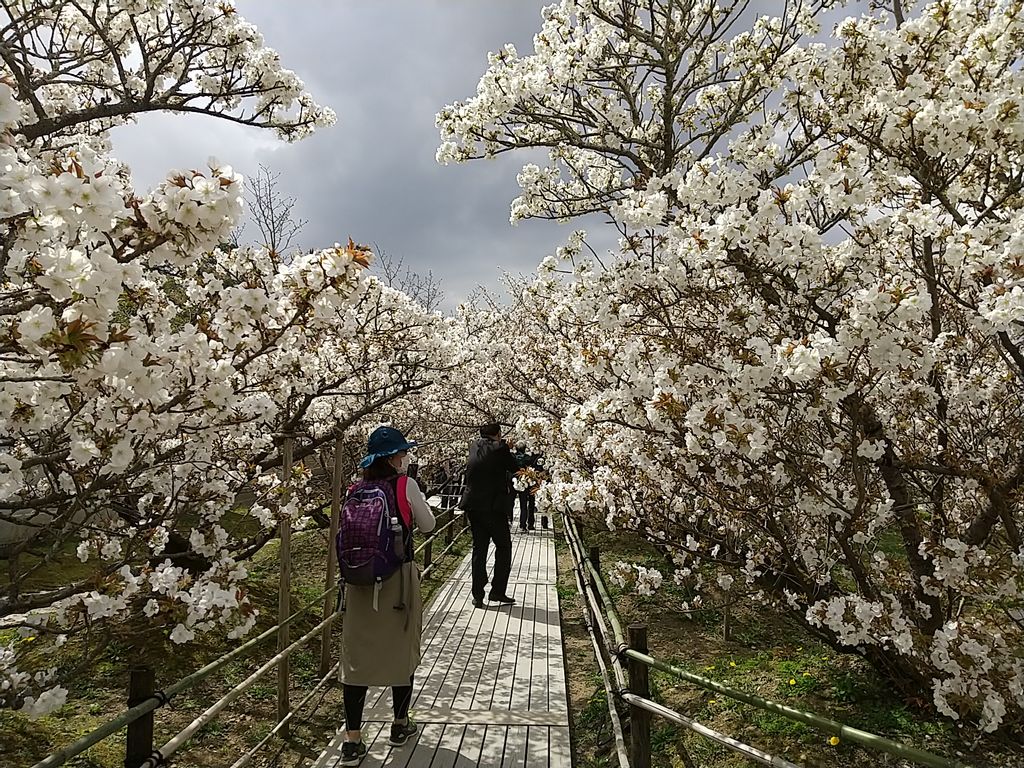 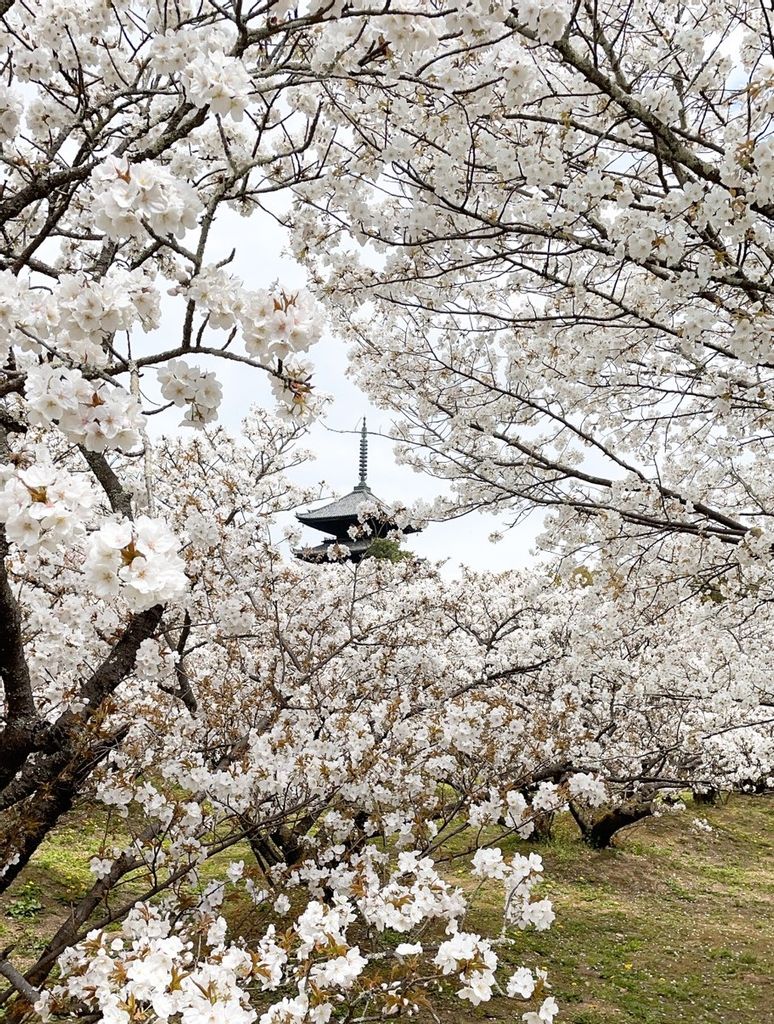 Ninnaji Temple is especially famous for its 'Omurozakura' which gets in bloom late compared to other cherry blossoms. You will be surrounded by as many as 200 cherry blossom trees in its garden.