Super welcome to "Temple or Shrine."

"Dad, is this a temple or shrine?"

"It must be a temple. Coz there's a pagoda behind the temple.

"Yeah, but it also looks like a shrine, honey. See. There's a shrine gate."

"Right. What the heck happened?"

Temple or Shrine? It can be a little confusing seeing some differences between temples and shrines, like the above imaginary dialogue of a young family strolling the streets of Osaka, Japan.

So. Here's a photo of a place which the above-mentioned-family happenly passed by.  Again a small quiz. Is it a temple or shrine?:) 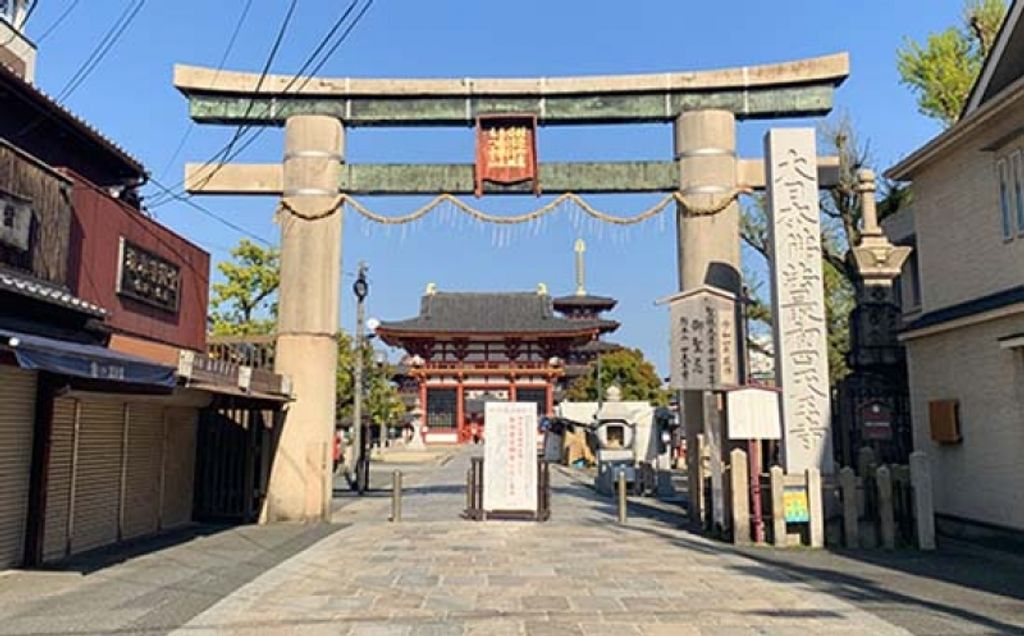 The answer is TEMPLE. No problem at all if you answered it wrong. This is Osaka's Shitennoji Temple, which is regarded as the oldest temple in Japan. Though rebuilt with concrete. As you see the huge shrine-gate in the foreground and the five-story pagoda in the distance, people might well get a bit stuck.

In fact, it's literally a long story. So let me tell you about it some day on our tour.:) With this as the introduction, let's move on to the main subject. Actually there is a big difference between the temple and the shrine. Here're two shots with a touch of information each to make up for the weird quiz above.:) 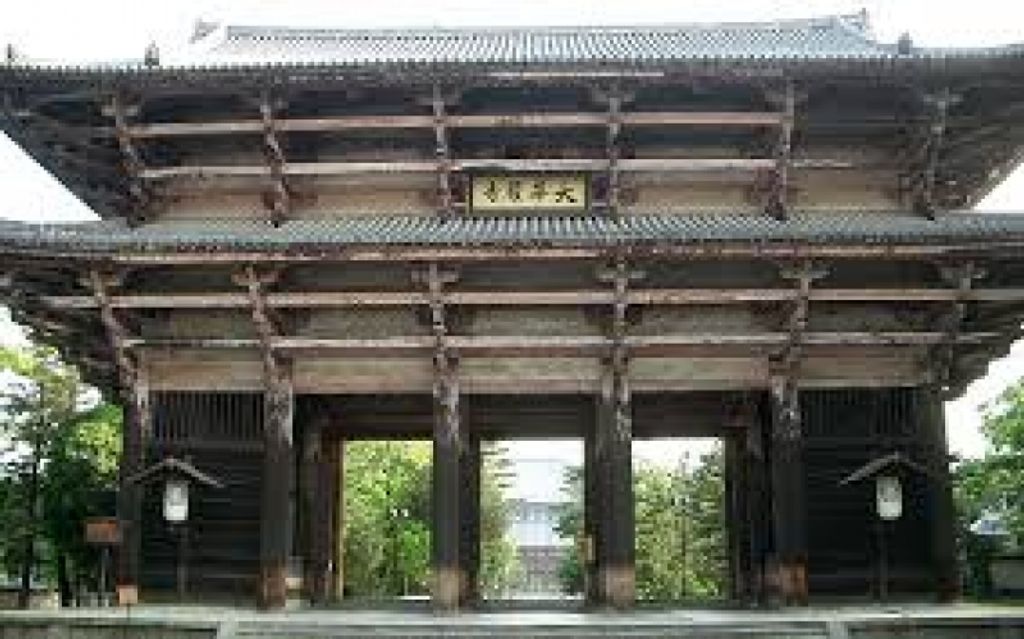 So let's take a look at what the temple is like.

When you visit a temple, first you'll probably see its temple gate(s) which often houses a pair of guardians on both sides of the gate. Then you'll see its main building which houses Buddha, the Goddess of Mercy, and/or the immovable Wisdom King, and the like.

Sometimes you also find a three or five-story-pagoda somewhere in the precincts, depending on its arrangement of the buildings. (So. Dad was right in saying that it's a picture of a temple.)

Japan's temple is related to Buddhism which was introduced in 538 from India via Korea/China. There are as many as thirteen sects and 77,000 temples across the country. Buddhism is for both this world and the next world, so people visit temples for various reasons, like to attain spiritual enlightenment, good health, easy birth, etc. They also visit and pray for religious service for their ancestors and the peaceful life in the next world.

2 Main shrine gate of Fushimi Inari SHRINE in Kyoto (Enshrined is the god of harvest.) 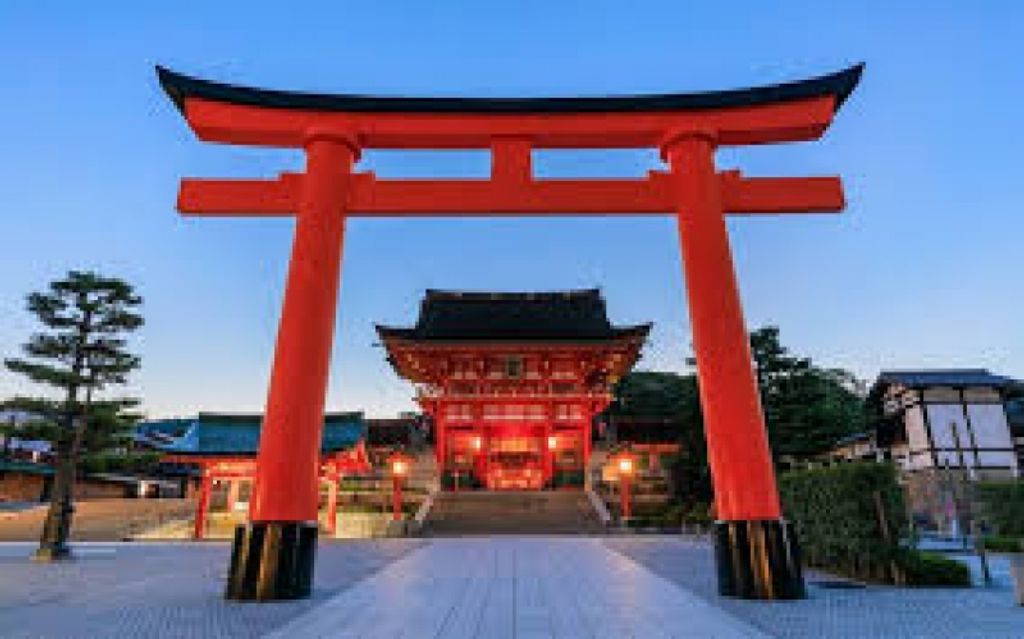 When you visit a shrine, first you'll see its vermilion shrine gate believed to be effective for exorcism, to keep away evil spirits. Then you'll see its main building which houses no statues, because the god/goddess can exist anywhere in and around the precints like a mountain, huge tree, rock, etc. You also find such a pair of guardians like dogs, lions, and foxes at least in front if its main building in the precincts.

The shrine is linked to nature worship, shintoism, which has neither founders nor scriptures. What is enshrined is a mythical character, emperor, Shogunate, general of samurai, or the god of harvest, etc. There are as many as 80,000 shrines nationwide. Shinto is mainly for this world, so people pay a visit for success in life, good business, good health, easy birth, and the like.

Now let me introduce ABC News Australia's clear-cut explanation on shintoism with four definitions, under the title of "What the pocket monsters of Pokémon can teach us about Japan's Shinto faith." (Sep. 7, 2020)  (quote)

Here's a little more information about Japan's indigenous nature worship. In the northern part of Japan like Akita Prefecture, people called matagi believe in mountain gods/godesses, and mostly live in groups of around 10 to 40 matagi in a back country. They have been living by hunting bears, dear and any of that. They also go fishing chars living in clear streams, and gathering edible wild plants.

Matagi value game or nature's blessings as gifts from the mountain god/goddess. So after shooting bears dead, for example, they hold a ritual to send the bear's soul, thanking the mountain gods/goddesses for a good hunting. They make literally the best use of mountains and nature's blessings. It is said that matagi has over a thousand years of history. Very interestingly this summer, 2020, Hiroshima's 26yo man who longs for the matagi life reportedly turned matagi.

So please notice that praying for a happy marriage at a shrine does NOT always WORK, no matter how many times you do. It sometimes  works, and sometimes won't. So let me cross my fingers. The fact is that a few years later it literally WORKED! Yeah!!  The bottom line is "To be or not to be; that is the question!"

Thank you very very much for visiting "Temple or Shrine."  I wish you all the best.:)

You'll Never Say, "What a Shock!" "Washoku" Is the Very Soul of "Omotenashi" Japan!

Hello. Huge welcome to Wa-shoku! And I'm sorry for my trivial pun in the title. Hopefuly I'm not a "pun man?" First of all, a touch of information ab...

OIDE-YASU (warm welcome in the Kyoto dialect) to Kyoto's Maiko. First of all, you may wonder what Kyoto's Maiko is all about, like  "Are they so-call...

Huge thanks for visiting sakura Japan. Ever since the Heian period (794 - 1185) "hana" (referring to flower) has long been about sakura (cherry bloss...

Ready to Enjoy "Sake" for Sake of Your Fantastic Memories?

Warm welcome to Sake. Super Happy News!! Junmai Ginjo Fukuju made by a sake brewery in Kobe, one of the best sake capitals, was served at a banquet a...

This is a one-day tour of Kyoto. Kyoto is an ancient capital for over 1,000 years. You will visit Kinkakuji Temple, Arashiyama Bamboo Forest, Kiyomizudera Temple, and Fushimi Inari Shrine. All of these places are World Heritage Sites. You will also walk about at Gion area in central Kyoto, where, by chance, you will see a beautiful Maiko/Geiko.

We'll visit three places, rich in Japan's history and culture. Firstly, Himeji Castle designated as Japan's first World Heritage Site in 1993, and ranked 7th as a place to visit in 2019 by NY Times. And Kokoen Japanese Style Garden nearby. Finally, Shoshazan Engyoji Temple, ranked 20th by TripAdviser in 2019 as Japan's representative spiritual heartland. Himeji is one hour away by the Shinkansen from Kyoto.

In this tour we will visit must-see places in Nara and Osaka. Nara was an ancient capital of Japan in the 8th century. We'll visit Todaiji Temple, housing the gigantic Great Statue of Buddha, and Kasuga Grand Shrine. Let's go to a nearby nice sake brewery, if you love sake. Osaka Castle was built in the 16th century. Let's go up to the top of the castle tower. You will feel as if you were a shogun. We also visit bustling Dotombori Downtown Osaka.

This one-day private tour includes must-see tourist spots in Osaka. We will visit Osaka Castle, Kuromon Market plus Dotombori both at downtown Osaka, and Umeda Sky Building. In this tour we will see the present and past of Osaka and its energetic people.

This is a full day private tour of eastern Kyoto. We will visit must-see places in eastern Kyoto with over 1,200 years of history, such as Ninenzaka & Sannenzaka alleys, Kiyomizudera Temple, Sanjusangendo Temple, Fushimi Inari Shrine, Fushimi sake brewery, and Gion area.

Plan your trip to Osaka with Shogo K.