So many people visit Nara, the oldest capital of Japan and they enjoy visiting Nara Park where they can see many wild deer and Todaiji Temple to see the 15 meters' Great Statue of Buddha. 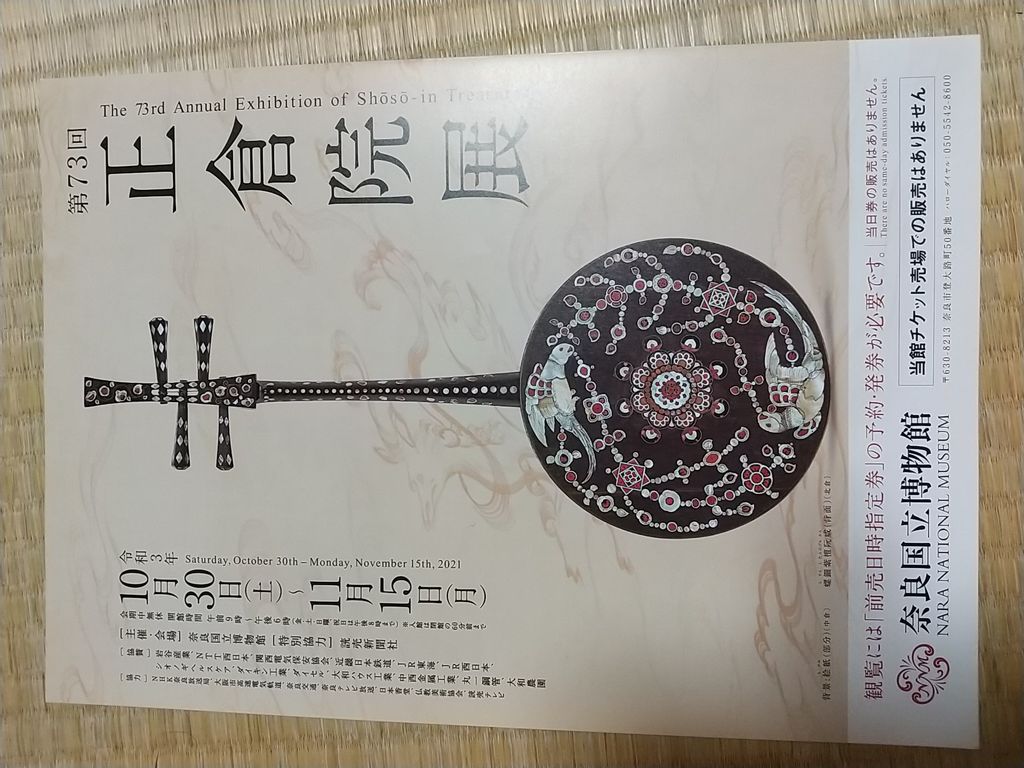 In the precinct of Todaiji Temple, there is a storehouse called 'Shoso-in'. It is originated from the 8th century when the Empress Komyo (wife of Emperor Shomu who founded Todaiji Temple) dedicated the relics beloved by her husband to Todaiji Temple.  As many as 9000 dedicated treasures are mostly said to have been made in Japan in those days, however, some of them were imported from Asian countries such as China, Korea, and as well as Persia in Central Asia via the 'Silk Road'.  Among them, they say a board game, sugoroku with which Emperor Shomu may have played has been kept... 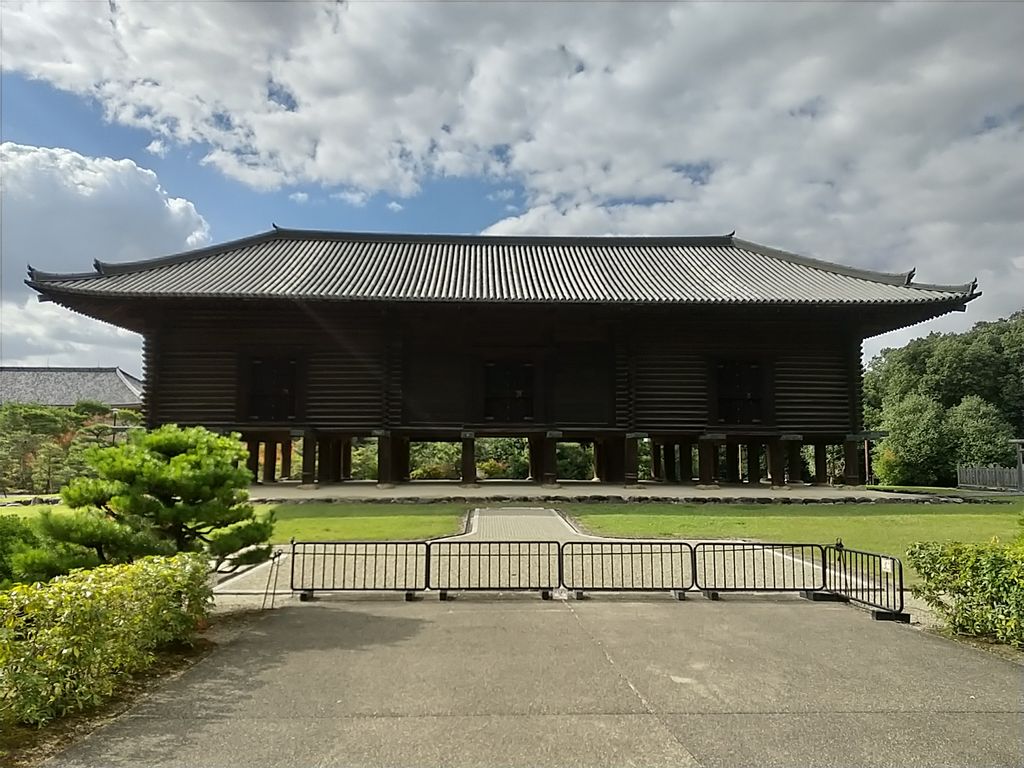 To keep those treasures safe, Shoso-in has a unique way of building called 'Azekura-zukuri'.  And also, those treasures are not opened to public. They have a special exhibition, 'Exhibition of Shoso-in Treasures' once in a year only about for two weeks in autumn.

Shoso-in is managed by Imperial Household Agency and they open the door of the storehouse, take some of them out for the exhibition in turns. It is a good chance for the treasures to expose to the new air! The air is taken into the building. 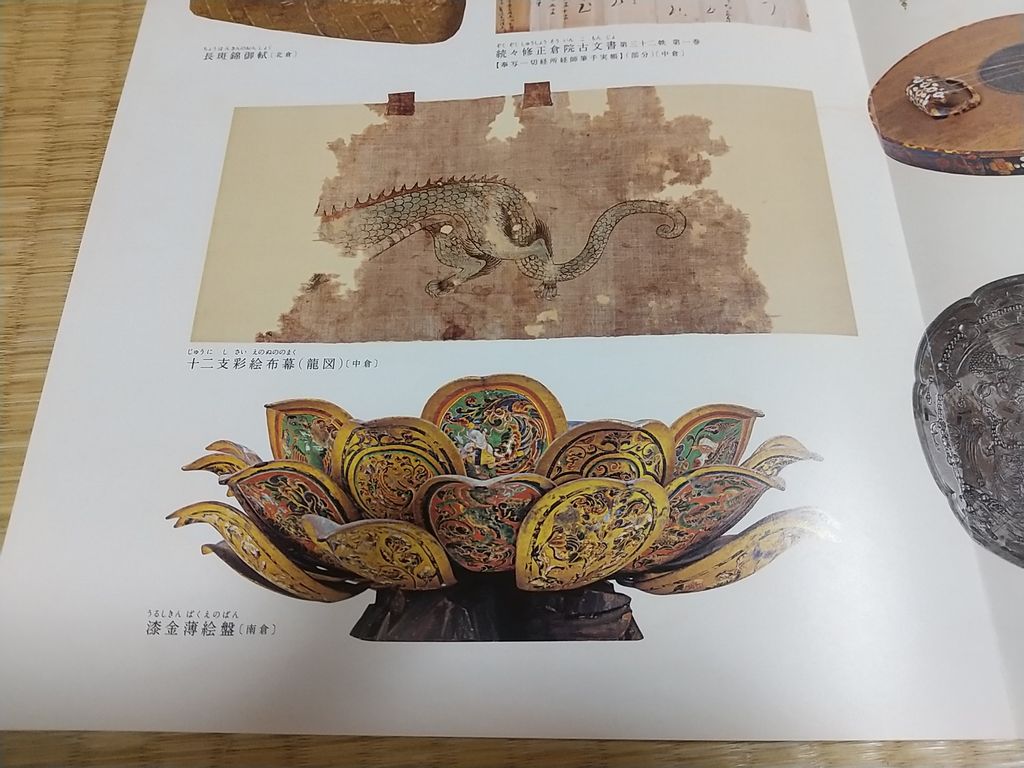 (This picture is taken from the brochure) 'Urushi-kinpaku-e-no-ban' which is in the shape of a lotus flower and is Japanese lacquer gold leaf is put on, is said to have been used as the incense burner stand in front of the Buddhist statue more than 1200 years ago! 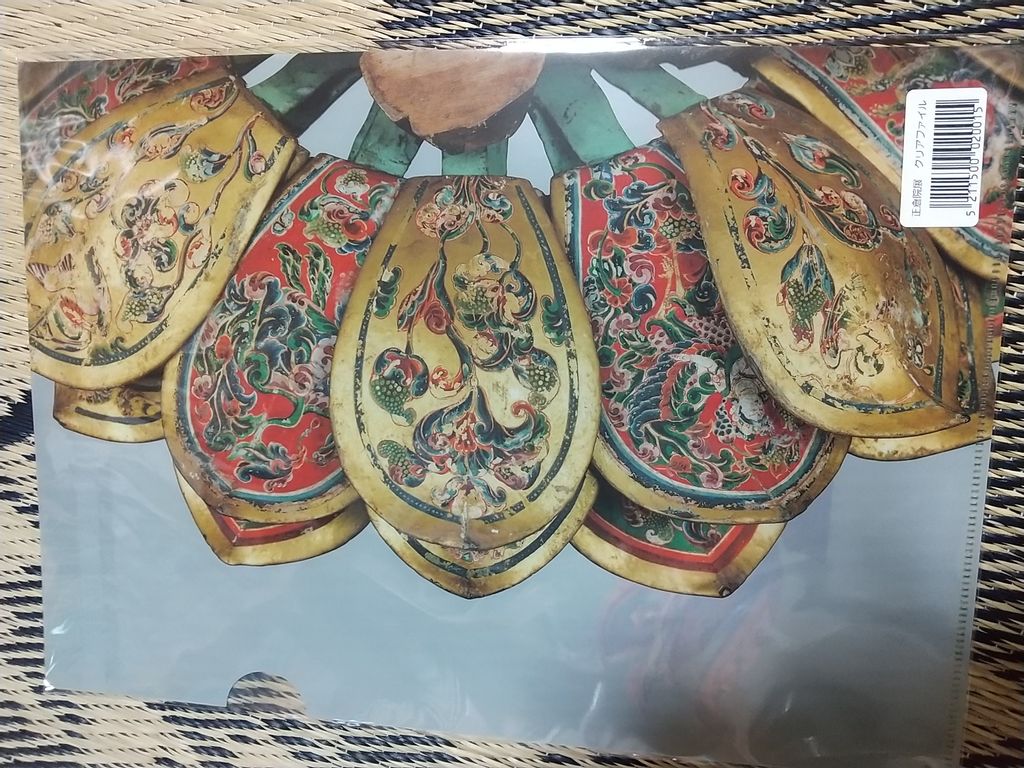 (borrowed from the document folder which I bought at the museum)

One of the two highlights of this exhibition, maybe, 'Raden shitan no Genkan' (Genkan lute of shitan with mother-of-pearl inlay) is a musical instrument which has four strings loved by Emperor Shomu. It is said to have been made in Tang Dynasty in the 8th century.

We can see the fine work made from raden (mother of pearl) and hawksbill turtle on its backside. Can you find two parakeets? 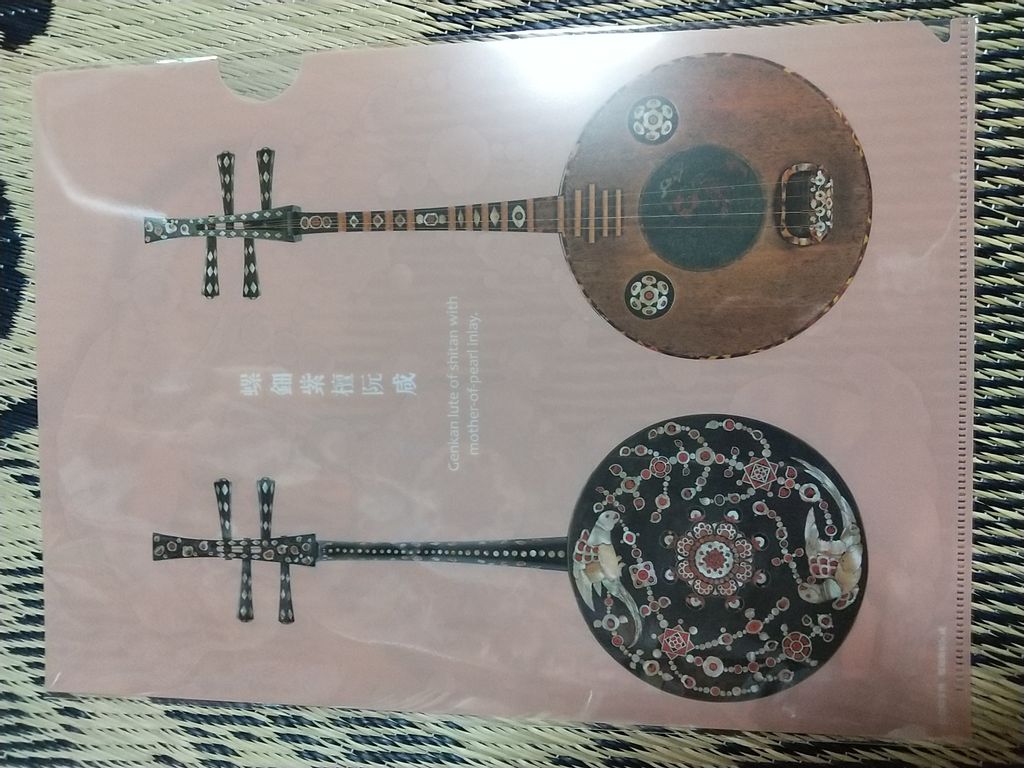 (borrowed from the ducument folder which I bought at the museum)

A cup made by glass and the costume of singing and dancing band which were used for the opening ceremony of the Great Statue of Buddha in the 8th century are exhibited for the first time in Nara in 25~28 years. It is the first time for the dyed silk cloth to be exhibited this time. We can also see brush, inkstone, ink, paper and so on of that time.

How amazing it is that a kind of letter (written in kanji) written by Empress Komyo herself called 'Toka rissei' has been kept for more than 1200 years. Her handwriting is solid and we can feel the strength.

We can also see the documents such as the family register of that time. We can see the names of some families, names of each member of the families, and characteristics such as 'with a black mole on her left cheek'. 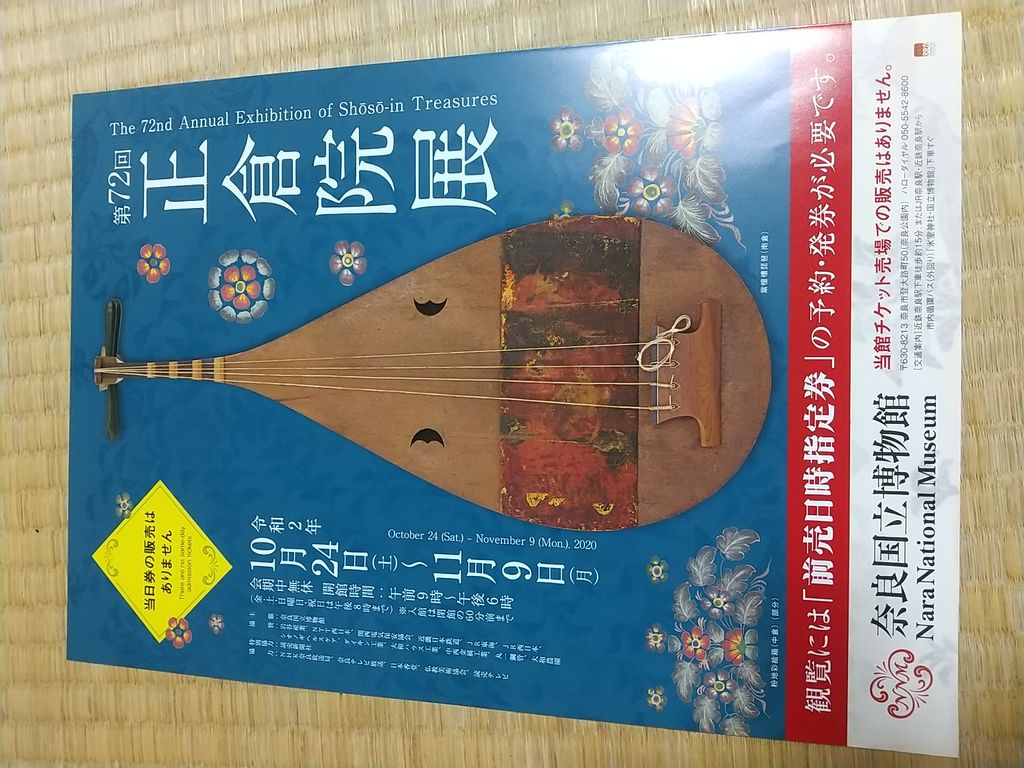 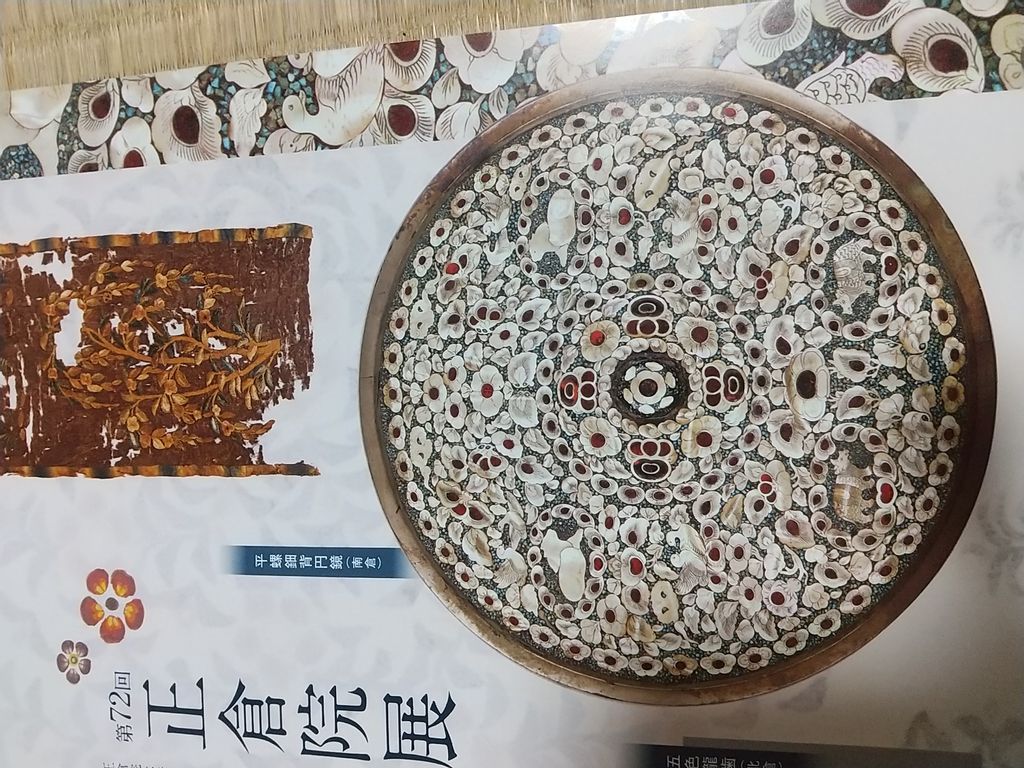 (This is the brochure of 2020.)(This picture is taken from the brochure.) 'Heiradenhai-no-enkyo' is the mirror (backside of the mirror) made of cupronickel has pictures of rhinos and lions. It's the fine work of unique materials such as raden (mother of pearl), amber and hawksbill turtle. It also has fragment of turquoise sprinkled in the gap.

You are required to reserve the ticket in advance to see the exhibition. If you are interested in Japanese (especially old time's) history, and are lucky enough to visit Japan (Nara, Kyoto, or Osaka-it's easy to come to Nara from Kyoto or Osaka) around the end of October to the middle of November, I think you should check the official website of 'Shoso-in' or 'Nara National Museum'. You will be able to have the precious experience!

Plan your trip to Nara with Tomoe S.