Three Temples and Shrines in Osaka

Osaka is a city well known for drinking establishments, shopping districts, and comedy. However, if you feel like taking a break from the crowds, and experiencing a more traditional side of Japan, then why not visit a temple or shrine. We have selected the top three in Osaka, including the oldest temple in Japan: 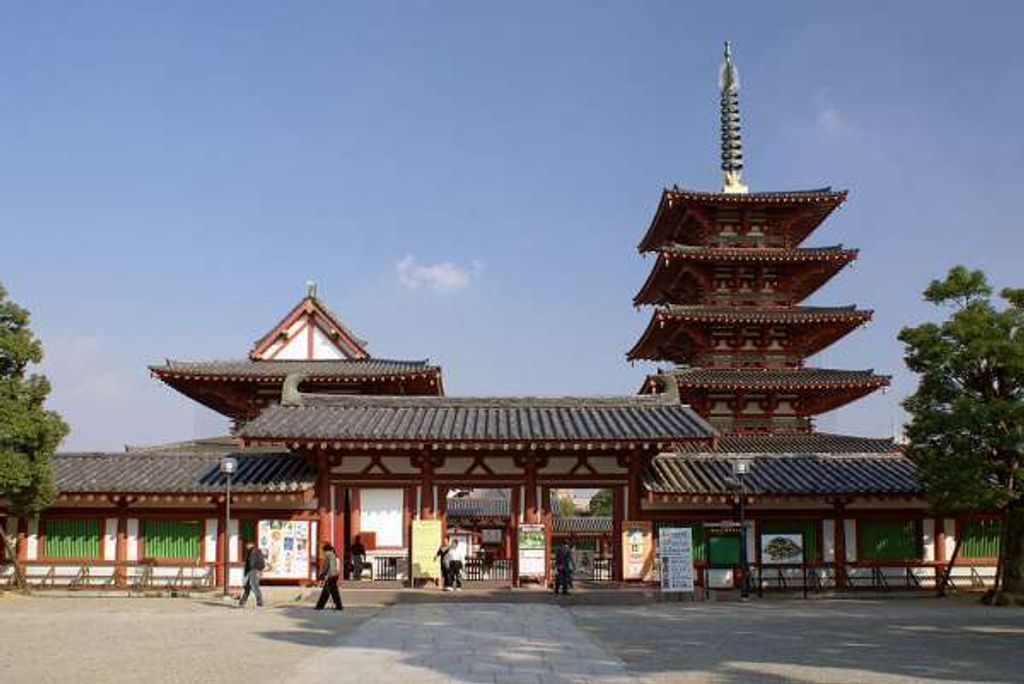 Shitenno-ji is Japan’s oldest temple which was established by Prince Shotoku in his bid to create a new nation centered on the Emperor. It was erected to provide salvation for the world.

This was Japan’s first genuine Buddhist temple, built in 593, by Prince Shotoku to honor four heavenly kings. The central gate, the five-storied pagoda, the Kon-do main hall and the Kodo lecture hall are arranged in a line facing from south to north, all surrounded by a corridor, a precious architectural form seen in China and the Korean peninsula from the 6th to 7th centuries as the prevalent style in Asia brought to these times. As the site to put the fundamental principles of Buddhism into practice, four institutions were established: the Kyoden-in to practice Buddhism, the Seiyaku-in to dispense medicine, the Ryobyo-in to treat the sick, and the Hiden-in to accommodate the elderly and those with no family, facilities that were similar to current social welfare institutions. Many of the buildings within the temple were burned down due to war and other disasters, and the current buildings were rebuilt in 1963. There are many highlights such as the Taishi-den where Prince Shotoku is enshrined, the Gokuraku-jodo-no-niwa Japanese garden, the five-storey pagoda which is open to the public and the Ishii-no-torii stone gate which is an unusual structure for a shrine. Shitenno-ji is within walking distance from Japan’s tallest skyscraper, Abeno Harukas. Being able to view both the ancient construction of the temple together with the modern architecture of Harukas makes it a popular sightseeing spot. 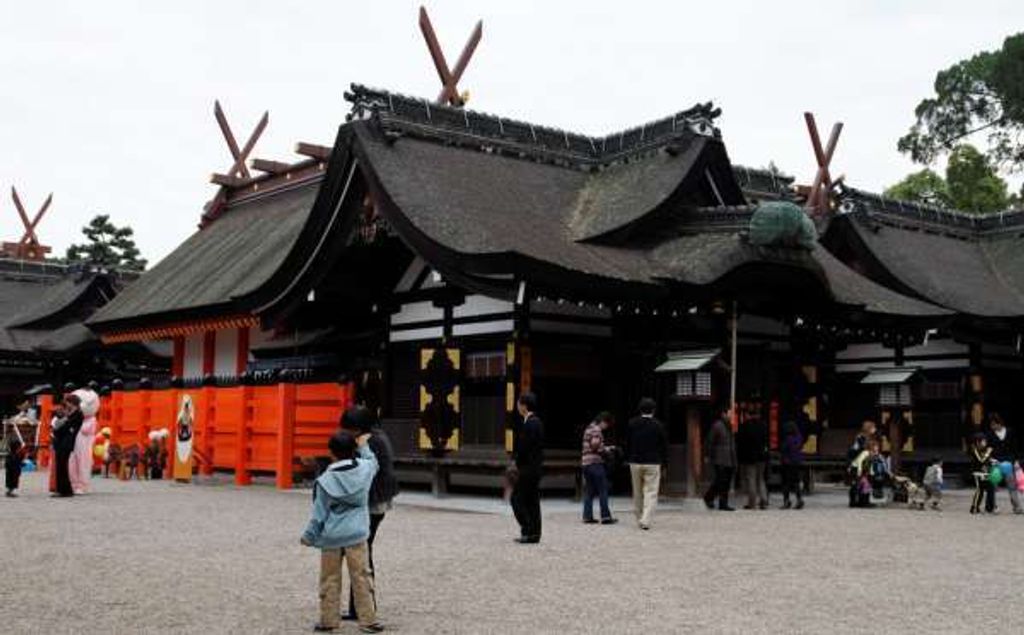 Sumiyoshi-taisha is the main shrine for the nation’s 2300 Sumiyoshi shrines, boasting a history of 1800 years. The honden main hall is separated into four structures with the 1st, 2nd, and 3rd main shrines built in a row, and the 4th built across from the 3rd, a highly unusual configuration. Called the sumiyoshi-zukuri style, the shrine’s buildings have been declared a National Treasure, and the special form is the oldest of its type in the history of shrine architecture. The Kakutorii stone gate has the feature of being a Sumiyoshi Torii with its square pillars. The Taiko-bashi Bridge has a grand arch and its purpose is to cleanse people of their sins before they approach the gods. It is reminiscent of a rainbow as a bridge connecting the lands of Man and Gods. The Important Cultural Property of Ishibutai (stone stage) is one of the three great stages of Japan, and every May, there is a performance of court dance and music held there. There is the Onda rice paddy which measures 2000 square meters where actual rice is cultivated without any pesticides in the hopes for a huge harvest. Aside from the honden on the grounds, there are many auxiliary and subordinate shrines that are related to Sumiyoshi-taisha.

The Goshogozen is a sacred area in the shrine. When Empress Jingu had searched for land to worship the great gods of Sumiyoshi, it is said that three white egrets landed in a cedar tree and it is this place where she worshipped them. There are small stones in the stone wall there which have the kanji characters for “five”, “big” and “power” written individually on them, and when they are collected and protected, the person will be endowed with strength, knowledge, wealth, fortune and long life and will have any prayers answered. At the conferment place in the honden, exclusive cases are sold

The Hattatsu Mairi, known as an original belief, is performed for prosperity in business and safety for the family. On the first Day of the Dragon every month, there is a customary pilgrimage to each of four subordinate shrines, and at the end of every 4 years, if the pilgrimage has been performed 48 times, prayers will be answered. At one subordinate shrine, Nankun-sha, the ornaments of shofuku neko (good luck cats) are popular as they raise their right paws on even-numbered months for wealth and their left paws on odd-numbered months to invite customers. 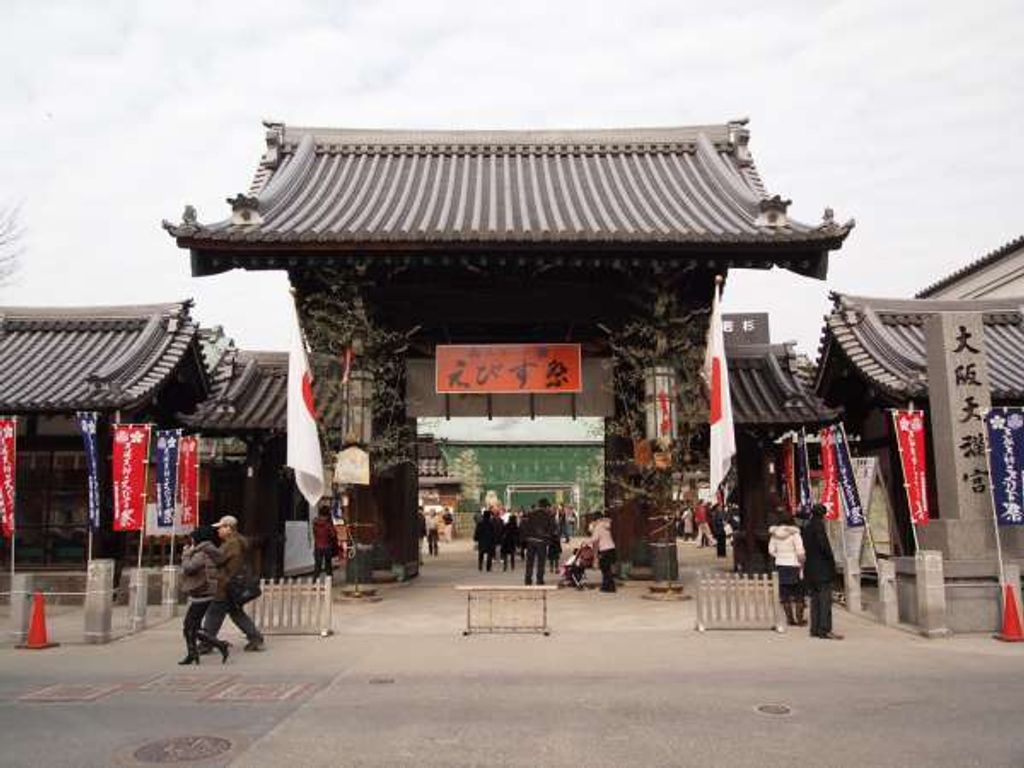 Osaka Tenman-gu is where Michizane Sugawara is enshrined. For the city of water, Osaka has the funatogyo (sea procession) and a fireworks competition at the 1000-year-old Tenjin Matsuri festival which are reminders of the Osaka summer.

Losing a bid for power at the Imperial court, scholar and politician Michizane Sugawara found himself demoted to the Dazaifu region but on his way there, he went to pray at Daishogun Shrine in what is currently the grounds for Tenman-gu. Following Michizane’s death in 949, Emperor Murakami heard rumors of a shining pine tree planted at that location and had Michizane enshrined at Daishogun which began Tenman-gu. At the time, with a trend of lightning strikes and epidemics occurring, it was thought that the ghost of Michizane was out for revenge, so in order to appease his spirit, he was deified as Tenjin-sama, the god of scholarship. Having been burned down 7 times in the past, the current honden main hall was reconstructed in 1843. The pelorus of the Chinese zodiac on the ceiling of the Daimon gate has the “tori” (bird) part not represented by a chicken as would usually be the case but by a phoenix. After a legend about Michizane being driven out by a chicken’s crowing came to light, the chicken was rejected from the pelorus. As the patron god protecting the Tenma area and as the god of learning and performing arts, the shrine has become a focal point for the local residents and the merchants of Osaka.

In 951, a kamihoko (sacred spear) washed up on the beach in front of the shrine, and later during a festival to hold a ritual at the funeral hall on that beach, there was a sea procession of boats (funatogyo) to see off the divine spirits which became the roots for the Tenjin Matsuri, and since then the 1000-year-old festival has become one of the three great festivals in Japan. Following the latter half of the 17th century, it has greatly flourished as a symbol of Naniwa prosperity. July 24th is the eve of the festival and on the 25th, the festival itself and the funatogyo are held. In the funatogyo, 100 boats traverse the Okawa River in a water parade. 5000 fireworks soar into the sky at the fireworks show during the festival which has also been called a festival of fire and water. Along the banks of the river, there are street stalls lined up and every year, the area is enlivened with many spectators.