Tokyo’s neon lights are something to see for those of you who don’t live in a modern asphalt jungle like Tokyo. They are on throughout the night 7 days a week, and they’re so bright it’s like the city doesn’t go to sleep at all. The lights of Tokyo are so bright they can be seen from outer space. And even if you do live in the city, night time in Tokyo can look a bit different than what you may be used to. The brightly colored advertisements plastering the vertical walls of almost all the buildings on the street have become a sightseeing spot of their own. You can see these neon lights up close and from afar, all around the city of Tokyo. However, below are 5 places that I recommend going to see. 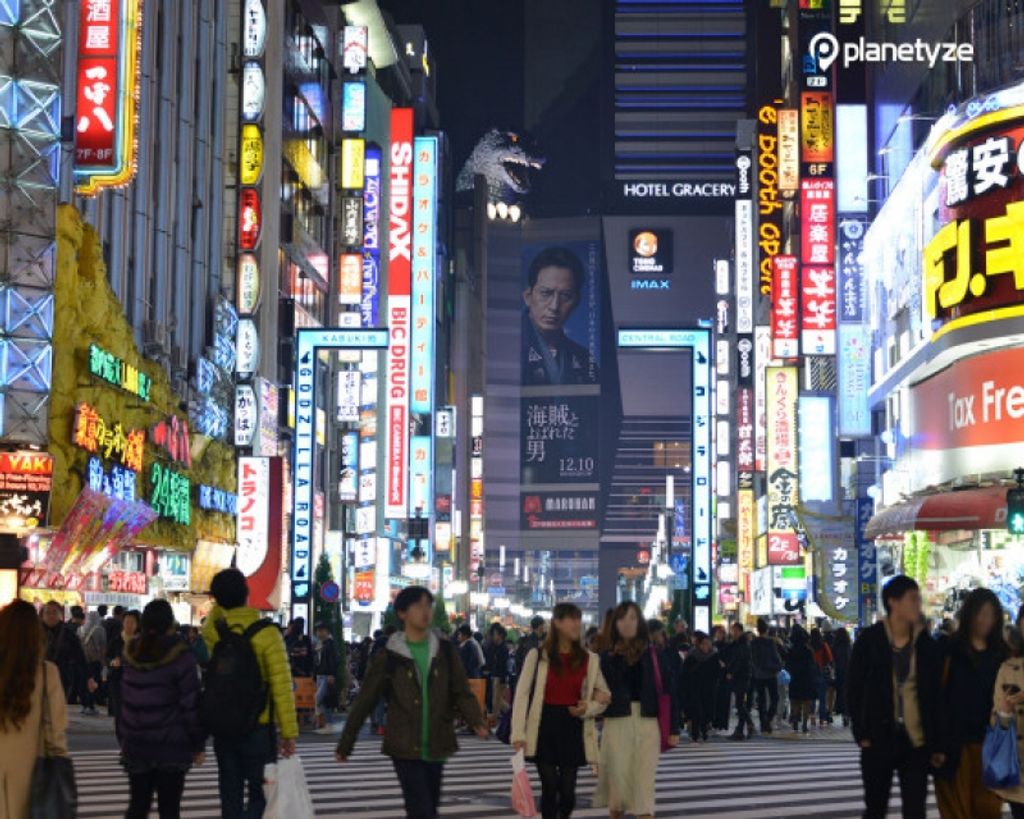 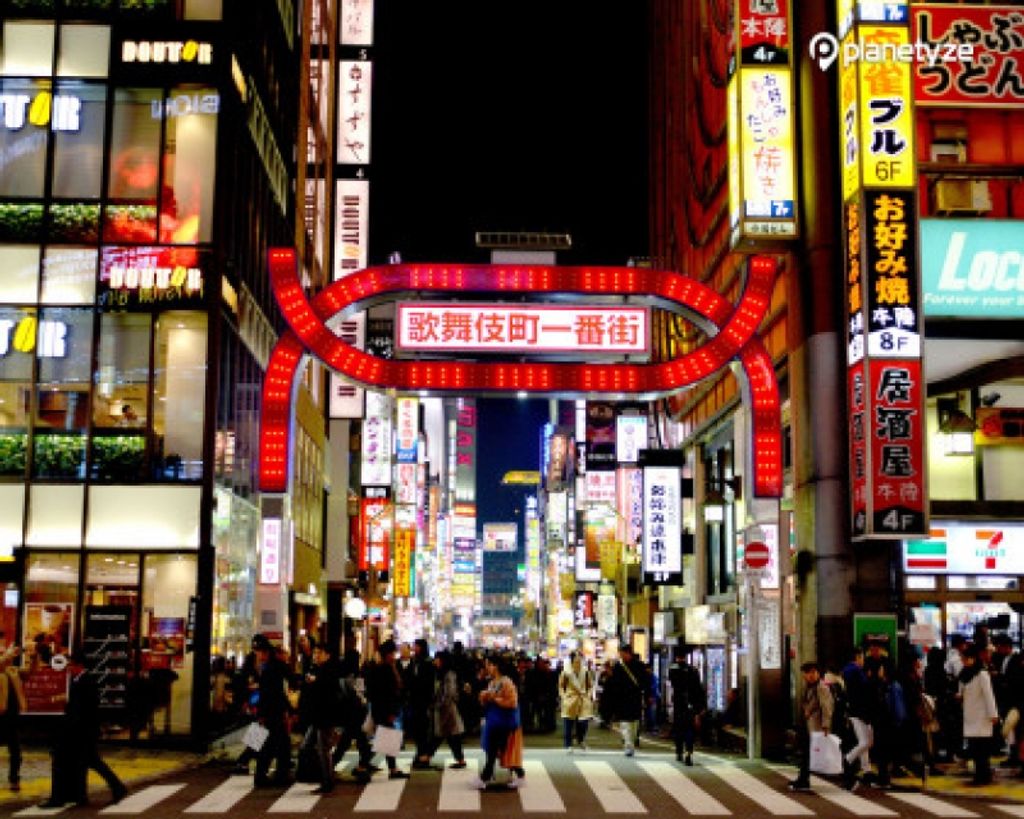 Shinjuku is probably the most famous place to see the neon lights of Tokyo. Just take one step out of the west exit of JR Shinjuku Station and you’ll see what I mean. There are neon lights everywhere. There are also crowds of people everywhere as this is a big terminal station in Tokyo and thousands of people pass through everyday. It’s also a convenient area where you’ll find just about anything.

There are several department stores, hundreds of restaurants, a few movie theaters, karaoke stores, a park “Shinjuku Gyoen” within walking distance, etc. So you can wander around this area for a whole day and still not have enough time to see it all. If you want to see the neon lights from above, go to the Tokyo Metropolitan Government Building Observatory. It’s on the top floor of a high rise about 10 minutes on foot from the station. And it’s free! 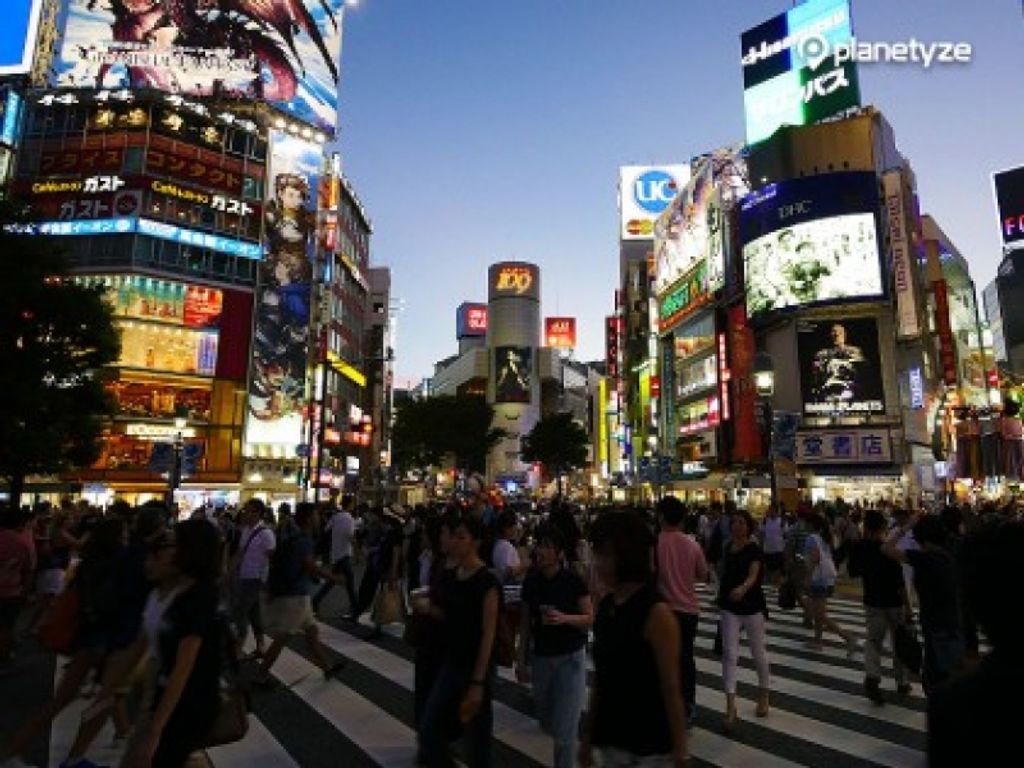 You may know about Shibuya for the famous crossing in front of the station. It’s amazing how hundreds of pedestrians can cross from each of the four corners of the intersection without it becoming total chaos. It may be a feat only the Japanese can pull off! If you see this phenomenon from above it looks like a carpet of moving people. The scene is quite spectacular when you see this at night with the neon lights in the background.

Shibuya is known as an area where the youth of Tokyo congregate. It’s situated next to the other famous center of pop culture, Harajuku, and you can walk between these areas in about 20 minutes. You’ll be able to find department stores as well as other cheaper stores targeting the younger generation. There are also lots of restaurants and “izakaya” restaurants which are Japanese restaurants that most Japanese people go to drink alcohol and eat a casual dinner. These “izakaya” restaurants are great places to try Japanese food, as they have all kinds of dishes prepared in small portions.

Ikebukuro is another area where lots of people gather, especially on the weekend. It’s also an area where you’ll find lots of “izakaya” restaurants and department stores directly connected to the station or in the near vicinity. If you’re going to visit Ikebukuro, you should remember to go to Sunshine City. This building is like a shopping mall, but not exactly. It also has a hotel, an aquarium, an observatory, and even a planetarium inside it. And for kids who like Pokémon, there’s a Pokémon center here where you can buy toys.You can spend a whole day inside without running out of things to do so it’s a great place to spend a rainy day. As for going to see the neon lights, you can do that from the observatory or just walking around the area looking for a place to eat dinner after dark. 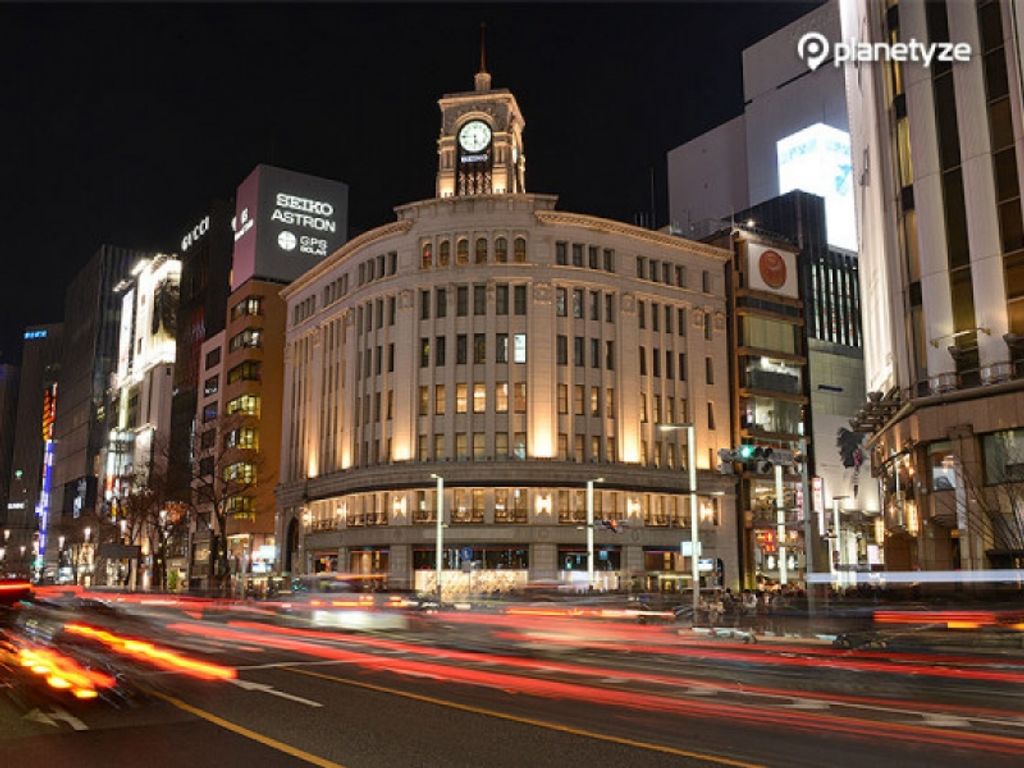 This area is a more sophisticated area compared to the first three areas above. There are department stores and places to eat, but it doesn’t seem so crowded or chaotic. It’s an area targeted toward adults rather than the youth. The distance between Yurakucho and Ginza is a mere 5 minutes on foot. Ginza is famous among foreign tourists for shopping opportunities. The department stores and boutiques are mostly filled with high-end brands, though you can also find huge fast fashion stores like “UNIQLO” or “GU”.

The center of this shopping district is Chuo Dori, a large street that is closed off to traffic from 12 - 5 pm on weekends. With no cars to bother them, the whole street becomes filled with pedestrians coming and going from the numerous stores that line the street for 8 long blocks. Take a stroll along this street after dark and the scene changes to a sight of lights from the neon advertisements lining both sides of the street and the cars slowly passing by between them. It’s a scene that will make you want to take your camera out and take a few shots. 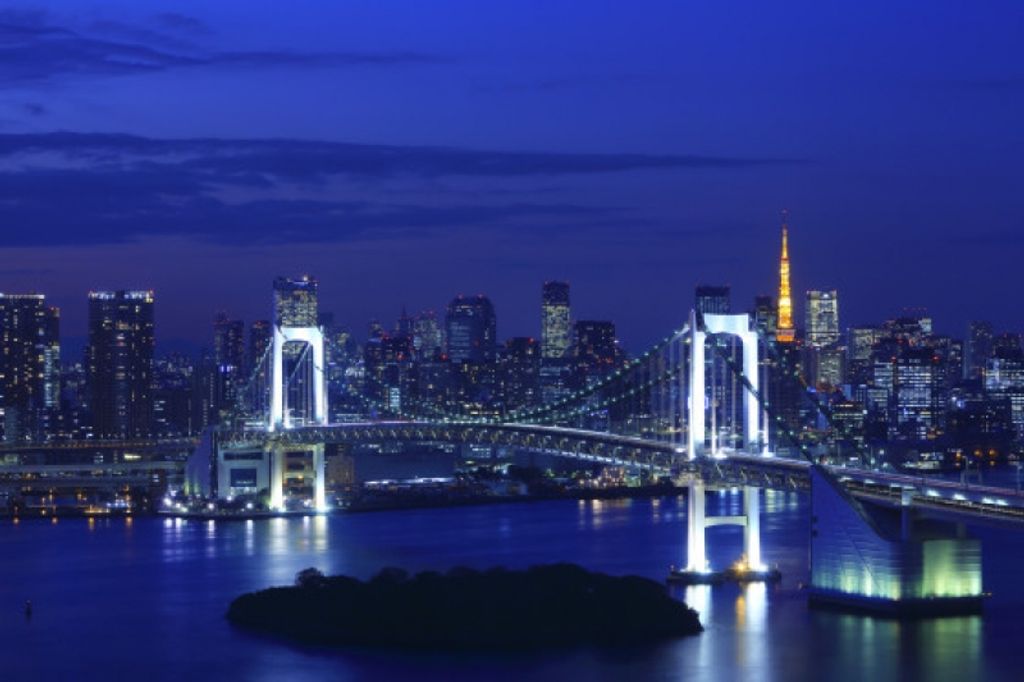 Odaiba is the bay front of Tokyo. It’s located on a man-made island in Tokyo Bay. You can access the area by subway on the Tokyo Rinkai Line or the Yurikamome Monorail, across the famous Rainbow Bridge. Almost everyone will say that the Rainbow Bridge is the symbol of the Odaiba area. But don’t be fooled, it’s not painted in rainbow colors as the name might suggest. It’s actually white. At night it’s illuminated by lights, making the night view of the bridge along with the neon lights of the city of Tokyo in the background a wonderful sight. During the special period from the beginning of December to the beginning of January, the lights become rainbow colored, thus making the “rainbow bridge” a reality. The promenade of the shopping malls facing the bridge are also decorated with illuminations and are a great place to take pictures.

Another night time specialty in Odaiba is the humongous robot “Gundam”. It stands like a guard to the entrance of “Diver City”, one of the shopping malls in Odaiba. It’s an awe inspiring sight which makes you feel tiny even in the day time. However, it’s even more amazing at night when it’s illuminated. The gigantic Ferris wheel attached to “Venus Fort”, another shopping mall, is also illuminated at night. It’s quite beautiful by itself. And it’s fun to ride on for the whole family, as you can view the Odaiba area from above. There are even seating cars that are totally transparent for those of you who want the added thrill of being able to see down below your feet.

What do you think about getting the most from your Tokyo trip? 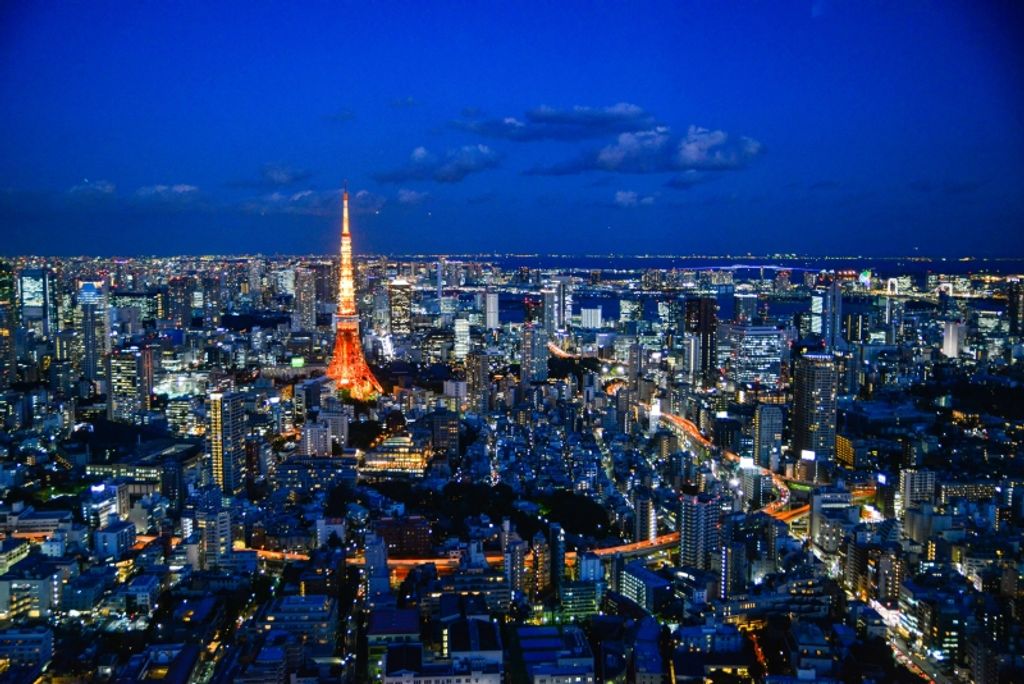 TripleLights is a service providing customers with the tour and guide which are the best match for them. You can look for guides and tours like on an internet shopping website.

All of the guides create their own tours of Tokyo so all of the tours are different. You can also send a message directly to the guide to ask questions or convey requests. Examples of this would be the length of a tour or the meeting spot or where you’d be eating lunch.

And if you don’t find the perfect tour on the list of tours, you can request a tour. For half a day, a full day or more, you can write exactly what you’d like to see or eat, etc. There are numerous guides for the Tokyo area and all of the guides will be able to see requests like this. The guides that are available during your requested dates will recommend a tour itinerary just for you. So you’ll be able to compare what several guides suggest and see which one looks to be the best for you. This way you can create your very own customized tour.

Most tours are walking tours and they’re made so that you can use the public transportation system while sightseeing and get a feel for the city’s layout. It’s an experience that will give you insight into how the local people move around during their daily lives. It’s also the easiest and most efficient way to get around Tokyo.  However, you also have the option of hiring a private car and driver for your tour. This is a helpful and convenient option for people with disabilities or elderly people who aren’t able to walk around the city for hours on end. Catching a taxi is also fine, but sometimes you just can’t find one, so having a car just for your use is pretty convenient, though expensive.

You can also take a look at the guides’ profile videos to see what kind of person they are and also see the reviews they got from other customers. This is an important step in choosing a tour. At most places, you aren’t able to choose your guide nor see what they look or sound like before the day of the tour. And you may have preferences about what kind of guide you’ll have like make or female, young or old. You’re going to be spending an entire day with them so having a pleasant companion during your tour is an important aspect of having an amazing day. So browse our website carefully and choose the perfect guide for you. I hope you enjoy your visit to the largest city in Japan, Tokyo.

9 Best and Most popular Tokyo Tours

15 Best Things to do in Tokyo

Asakusa: 9 Things to do

9 Best Things to Do in Harajuku

Plan your trip to Tokyo with Akane N.