My town festival called ”Ikazuchi Dai-Hannya” is held the 4th Sunday of every February. About 50 young and old men who dressed up like women with lipsticks and long robes, go around house to house saying “Omedito” and praying residents' perfect state of health.

The festival is held for 300 years at my town. It is the origin in old days a Buddhist priest distributed talisman and lucky charm, and walked all house in the town when cholera spread.  So there was less patients of cholera in town. The origin of the dragged-up bearers is said that in the Edo period an elder brother who wore his younger sister’s long robe drove away evil spirits for his younger sister who had tuberculosis. 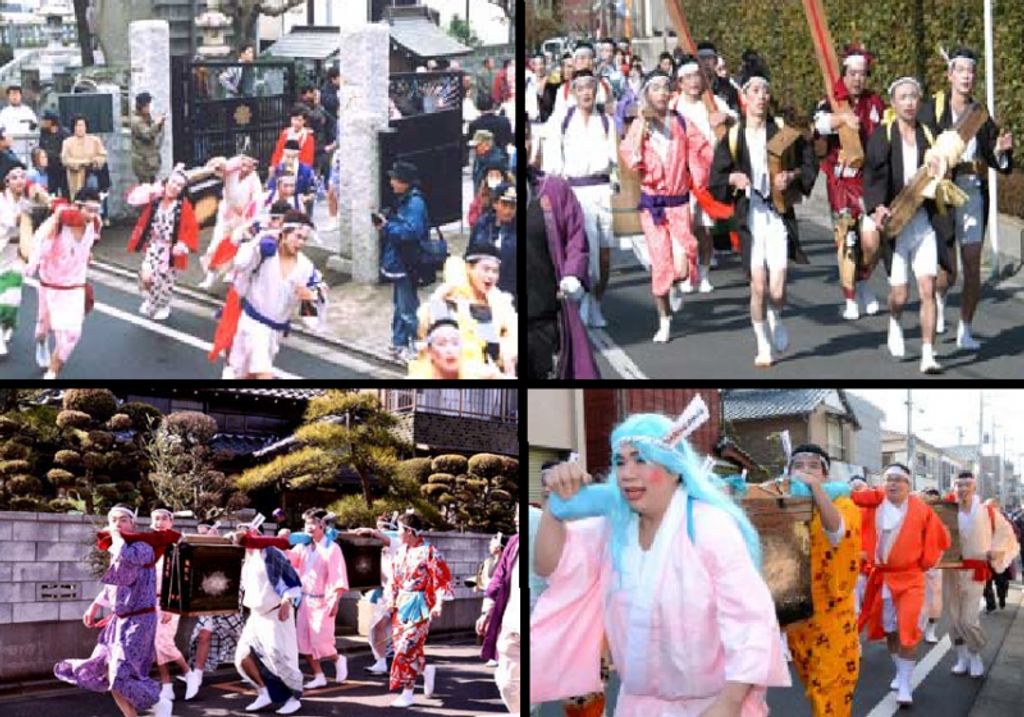 This year, 2018, the festival will be held from 9AM on February 25 Sunday at Shinzo-in temple at Higashi Kasai, Edogawa-ku,Tokyo, which is located about 15 min from Kasai-station of Tozai line.

As a member of town community association, I sometimes help to prepare “Ton-jiru” (miso soup with pork and vegetables) and serve to the bearers and audience right before the festival.

The following is the explanation about this festival introduced in Edogawa-Ku Home Page.

One which derives from damage's having disappeared when a chief bonze is encumbered with the Sutra of Great Wisdom, and "the Sutra of Great Wisdom of thunder" is surrounded each house when cholera spread in a the end of Edo period period. After that the youths my elder brother put on younger sister's long undergarment for my younger sister who had tuberculosis, and who were a trigger to have exorcized an evil spirit on the last day of an year, and did dressing up like a woman at present, a town, it started to course through. The local volunteer is also at 1:00 the said festival which stopped, to call, more, I restore about 40 years before. It's designated as ward designation intangible folk cultural properties in 1982, and it's held on last Sunday of February every year at present. Because it's held on the same day with an ordinary year and Tokyo marathon race, it's also called "back Tokyo marathon" at localness, town assembly private agreement 10km as well as a shout of "WASSHOI", it courses through freely.

About 50 men in 10-fifties who participate in a festival gather in Higashikasai thunder hall from early morning on the day. Powder is also applied the whole face with the one of the near beauty salon cooperation and the color is changed into a vivid long undergarment and the white tabi form including pink teak in deep red lipstick and cheek in blue eyeshadow and mouth in the special eyelid. A headband of Mameshibori dyeing is wound on a head and paper money is put in, and the yellow cloth by which a purification ceremony was done is wound on a wrist, and it's completion of preparations.

The youths who dressed up like a woman arrived at a meeting place with a sign of a drum by the departure system while giving "WO!" and a roar, and a cheer arose with big clapping from the surrounding audience. After having exchanged a few cups of liquor by the wine cask offered up and having encouraged by three final tightening, a party will hold "the Buddhist scriptures box" etc. with 600 reels of the "OHIYOUGO box" and Sutra of Great Wisdom pregnant with a spirit of the dead person and leave right away. The form of the resident who waits for a party at a front door with the celebration in one hand was seen here and there at a town, and the yellow cloth which received a purification ceremony as an offering of paper money and red and white rice cake and an amulet was handed over to a resident. A parishioner home hung one day, and was surrounded about 500 houses though it passed and hit the flank of the box with a stick of a bamboo, and a party prayed residents' perfect state of health.

If you plan to visit Tokyo, Japan, it would be a great pleasure to guide you. I will explain about our culture further. My tour website is https://triplelights.com/profile/3624

What is street art? What is the difference between street art and graffiti? According to Difference Between Net, an online dictionary, the biggest dif...

Is Japan "Obsessed" with Cleanliness?

"Why is Japan so clean and tidy?" This is one of the most frequently asked questions I get while working as a tour guide. Many foreigners are surpris...

Ukiyo-e is a genre of Japanese traditional printing which was established during the Edo period and became popular among ordinary people in the 17th C...

Many foreigners are visiting Cat Street. Why? Cat Street in Harajuku is a birth-place of various fashion trends. After World War II, there used to be...

Why Religion Plays a Small Role in Japan

One of the frequent questions I get from foreign travelers is, "What is the religion in Japan?" They are curious about Japan's religious culture. G...

Guided art tours introduce Japanese fine art to foreign tourists more intimately. Without a guide, they are not able to enjoy their museum journey. Th...

If you have time for lay-over of more than four hours at Narita Airport, this excursion is just right for you! In this layover tour, we are going to visit nearby Narita areas such as Narita-san, Shinshoji temple and picturesque shopping streets where you can feel traditional Japanese culture. You can also enjoy strolling along Omotesando Street wearing a Kimono. At the park, you can enjoy the cherry blossoms from late March to mid April.

Tokyo at a Glance Tour with Tsukiji Market

This tour is customized for travelers who are staying Tokyo for a limited time. Travel makes you a happier person by breaking routine, and providing new experiences and memories. I will make a tailor made tour, including major historical spots; Asakusa temple, modern sightseeing spots; Harajuku, Cat Street, Shibuya, and gourmet spot; Tsukiji Market, etc.

This "Momijigari" tour is to enjoy Japanese leaf coloring scenes. You can choose 3 autumn coloring spots including a trendy fashionable Cat Street in Tokyo. In accordance with your choice, I will make a proposed itinerary. Enjoying beautiful Japanese colorful nature and feeling some Japanese culture makes your Japan trip fruitful. The best season for this tour is late November to early December.

People who have special interest are able to dig their interests more while they are in Japan. I will start explaining Japanese history overall, the specific culture history and what is the essence of Japanese culture related their interest.

On your last day, if you have five hours to spare before going to Haneda Airport, contemporary art tour would be perfect for you. Let’s stop by Tennozu Isle which is near Hamamatsu-cho Mono rail station. Tennozu Isle area is now an Art Town surrounded by waterways. Also, you can venture into Tokyo's contemporary art world.This is a once-in-a-lifetime experience to many art-related facilities, such as art Cafés, Contemporary art galleries, Art Museums, Art painting material shops and so on.

Museum tours offer a unique way to experience art. First, participants can gain interesting perspectives which are useful for their work. Second, they relax and enjoy and feel refreshed after the tour. Japanese culture has unique characteristics which are different from the Western world. For example, Ukiyo-e or wood-block printing is a unique feature of Japanese culture that evolved during the 17th century.

Plan your trip to Tokyo with Mari.k K.