Sushi is now widely kown all over the world.

And the standard  form of Sushi is 'Nigiri-zushi,' which originated from  Edomae sushi(Edo= ancient Tokyo, mae= front).

For my future customer :) I would like to tell you a secret of Edomae sushi. 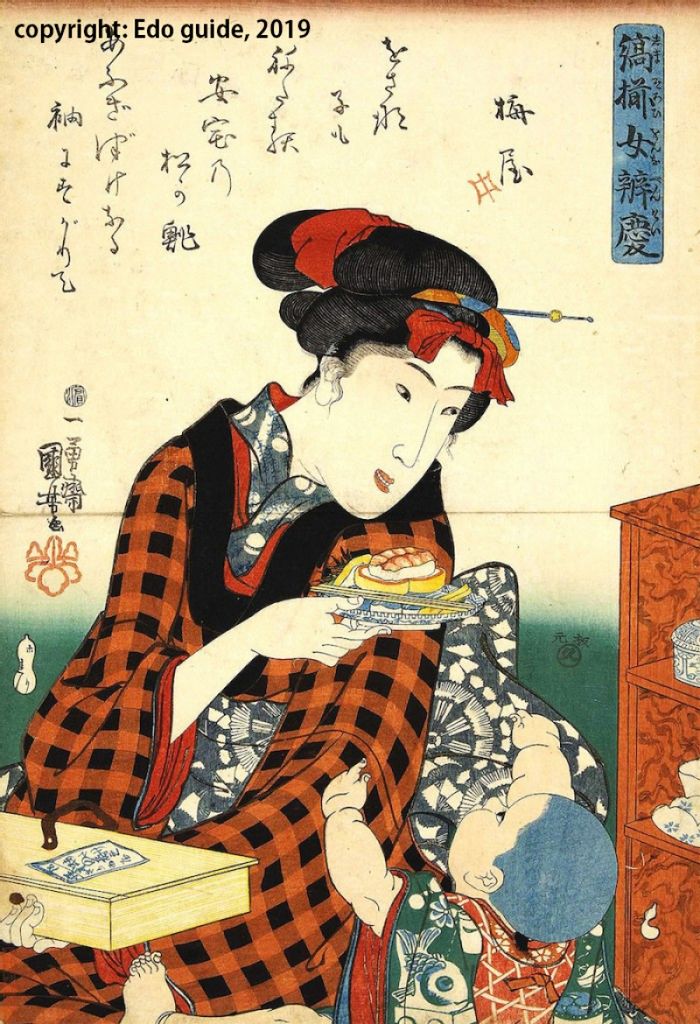 The birth of Edomae-sushi date back to early 19th century, the middle of Edo period. Until then, western-style suhi, Chirashi zushi in box or framented sushi as a preserved food were the strandards of sushi.

By using fresh sea food caught in Tokyo Bay, people in Edo had started selling small sized sushi with fresh seafood on the street.  As people in Edo were often reffered to as 'inpatient' or 'short-tempered,'  they loved this  portable, and easy to eat food.  Edomae sushi now become a world standard, but there is something missing, if compared with the original style of Edomae-sushi until the beggining of 21st century. 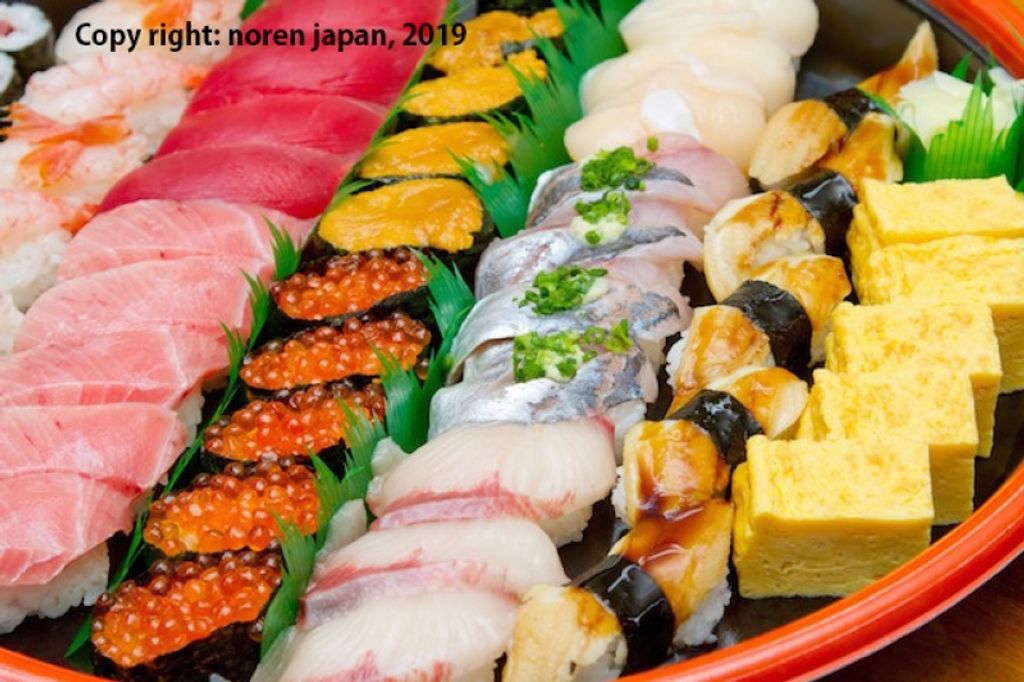 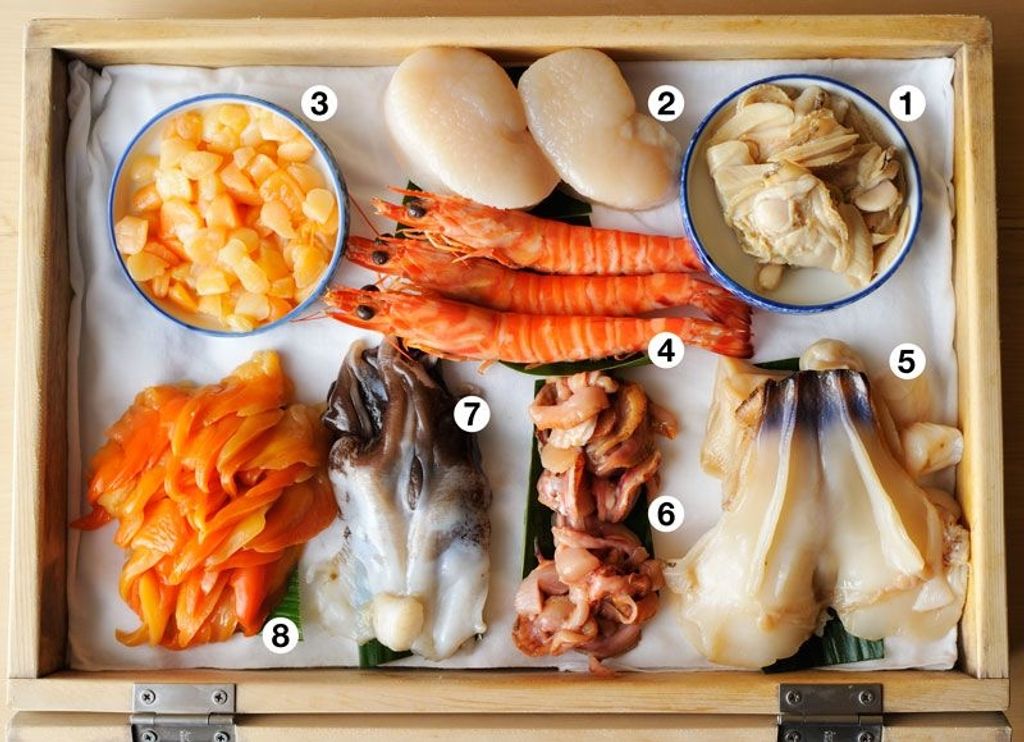 If you enter a sushi restaurant, where sushi chef is making sushi in traditional Edo style, you will find that the color of rice is brown.  You may think inside your head  'Oh my god, I chose wrong restaurant. They use dodzy, old rice...'

But it is not. I myself did not know this until recent years.   Traditionally, people in Edo used 'red vinegar'for Edo mae style Sushi.

Shari- this is how we call sushi rice, is usually fravored by white vinegar, sugar and salt. The white vinegar is made of rice or other grains. On the other hand,  red vingear is made of sake lees. In the process, they mature the liquid squeezed from sake lees by taking long time. As they matured, the color turned dark red- to almost black like soy sauce.

When they mixed it with rice, it has richer,  milder flavor compared with white vinegar. 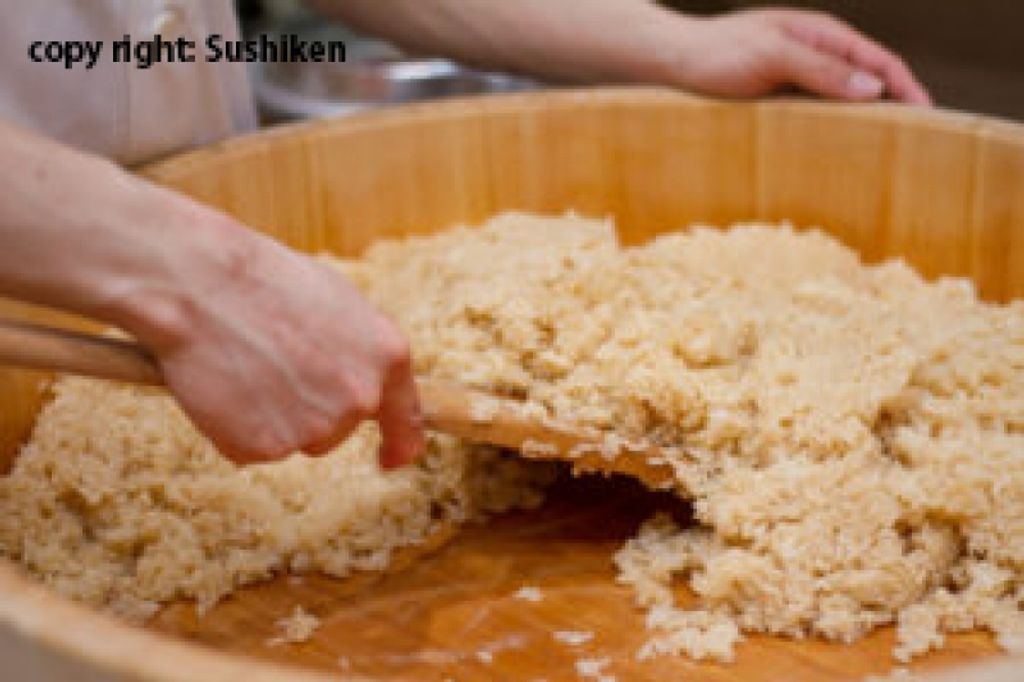 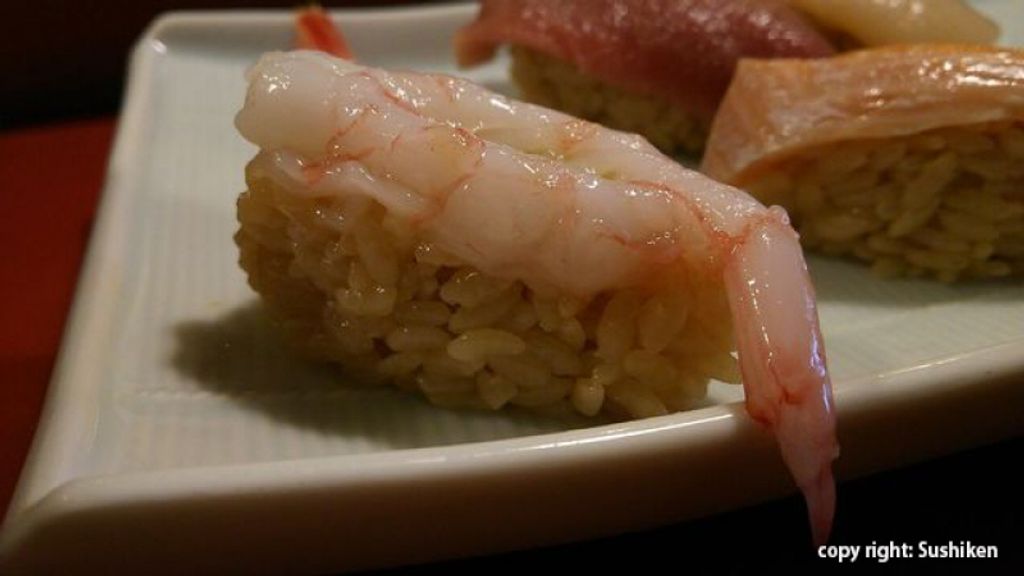 When I tried sushi with red vinegar for the first time, I felt something missing and even thought the taste was boring. It is because my tongue got used to sushi rice fravored by sharp white vinegar and lots of sugar.

However, after I left the restaurant I could not stop remembering that mild, subtle, but rich flavor again and again. When I tried normal sushi after several days, I was dissapointed with that.

As red vinegar itself has richer Umami ingredients in it, they do not need to put much sugar or salt when mixed with rice. Therefore, it enphasize the taste of fish and the Umami flavor stays long in your mouth. This was  interesting exprience in my life, my brain was confused and saying completely oppostie thing at the same time.

'No this is not what I expect from sushi rice'   and ' I want to try that taste again, I think it was most delicious'

Then my question is, why I never had have an opportunity to try this red vinegar rice over 30 yerars in Tokyo. This is because,  red vinegar production was lost once in early 21st century

Around the World War Two, the alchool was very precious and there was a period  when sake production was prohibited. Correspondanty,  the skill and production of red vinegar using sake lee was castaway for a while.  Nobody tried to revive it, until a large vinegar company in Aichi prefecture encouraged the revival of tradition. The distribution of red vingar is still limited now,  so I never seen it in the supermarket.

Yesterday, I had an opportunity to try Edo mae sushi with red vinegar for the second time. And I confirmed that red-sushi is trully delicious.  If you are sushi-lover, and travelling over to Japan, please use this opportunity to try authentic Edomae-suhi, and judge for yourself.

Please join my tour if you are interested in my blog and would like to know more cultural secrets. →

Today, I would like to introduce a success story of a man who brought himself up from a poor tenant farmer to a billionaire in early 20th century. Aft...

Matsuri - feel the spirit of Japan

Matsuri refers to festivals. There are numerous matsuri in Japan throughout the year. The original purpose of matsuri is to show thanks for the harv...

Sushi is now widely kown all over the world.   And the standard  form of Sushi is 'Nigiri-zushi,' which originated from  Edomae sushi(Edo= ancient T...

Although rice is our soul food, we cannot also stop loving breads.   When you feel like to grab a sandwitch, and drop by a bakery in Japan, you will...

Although I enjoy beautiful, unique, stylish design of products from all over the world, there are 2 categories of items, which I am pretty confident a...

Can rice make you a millionaire?

Can rice make you a millionaire?   The answer is yes, but if you were born in Japan between Edo-Meiji period.   Rice is the soul food of Japanese....

This is a half-day tour to enjoy the culture and lifestyle of Tokyo from 16th century(Edo)- to contemporary.You can see how the landscape has been transformed in Tokyo between 16th-21th century. Also, you can 'experience' the Edo culture by staying, touching, tasting, and viewing.Let's do a time trip together!You can start this tour anytime between 9:00 - 15:30.

Have you visited major tourist place already and want to do excursion without being bothered by tourist chaos? If so, come to Okutama! This mountainous are of the west side of Tokyo has all elements of Japanese culture. Shrines, temples, dry garden, traditional arts, pottery making, hiking routes, water sports activities, sake brewery and hot spring! I can make a customized tour for your choice.

The area nearby JR Enzan station called Kosyu(甲州) is the hometown of a famous samurai warrior: Shingen Takeda. It is just 1.5 hours by express from Shinjuku station. Here, you can find various kinds of onsen, wineries, fruit orchards, temples, hiking route with magnificent view towards Mt.Fuji and museums. If you stay in Tokyo more than 3 nights, switch one night to stay here!

Half day walk in Tokyo with '' Lady Musashino''

We are visiting Kokubunji-Koganei area (30mins from Shinjuku by train) walking from shrines, temples to hidden gardens in the fresh air. This is a quiet residential area with numerous water springs and native woodlands. The history and geology of this area is remarkable. You will be surprised how much clear fresh water flowing in this central Tokyo and ancient heritages integrated in modern life.

In this tour, the guide will create a special itinerary with mixture of major and minor spots according to the result of hearing from customers. I would rather choose places where locals love to visit in week-end.

This is a tour to visit Japanese gardens of your taste with an expert. With my background as a landscape designer, and personal experience to have visited more than 100 gardens all over the world, I can create a special itinerary of your best interests, season and access. I am also happy to make your dream 'Things to do in Japanese Garden' come true!

Plan your trip to Tokyo with Kaori O.