5 Things to do on a Day Trip to Nagasaki

If your Japan trip takes you as far as Kyushu, then be sure to stop off at Nagasaki. One of the best night views in the world is on offer here, along with historic ports, a mix of Chinese and Dutch culture, and of course, the famous Battleship Island. Here are just five ideas to boost your itinerary on your Nagasaki trip:

1. Take in breathtaking views at night 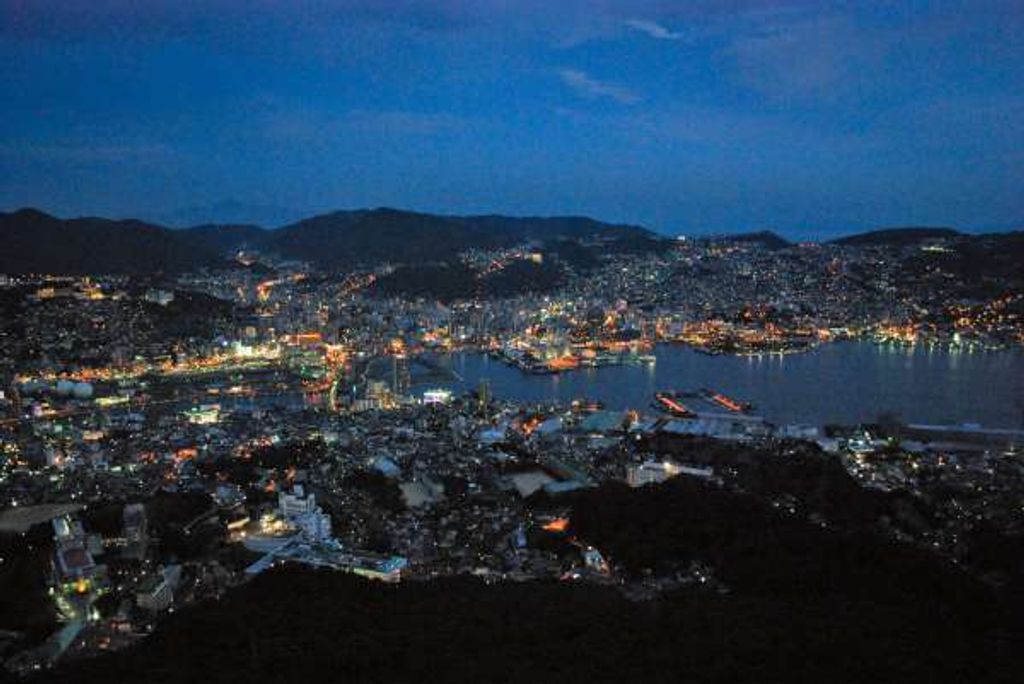 From Mt. Inasa’s observation deck, known as having one of the top 3 night views in Japan and in the world, you can view the beautiful nightscape of Nagasaki Harbor. The highlight is the huge 360-degree panoramic view.

Along with Mt. Hakodate in Hakodate and Mt. Rokko in Kobe, Nagasaki has one of Japan’s top three night views, and such a view from Mt. Inasa’s observation deck is well known. Furthermore in 2012, it was selected as one of the world’s new top 3 night views along with Hong Kong and Monaco. The view seen from Mt. Inasa is called the $10 million night view, and from the cylindrical-shaped View Tower which is covered all around in glass at the top of the mountain (alt. 333m), you can look at a 360-degree panoramic view. With the underground floor and the two levels above ground totally encased in glass, you can experience the night view at your own pace even in rainy weather, and the scenery from the open roof is spectacular. The afternoon scenery has a different feel, and with the Urakami River flowing through the city and plenty of undulating topography, your eyes can take in Nagasaki Harbor and Nagasaki itself, and if the weather is good, you can also see as far as the Goto Islands, Unzen and Amakusa. For those who want to see both types of scenery, coming just before sunset is recommended. There is also a restaurant on the observation deck where you can enjoy a meal and a drink while viewing the night scene. 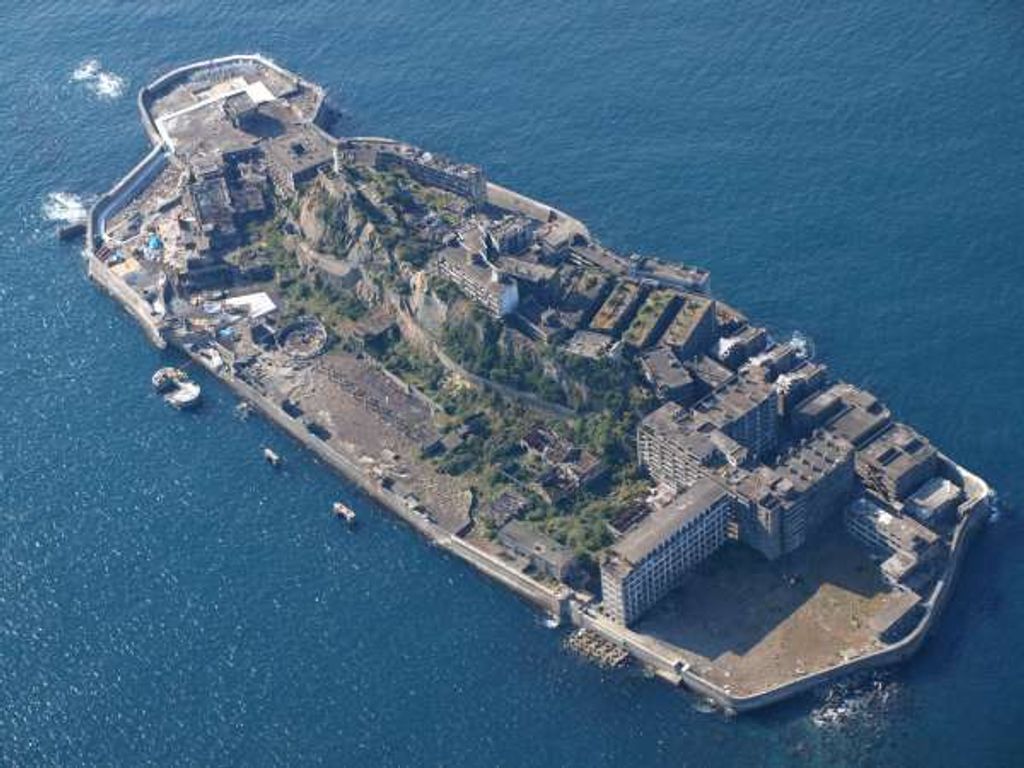 During the Golden Age of coal mining, people led a crowded lifestyle with a population density more than 9 times that of Tokyo. The life of those times has remained as it was on a deserted island of abandoned buildings left for 30 years.

Coal was discovered around 1810 on the island of Hashima, some 30 minutes away fromNagasaki Harbor by boat, and some 80 years later in 1890, Mitsubishi bought the rights for the mining areas for the entire island and began coal mining in earnest. The island was called Gunkanjima because its shape resembled that of a battleship. More than half the island was rich in ore, and the remainder was filled with hospitals, schools, temples, shrines, police boxes, movie theaters, barber shops, etc. so it functioned as a complete city.

During the high-growth 1960s, 5,300 people lived there with a population density that was No. 1 in the world and more than 9 times that of Tokyo. Utilizing cutting-edge technology, it was a near-future city channeling modern metropolises with Japan’s first high-rise reinforced concrete apartment buildings, an undersea water supply first invented by Japan, the nation’s first roof gardens, etc. But with the switch of the country’s main source of energy from coal to oil, there was a course of decline. In January 1974, the mine was closed and in April, all of the residents left the island, leaving Gunkanjima a deserted island. Since then, people had been prohibited from going onto the island, but from 2009, tourism and field trips were allowed.

Despite the presence of abandoned buildings, household appliances starting with TV sets and other traces of life have been left there as they were, with the island as a whole being left as it was during its prosperity, and one can feel what Japan was like during the period of high growth. There are some tour companies, and high-speed ships leave from Nagasaki Harbor. Due to the extreme danger from the concentration of decrepit reinforced concrete buildings on Gunkanjima, visits are performed by going around the island once by ship. Then, tourists go onto the island and with a guide, they can tour for about 1 hour. Since there are guides who can speak English, inquiry is necessary beforehand.

3. Enjoy a recreation of an old trading port 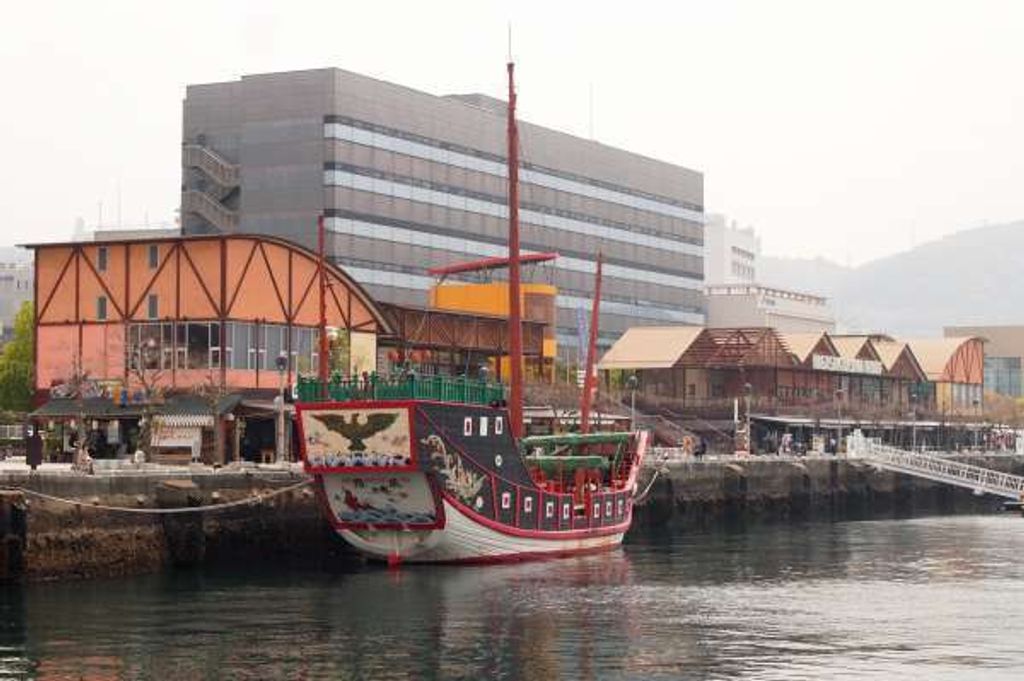 From 1550, Nagasaki was developed as a trading port with Portugal. However, the increase in followers of Christianity within the country and their unity was becoming formidable to the shogunate, and in 1634, the fan-shaped artificial island of Dejima was built over 2 years to amass and control the Portuguese in one area so as to prevent the spread of Christianity. Afterwards, the Portuguese were expelled from the country and for 200 years, trade and diplomacy between Japan and the outside world continued to be restricted as a policy of Sakoku. During that time, only Holland showed its loyalty to the shogunate, and gaining its trust, a Danish trading firm was moved to Dejima. During Sakoku, Holland became the only Western trading partner and the island played an instrumental role in the modernization of Japan as an exchange base for finance, culture and art.

Since 1900, the role of Dejima ended and its original form has been lost since the area around the island was filled up, but currently, there is construction to restore its historical legacy. At this time on Dejima, there are 49 buildings representing residences, dining rooms, warehouses, guard houses, etc. and 10 of them have been restored for visits. You can follow the changes in Dejimawhile viewing the remains over 4 eras such as the original Edo Era stonewall breakwaters where the Portuguese had lived, the closing days of the Tokugawa Shogunate when Ryoma Sakamoto and his followers were rebelling, Dejima’s stone warehouses after the opening of the country and the valuable wooden Western-style buildings during the Meiji Era. Avenues are recreated as if you went back in time, restored buildings have become museums, the history and lifestyle of Dejima are on display, and life at that time has been recreated. Access from within Nagasaki is excellent and there is a dining facility known as Nagasaki Dejima Wharf nearby with a fine view of the seaside where there are many places where you can try fresh seafood in Japanese, Chinese, and Italian establishments and cafes.

4. See the largest illuminations in the world 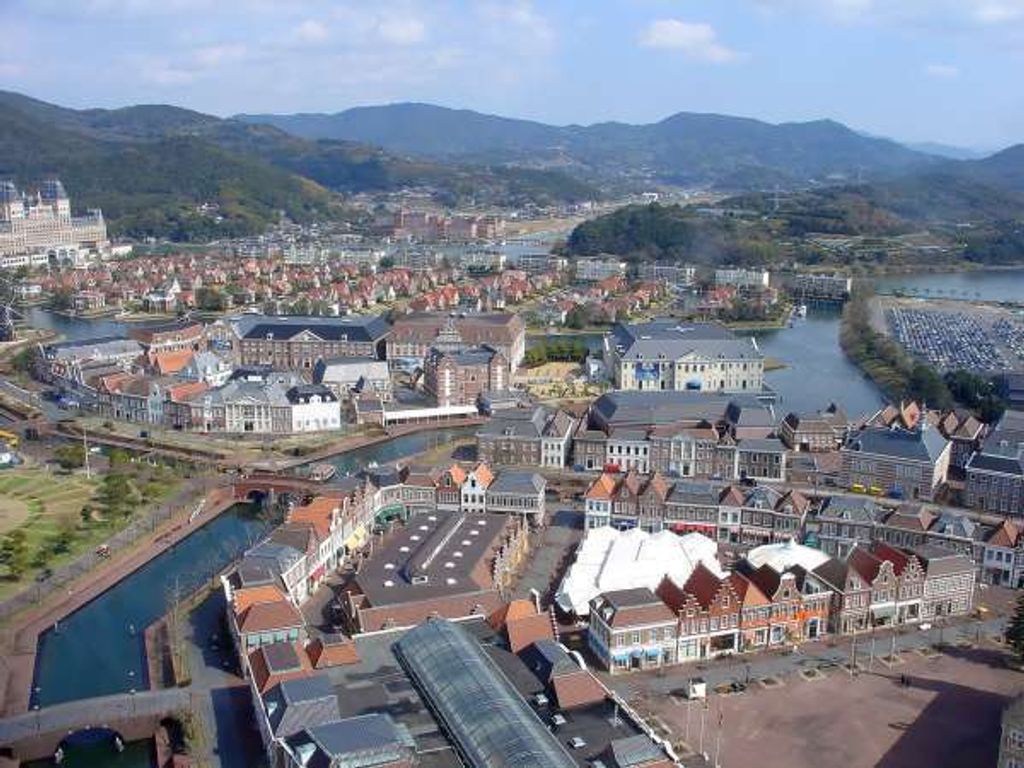 Huis Ten Bosch has been the leading tourist spot in Kyushu for domestic vacations for 2 years running since 2013. With its epic 1.5 million sq. m. of space and 6km of waterways and greenery, it is an amusement facility which re-creates the streets of Middle Ages Europe surrounded by flowers representing all 4 seasons. Huis Ten Bosch means “The House of the Forest” in Dutch, and it is a place where children and adults can enjoy attractions, museums, restaurants and hotels.  There are also the two great sights of the flowers and the illumination, and there are events such as the Japan preliminaries for the world competition for fireworks artists and collaborations with popular anime programs.

Within the huge grounds, various beautiful flowers are in full bloom during every season via events such the spring tulip festival which boasts the largest collection in the country, the moss phlox garden in April, the May rose festival with 1.1 million flowers of 1000 different types, the June hydrangea festival with 800 types which is the largest in Japan, the begonia garden from autumn to winter with 15,000 plants of 1000 types, and a winter orchid exhibition.

The Kingdom of Light, which is held from November to early April, is the world’s largest example of illumination whose 11 million lights light up the entire park. With canal cruises through waterways of light and fountains, unique light displays through events such as parades in which visitors can participate while riding bicycles, the lighting up of the palace and church, and 3D projection mapping at 3 different places, Huis Ten Bosch is one grand event. 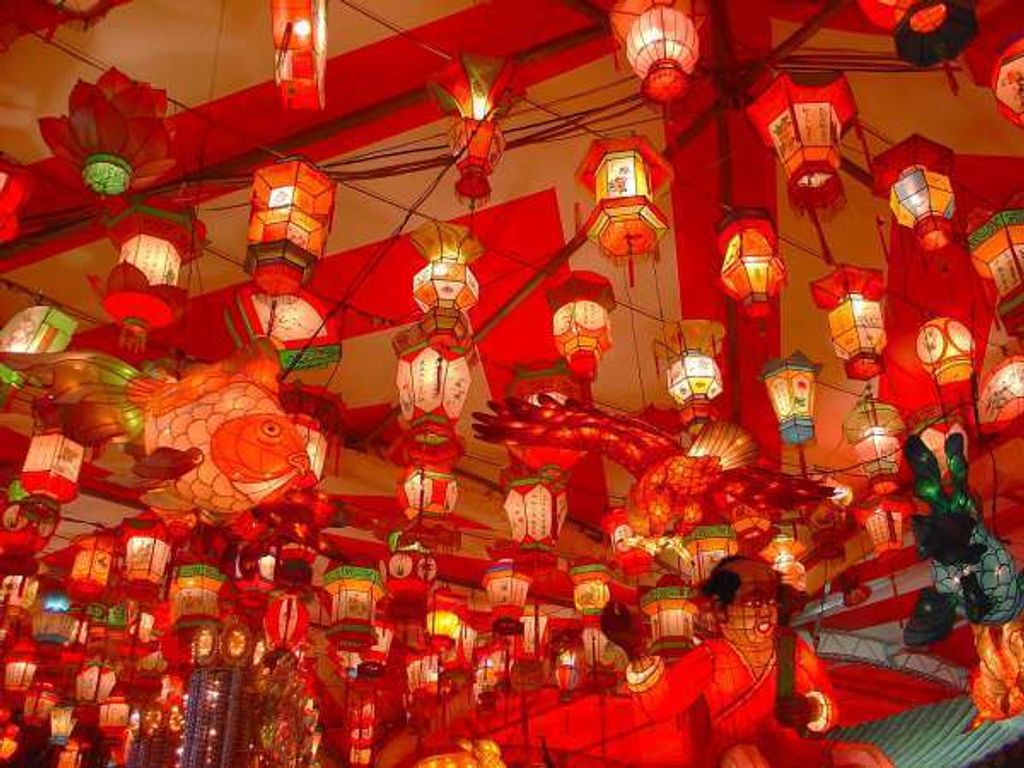 Nagasaki Shinchi Chinatown is one of the three big Chinatowns in Japan, standing alongside Yokohama and Kobe. There are brilliant chuukamon gates at the entrances in all four directions, and 250m into the area, there is a cozy crossroads where about 40 Chinese restaurants are located. The origins of Chinatown came from many Chinese people moving to this area due to the abandonment of Chinese settlements at the end of the Edo Era which had been built on reclaimed land for storehouses for trade products from China during the middle of that era.

A popular item in Chinatown is champon. A noodle dish from Fujian Province given a Japanese spin, the birthplace is said to be the restaurant Shikairou which was founded in 1899. It is a rich soup with thick noodles and plenty of vegetables and seafood on top. There are also other popular Nagasaki Chinatown dishes such as saraudon which is crispy deep-fried noodles topped with a thick champon sauce, and tonpourou (Dongpo Pork) which is gently simmered pork sandwiched into fluffy pao bread.

The Nagasaki Lantern Festival started in earnest from 2004. It was originally an event held by local Chinatown residents to celebrate the Chinese New Year, and currently it is a seasonal reminder that winter is ending. Annually, the Lunar New Year lasts 15 days from around the middle of February, and in the central areas of the city such as Nagasaki Shinchi Chinatown and the Hamanomachi Arcade, approximately 15000 Chinese lanterns decorate the streets. Starting from the main venue of Minato Park, every place that celebrates the event has huge lantern-like works of art modeled after the zodiac and historical figures from China. During this time, lively events such as parades, shows by Chinese folk art groups, Chinese lion dances, dragon dances and kokyu musical performances are held.

Plan your trip to Nagasaki