Ukiyo-e is a genre of Japanese traditional printing which was established during the Edo period and became popular among ordinary people in the 17th Century. Ukiyo-e prints also had an especially great influence on Impressionists, such as Vincent van Gogh and Paul Cezanne. This movement is called “Japonism.”

Let me start with its historical background. In the late 17th Century, under the peaceful reign of Tokugawa shogunate, merchants, who were the lowest class of the social hierarchy, became wealthy.

During that time, children of common people studied reading and writing at Terakoya schools operated by Buddhist priests. At that time, Japan’s literacy rate was more than 50％ which was the highest in the world, while England was at 14%. As many people were able to read and write, they were interested to know what’s happening and purchased wood-block print newspapers called Kawaraban.

Ukiyo-e prints are woodblock templates that are used to reproduce more than 2,000 copies from the original wood block set. In the Edo-period, common people were able to purchase this work at an affordable price. In contrast, Impressionists in Europe created their artworks one at a time and sold them at an expensive price usually to the upper class.

The evolution of Ukiyo-e prints can be traced from black and white prints that portrayed prostitutes entertaining wealthy clients. Then came the colored depiction of slender beauties to promote courtesans. When Kabuki plays became popular, people purchased Ukiyo-e portraits of Kabuki actors.

In the early 19th Century, people became wealthy enough to travel, and Hiroshige who was one of the notable artists of his time, drew a series featuring the 53 stations of Tokaido. Then Hokusai, who was behind one of the most famous Ukiyoe, The Great Wave, rendered 36 views of Mt. Fuji.

You might be interested to know how Impressionists crossed paths with Ukiyo-e prints. Around 1865, Blacquemond who was an Italian copperplate painter, found Hokusai manga in the cushion of Japanese ceramic packages. He then shared it with his fellow Impressionist artists. Two years later, the second Exposition Universelle was held in Paris. At this event, the Japanese government displayed more than 200 pieces of Ukioye. Many artists purchased Ukiyo-e as they had heard about it from Bulacquemond. By selling them all, the Japanese government earned foreign money.

And after several years, Ukiyoe art spread to other countries and started to influence European artists. This movement is called Japonism. Among those artists were Claude Monet, Vincent van Gogh, Pierre-Auguste Renoir, Edgar Degas, and Paul Cezanne.

Have you ever wondered why Ukiyoe attracted Impressionists? The following painting is one of Remoir's famous works called Charpentier Wife and Their Children. He painted it for his patron, Mr. Charpentier, who was a member of the upper class. On the other hand, Hokusai depicted Mt. Fuji and manual laborers like woodcutters and coopers in most of his works. As Ukiyo-e described the daily life of common people, Impressionists found it innovative and offered great degree of artistic freedom, unlike paintings commissioned by upper class patrons who usually dictated Impressionists how to do their work.

Many people may not be aware of this, but Van Gogh was a Ukiyoe enthusiast. In fact, he owned about 500 Ukiyoe prints. He held Hiroshige's prints in high regard and reproduced oil paintings imitating Hiroshige's style and adding his own vision to them.

Impressionists were inspired by Ukiyoe's dynamic layouts and crisp color usage. Notably, Hokusai's use of perspective influenced many Impressionists.

Is it a coincidence that Paul Cezanne’s design is very similar to Hokusai’s Ukiyo-e of the tea plantation which was printed 50 years earlier? 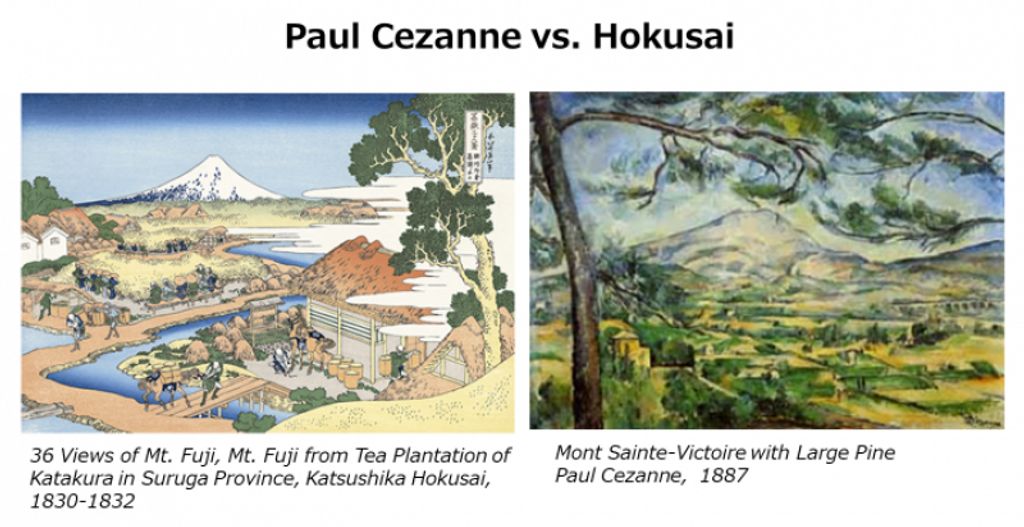 Moreover, many Impressionists used Hokusai Manga's sketches of people as inspiration for their works. For example, Edgar Degas' Dancer resembles Hokusai's Sumo Wrestler. What do you think? Aren't the similarities striking? 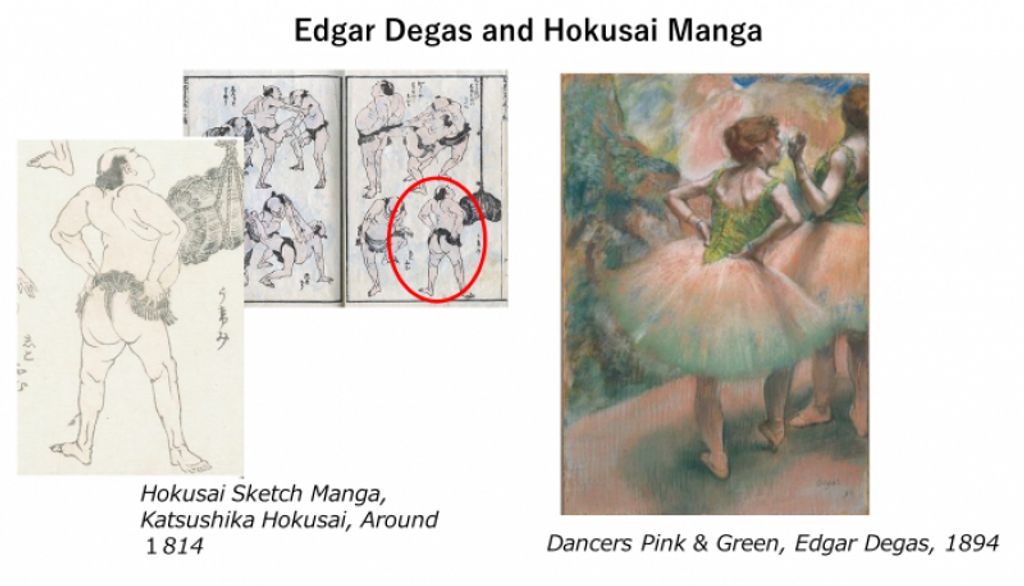 So now, you can understand why Ukiyoe made a huge impact to Impressionists. As I've mentioned before, Hiroshige and Hokusai influenced Impressionists because their works used a dynamic design, crisp colors and awe-inspiring color gradation that brought innovation, excitement and freshness to the world of visual arts.

I hope that you can not only appreciate Ukiyoe prints but also experience them, just as they captivated Vincent Van Gogh, Paul Cezanne, Claude Monet, Edgar Degas and Renoir and many others.

If you plan to visit Tokyo, it would be my great pleasure to guide you. I will explain to you Ukiyo-e further. My tour website is https://triplelights.com/profile/3624

What is street art? What is the difference between street art and graffiti? According to Difference Between Net, an online dictionary, the biggest dif...

Is Japan "Obsessed" with Cleanliness?

"Why is Japan so clean and tidy?" This is one of the most frequently asked questions I get while working as a tour guide. Many foreigners are surpris...

Ukiyo-e is a genre of Japanese traditional printing which was established during the Edo period and became popular among ordinary people in the 17th C...

Many foreigners are visiting Cat Street. Why? Cat Street in Harajuku is a birth-place of various fashion trends. After World War II, there used to be...

Why Religion Plays a Small Role in Japan

One of the frequent questions I get from foreign travelers is, "What is the religion in Japan?" They are curious about Japan's religious culture. G...

Guided art tours introduce Japanese fine art to foreign tourists more intimately. Without a guide, they are not able to enjoy their museum journey. Th...

If you have time for lay-over of more than four hours at Narita Airport, this excursion is just right for you! In this layover tour, we are going to visit nearby Narita areas such as Narita-san, Shinshoji temple and picturesque shopping streets where you can feel traditional Japanese culture. You can also enjoy strolling along Omotesando Street wearing a Kimono. At the park, you can enjoy the cherry blossoms from late March to mid April.

Tokyo at a Glance Tour with Tsukiji Market

This tour is customized for travelers who are staying Tokyo for a limited time. Travel makes you a happier person by breaking routine, and providing new experiences and memories. I will make a tailor made tour, including major historical spots; Asakusa temple, modern sightseeing spots; Harajuku, Cat Street, Shibuya, and gourmet spot; Tsukiji Market, etc.

This "Momijigari" tour is to enjoy Japanese leaf coloring scenes. You can choose 3 autumn coloring spots including a trendy fashionable Cat Street in Tokyo. In accordance with your choice, I will make a proposed itinerary. Enjoying beautiful Japanese colorful nature and feeling some Japanese culture makes your Japan trip fruitful. The best season for this tour is late November to early December.

People who have special interest are able to dig their interests more while they are in Japan. I will start explaining Japanese history overall, the specific culture history and what is the essence of Japanese culture related their interest.

On your last day, if you have five hours to spare before going to Haneda Airport, contemporary art tour would be perfect for you. Let’s stop by Tennozu Isle which is near Hamamatsu-cho Mono rail station. Tennozu Isle area is now an Art Town surrounded by waterways. Also, you can venture into Tokyo's contemporary art world.This is a once-in-a-lifetime experience to many art-related facilities, such as art Cafés, Contemporary art galleries, Art Museums, Art painting material shops and so on.

Museum tours offer a unique way to experience art. First, participants can gain interesting perspectives which are useful for their work. Second, they relax and enjoy and feel refreshed after the tour. Japanese culture has unique characteristics which are different from the Western world. For example, Ukiyo-e or wood-block printing is a unique feature of Japanese culture that evolved during the 17th century.

Plan your trip to Tokyo with Mari.k K.