If you think something wrong with a pagoda in a shrine, you know about Japanese religion well. That's right, a pagoda is a tower to store the ashes of Buddha's bone, formaly at least. This related to the movement in Meiji period to separate Shinto shrines from Buddhist temples. Dewa Sanzan was first opend as a Buddhist temple in 593 when Japan was barely estaburished as a nation. During Edo period, this temple had very strong political power when the five story pagoda was built. There was a shrine in the same area which was very common in those days in Japan. But in Meiji period, Buddhist temples including this temple were forced to become Shinto shrines due to the power of Emperor and many Buddhist statues were destroyed. It was very fortunate that the five story pagoda was not destroyed. 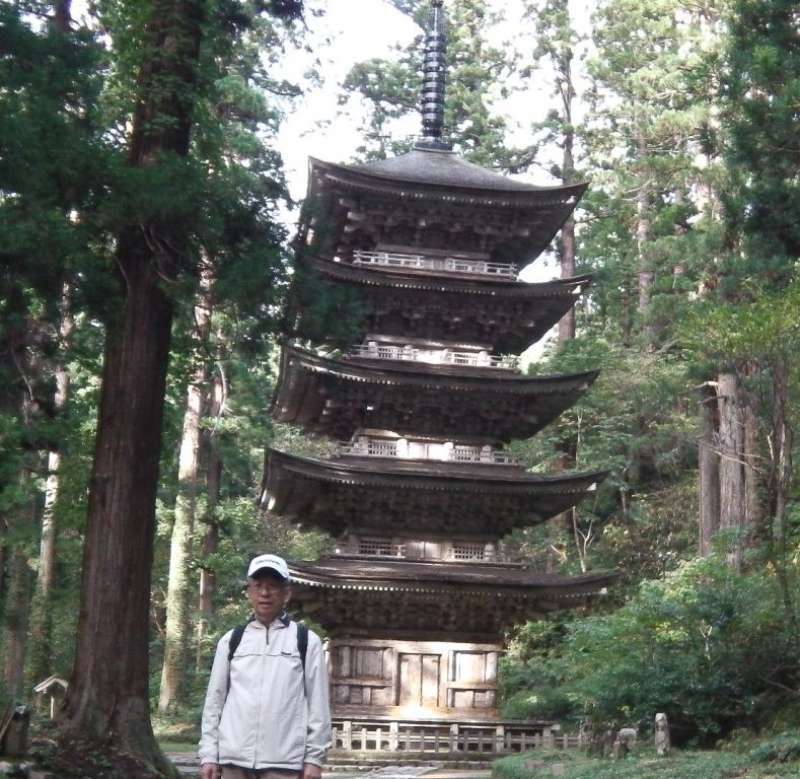 Long slope of steps toward the main shrines (Michelin ★★★)

We went to this shrines on Oct. 21st, 2016. We walked in a forest from the entrance gate of this shrine for 1 hour and 30 min. until we arrived at the main shrines area. There are so many steps for 2 km long, they may be more than 4000 steps. There are several buildings we thought we arrived at last but it was not the one. There is an easy short cut by a car but you will miss the pagoda and it is the purpose of visiting a shrine to walk from the entrance to the main area to find yourself. 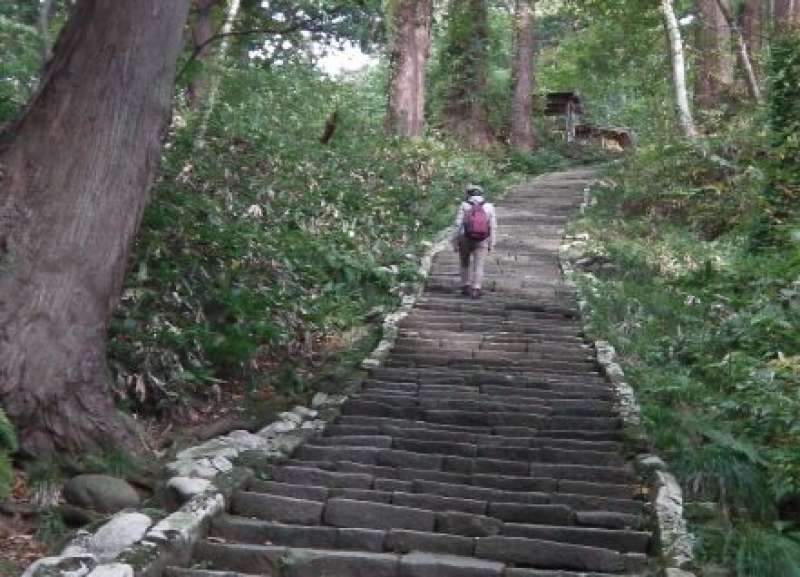 We arrived at the main area of the shrines. The three mountains are Mt. Haguro, Mt. Gassan and Mt. Yudono meaning "Black feather, Moon mountain and Bath mountain ". The last one is very unique and I will report separately later. Other than the three, there are small sanctuaries of all of Japanese shrines I know of, it's like a sanctuary of sancuaries. 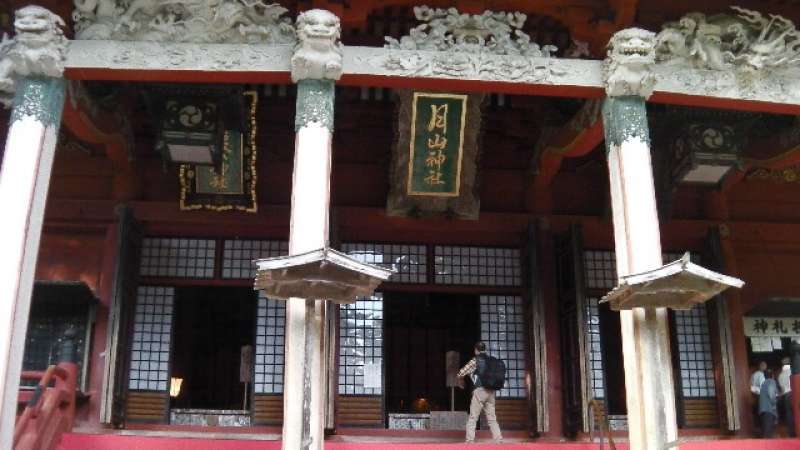 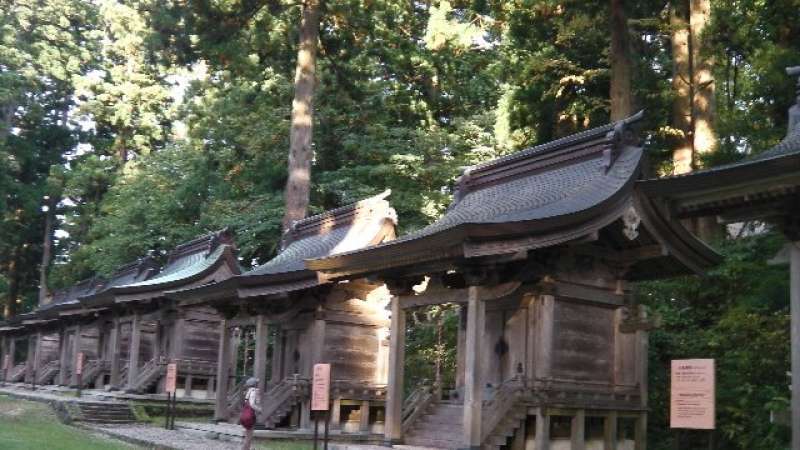 Staying at Shukubou, a lodge for ascetic people

There are many Shukubou near the entrance of the shrine. We stayed one of them which was very confortable and interesting place.

We enjoyed delicious dinner called "Shojin cuisine" composed of wild plants ,vegetables and fish. We attended in the morning ceremony of Shinto performed by the master of the lodge who is a ascetic person. 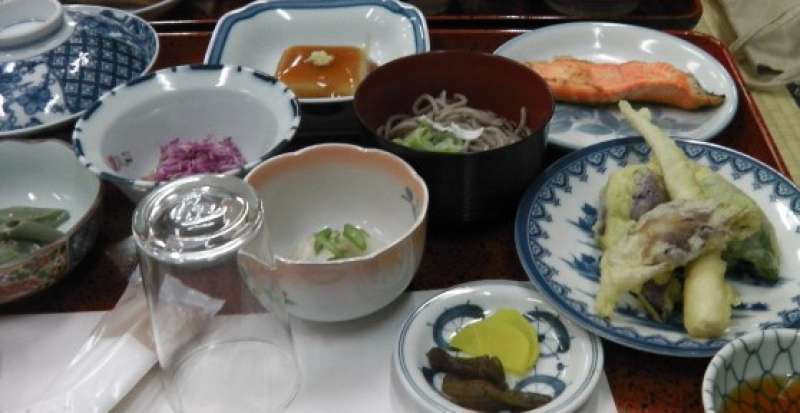 It takes about 5 hours from Tokyo to the shrine either by Shinkansen or an airplane. Its location is shown as Mt. haguro in the map of Japan below. If you want to visit here, I can arrange a 2 day tour from Tokyo: Two day exploration of Dewa Three Mountain Shrine from Tokyo 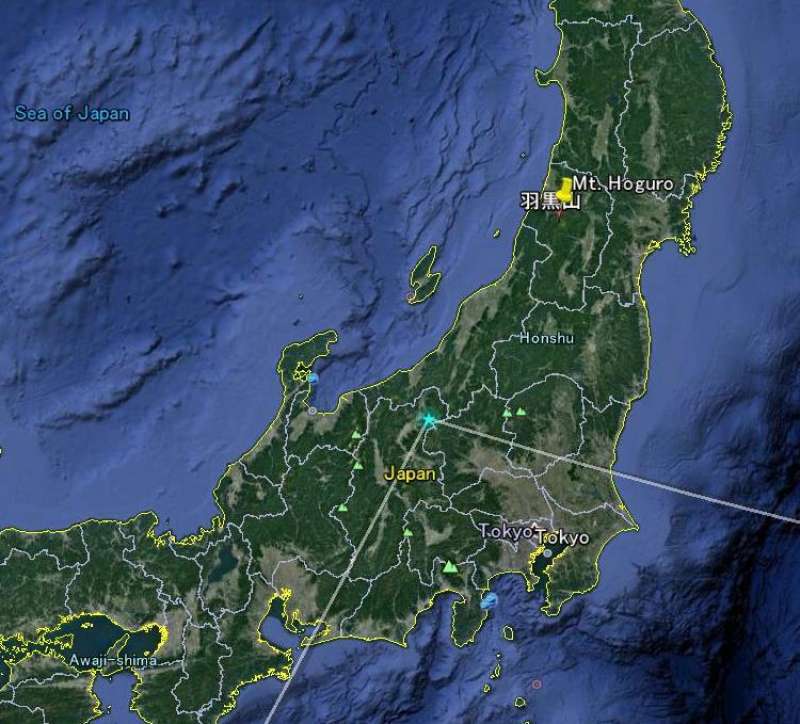 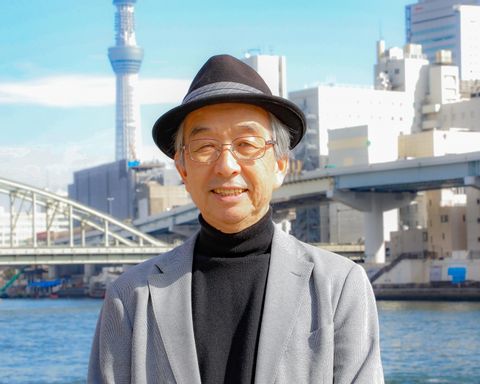 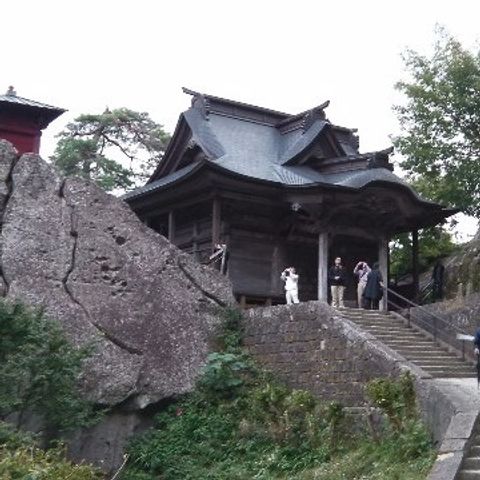 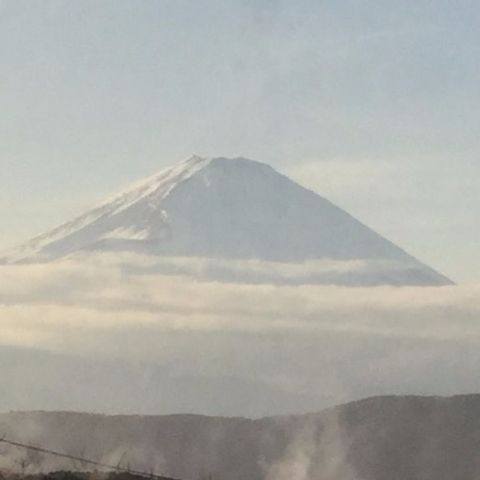 by Yuki
I visited Hakone on Nov. 26th with my guests from Philippin. We enjoyed the speed of Shinkansen at Odawara station as usual but we were scol... 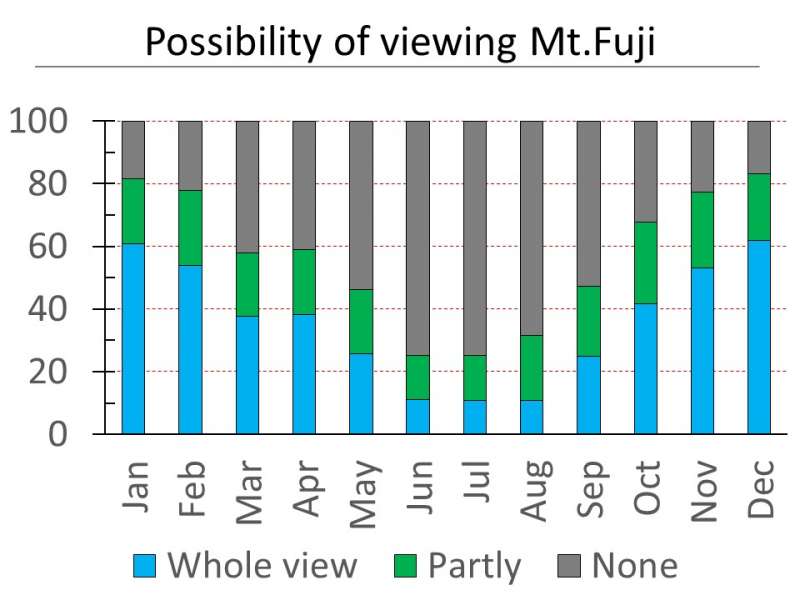 When is the best time to view Mt. Fuji from Hakone?

by Yuki
Possibility of viewing Mt. Fuji Winter is the best time to view Mt. Fuji as the possibility of her whole view is higher than 50% and Hako... 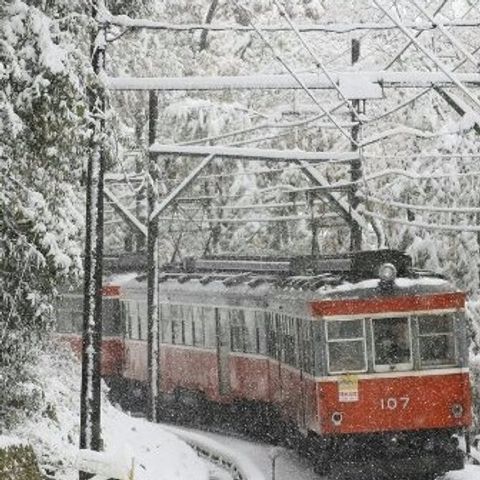 Snowy day in Hakone, we managed to return at last !!

by Yuki
I went to Hakone on Nov. 24th with my guests from Florida, USA.  It snowed in Tokyo after 54 years in November and it is a record in the his... 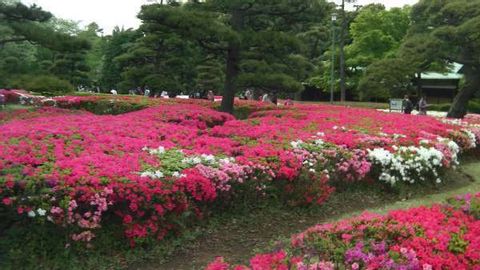 Flowers in the east garden of the imperial palace

by Yuki
The cherry blossom season has almost finished but there are many beautiful flowers comming to bloom one after another or all together. I hav... 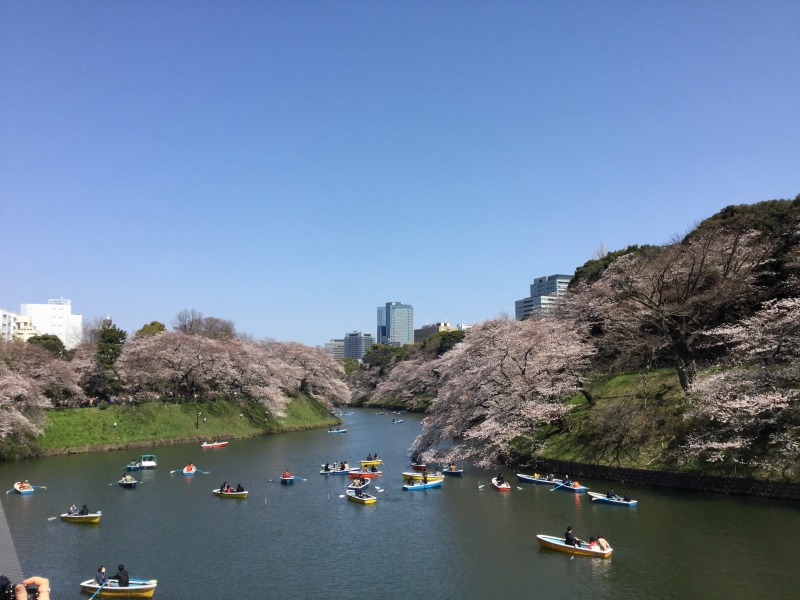 When will be the best time for viewing cherry blossoms ?

Plan your trip to Tokyo with Yuki

An awesome day in Kyoto followed by some Tokyo highlights .. Yuki was an awesome guide - very knowledgeable, knew the best restaurants, public transport system, Japanese history and culture .. we enjoyed an awesome 2 days with him :) Thanks !
read more

We had an excellent day with Yuki. He was very well organised and prepared a very nice full day itinerary for our family. He organised Passmo travel passes for us all and navigated us around the Tokyo metro and rail network with ease. We visited Meiji Shrine, Imperial Palace Gardens and Senso-Ji temple. As a special treat for our girls (8 and 10 yo) he took us to a Owl cafe where we could have a h...
read more

“ Up close and personal Hakone ”

Yukie was an awesome guide taking us to Hakone from our Hotel in Tokyo. He was smart and very personal. I would highly recommend Yuki!
read more

The weather was unpredictable but we would, as a result, have appreciated the guide to have been more flexible and client responsive. Information lacking on geology of the region, artists and architect of the Picasso museum. I have no doubt the guide will be of more value for a city tour!
read more

Yuki was an exceptional and patient guide who balanced being attentive and supportive for our family with young children. Day was very smooth and we enjoyed it all considerably. Thank you for a great experience Yuki!
read more

We had a wonderful day with Yuki!! He met us at our hotel and arranged a Tea Ceremony with Kimono dress at Asakusa. We walked around Asakusa, had delicious Ramen for lunch then visited the Senso-Ji Temple and Wales through the markets and shopping areas. We tasted some traditional Japanese deserts and saw the Owl Cafe. Yuki then took us back to our hotel. Yuki was a wonderful host we are looking f...
read more

“ Great Asakusa and Sumida river, and Kamakura tours with Yuki ”

Our group of 2 couples enjoyed our tour with Yuki for this tour to Asakusa, river cruise and more. We even added an hour for a quick Ginza stop. He helped us make the most of our time and we also went on a full day at Kamakura with Yuki. He is a retired nuclear engineer and well spoken. He provided us with on-point information and kept a good pace.
read more

Yuki did a great job organizing a very memorable day for our family of four in Kyoto. He kept us focused, and on time but always took the time to explain things to our very diverse group. He is very knowledgeable and enthusiastic. Lunch was fantastic - very authentic. The day went off without a hitch. My only regret was that we tried to do too much in a single day - there was much more that ...
read more

Yuki was such a great guide. He helped me navigate the trains all over the city taking me from East to West, North to South! He was such a great source of information about the city, its history and Japanese culture. I very much enjoyed my day and highly recommend Yuki as your guide!
read more